Now they have joined forces under the Origin banner to rethink their original concepts and create “the most advanced and impressive array of architectural loudspeakers ever available,” as they state. During the Integrated Systems Europe 2015 show, in Amsterdam, the company also made clear they intend to lead the market again and change the way CE specialty retailers and integration dealers do business.

Origin showed a complete range of in-wall / in-ceiling models - now shipping. Their brand new catalogue differentiates from existing products by using with smaller footprint designs, clever installation details, new patent-pending technologies and vertically integrated components. Several subwoofers and outdoor speaker models, together with amplifiers, controllers and switchers complement Origin’s new catalogue. In Amsterdam, the company stated that “over 100 products were created; each with its unique fit and purpose to offer dealers a comprehensive brand and a simplified and more profitable way of doing business.” 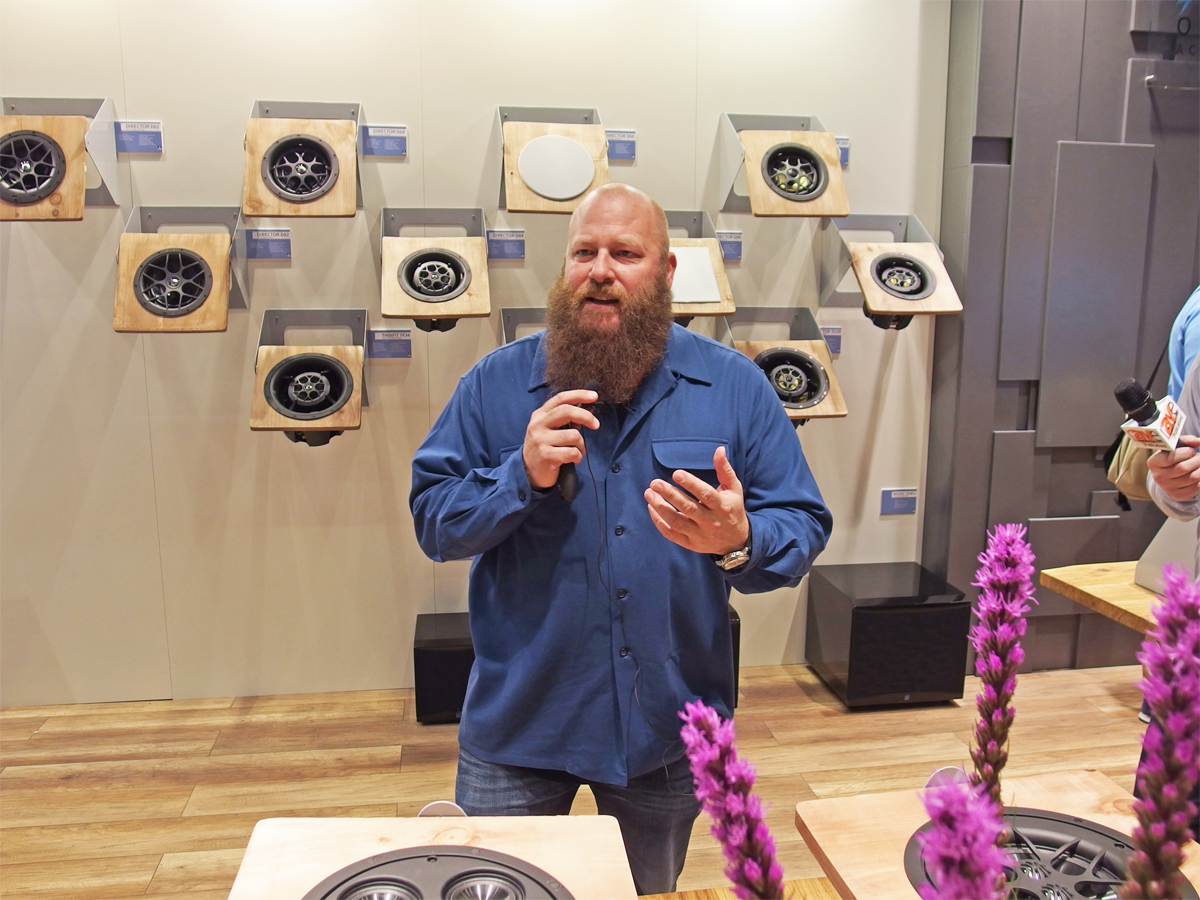 In clear upbeat mood, Jeremy Burkhardt, now CEO of Origin Acoustics, addressed the press at the second day of ISE 2015 and confirmed the brand’s official launch into the European Union repeats the success already achieved in North-America. Some of Europe’s best companies rushed to get on board and secure access to the new products. Important agreements with some of those companies to get permanent stock in Europe were also achieved.

Reinventing the In-ceiling Speaker
Origin Acoustics announced the introduction of the Director Collection to Europe as a key element of their worldwide launch. Designed from the ground up by famed speaker engineer and SpeakerCraft founder, Ken Humphreys, the Director Collection addresses the two greatest challenges inherent to an in-ceiling speaker. The first being limitations in bass response and the second being limited dispersion. 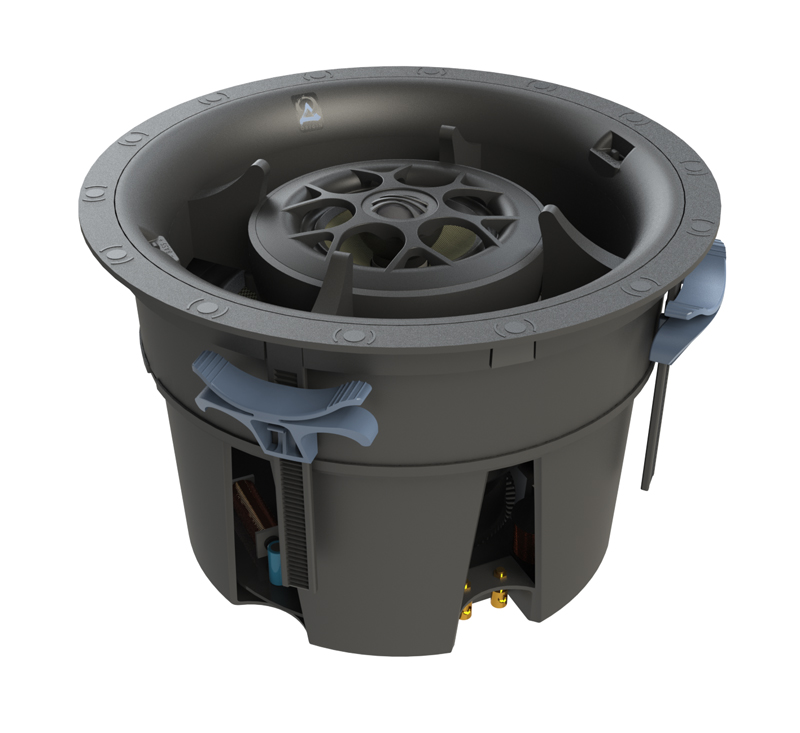 The dispersion issue was divided into two factors, the first being to widen it overall. This was accomplished through newly patented driver designs and driver location within the baffle. The second was to offer an ability to focus the sound at a particular point in the room. The FocalPoint mid/tweeter module pivots a full 36 degrees allowing for tremendous installation flexibility in this regard.

In addition to its superb sonic performance, the Director Collection also features Origin’s new ZipClip tool-less mounting system. Once the mounting hole is cut a mounting ring is inserted and clips that ride on a rail similar to a zip tie, are hand squeezed into place. The speaker assembly is then inserted into the mounting ring and locked into place with a simple clockwise twist. The system simplifies the mounting process and increases installation efficiency, which will help trim dealers’ labor costs.

Completing the system is an ultra-fine perforated grille with virtually no bezel that is magnetically attached to the baffle. The grille material dramatically reduces shadowing, an effect in typical grilles which often makes the grille more visible when installed regardless of whether the grille is painted to match the ceiling or not.

“We had two years of hardcore thinking to reinvent the in-ceiling category, from performance to installation ease, we accomplished a breakthrough. Origin products are disruptive and unique with smaller size footprints on the ceiling, high performance sound quality throughout the room and a better visual aesthetic. Our patents will cover most every aspect of these architectural loudspeakers and I hope to share these advancements with other companies to help lift the entire industry,” says, Origin CEO Jeremy Burkhardt.

Affordable and Thin
Other new products introduced at ISE 2015 include the Producer Collection of affordable in-ceiling loudspeakers and three models in the new ThinFit Collection, particularly important in Europe because of its limited depth requirements.

The Origin Producer Collection was designed for multi-room installations where system cost is very critical. Featuring polypropylene and injection molded graphite woofers coupled with either a silk or aluminum tweeter and crossed over through multi-component networks, these speakers don’t compromise performance even at the lower price level. Even the same magnetic grille with an ultra-thin bezel found on the speakers from the high-end Director Collection is part of the Producer package.

There are 5 models in the Composer Collection, three coaxial and two stereo models with dual voice coil woofers and dual tweeters. 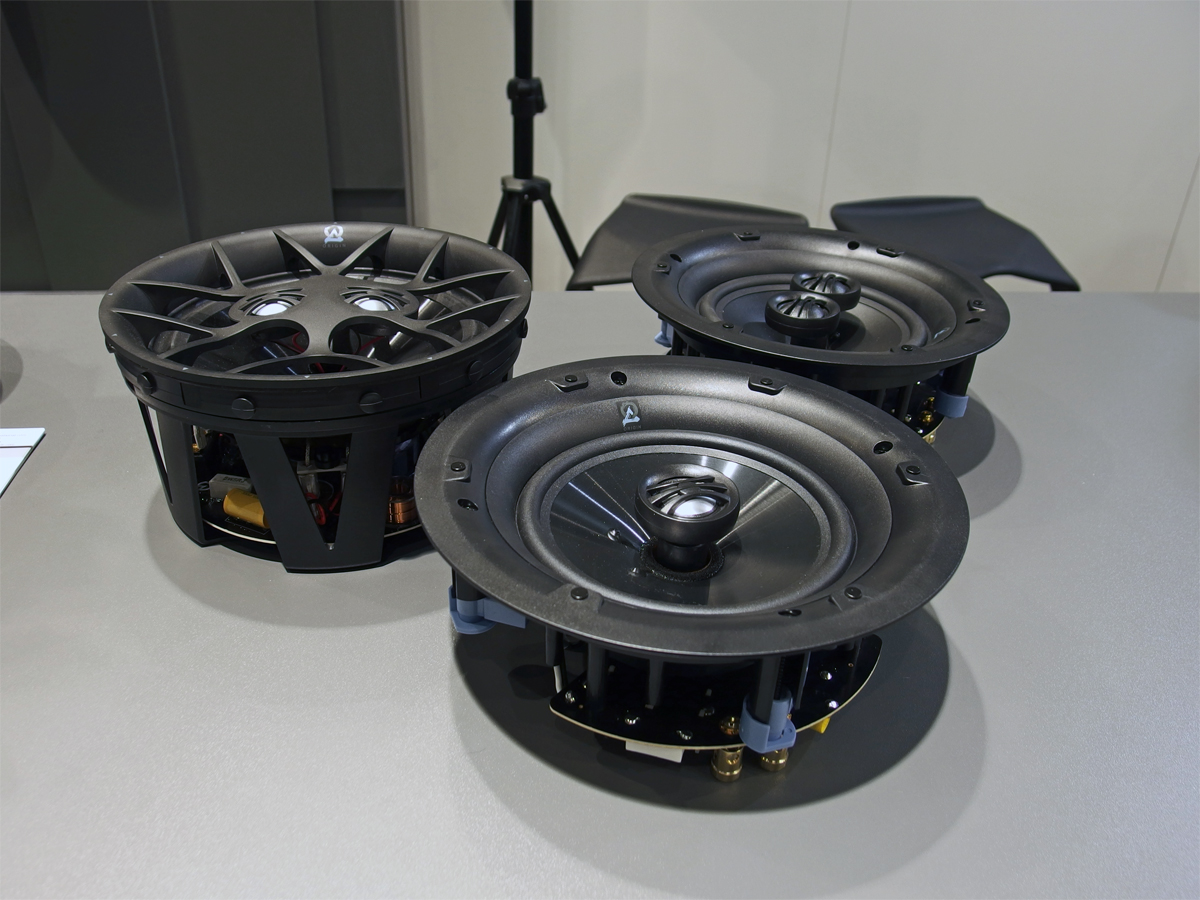 The new ThinFit Collection - with three models so far - was designed specifically for installations with limited depth requirements, featuring an integrated back-can with a mere 70mm depth. “We saw this as a necessity,” remarked Jeremy Burkhardt, Origin’s CEO. “The construction methods in MDU’s and some geographic areas demand a very thin profile. The idea was to limit depth without limiting performance. The ThinFit Collection delivers on both counts.”

The TF34 and TF 36 models share a similar driver configuration, with dual 88mm woofers and dual 88mm midwoofers surrounding a 20mm tweeter. The TF34 model features Injection Molded Graphite (IMG) woofers and midwoofers with an aluminum tweeter. The TF36 steps up to Glass Fiber woofers and a silk-dome tweeter. Both are mounted on an injection-molded baffle that integrates into the steel back-can creating a ported enclosure.

The TF64DT features a 17cm dual voice-coil, IMG woofer and two 20mm aluminum tweeters. These are also mounted on an injection-molded baffle, which attaches to a steel back-can creating a sealed enclosure. The dual-tweeter design allows both left and right channels to be produced from a single speaker. All three models use the same bezeless magnetic grille assembly found on the Director D80 series.

The acoustic dampening enclosures are fully integrated with the woofers to create a superior sonic result.  The enclosures also cut down on room-to-room sound transfer by up to 9dB.

A Fresh Look at the In-wall Speaker
Origin’s new Composer Collection of in-wall speakers features the new SpringLock mechanism, a new installation method that requires no tools, and also reivents the drivers and even the shape of the baffles. 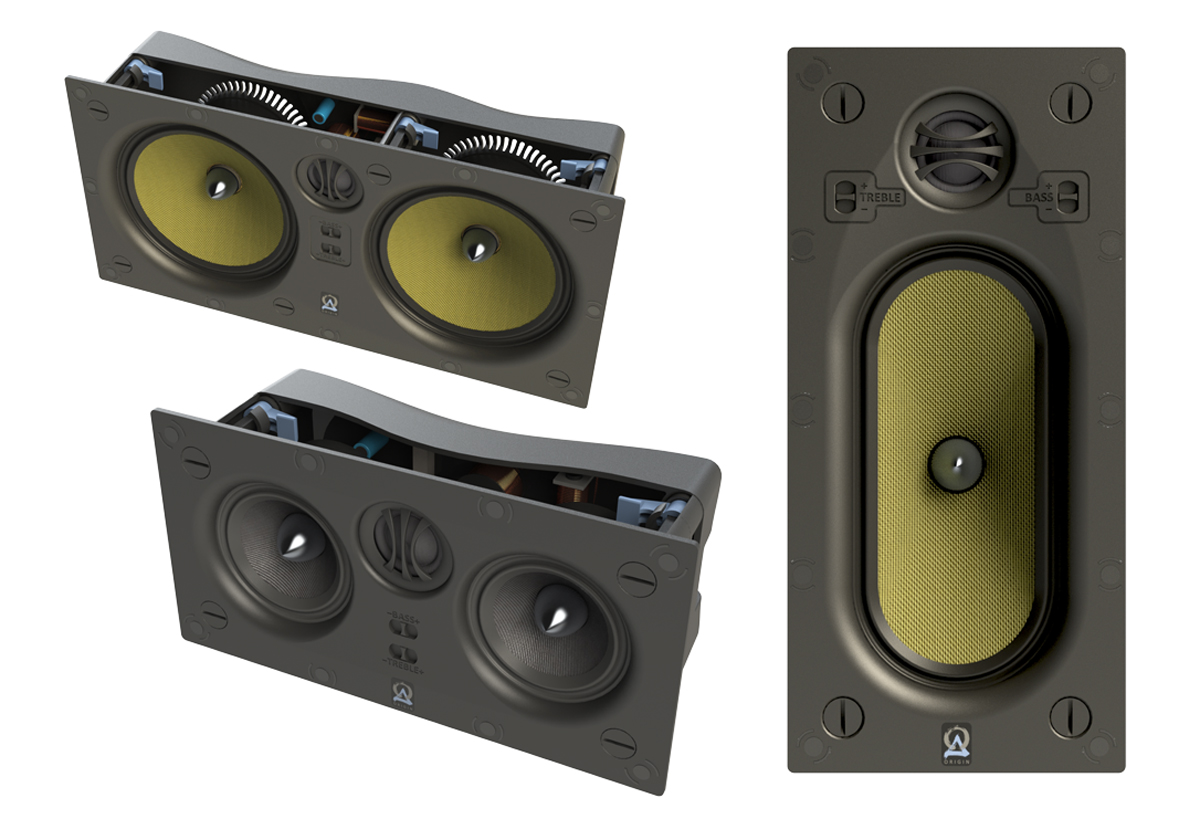 A new surround technology is employed on all the woofers in the collection. The X-Wave butyl rubber surround is actively involved in absorbing 700-1,400Hz resonances that run up and down the woofer cone causing unwanted distortion. The surround is also part of a progressive suspension system that becomes more rigid as the driver approaches its furthest excursion point. This results in greater control of the cone and less distortion at maximum volume levels.

The Dual Plane Stabilized Diaphragm or DPSD tweeter is suspended at both the outside edge as well as at the peak of the dome. This improves linearity and power handling along with lower frequency extension. This allows the tweeter to crossover much lower to the woofer section resulting in a major improvement in overall dispersion of the system.

Not satisfied with only improving the sound quality and ease of installation, the team also changed the aspect ratio of the baffle, with a longer and thinner profile, more aesthetically pleasing in the home. There are 10 models in the Composer Collection.
www.originacoustics.com
related items