At IBC 2014 in Amsterdam, HARMAN Professional showcased an impressive array of new products for broadcast applications in its Soundcraft and Studer routers, cores and digital consoles lines. Studer introduced no less than eight new products and updates for its line of digital audio consoles including the new Vista X digital console, new Infinity Core 200, version 5.2 software upgrades and AES67 interfacing via a D23m card.
IBC 2014 - Studer is adding to the already impressive power of its Vista X digital console with the Studer Vista V. The new 52-fader Vista V is based on the same Quad Star technology as its predecessor the Vista X launched earlier this year, but in a more compact footprint ideal for smaller studios, OB trucks and large live productions. 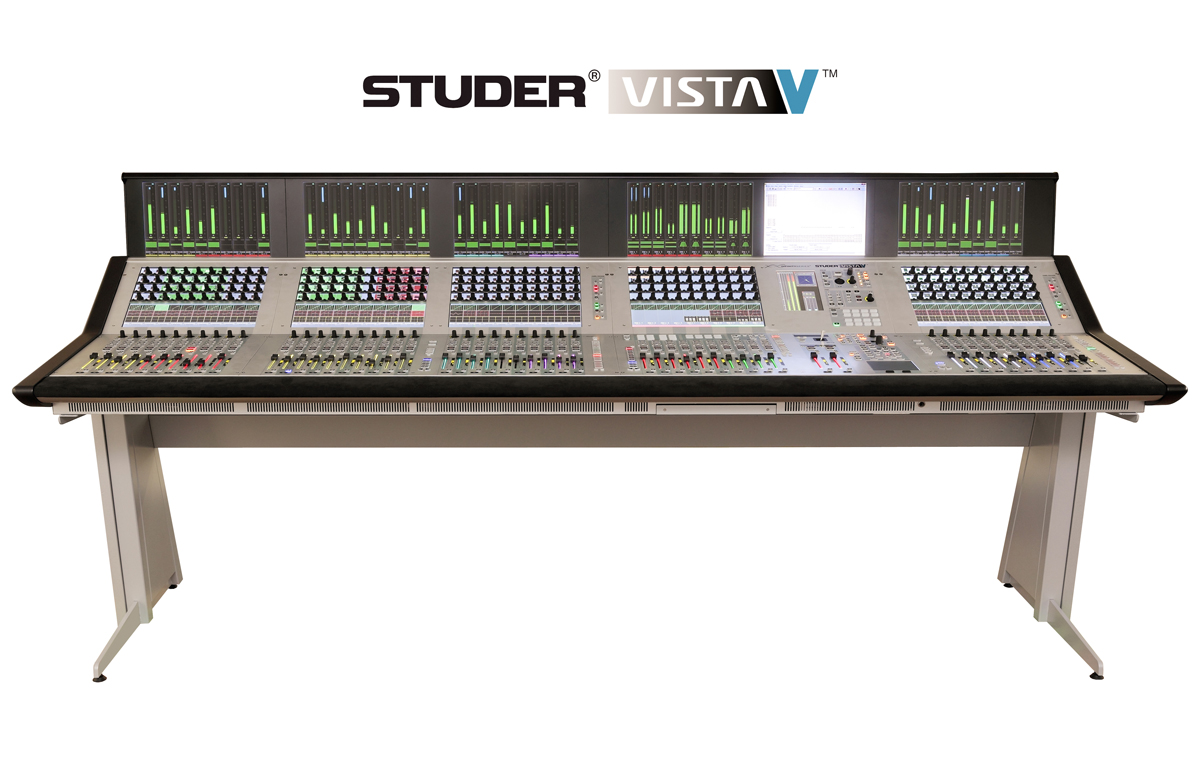 At the heart of the Vista V is the Infinity Core, which uses CPU-based processors to deliver an unprecedented 800+ audio channels with superior sonic quality, and more than 5,000 inputs and outputs. The use of CPU-based processors suggests exciting possibilities for scaling up to even larger channel counts, and for running third-party algorithms. Being able to program in high-level languages like C++ speeds up the time of implementing new features—never possible when using DSPs and FPGA processing technology. Infinity Core provides 12 high-capacity A-Link ports (1,536 channels per port) for D23m I/O integration or direct connection into routing systems from Artel, Evertz, Riedel and more. The Vista V also offers easy integration into most AoIP networks used in broadcast like Dante and Livewire, and AES67.

The Vista V with Quad Star technology uses four processors to achieve aviation-standard levels of redundancy in the control surface, while CPU-based DSP makes it viable to provide two completely independent DSP cores running in parallel with instant changeover, without a single sample of audio dropout.

The Vista V also comes replete with VistaMix, Studer’s proprietary automated microphone mixing algorithm, based on gain sharing ideal for simplifying the mixing task at multi-contributor events like game shows, debates etc. VistaMix removes the need for an operator to manually adjust all the faders all the time, leaving the microphones of talking participants open, while closing the microphones of silent participants in order to reduce spill and background noise. As VistaMix runs directly on the core, no external boxes are needed.

Like other consoles in the Vista range, the Vista V avoids complex mental mapping, thanks to Studer’s Vistonics interface, featuring rotary controls and buttons directly into the flat screen displays, providing visual feedback exactly where the operation is. Each audio function is always associated with the same colour, e.g. red for EQ and filters, green for dynamics, and so on. FaderGlow combines with assignable channel naming to further reduce stress by illuminating each fader in the colour relating to the relevant Vistonics function, creating an instant overview of console status. Studer’s new Spill Zone feature enables users to line up a group’s contributing channels with the press of just one button. FaderGlow then identifies their affiliation assigning the appropriate illumination.

The Vista V also features a built-in, high-class Loudness meter. The large-scale bargraph meter monitors every channel from mono to surround, plus a history display of up to the last 50 seconds of audio to capture any annoying clicks and overloads that are so hard to find in a multi-mic live show.

Built into the Vista V is the BSS DPR-901 Dynamic EQ Plug-In, assignable to any channel as desired and running directly on the Infinity Core. In addition, up to six Lexicon PCM96 Surround high-quality reverb processors can be connected with their parameters stored in the mixer’s snap shots and accessible directly from the Vistonics interface. The Vista V also allows users to connect up to four Soundcraft Realtime Racks, providing access to Universal Audio’s (UAD) huge Plug-In library assignable on up to 64 Insert-Channels where their parameters are stored and managed directly in the Mixer’s CUE-List automation.

Expanded possibilities
With the introduction of its Vista V digital console, Studer is also unveiling the new Infinity 200 processing engine that drives the console. The Infinity 200 is designed for smaller facilities that require lower channel counts and full system redundancy. 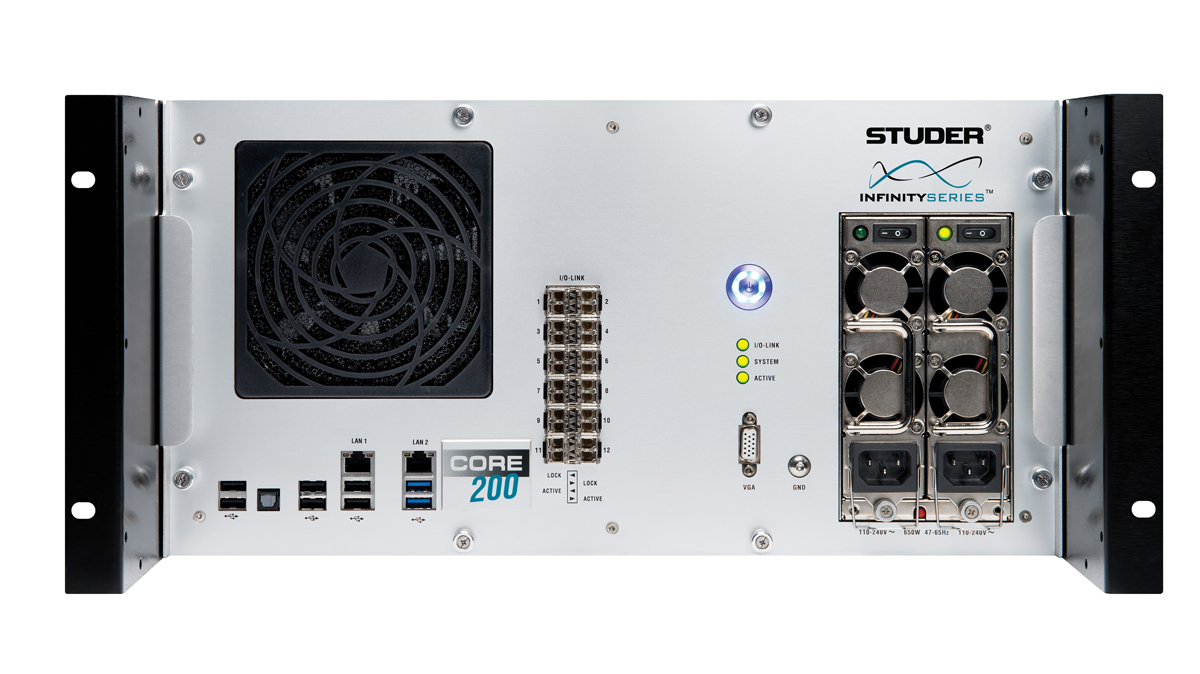 The Infinity 200 offers the same benefits of the original Infinity DSP Core, which is found in the Vista X console, introduced earlier this year. The Infinity 200 enables up to 200 audio channels to be processed in a single CPU-based board.

The Infinity 200 features Studer A-Link high-capacity fiber digital audio interfaces, and D23m I/O frames are used to break out these A-Link connections to standard analog, digital, Audio over IP (AoIP) and video interfaces. The A-Link interface also provides direct connection to the Riedel MediorNet distributed router, allowing many Infinity systems to be connected together with router capacities of 10,000 square or more.
In addition, Studer is introducing version 5.2 software upgrades to its Vista X, Vista V, Vista 1 and Vista 5 digital consoles and AES67 interfacing via a D23m card.

Addressing a specific need in the sports broadcast market, Studer unveiled a prototype unit - the Studer Ball Chaser. Designed for live sports coverage the solution allows audio broadcast engineers to use a joystick to open the shotgun microphone closest to the action on the playing area, while keeping the other microphones closed.
www.studer.ch
related items