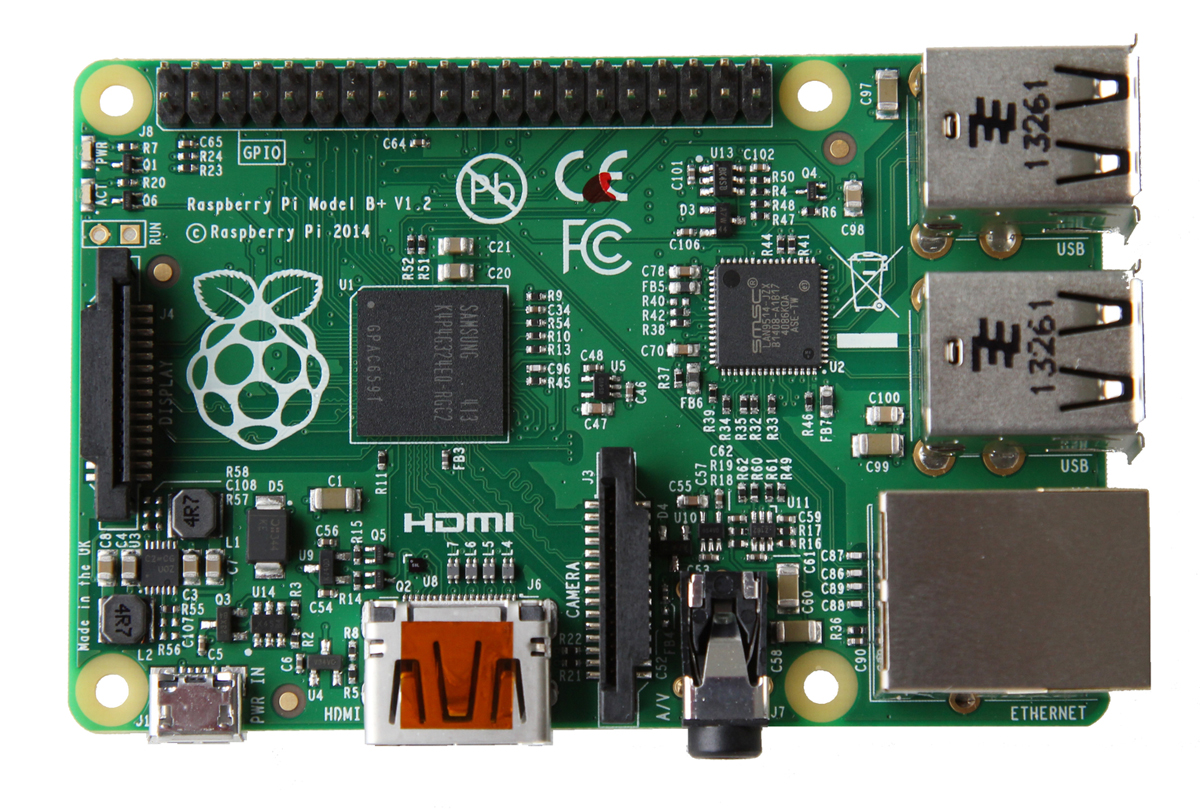 The GPIO header in this new Model B+ has grown to 40 pins, while retaining the same pinout for the first 26 pins as the Model B. Featuring a 40-pin extended GPIO, even more sensors, connectors and expansion boards can be added to the board, allowing users to increase the complexity of their Raspberry Pi projects.

The B+ also has 4 USB 2.0 ports, compared to 2 on the Model B, and better hotplug and overcurrent behaviour. Up to 1.2A can be delivered to the USB ports to connect power-hungry devices and accessories without needing mains power or an external USB hub. A great improvement—certainly towards reliability—was the replacement of the old friction-fit SD card socket with a much nicer push-push micro SD version.

In line with today’s electronic concepts, the new board also lowers power consumption - (600mA) when running, compared to 750mA in the Model B board. By replacing linear regulators with switching ones the power requirements are reduced by between 0.5 W and 1 W, while the audio circuit incorporates a dedicated low-noise power supply, enabling better audio applications, an area where other popular open hardware platforms have gained in popularity.

The new board is also much better organized, with the USB connectors now aligned with the board edge. It is powered by micro USB with AV connections through either HDMI or a new four-pole 3.5mm jack connector replacing the existing analogue audio and composite video ports. The corners are rounded with four squarely placed mounting holes.

In the two years since the Raspberry Pi foundation launched the current Raspberry Pi Model B, the development team often said they would bring one more hardware revision to incorporate the numerous small improvements people have requested. As they explain in their blog, “This isn’t a “Raspberry Pi 2”, but rather the final evolution of the original Raspberry Pi.”

The Raspberry Pi Model B+ uses the same BCM2835 application processor as the Model B. It runs the same software, and still has 512 MB RAM. Anyone interested in adapting their current projects to the new platform should check the new GPIO pins and mechanical specs. To ensure continuity of supply for industrial customers, the Model B will be kept in production for as long as there’s demand for it.

At $35, the new model B+ is the same price as the older model B and is already available from Farnell/element14/Newark here, and at RS/Allied Components here.
www.raspberrypi.org
related items