The Swiss audio specialist will be introducing a variety of new hardware and software at the IBC show in Amsterdam (September 12-16) further expanding the options for the Horus and Hapi modular audio interfaces with a new AD and DA combination board. Merging will also display new features and plug-ins for its new 64-bit versions of Pyramix, Ovation and VCube.
The successful launch of the latest in Merging’s Networked Audio range of interfaces has proven the products are what the market needed. Hapi has been shipping increasing numbers since it started shipping in June 2014 and reached 120 units sold in the first two months. Hapi uses the same AD8D/P and DA8/P option cards as Horus, in a compact 1u chassis with two card slots in contrast to the six with Horus. Now, in a step to significantly enhance the practicality of both Hapi and Horus, Merging is promising to show at the IBC Show in Amsterdam a new AD and DA combination board that will instantly double the quantity of analogue I/O available on the units. 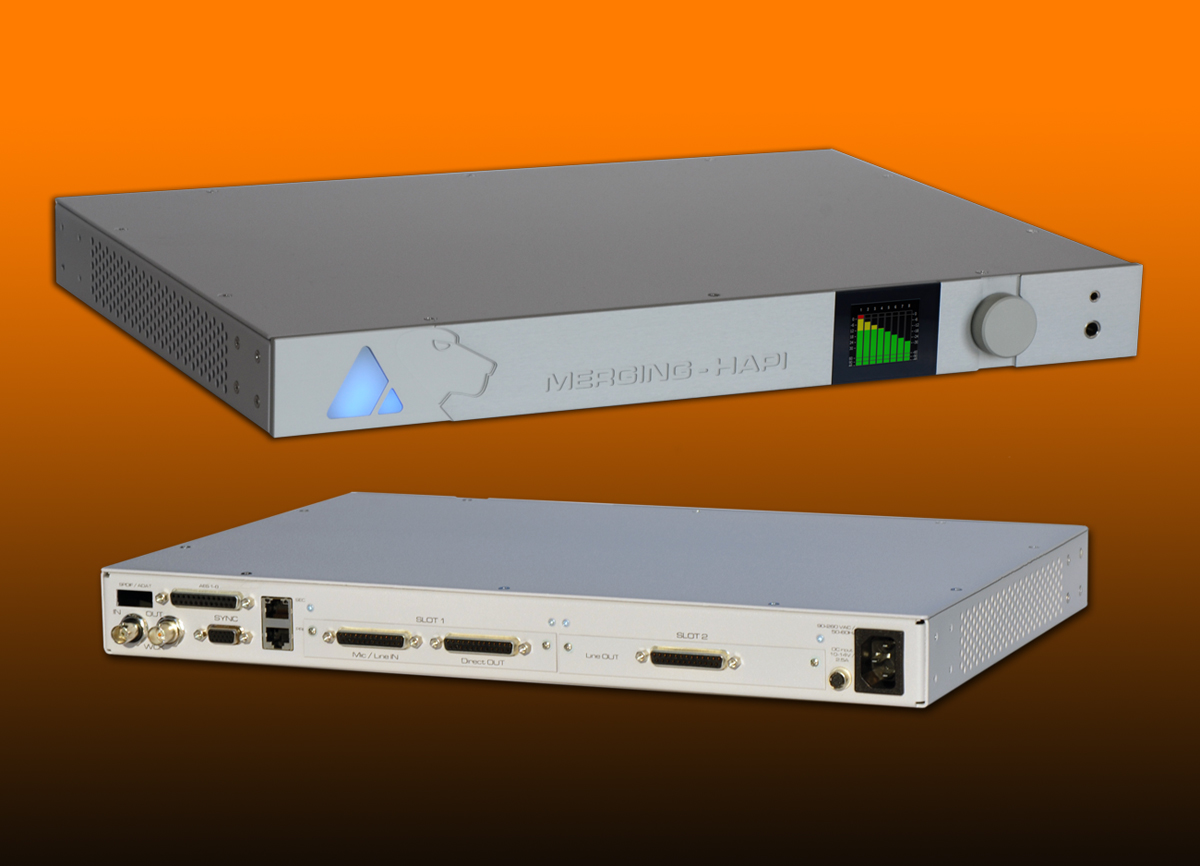 A staggering 48 in/48 out on the Horus interface makes it the ideal stagebox for many applications. For Hapi, this allows a number of exciting possibilities. 16 in/16 out or 8 in/8 out with MADI are likely to be big sellers. Despite the extra component density, the performance of the ADA8 AD and DA option card is virtually identical to the AD8 and DA8 components that are still in the range and can be “mix and matched” to form a huge range of I/O combinations.

Able to work up to 192 kHz with better than 120-dB dynamic range, these Swiss designed audio interfaces have the same exceptional transparency and headroom on the mic preamplifiers. There is no loss in functionality either. Each ADA8 board comes equipped on the input stage with Mic/Line input selection, Phantom power, LPF and phase invert. The output stage is also equipped as the DA8 card is, with a Dip switch controlled line up level up to 24 dBu and a digitally controlled output trim.

All parameters can be controlled from the front panel or remotely via the RAVENNA LAN connection, with the ability to control all of the Networked Audio range via a simple web browser and the units have CoreAudio and ASIO drivers to support any DAW.

At the Amsterdam show, the new 64-bit versions of Merging’s Pyramix, Ovation and VCube, will all have moved to *.1 versions. Major enhancements for Pyramix relate to Virtual Transport improvements, archiving metadata workflows and digital album publishing for DSD/DXD multi-channel releases. VCube gets a complete update on rendering options and now supports a range of video cards from Blackmagic Design for capture and playback. Merging will also highlight a recent option for Ovation, enabling or disabling the playback logging function, either manually or on a time cues. This ensures that no false logs are made during set-up or rehearsal but nothing gets missed as soon as the show goes live.

A powerful selection of VS3 and VST plug-ins from companies like Flux, Vincent Burel, Algorithmix and AudioEase are now available for Merging’s new 64-bit world and there will be a great offer running throughout IBC and beyond. The Vincent Burel offering of reverberation, a full set of dynamics processors, EQ and measurement tools plug-ins have acquired a multitude of fans worldwide and these will be available to new customers at a 50% reduction from September 1–October 31, 2014. There are also great upgrade deals for existing VB customers.