Merging+Anubis is a compact audio recording interface with all the high-end features and quality of Merging's products, while also being a versatile extension for Ravenna, AES67, and ST2110 audio networking systems in live productions, studio recording and broadcasting. The best part, it is a fully configurable solution which Merging promised to expand gradually with new software modules, targeting different practical uses.

As Merging Technologies confirms, this powerful and innovative interface was clearly more than just another AD/DA converter with industry-leading specifications. Sales in the first year reached a four figure total and the diversity of the customers exceeded expectations. The fact that Anubis was an extremely powerful Ravenna/AES67 hub was very quickly realized by major international broadcasters looking to move their operations to regional data centers linked by IP. Anubis was ST2110 compliant from day one, so that enabled the monitoring of large numbers of AES67 audio streams in a very compact and affordable package. The results, often in conjunction with the Merging+HAPI, were outstandingly successful but there was one request that followed. Was there a way to make Anubis ST2022-7 (the SMPTE redundancy standard for Seamless Protection Switching) compliant?

The original concept for Anubis was for a low-cost, extremely high-quality AoIP interface that would be at home in a studio, post-production suite, or similar environment where a redundant network topology would not be anticipated. Adapting Anubis to fulfill certain roles, now and in the future, was anticipated and would be tailored by software. The initial Monitor Mission software allowed for listening to the chosen sources on multiple speaker sets or headphones and this made it perfectly adaptable to monitoring incoming streams from remote locations. Providing SPS (Seamless Protection Switching) was a bigger challenge because this was a hardware issue. A second RJ45 connection on the rear panel was needed.

The response from the Merging engineering team was immediate and development started on a new product that was made available in months despite the additional challenge of sourcing components and dealing with global lockdowns in the midst of the COVID-19 pandemic.
The Merging+Anubis SPS is now shipping with full ST2022-7 compliance. Perhaps not surprisingly, the initial deliveries have been made for multiple broadcast installations and production companies working with remote facilities.

Discussions with key broadcasters also revealed that discovery and control of IP sources is a major challenge and although Anubis, when controlled via the existing ANEMAN configuration and supervision software is capable of handling large numbers of Ravenna/AES67 audio streams, the overall network management compliance needed to be addressed.

In result of those discussions, Anubis SPS also adds NMOS IS-04 (Discovery & Registration) and IS-05 (Device Connection Management) to its list of features which is a major step forward in the easier integration into a complete IP infrastructure. With the cancellation of the last JTNM testing event in Houston, Anubis SPS does carry the JTNM Self-Tested badge for now, although the original Anubis has been physically tested.

More Anubis Updates
In addition, Merging is simultaneously launching its Merging Audio Device (MAD), which coupled with Anubis SPS, opens remarkable possibilities. MAD is a multi-ASIO driver (also with WDM support) that has an infrastructure option that supports ST2022-7, ST2110, NMOS and Virtual Machine control. This latter feature specifically recognizes that centralized data centers and server-based installations are now the new normal way to manage the global nature of the broadcast industry in the most efficient way.

Merging is now offering a compact desktop controller/monitor software with a host of other features that can interface with other NMOS compliant equipment and capable of monitoring Virtual Machines, all with full redundancy. This provides a scenario where local production satellites can use Anubis SPS in their workflow and feed ST2022-7 back to the central resource, which is similarly equipped to receive the streams on the same equipment which is fully integrated into the VM environment. And  Anubis was already fully capable of monitoring all the immersive audio standards that are increasingly being incorporated into the broadcast workflow.

Merging’s recording users can also benefit from the second RJ45 connection. The convenience of using Ravenna networks for recording has been well proven for many years and the amount of equipment needed for remote sessions has been drastically reduced. However, there has been the need to include a managed network switch even when there was only one stagebox. With Anubis SPS, users can just use a laptop and a Horus or Hapi interface and leave the switch at home. The second port is connected to the stagebox instead of being a redundant path. 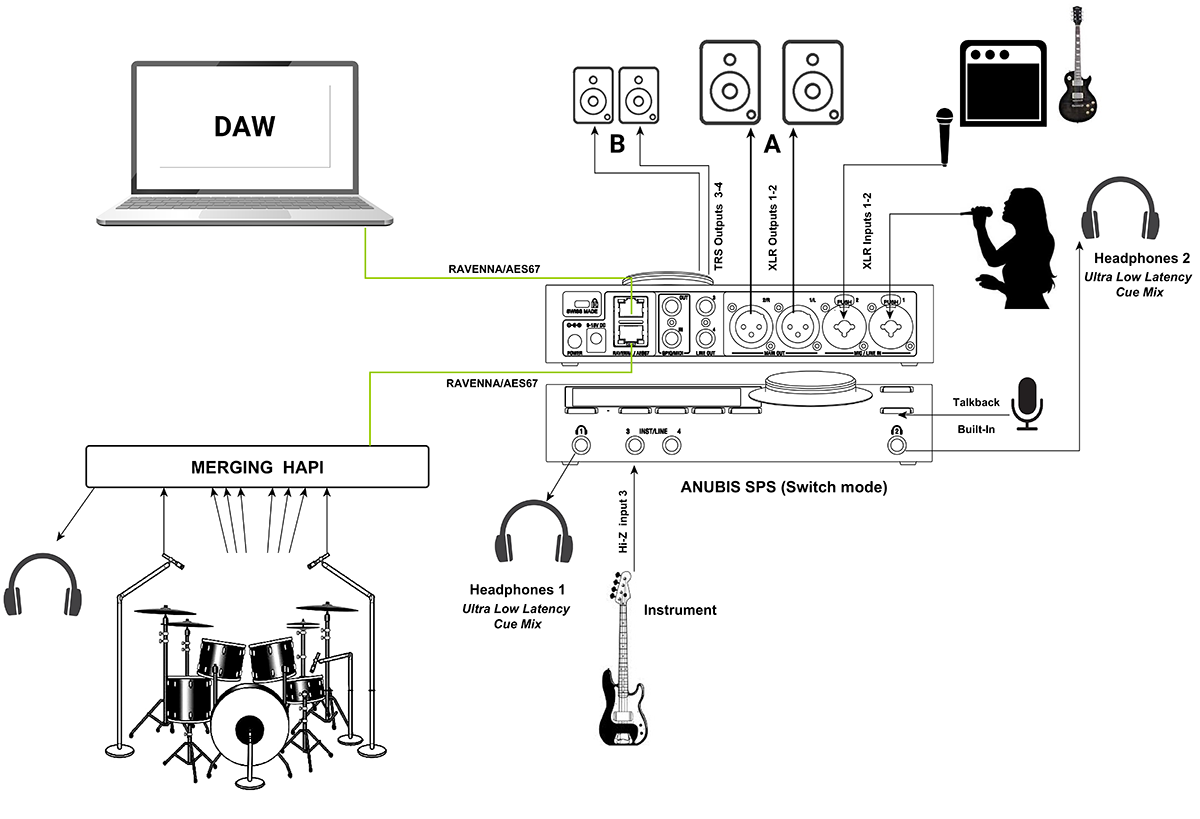 As Merging highlights, the Anubis SPS and the MAD Infrastructure option cost just over $2,000 which is remarkably reasonable for such a feature-rich combination. And Merging users recording in high-resolution audio formats will be thrilled to hear that Anubis SPS is also available in a Premium version, as is the regular Anubis product, which continues to be available.

A valuable addition to all Anubis products is the introduction of a comprehensive parametric EQ with extensive filtering on all outputs. This is another popular request and significantly enhances its role as the primary monitoring device on desktops everywhere. And more Anubis features are planned for all versions over the coming months. 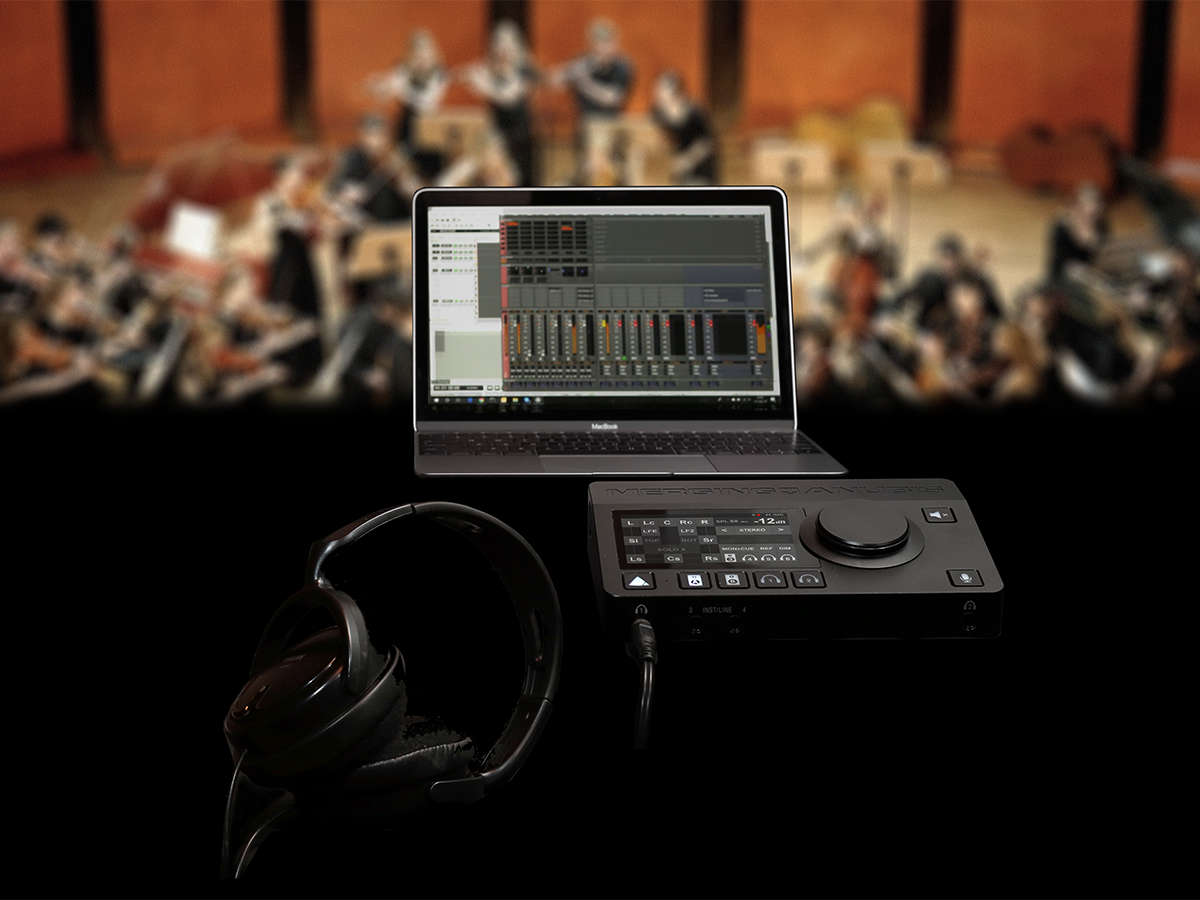 Merging Technologies is a Swiss manufacturer with 30 years of experience in developing groundbreaking products, with a dedicated user base in the elite end of the music, film, television, mastering and performances industries. The Ravenna solution for real-time distribution of audio and other media content in IP-based network environments uses standardized network protocols and technologies, and is fully AES67 and ST2110 compatible. With a capacity of nearly 8 x MADI streams over a single Gigabit Ethernet link, it is also the first and only Layer-3 based IP audio protocol with full support for high-channel count DXD and DSD signals. While primarily targeting the professional broadcast market, Ravenna is also suitable for deployment in other market segments like live sound, install market and recording.
ravenna.alcnetworx.com
www.merging.com
related items