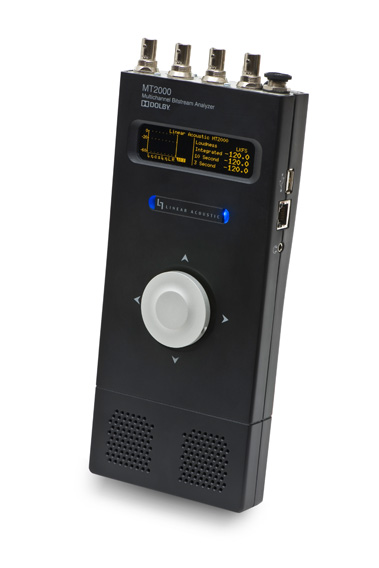 “The Linear Acoustic MT2000 Multichannel Bitstream Analyzer is the next-generation in PCM and Dolby- encoded audio analysis and generation,” says Tim Carroll, CTO, Telos Alliance. “It is an efficient tool for end-to-end system testing and is ideal as a replacement for the original Dolby DM100.”

This portable diagnostic tool provides stream composition and input envelope information, identification of the input video format and frame rate, and audio stream analysis, as well as error detection at the AES3 layer. Users can employ it for both two-channel and multichannel PCM and Dolby Digital, Dolby Digital Plus, and Dolby E monitoring and analysis. The MT2000 can also analyze SMPTE 337 formatting, measure Dolby E guard band and line position, and display all the metadata contained in a Dolby formatted bitstream. In support of ATSC A/85 (CALM) and EBU R128 recommendations, it also includes a comprehensive ITU-R BS.1770-1/2/3 loudness measurement capabilities with user selectable Dolby Dialog Intelligence.

A bright OLED display on the MT2000 provides a status update at a glance, while a combination jog wheel and navigation joystick provides complete control. In addition to viewing the characteristics of a signal from the analyzer’s display, engineers can utilize the unit’s built-in speaker or headphone output to listen to the audio on the spot. This way, the user can ensure sound quality and use of the proper signal.

The MT2000 is able to output test signals in both PCM- and Dolby-coded formats, and can output test signals simultaneously on all outputs, even while receiving and decoding an input signal. When generating two-channel PCM tone signals, it allows independently adjustable frequency and level on each channel. It also offers an extensive set of Dolby Digital, Dolby Digital Plus and Dolby E test bitstreams, which are stored internally. In addition, the unit allows the generation of video and A/V-sync test streams, and the performance of audio latency tests.

Signal I/O includes HD/SD-SDI, AES, MADI, and Toslink. Additional options include DVB-ASI and HDMI inputs. Power is supplied by an internal NiMH battery or an included external DC power supply. The MT2000 is designed and built in the United States, and is backed with a five-year warranty.
www.telosalliance.com/Linear/MT2000
related items