Recognized as a pioneer in digital wireless solutions working in the 2.4GHz ISM band, Line 6 introduced the new Relay G70 and G75 systems with support for multiple simultaneous transmitters reaching the same receiver, with support for different level instruments, with active, passive and acoustic pickups, for instance. The new designs are also more battery efficient and robust.
Line 6 was one of the first companies to design wireless solutions based on the 2.4GHz ISM license-free band for worldwide use, following the acquisition, in 2008, of X2 Digital Wireless Systems, one of the leading manufacturers of digital wireless systems for musical applications. Several generations of those solutions later and with Line 6 already a part of Yamaha (Line 6 was acquired by Yamaha in 2013), the company introduced a new generation of its Relay G70 and G75 systems for guitarists and performing musicians.

As if designing robust wireless multichannel audio solutions for operation in the crowded 2.4GHz band was not enough of a challenge, Line 6 was able to design multiple 24-bit solutions for voice transmission as well as instruments - which are much more demanding in terms of signal fidelity and tone when directly replacing guitar cables. Line 6’s range of Relay digital wireless instrument systems don’t compress the signals and have to transmit the full frequency response and wide dynamic range of an electric guitar or bass, going as low as 10Hz. Line 6 also combined its wireless transmission technology – able to reach an impressive 300 feet from the receiver – with Cable Tone, an emulation of the unique character of a standard guitar cable, and handle a wide range of levels from active to passive instruments.

Each receiver supports multiple transmitters, and features locking inputs that allow guitarists to plug right in, no special cables required. Preset scenes enable performers to control signal routing, levels and more, with the single press of a footswitch. For example, guitarists can set different levels for instruments with active, passive and acoustic pickups. Singer-songwriters and worship leaders can route an electric guitar to an amp, and an acoustic to the PA system, while giving both access to the built-in tuner. Multi-instrumentalists can set up unique signal chains to optimize the tone of violins, mandolins and more.

In addition to its renowned audio quality and rugged metal construction, Relay G70 and G75 support multiple instruments and are designed to be the control center of musicians’ live performance rigs. “Line 6 digital wireless is used by more guitarists than any other system,” says Marcus Ryle, Chief Strategy Officer, Line 6. “Now Relay G70 and G75 take the Relay legacy even further. In addition to pristine sound quality and road-ready build, Relay G70 and G75 take the hassle out of switching between instruments in the middle of a set – enabling guitarists to focus on giving a great performance.”

Apart from offering industry-leading audio specs for digital wireless solutions, the new Relay G70 and G75 systems also provide a low latency under 1.5ms, which is critical for musical instrument applications. A custom-designed radio with four calibrated internal antennas delivers a lossless 24-bit digital signal and a wide dynamic range of up to 120dB (A-weighted).

Guitarists will also enjoy 8+ hours of battery life, with up to 70 hours of standby time thanks to an intelligent sleep mode. The Relay G70 system features a rugged stompbox form factor designed for pedalboard use, while Relay G75 comes in an amp-top form that supports an optional footswitch, sold separately. The Relay G70 ($699.99 MSRP), Relay G75 ($699.99 MSRP) and Relay G70 Transmitter ($279.99 MSRP) will be available in March 2015. 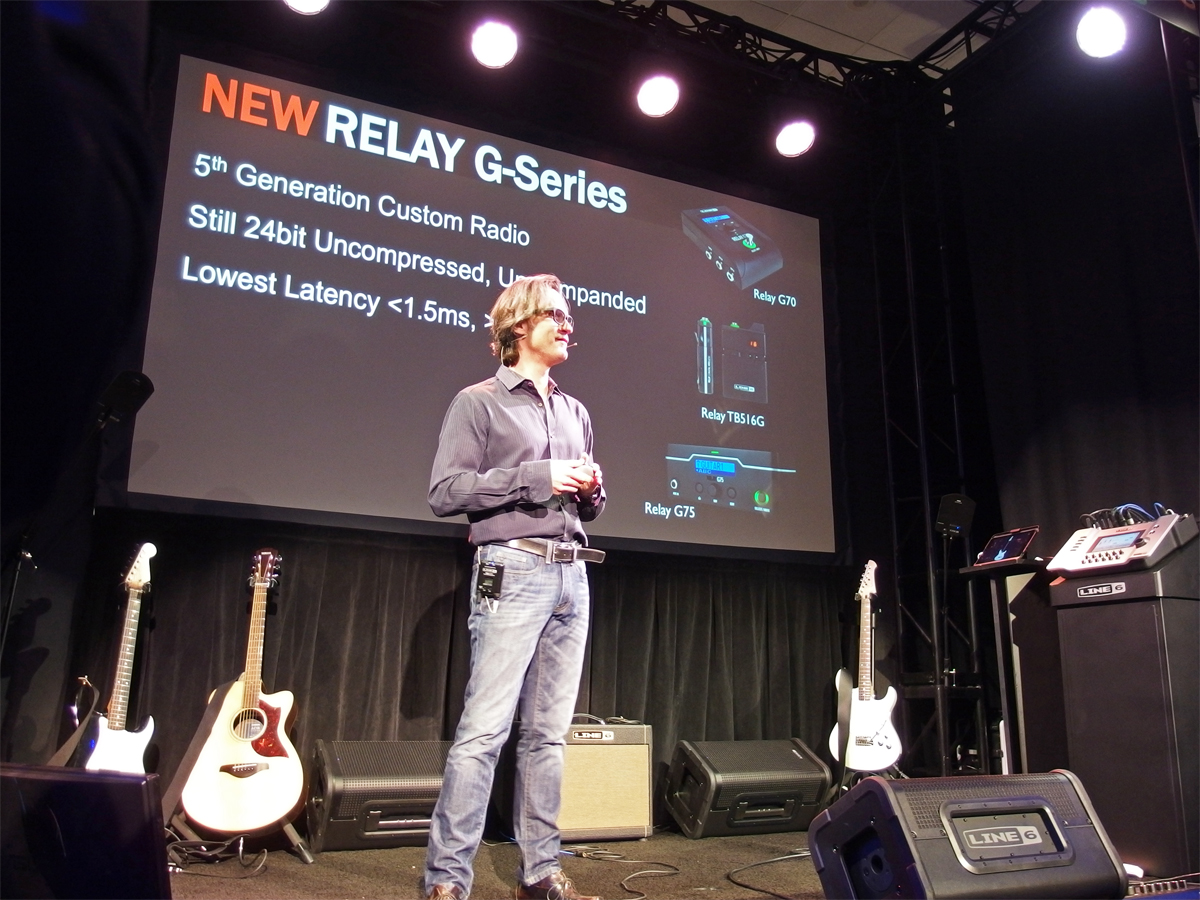 As Paul Foeckler, current Line 6 president and CEO, highlighted during the company’s press conference at the NAMM Show, the new Relay solutions are already products of collaboration with Yamaha R&D departments, in an integrated effort, which will become increasingly visible in forthcoming months.
http://line6.com/relay-g70-g75/
related items