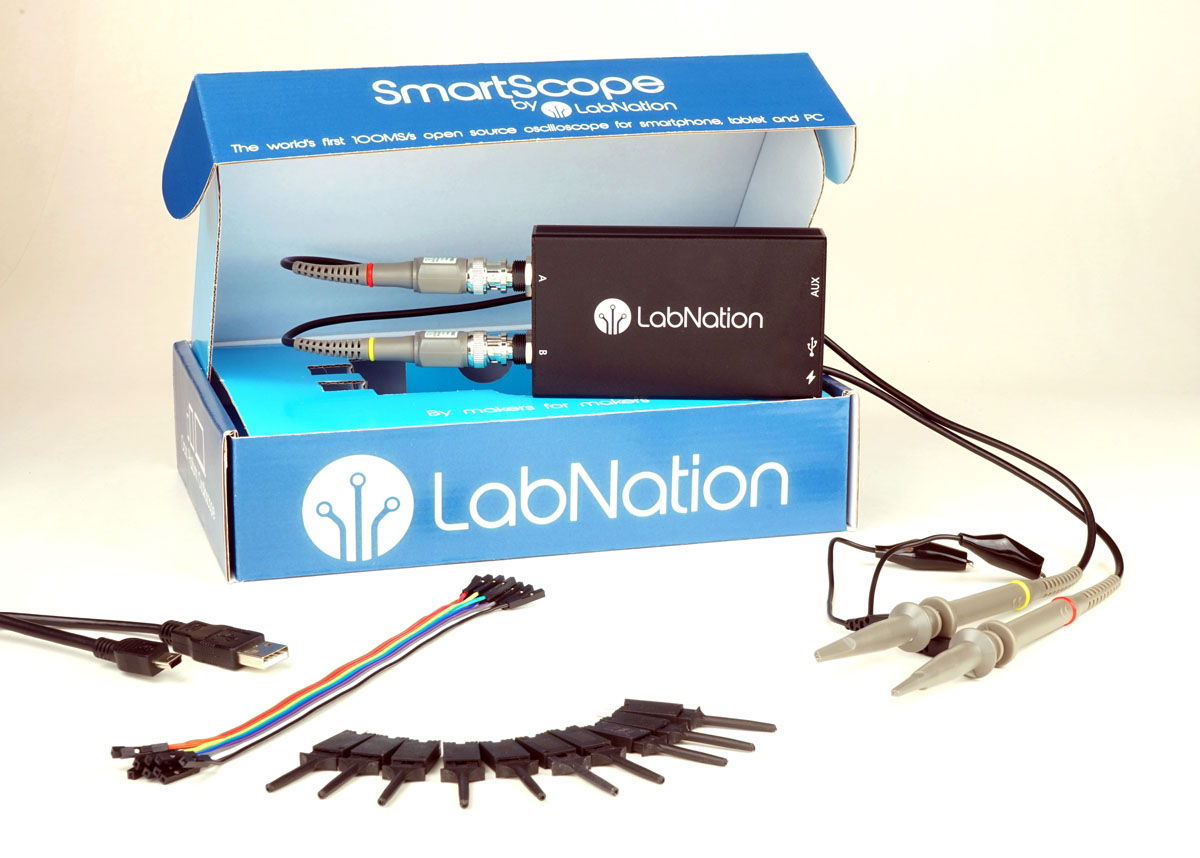 LabNation’s SmartScope is believed to be the world’s first test equipment designed to run on multiple operating systems and platforms such as smartphones, tablets and PCs. The result of an extremely successful Kickstarter campaign commenced in 2014, the project raised 645% of the funding goal within 30 days.

The SmartScope combines the multiple functions of an oscilloscope, logic analyzer and a waveform generator in an aluminium case measuring just 110.0 x 64.0 x 24.2 mm weighing only 158 grams. The software provides the user interface and functionality, and can be downloaded from the SmartScope web site. It is available for Android (Google Play Store or LabNation website), Apple Mac OS X, Apple iOS (jailbroken), Microsoft Windows 7, 8 and 10, and Ubuntu and Debian Linux distributions.

The oscilloscope provides two analogue channels with a sample rate up to 100 MS/s that provides a -3dB bandwidth of 30 MHz. Input signal range is ±35 V with a 1 MΩ / 1pF impedance and has an 8 bit precision and a maximal resolution of 2,5mV. The SmartScope oscilloscope software provides a comprehensive set of on-screen functions, either by touch, mouse or keyboard controls, for voltage scaling, timebase scaling, panning, input coupling, triggering and simple voltage measurements.

The logic analyzer offers 8 input channel with a user selectable logic level of 3.3 or 5 VDC. The SmartScope application includes a number of standard protocol decoders such as for I2C and SPI in addition to allowing custom decoders to be created. The single channel waveform generator can create arbitrary waveforms with a data rate up to 50 MS/s and an output level from 0 to 3.3 V. A digital output generator provides 4 channels, up to a rate of 100 MS/s at either 3.3 or 5 V.

The SmartScope is ideal for the growing numbers of makers using small board computers such as Raspberry Pi and Arduino so they can diagnose faults and learn more about how basic electronics and how their design is functioning. This light compact unit suits a broad variety of electronics engineering, field service, education and hobbyist applications.