SmartScope: Get your own open-source oscilloscope!

Following a very successful crowdsourcing campaign on KickStarter, LabNation started a new oscilloscope revolution with the introduction of the SmartScope, an open-source measurement device at an affordable price. The device works with OS X, Linux, Windows, Android and iOS (jailbroken).
Do you still have an old iPad which has been rendered totally useless since it no longer accepts iOS upgrades and there hardly any apps for it? Did you get one of those totally useless $90 Chinese Android tablets for your birthday which is now taking space in the drawer? Good news, you can now turn those into a very decent oscilloscope, thanks to LabNation. 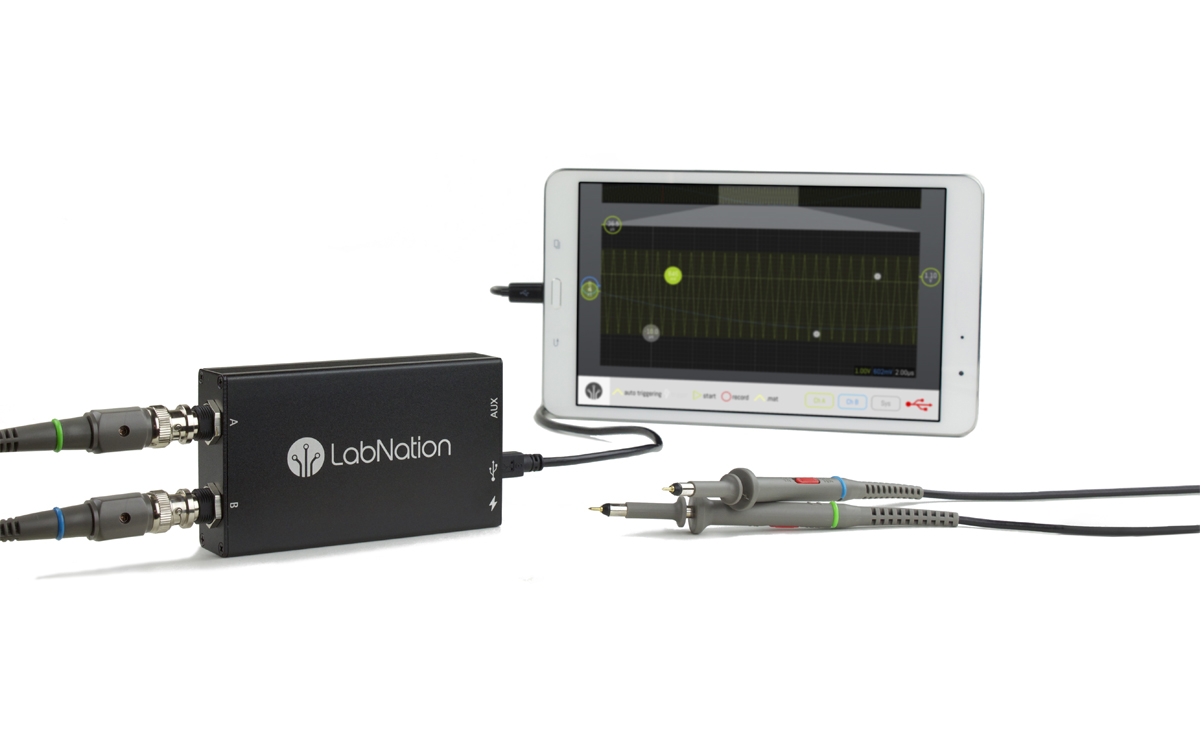 LabNation made the headlines in 2014 when it launched a crowdsourcing campaign on Kickstarter for the SmartScope open source project. LabNation completed the campaign successfully and managed to ship the first 1500 SmartScope devices at the end of 2014. Now, it is available in multiple websites and it means that, for around 240$ we can take our own measuring device anywhere. 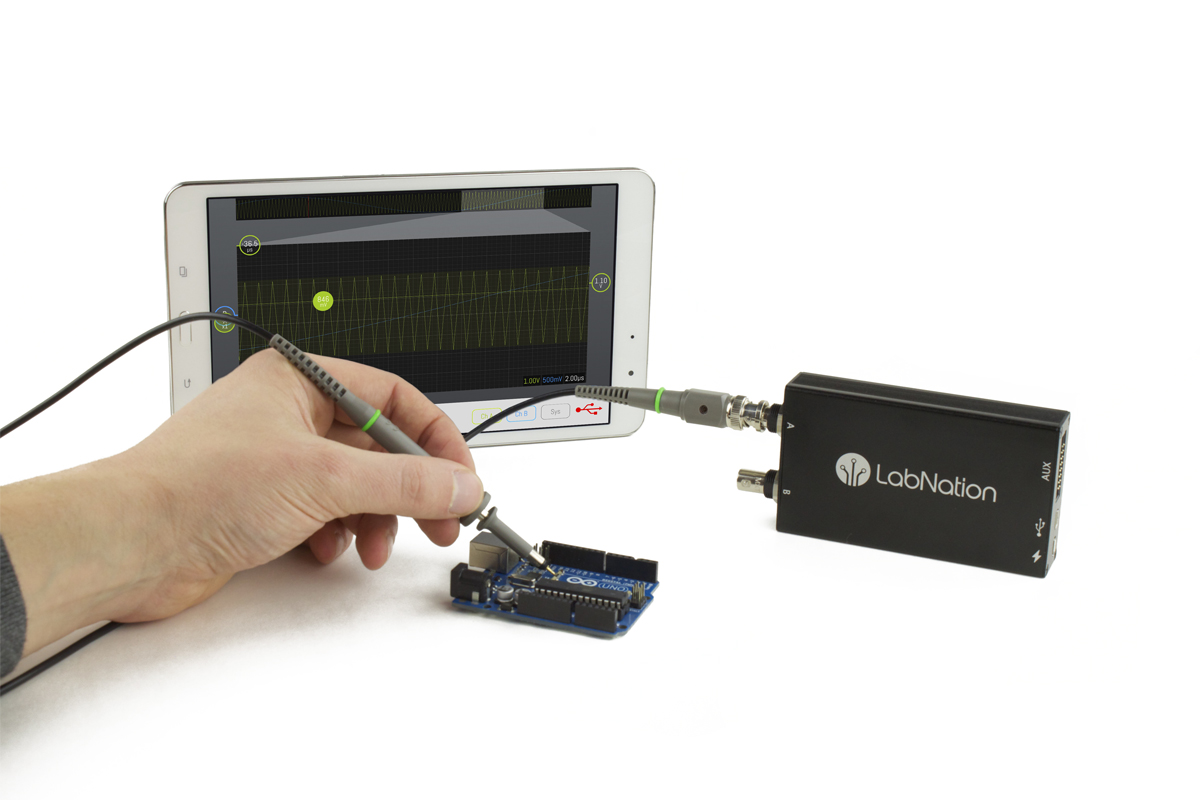 And one of the best features of SmartScope is the intuitive interface when connected to OS X, Linux, Windows, Android and iOS (jailbroken - hence fit for obsolete devices…), allowing to simply point, pinch and swipe to get results. The thing works fine with Windows PCs and Macs, but it clearly works better with tactile interfaces in Android (v4.0+ and USB host support) or iOS devices. The software can be downloaded free from LabNation’s website. And, being an open platform,  SmartScope allows developing our own digital interfaces using the 100MS/s logic analyzer. We can also design any signal we need using Excel, then upload it to the built-in Arbitrary Waveform Generator (AWG). 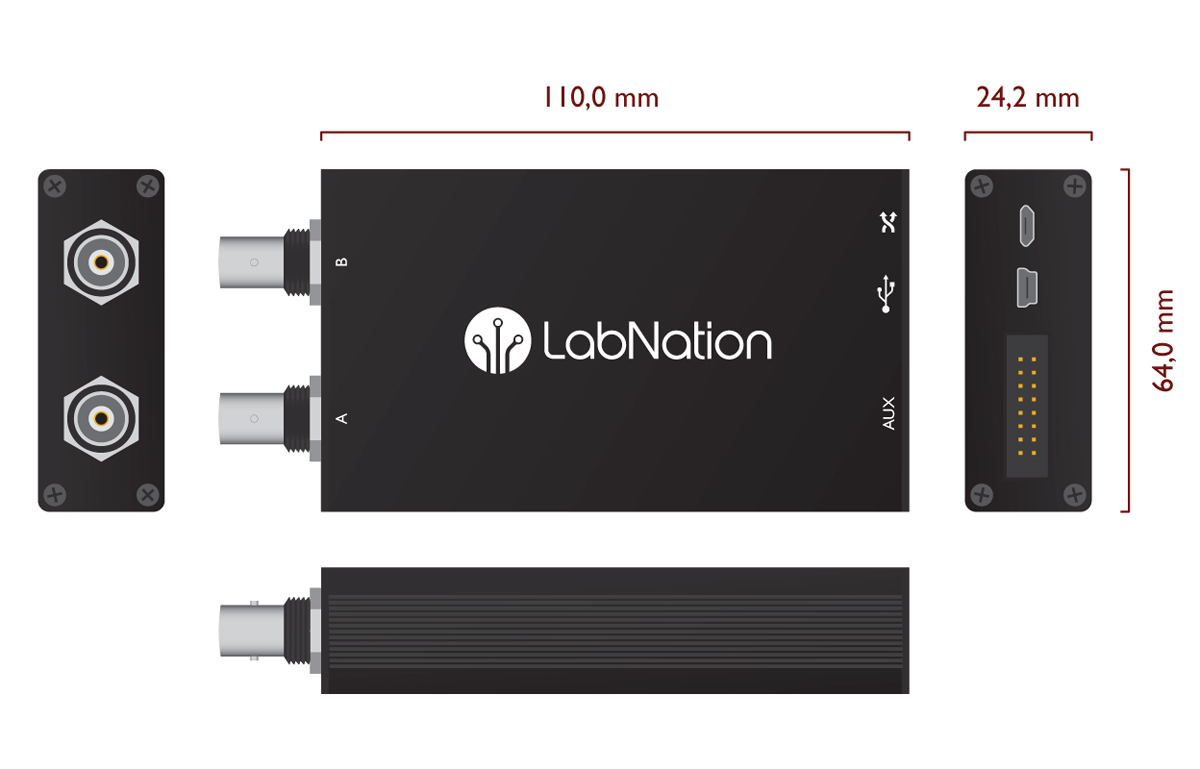 The SmartScope hardware is a simple metal enclosure with a pair of BNC connectors on the front for the analog inputs, and a 16-pin header at the back, for the 8 digital inputs of the logic analyzer, 4 digital outputs, and the output of the built-in arbitrary waveform generator (AWG). Also on the back are a mini and a micro USB connector to connect a tablet, smartphone or computer and an external power supply.

Inside the metal box, we can find one single board based on a Xilinx Spartan 6 FPGA, an A/D converter, a RAM chip and a PIC controller for the communications with the computer via de USB connection. There are several relays and opamps at the inputs for the range and AC/DC selections.

If you want to know more (and want to order one), there’s an excellent free review from Elektor magazine available here,
related items