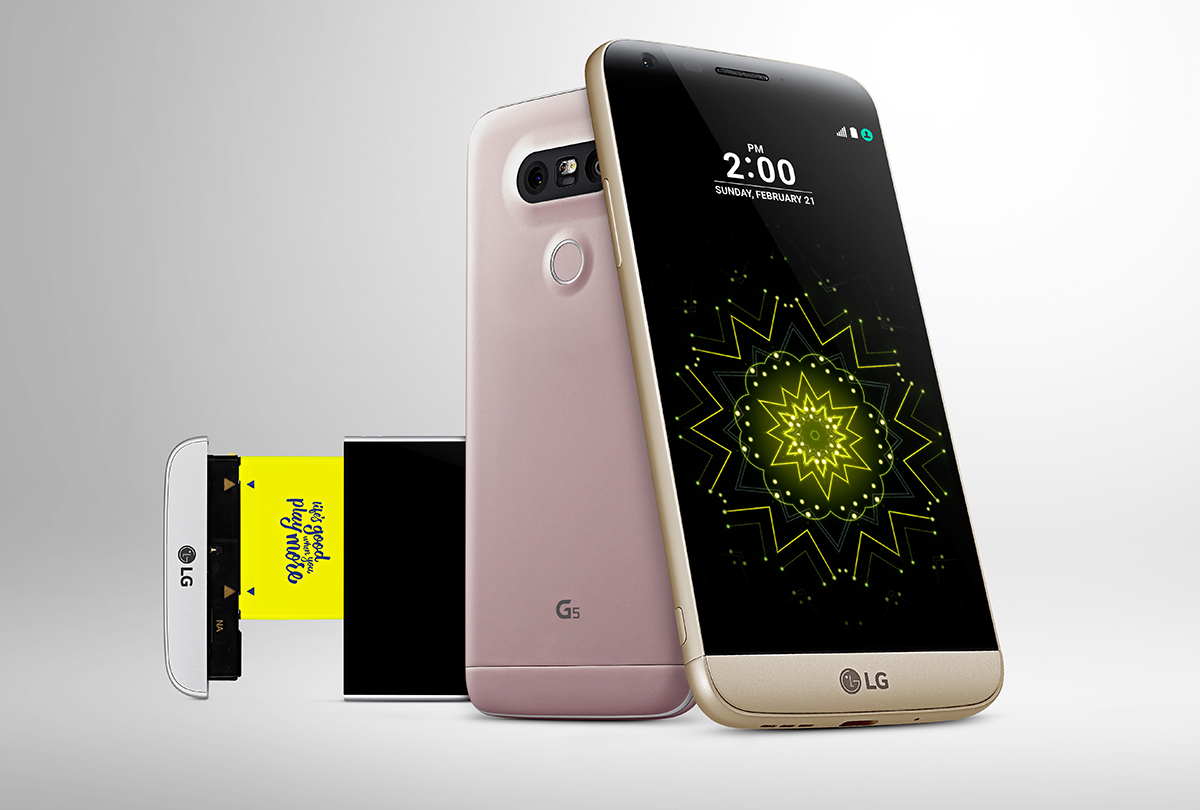 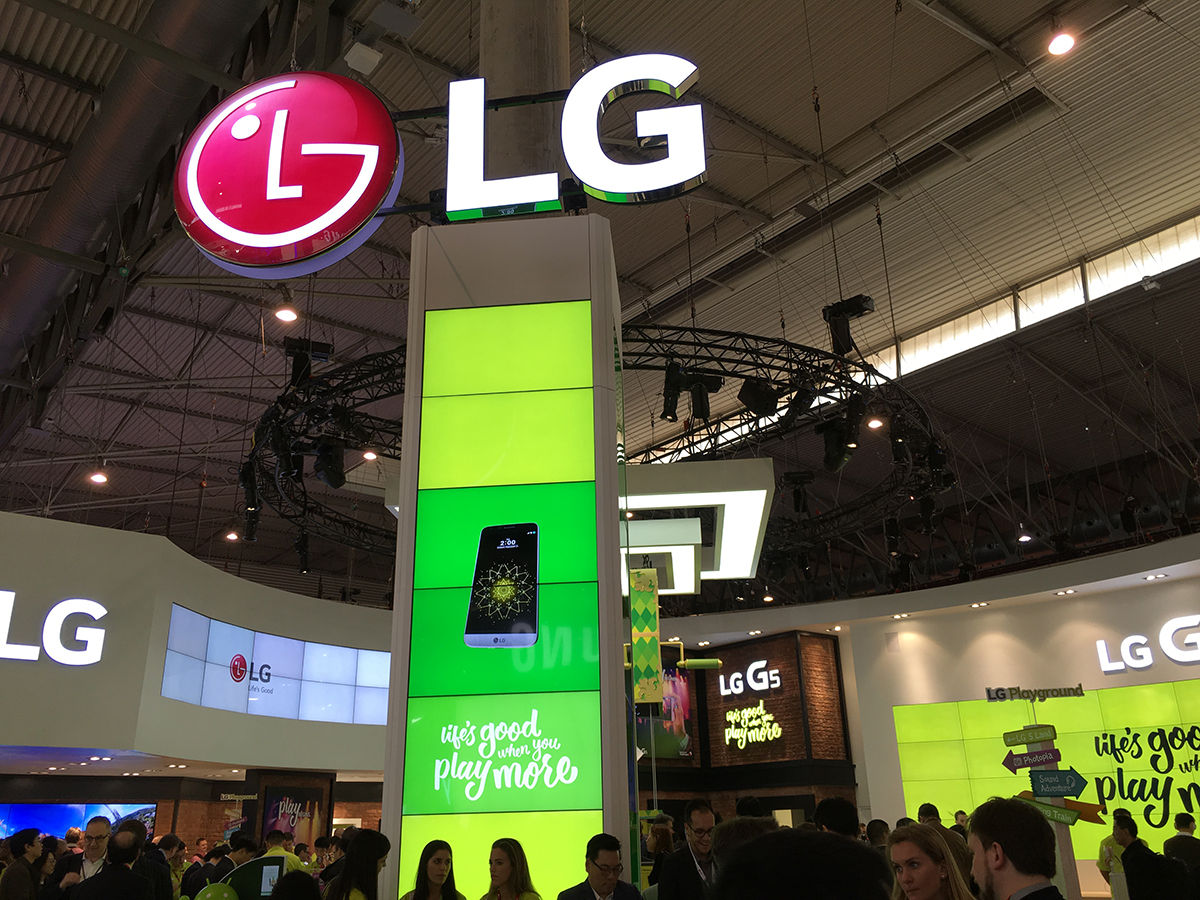 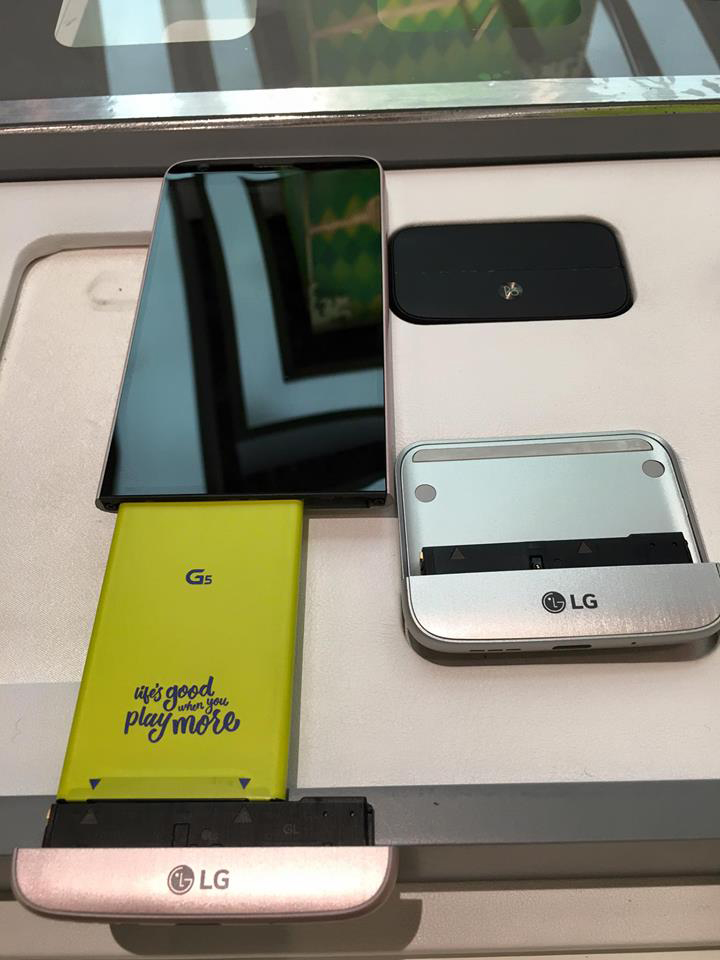 LG Electronics (LG) is not only leading the industry in displays, it wants to lead in the smartphone and mobile devices space. At the Mobile World Congress event in Barcelona it clearly knocked a strong punch against rival Samsung by announcing technology innovations in all fronts.

LG unveiled its LG G5 smartphone, a brand new design with not only a sleek, metal uni-body featuring a slide-out battery and a modular design, but also complemented by a full range of what the company calls “LG Friends” - a collection of companion devices to transform the G5 into a digital camera, Hi-Fi player and more.

Encased in the sleek metal aluminum body and Slide-out Battery to easily swap out a depleted battery for a fully charged one in seconds, the LG G5 also features a 135-degree wide angle lens that lets the user choose between standard or wide angle lens to get more in the shot. Second, the The 5.3-inch Quad HD IPS Quantum always-on display makes notifications just a glance away with the time, date and more available anytime without waking the G5.

Third, the 3D Arc Glass featured in the smartphone’s 5.3-inch display creates a gentle curve and a smooth colorful metal surface through an advanced microdizing process which takes anodized aluminum to a whole new level. 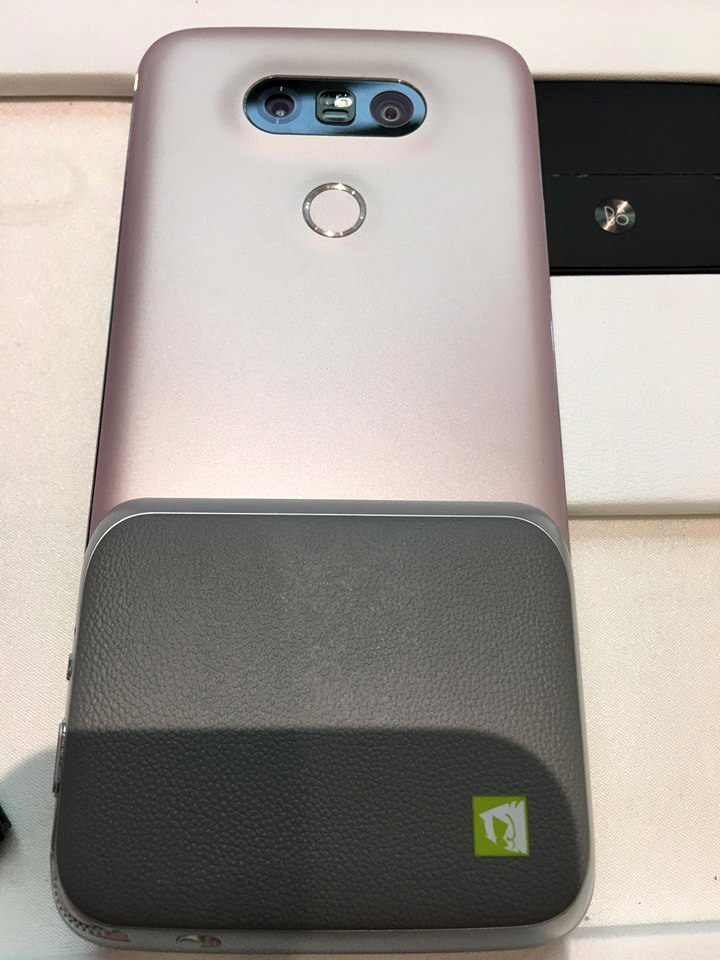 To minimize power consumption, LG redesigned the display driver IC memory and power management function so that the display’s backlight only illuminates one small part of the overall display. Thanks to this technology, the Always-on Display requires only 0.8 percent of the battery’s full capacity per hour to operate.

Another advanced display feature in the LG G5 is Daylight Mode, which gives the G5 exceptional outdoor visibility beyond that of current auto brightness technology. Daylight Mode detects surrounding light conditions and instantaneously increases or decreses the brightness of the display, up to 850 nits. Even before your eyes have adjusted to the different lighting conditions, the G5 will be ready.

Furthermore, the insulative antenna is invisibly integrated into the body without disrupting the seamless look of the metal uni-body. LG designers took the metal body concept one step further by adding a Shiny Cut edge for added contrast and a more comfortable grip.

The LG G5 is equipped with the powerful yet energy-efficient Snapdragon 820 64-bit processor, Adreno 530 graphics and lower-power Qualcomm HexagonTM DSP as well as Qualcomm Spectra 14-bit dual image signal processors (ISPs) designed to deliver high resolution DSLR-quality images and additional power savings. The Snapdragon 820 processor also has an integrated X12 LTE modem that supports Category 12 download speeds of up to 600 Mbps and LTE Category 13 uplink speeds of up to 150 Mbps. 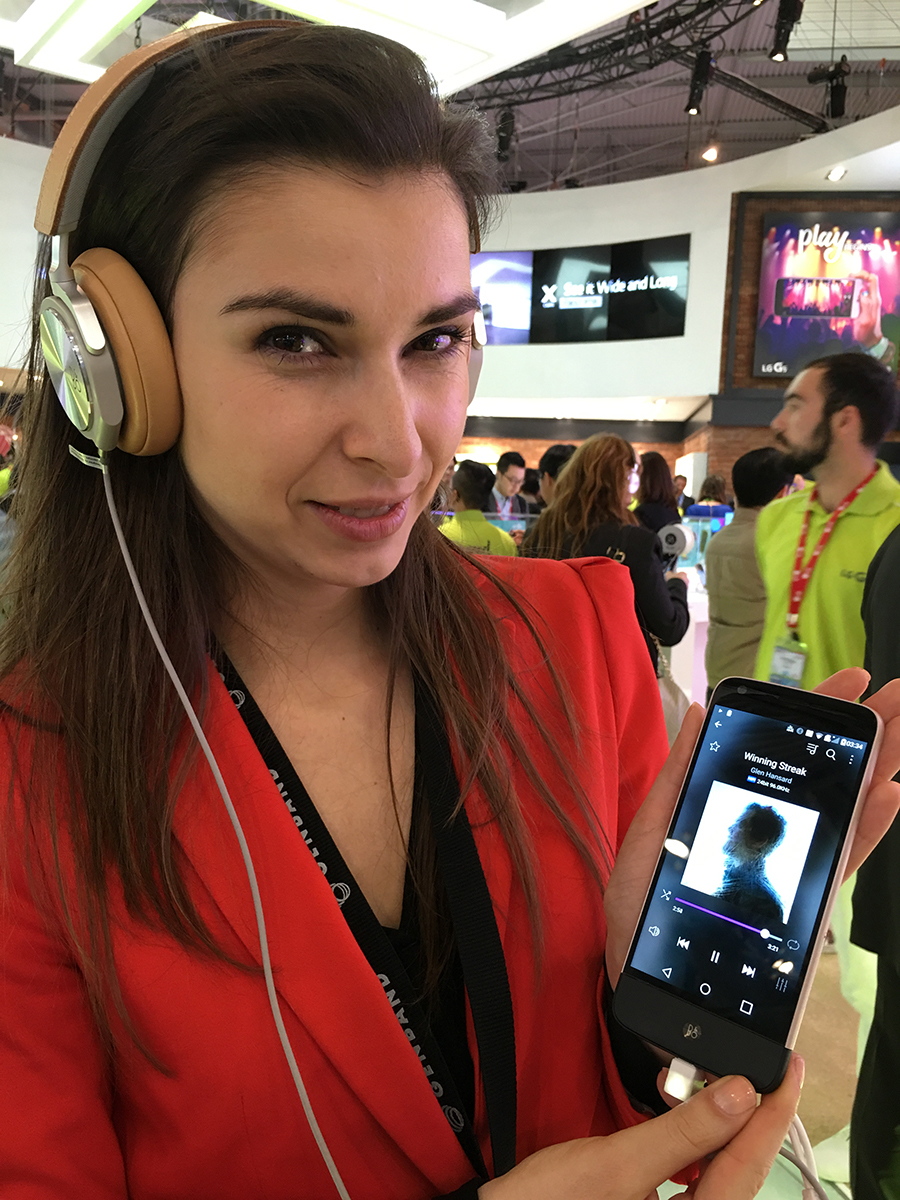 The LG G5 is also equipped with aptX HD, Qualcomm’s new enhanced codec that supports 24-bit sound over Bluetooth, when paired with the new LG TONE Platinum headphones. It offers Quick Charge 3.0 for incredibly fast charging, 27 percent faster and 45 percent more efficient than the previous generation. Connectivity includes Wi-Fi 802.11 a, b, g, n, ac, NFC and Bluetooth 4.2. It is also one of the first smartphones to feature USB 3.10 with a Type-C connector.

But the real innovation is the modular design giving the LG G5 the ability to transform into a digital camera, Hi-Fi player and more all while keeping its traditional removable battery. The LG CAM Plus is a versatile camera module that can be attached through the battery slot to deliver a comfortable grip and convenient control of a standalone camera. The LG CAM Plus provides physical buttons for power, shutter, record, zoom, LED indicator and comfortable grip. It also offers intuitive auto focus and exposure lock, features usually found on standalone digital cameras. When attached to the LG G5, it provides an additional battery capacity of 1,200mAh to allow for longer shooting times for more fun and enjoyment.

The LG Hi-Fi Plus with B&O PLAY features an ESS ES9028C2M + Sabre9602C DAC and amplifier to power both the jack socket, microphone, speaker and direct digital connection on the USB Type-C interface. The module can be used either with the LG G5 or as a separate Hi-Fi DAC by connecting to any smartphone or PC. 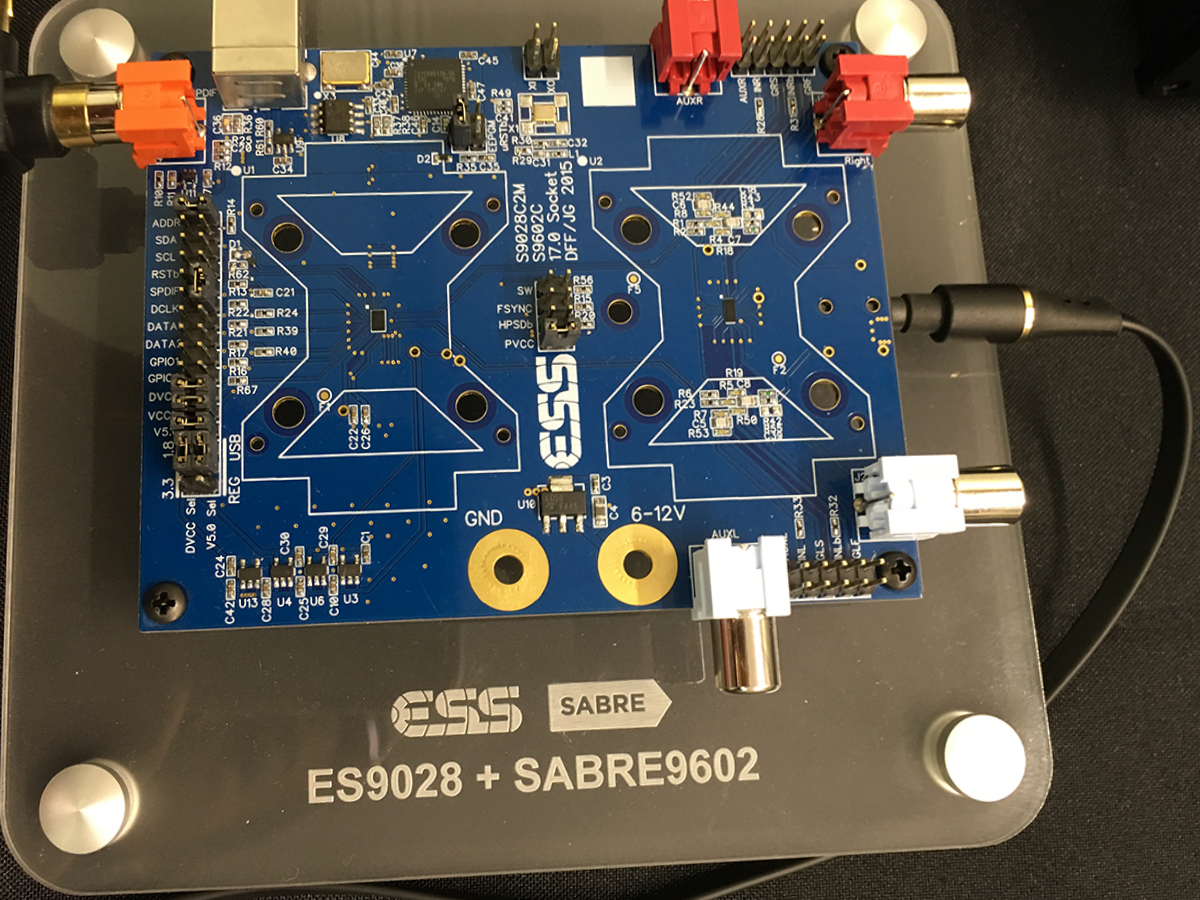 The LG 360 VR is a VR goggle that can be connected with the G5 via a dedicated cable and works exclusively with the G5 to simulate a 130-inch TV viewed from two meters away. It has a stylish design that is foldable so that users can easily carry and watch VR content anytime, anywhere. Unlike other VR devices that require a smartphones to be inserted in the device, the LG 360 VR weighs only 118g (4.16 ounces) and is just one-third as heavy as competing VR goggles while delivering a resolution of 639 ppi. The device is compatible with 360-degree images and videos captured with LG 360 CAM as well as all Google Cardboard content.

The LG Rolling Bot is a companion device that rolls like a ball while capturing images and videos with its embedded 8MP camera. Not just a toy, the LG Rolling Bot can be used as a monitoring system for the home, pet care companion as well as a remote controller for compatible home appliances. With an IP camera connectable via Wi-Fi, users can remotely monitor the interior of their homes with the LG G5 via live streaming. 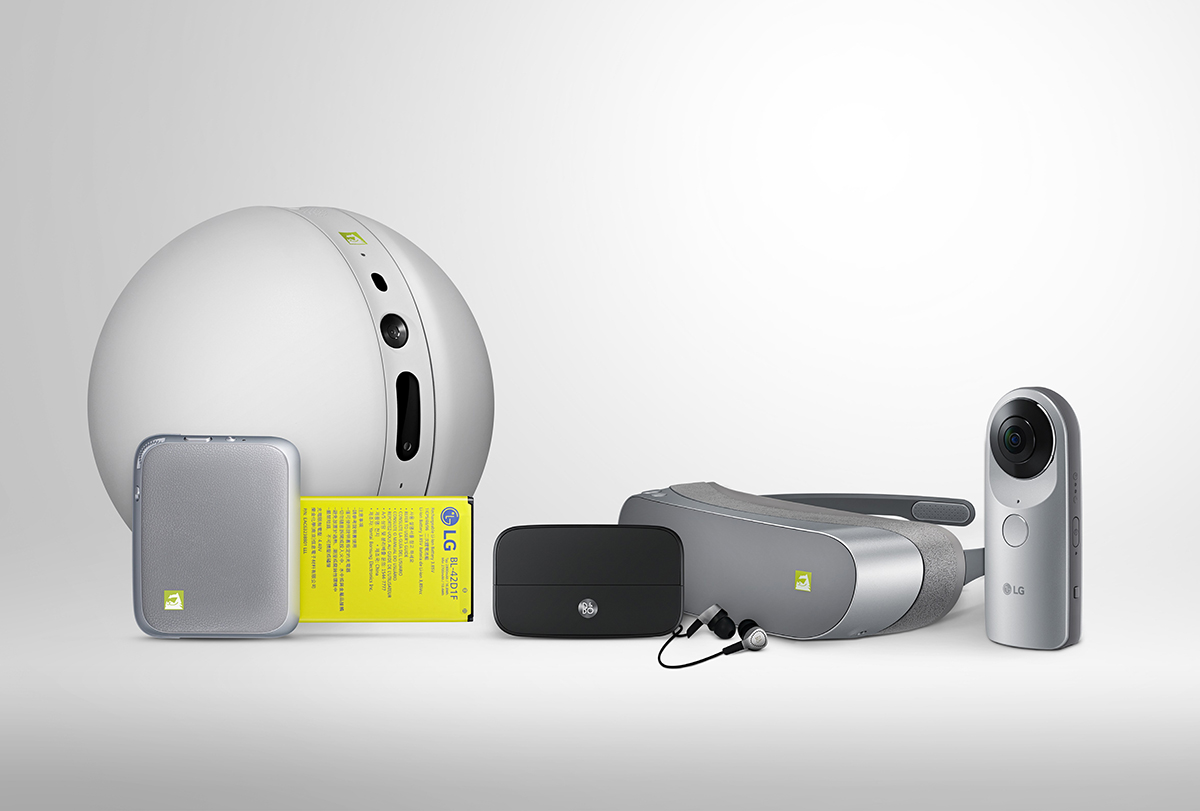 Only available in the LG G5, Friends Manager is the hub application that allows the G5 to connect with LG Friends with minimal fuss and effort. LG Friends Manager automatically detects nearby LG Friends and connects quickly and easily in three simple steps, eliminating much of the hassle of pairing devices.

H3 by B&O PLAY is a set of high-end earphones that is compatible with the high-quality sound of the LG Hi-Fi Plus with B&O PLAY. Designed for anyone who considers audio performance a top-priority in a smartphone, H3 by B&O PLAY works with all Android smartphones. 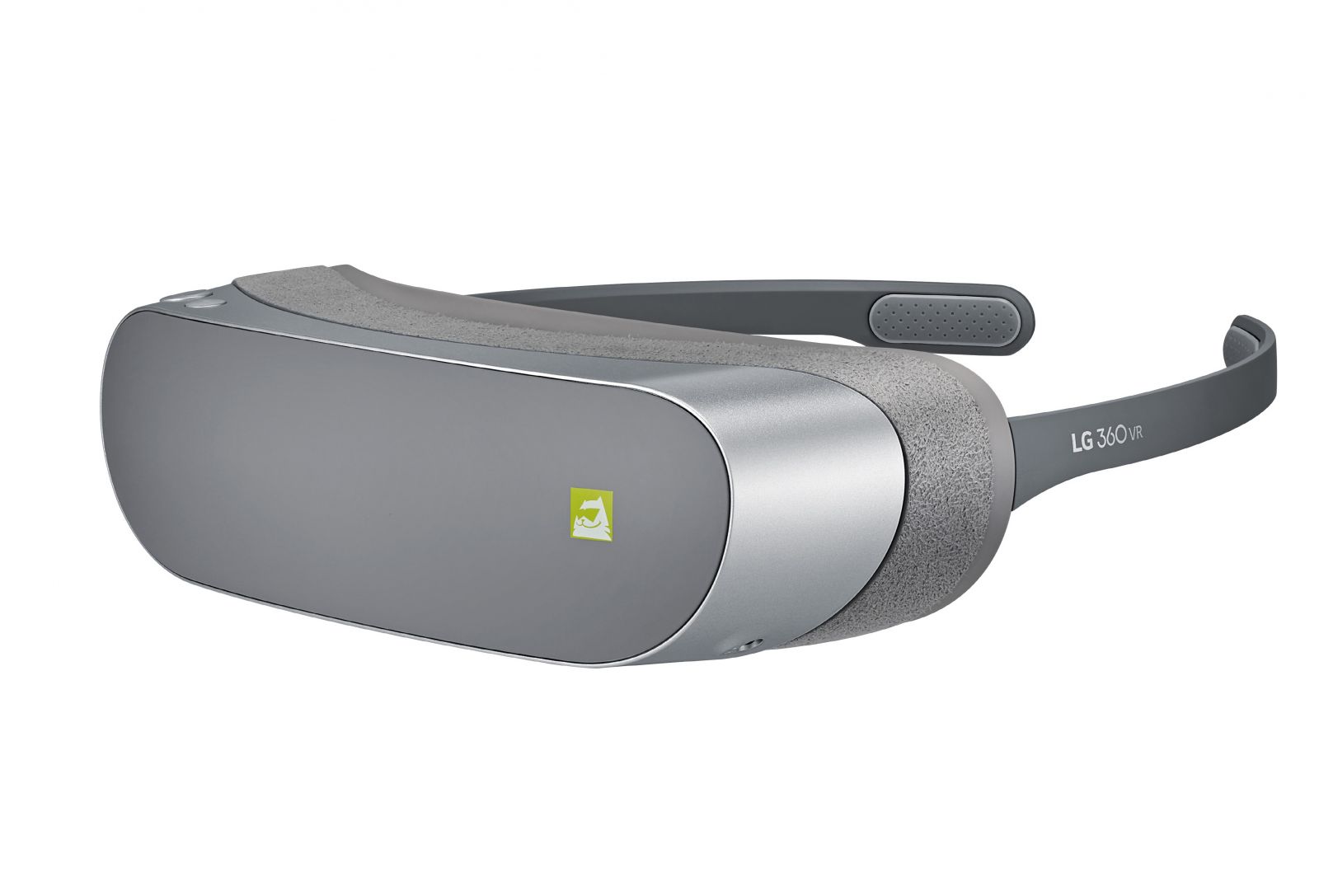 The combination of Cingo and HE-AAC delivers a truly authentic audio experience essential for virtual reality. Cingo renders stereo, surround and immersive sound over headphones incorporating head movements. Thus, movies in the LG 360 VR applications will immerse users and transport them in different virtual environments with perfectly matching audio properties for the success of the illusion.