Oscium’s iMSO-204L transforms an iPad, iPhone or iPod touch into an ultra-portable and intuitive two-channel oscilloscope. Since Apple changed the connector in the most recent iOS platforms, Oscium has been working to bring native Lightning compatibility and the iMSO-204L is the solution to the connector change.
The third generation of handheld engineering tools from Oscium the dual analog iOS oscilloscope iMSO-204L now features native Lightning compatibility. The iMSO-204L transforms an iPad, iPhone, and iPod touch into an ultra-portable, two channel oscilloscope.

When the original iMSO-104 was originally released, it won several awards and the iMSO-204 version improved both functionality and performance, making the iPad or iPhone a very compelling oscilloscope solution, adding a second analog channel and increasing the sample rate by more than a factor of four to 50 MSPS. The horizontal scaling has also been expanded (200 ns/div – 10s/div) and the sample depth is now 1000 points. The iMSO-204L features two analog plus four digital channels at up to 50 MSPS with 5 MHz bandwidth. 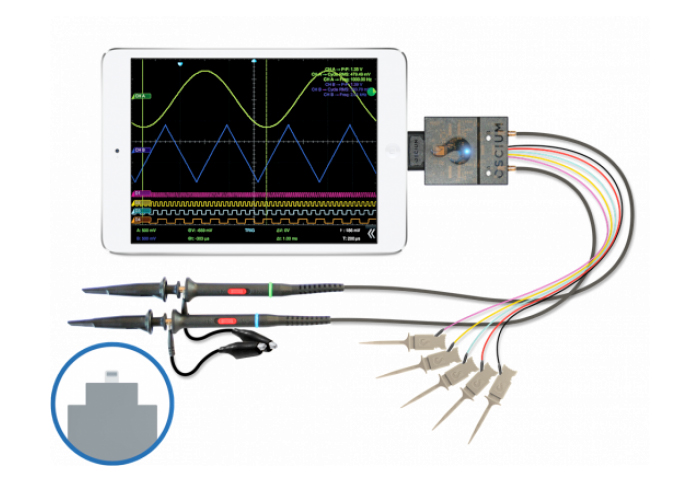 Understanding that tablets and smartphones would quickly outpace dedicated hardware in terms of processing power and convenience for the user, Oscium was among the first companies to launch a test and measurement solution for iOS mobile devices, introducing the first oscilloscope with a capacitive touchscreen and a truly intuitive experience. Oscium’s range of test and measurement tools combine hardware accessories and a touchscreen-based app for iOS.

Oscium’s iMSO-204L solution works with a free downloadable app available in the Apple App Store— the iMSO2 app—leveraging the easy-to-use interface of the iPad, iPhone and iPod. With the iMSO2 software, the solution allows single-shot waveform capture, waveforms can be paused and zoomed into, with immediate feedback while zooming the horizontal and vertical scales. Due the native resolution of Apple’s devices, waveforms are also sharper with more than four times the number of display points. With the recently introduced AirPlay compatibility, the oscilloscope display can be also mirrored onto compatible projectors and large screens, perfect for live demonstrations in classrooms. 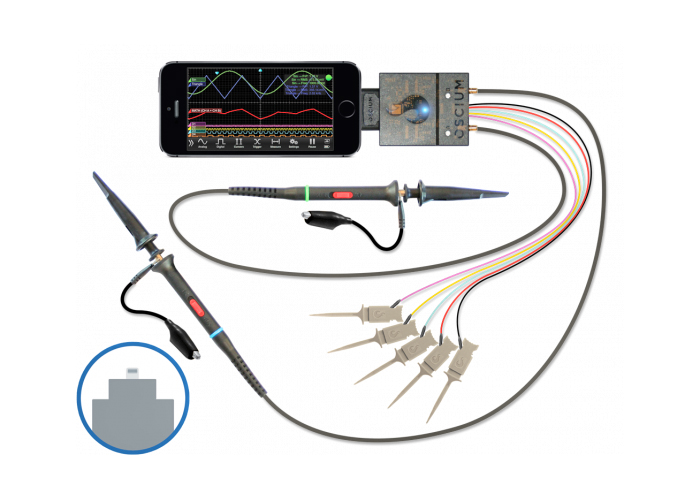