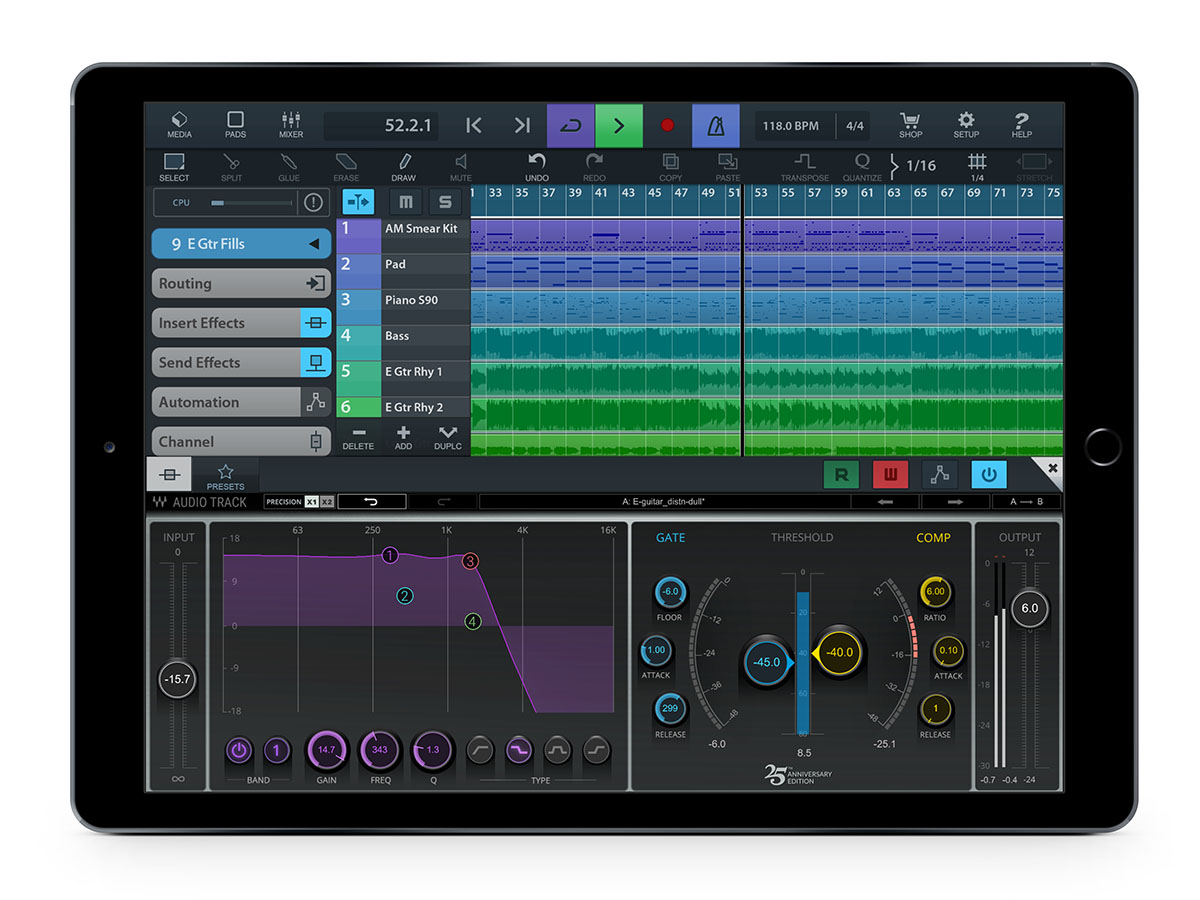 Cubasis is Steinberg’s sequencer app for iPad, similar to its Cubase music production system, providing the same look and feel as well as project compatibility for easy import to Cubase. Cubasis provides all the required tools to arrange, mix and edit music productions, including many effects and hundreds of instrument sounds.

Cubasis 2.3 now supports Audio Unit automation, the feature that unlocks recording of detailed instrument and effect apps parameter changes directly in Cubasis. The update also adds user presets support for both Audio Unit apps and internal Cubasis effects. Equipped with a library of over 200 ready-to-use effects factory presets and more than 70 FX Pack factory presets, Cubasis 2.3 remains one of the most powerful options for iOS-based mobile music production. The update also provides fixes and improvements addressing several user-reported issues throughout the application, reason why existing users receive the update as a free download.

With the release of Cubasis 2.3, Steinberg establishes a new milestone in audio applications running on portable devices. The latest iteration of the popular mobile music production app boasts new features and offers via in-app purchase three accolade-receiving effects by Waves.

The manufacturer of effect processors, Waves is celebrating their 25th anniversary this year with a debut on iOS, and a selection of studio-grade effects is for now exclusively available as in-app purchases in Cubasis. Debuting on the iOS
platform, Waves now made available revamped and reskinned 25th Anniversary versions of three of its classic plugins: AudioTrack Channel Strip, the L1 Ultramaximizer and Q10 Equalizer. Each effect can be purchased individually or together as a bundle.

As Mick Olesh, Waves EVP of Sales & Marketing, comments, “We are delighted to join forces with Steinberg, providing iPad users with Cubasis, along with access to our plug-ins and studio quality mixing tools, to help users polish tracks with professional sound within iOS-compatible music software. Waves’ availability for iOS is in line with our belief in open platforms, which goes hand in hand with our continual objective to faithfully serve all users, regardless of hosts, pro audio field or genres.”

“It’s always a fun challenge to do better than with the previous release of Cubasis, but I think our great team has done just that. We’ve come up with many improvements and user-requested features. And the absolute apex is that our friends at Waves have come on board with three of their highly acclaimed effects, available to the iPad for the very first time. Together, both Cubasis and the Waves effects for the iPad complement themselves perfectly and provide a complete and professional solution for producing music,” states Steinberg’s Team Lead & Product Planning Manager, Lars Slowak.

The first plugin by Waves, the Q10 Equalizer, is a multiband paragraphic EQ with up to 10 bands of precision equalization for mixing and mastering. It is a go-to tool for both surgical repair and gentle coloring. Each band offers six different filter types and complete control of gain, frequency and Q. And unlike most multiband equalizers, each Q10 band can use any filter type, so there is immense flexibility when shaping a signal. It is configurable as either two independent mono equalizers or as a precisely ganged stereo equalizer.

Waves AudioTrack is a CPU-light plug-in with pristine sound quality and serving the needs of a full channel strip within a single interface. It includes three processors – EQ, compression and gating, and functions like a mixing console’s channel strip. The four-band paragraphic equalizer provides bell, high-pass, low-pass, and shelving filter options. Its dynamics section includes a fully adjustable compressor/expander and gate. Input and output faders allow for proper gain staging, and dynamics and output meters enable accurate visual feedback. Users can open multiple instances, one per channel, and avoid the need to jump back and forth between separate equalizer, gate and compressor plugins. AudioTrack now executes 32-bit floating-point processing at 64 bits.

Finally, the popular Waves L1 Ultramaximizer, is an essential plugin for mastering, and the first software unit to offer a brick wall limiter. With only two major controls, quick and simple to use, the L1 is an advanced-level maximizer, look-ahead peak limiter and high-resolution re-quantizer – a powerful industry-standard all-in-one plugin for mastering and mixing. New 25th anniversary features include True Peak domain setting to eliminate inter-sample clipping, and Automatic Release Control, to automatically adjust release time.

Cubasis 2.3 and Cubasis LE 2.3 are available now as download through the App Store, with the Full Feature Set IAP versions including all plug-ins, or separate purchases of the Waves IAPs, as well as the Waves IAP Plug-in Bundle. Until December 5, Steinberg is offering great discounts on both Cubasis 2.3 and the FX Pack IAPs.
www.steinberg.net/cubasis | www.waves.com
related items