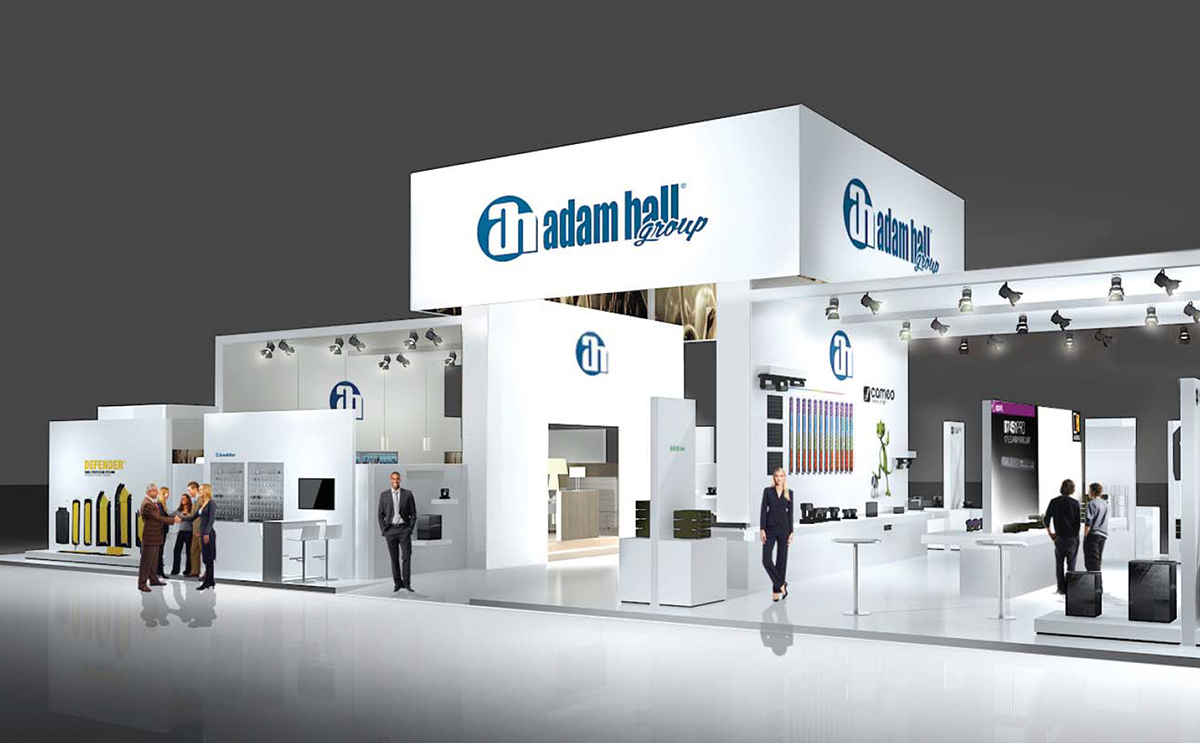 Adam Hall will now present an overview of their extensive portfolio at the Prolight+Sound 2016 show, from 5 to 8 April, including its new microphone stands brand Gravity - a very strong entrance in this market segment, already the winner of an iF Design Award 2016. Adam Hall is a now a four-time winner of the iF Design Award for its brands LD Systems and Gravity. LD Systems products such has the CURV 500 and Maui 5 portable PA systems and VIBZ series audio mixers have also won the renowned iF Design Award 2016 for exceptional design, out of over 5,000 submissions from 53 countries. Products from exclusive distributor brands, such as Eminence speakers, will also be exhibited across its impressive exhibit at Porlight+Sound 2016, wut almost 400 sq. m. 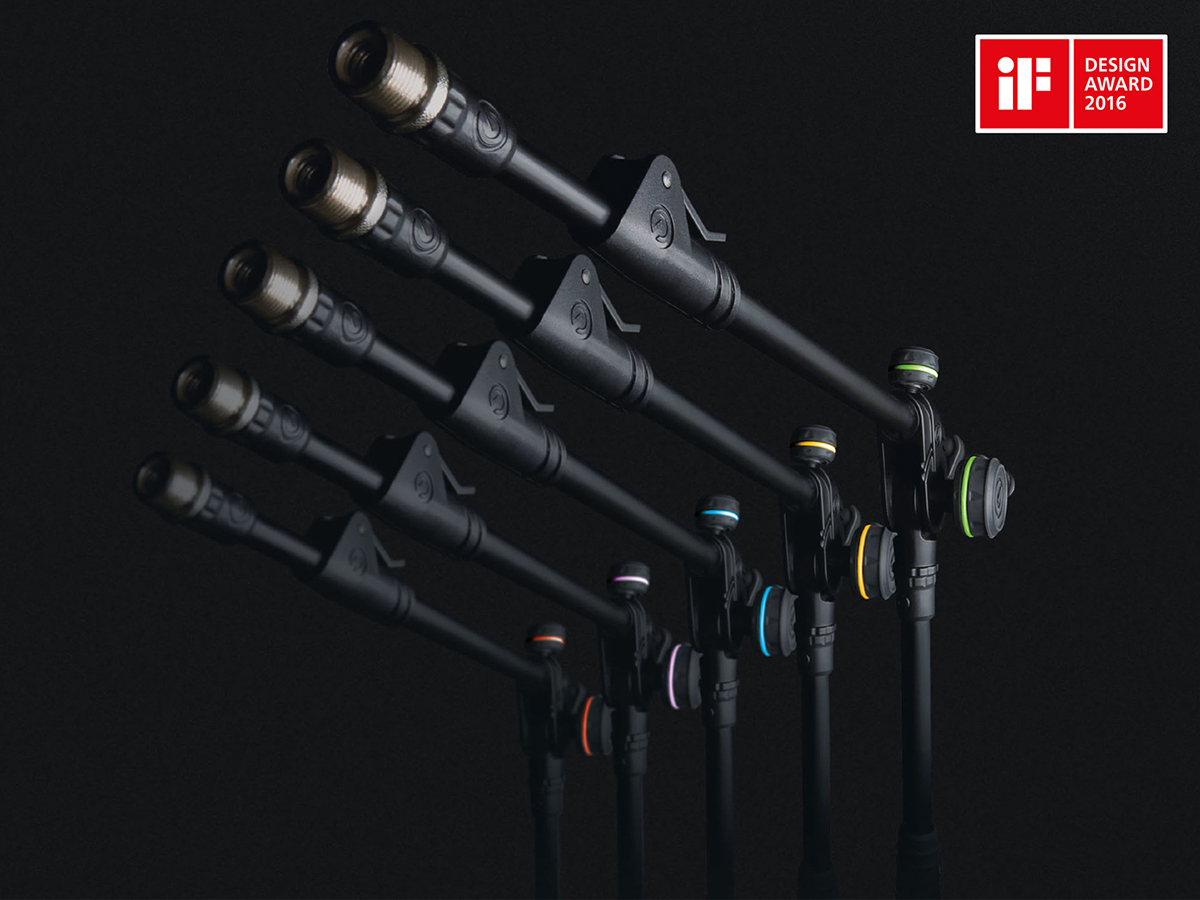 Adam Hall Group will also exhibit at the Musikmesse 2016 show - April 7 to 10. The new stands brand Gravity will be featured in hall 11 (E48) of the Musikmesse, together with Palmer music products and Adam Hall Cables. Gravity stands feature an interchangeable color-coded labelling system, and numerous new design features. Gravity is also the official stand provider for the 2016 Musikmesse stages and the new business lounge in hall 11. 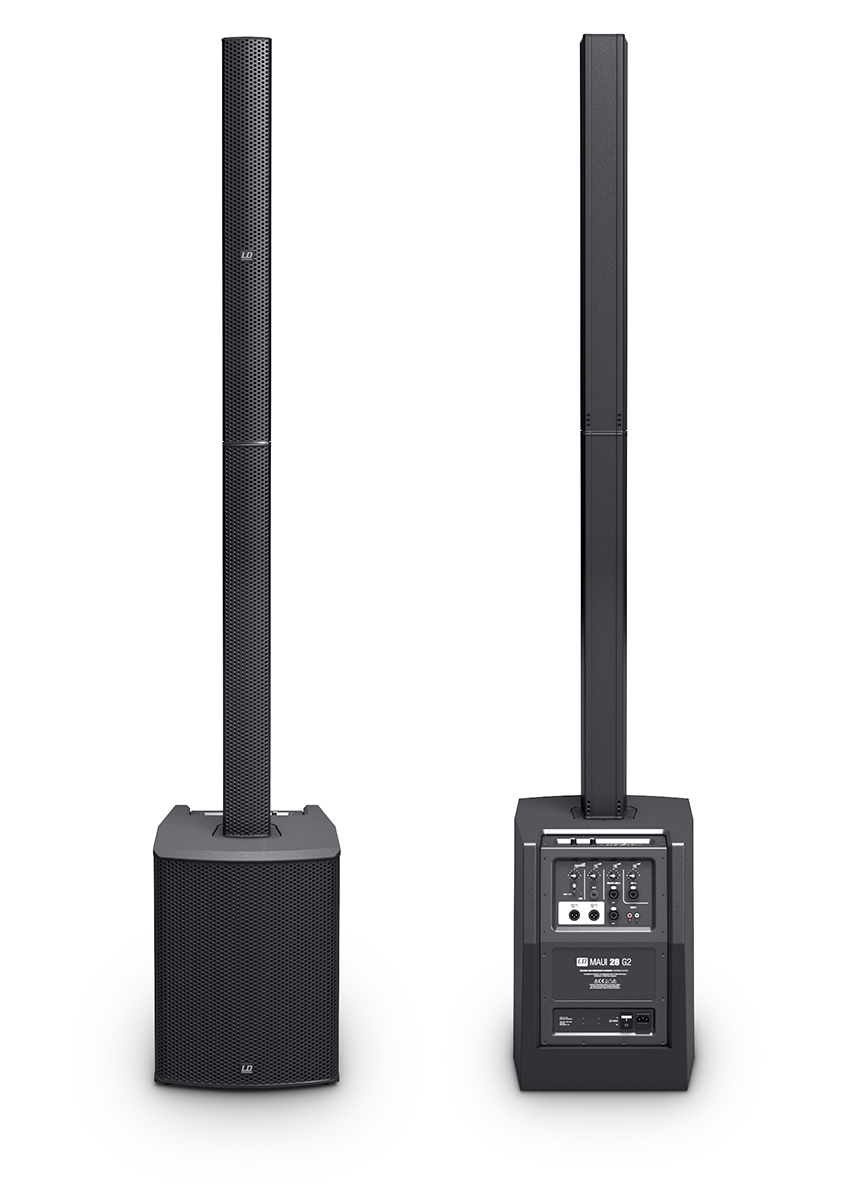 The winners of multiple prestigious design awards worldwide, the ultra-compact LD Systems MAUI 5 column system from the extensive Maui range and the innovative new CURV 500 array concept will be just two of the many highlights at the Adam Hall Group booth.

A new generation of the Maui range will be revealed for the first time in the form of the MAUI 28 G2 and MAUI 11 G2, compact, active column PA systems with DSP-based signal processing, Bluetooth and a four-channel mixer. Both the overall sound and dispersion have been improved plus the weight has once again been 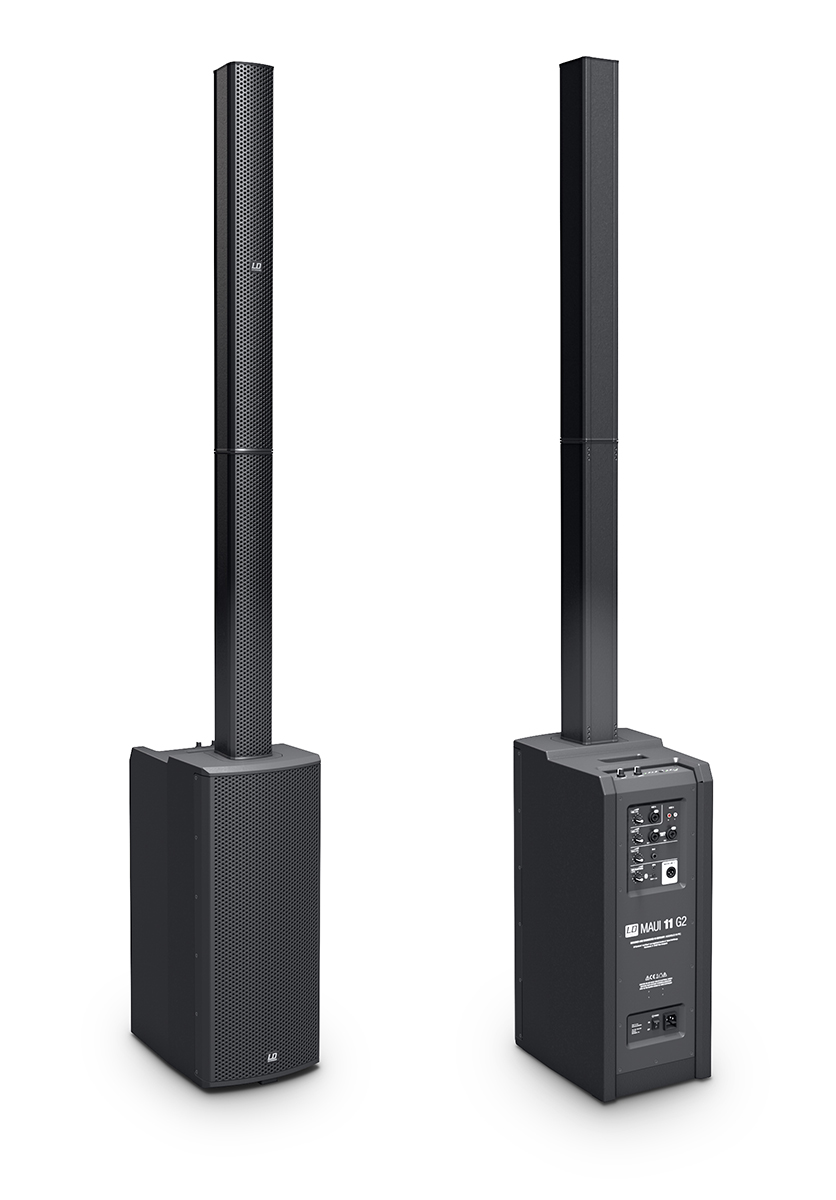 significantly reduced. The MAUI 28 G2 and the slender MAUI 11 G2 will be available in two versions, with a black or white enclosure. The main new feature of the MAUI 11 G2 is its two-part speaker column, which makes it far easier to transport.

A further new innovation is the in-house developed Adam Hall FliteCAD 2016 design and software platform, which is being presented live at a trade fair for the first time. This not only enables the flight case manufacturers to quickly and easily design cases in line with customized requirements but also to visualize and offer customers its entire range of products on its website in a device-independent manner with the FliteCAD Online Marketing Module.

“Prolight+Sound and Musikmesse in Frankfurt are among our most important international events. In 2016, we will be exhibiting with a brand-new stand concept. A wide array of innovations as well as the opportunity for personal discussions await our business partners, customers and other interested parties,” says Markus Jahnel, COO Adam Hall Group. 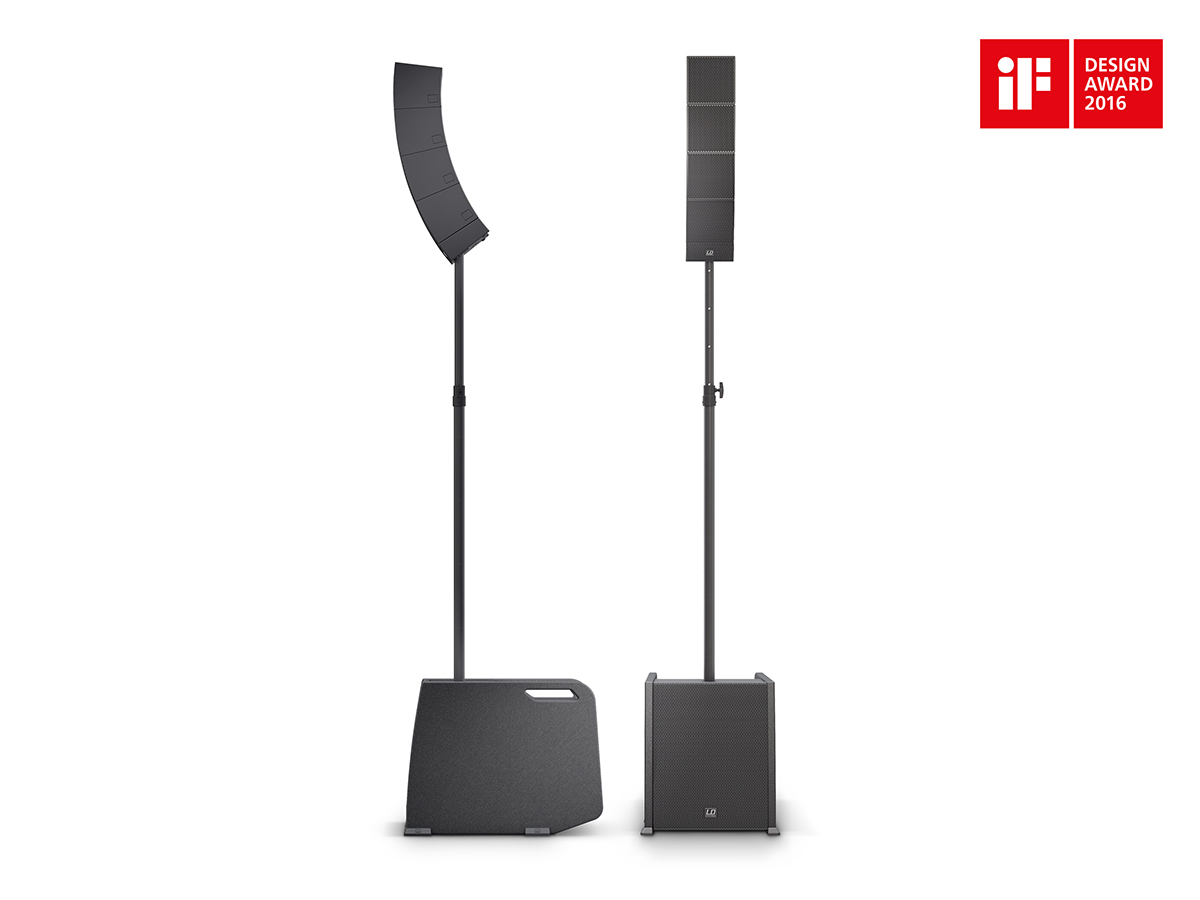 CURV 500 system
Flexibility is just one of the many advantages offered by the ultra-compact CURV 500 array system, with a choice of three sets for mobile or permanent installation. All are lightweight and feature far-reaching dispersion using WaveAhead technology to maximize SPL and frequency balance. The unibody aluminum construction of the CURV 500 array satellite and the unique SmartLink plug-and-play adapter are some of the outstanding features of the CURV 500 system, combining also a built-in 4-channel mixer with state-of-the-art Bluetooth wireless and a digital effects section.

The CURV 500 series has won a number of international awards and has recently been expanded. The CURV 500 IAMP is a class D four-channel system amplifier with DSP. 4x 150 watts at 8 ohm and 4x 300 watts at 4 ohm provide enough power reserves for a variety of applications. The powerful 1U compact amp offers an eightfold parametric equalizer for every channel, including delay functions of up to 48 m per channel make setting up delay lines possible.

The passive CURV 500 ISUB powerful subwoofer features a 10-inch speaker in a bass-reflex cabinet able to handle 300 watt RMS @ 4 ohm, and respond from 47 Hz to 150 Hz. This new installation subwoofer is available in a white or black housing, each with a robust 15 mm wooden construction. Compact dimensions, a low weight of 14.5 kg, and a subtle surface allow the CURV 500 ISUB to be discreetly positioned. The integrated wall mount means that the slim subwoofer can be easily installed anywhere. 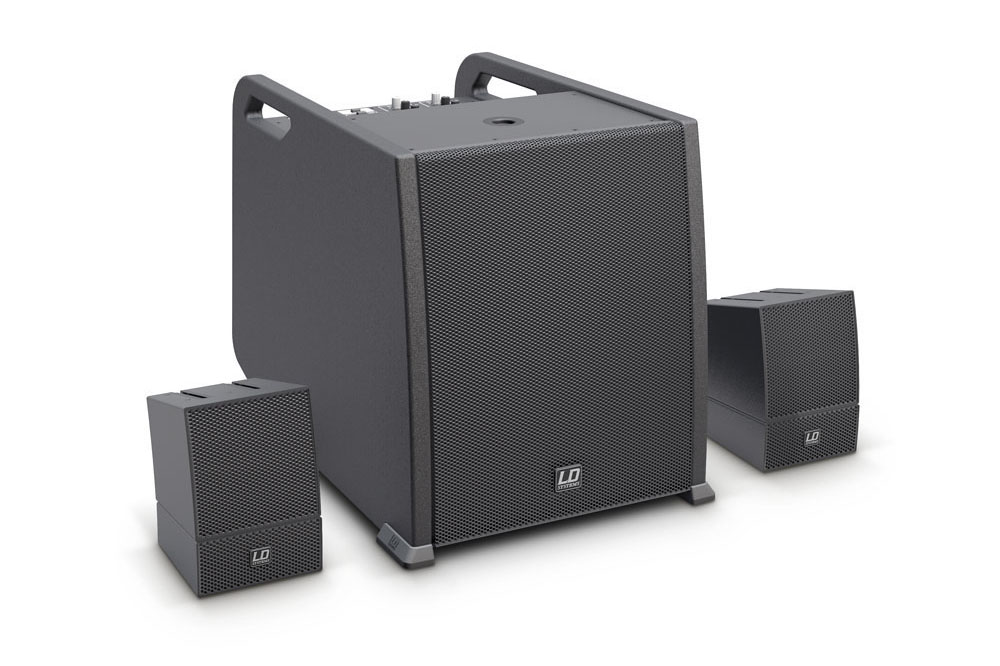 Recently introduced at Integrated Systems Europe (ISE) show in Amsterdam, the new LD Systems CURV 500 AV Set compact array system was designed from scratch and is also part of the CURV 500 series. The CURV 500 AV Set was designed for hotels, fashion stores, bars, clubs, studios and even as an home entertainment system. With 380 watts of RMS power and a maximum sound pressure of 122 dB, the CURV 500 AV Set can sit discreetly in the background while still making itself heard to the full. It boasts a 10-inch bass reflex subwoofer with a class D amplifier, a limiter, protection against short-circuiting, overheating and overvoltage, as well as a 4-channel mixer with 16 digital effect presets and Bluetooth.

Combo and speakON-compatible sockets offer a range of connection options. The subwoofer also has four digital system presets, an M20 threaded flange and three ergonomic handles. Both satellites are operated by the SmartLink adapter. The compact 12 x 12 x 12 cm elements with LD Systems WaveAhead technology each contain one 4-inch and three 1-inch drivers for a consistent, extremely detailed playback with high pressure and dynamics.

With the optional mounting systems for walls and ceilings, the satellites can be securely installed anywhere where good sound and unobtrusive equipment are required. For additional power, a total of eight array satellites can be used for stereo playback (max. four per side). Black and white housings also let the AV Set integrate seamlessly into the surrounding architecture.

Dante spoken here
As announced early 2016, the Adam Hall Group and Audinate entered a partnership to implement Dante network systems into newly developed Adam Hall Group ProAudio products. “Thanks to the integration of this high-end interface into our products, we will be able to easily develop network solutions in terms of integration, control and stability. This will drive the already broad and high-quality product range of our own brands and retail brands into an even more professional segment, as well as meet future requirements. This is where the almost universal compatibility is very important to us, and which already convinced me from my daily use of it for previous projects," said Tom Mikus Global Integrated Systems Director at Adam Hall Group.

This new amp features a fully-integrated Dante network, a high-performance DSP and controllability via USB and Ethernet using external control PC software and can be operated as a two or four-channel device. An impressive four kilowatts provide plenty of power reserves as 4 x 1,000 watts at 4 or 2 ohms or 2 x 2,000 watts (bridge mode) at 8 or 4 ohms. Maximum operational reliability is also guaranteed at 2 ohms. The PFC (Power Factor Correction) power supply unit guarantees steady voltage and helps prevent line disturbances. Comprehensive safety features permanently protect the power amps and the system, even in tough situations. FIR/IIR filtering, EQs and crossovers, as well as delay functions, are all part of the overall technology.

An extensive preset library is available in the DSP 44 K for LD Systems speakers. This not only optimally protects the premium speaker systems, but also ensures optimum adjustment in line with room acoustics and premium functionality.
www.ld-systems.com | www.gravitystands.com
www.adamhall.com
related items