Richard Honeycutt reviews the second and more extensive edition of this electronics classic, Fundamental Amplifier Techniques with Electron Tubes. He gives high marks to this massive tome that provides useful information about electron tube technology, including their power supplies, for the design and DIY construction of these electron tube audio amplifiers.
My first electronics books were course books on radio servicing and radar, given to me by my dad. The first electronics book I bought was the 1963 RCA Receiving Tube Manual, which — at a price of $1.00 — came to about 2.2 cents/cubic inch. (At that time, McDonald’s hamburgers had not gotten to my hometown, but when they did, a few years later, they cost 19 cents each. Gasoline was 15 cents per gallon.) My first physics text when I entered college in 1966 cost about 31 cents/cubic inch. When Rudolf Moers’ first edition of Fundamental Amplifier Techniques with Electron Tubes was published in 2010, this mammoth volume (822 pages in an 8” × 11” format) only cost about 50 cents/cubic inch. 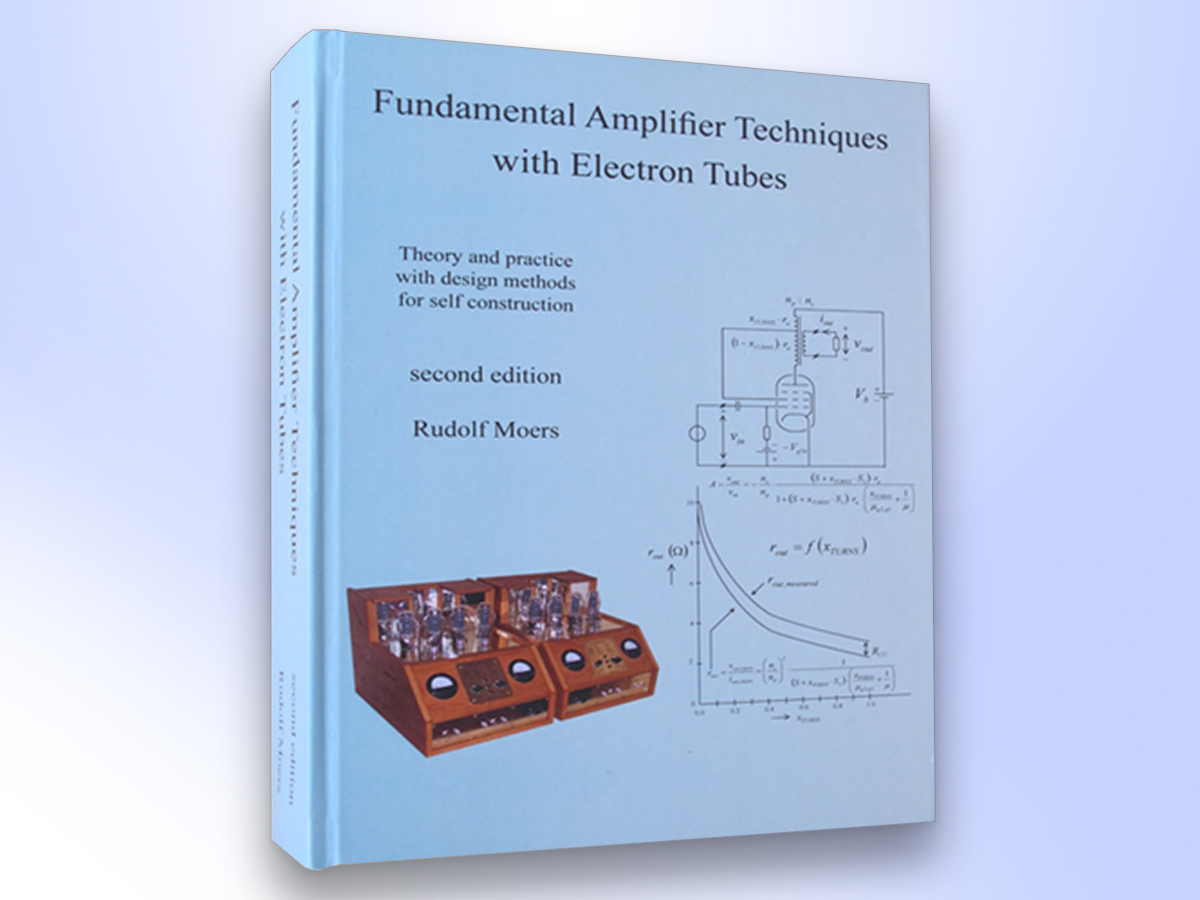 In my review of Moers’ first edition in the April 2012 issue of audioXpress, I stated that the author “presents a 21st-century perspective on the science of hollow-state design as applied to amplifiers and power supplies. Beginning with the principles of electron emission, the book progresses through standard vacuum tube varieties: diodes, triodes, tetrodes, and pentodes, after which it covers such general principles as frequency-dependent behavior, nonlinear distortion, noise, and negative feedback. The book concludes with a chapter on the construction of electron tube amplifiers.”

In his second edition (922 pages in an 8.5” × 12” format), which — at a price of under 28 cents/cubic inch, the same summary is true. Moers describes the aim of his second edition as being able “to give you useful knowledge about electron tube technology in the application of audio amplifiers, including their power supplies, for the design and DIY construction of these electron tube amplifiers yourself.” In this aim he completely succeeds.

The author discusses the physics underlying electron tube operation far more comprehensively than did any of his predecessors. He does this in a way that maximizes presentation of principles while minimizing unnecessary mathematics. In many cases, the physical explanations can be skipped by those whose only interest is design methods. For the reader who does take advantage of the physical explanations, Moers’ inclusion of an eight page listing/definition of mathematical symbols makes the explanations easy to follow.

The author assumes that the reader knows basic AC and DC circuit theory and algebra, although the novice can understand the thrust of the explanations even in the absence of these basics. As is often true when reading the works of authors whose native language is not one’s own, the reader must become accustomed to some differences from common American- and British-English terminology. For example, what Americans and Brits call a “commoncathode” or “grounded-cathode” amplifier stage is identified by Moers as a “basic cathode” stage. What we call a “phase splitter” is called a “phase shifter” in this book. But such minor linguistic issues are few and easily handled.

The additional 86 pages in the second edition include more extensive coverage of vacuum diodes, incorporating formulae more accurate than the common ones for output voltage of a loaded capacitor-input filter driven by a half- or full-wave rectifier. The chapter on pentodes now contains extensive analysis of David Hafler and Herb Keroes’ ultralinear amplifier circuit (more descriptively named—as Moers reminds us — the “screen grid negative feedback amplifier”). In this analysis, the book clarifies whether the screen-grid tap of the output transformer, variously given as a “40%” or a “43%” tap, is referring to the percentage of primary turns or the percentage of primary impedance.

The book then examines the effect on output-stage linearity for both interpretations of the percentage, as well as discussing whether maximizing this linearity also minimizes distortion. He does this using a single-ended model, which can be generalized to predict the behavior of push-pull output stages.

The new edition of Fundamental Amplifier Techniques with Electron Tubes concludes with eight appendices containing some characteristic curves for the EL84 and the KT88. As I stated in concluding my review of the first edition, “anyone who wants to go beyond the Heathkit level of tube amplifier understanding owes it to him/herself to buy and study this excellent volume.” To this recommendation, I now add the comment that even if you have the first edition, the new material in the second edition is more than worth the price. aX