David Logvin had the privilege to use, measure, and put to the test the Dayton Audio HTA20BT Hybrid Stereo Tube Amplifier. As he could confirm, there's something special in this amplifier that combines a tube preamp and Class-D power stage, which can also be used as a headphone amplifier, and features a digital media player and Bluetooth streaming capabilities. All at a very affordable price and with the build quality of a Dayton Audio product. This article was originally published in audioXpress, July 2019.
Hybrid Power for All

What do a 10th century Danish king and two English engineers (one working at the dawn of the 20th century and the other prominent mid-century) all have to do with a hybrid stereo tube amplifier? Enter Dayton Audio’s HTA20BT.

Modern-day Bluetooth (BT) technology is named for 10th century Danish King Harald Blatland, famous for unifying Scandinavia (as well as sub-par dental health, with teeth that were notable for a black or blueish hue). Thermionic valve technology (aka vacuum tubes) was patented in 1904 by the English engineer John Fleming. Ubiquitous today, Class-D amplification was first made commercially available in the 1960s by Clive Sinclair of London-based Sinclair Radionics.

All three of these technologies (Bluetooth wireless, vacuum tubes, and digital amplification) are combined in Dayton Audio’s HTA20BT, a new hybrid tube amplifier with built-in Bluetooth streaming (see Photo 1). This device provides an outstanding (and improbable) feature set that is unlike the offerings from older and more traditional consumer electronics brands. This integrated amplifier incorporates Bluetooth streaming and is built around a pentode vacuum tube preamplifier with a Class D power amplifier section. 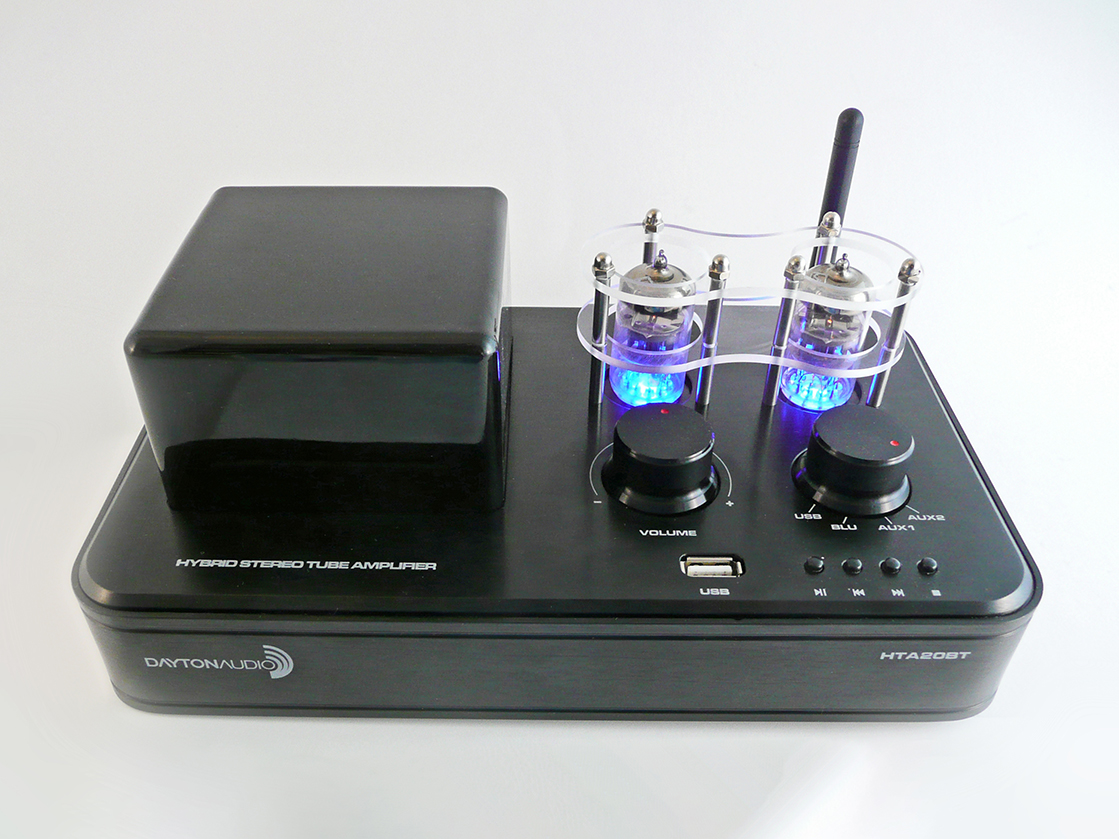 Blue LED backlighting complements the soft amber glow of the vacuum tubes, so even the illumination sources are a hybrid. And if the feature set and more than 100 years of technological combinatorial artistry aren’t quite enough for you, the Dayton Audio HTA20BT can also do double-duty as a vacuum tube headphone amplifier!

Mechanics and I/O
Physically, this amplifier is quite interesting. The housing is finished in a brushed and black anodized aluminum chassis. A large power transformer sits under an ABS cover. In addition, a pair of 6F1 pentode vacuum tubes (protected by acrylic finger guards) and a 2.4 GHz antenna mast quickly inform the casual observer that this is not your typical audio experience.

Passive cooling is provided by ventilation slots on the bottom of the steel base. Mains power is 120 V, 60 Hz via a non-detachable cord set and the rocker power switch is located on the back panel. The top panel features two well-proportioned knobs — one for gain control and the other for input selection. The knobs are plastic, but they have a nice molded texture and feel. A USB 2.0 port provides an onboard media player and direct local access to MP3, APE, WMA, WAV, and FLAC digital files via a personal USB thumb drive. There are also four small buttons for local digital file or Bluetooth Audio/Video Remote Control Profile (AVRCP) control. The buttons have a good tactile feel, though they are undersized for some hands. 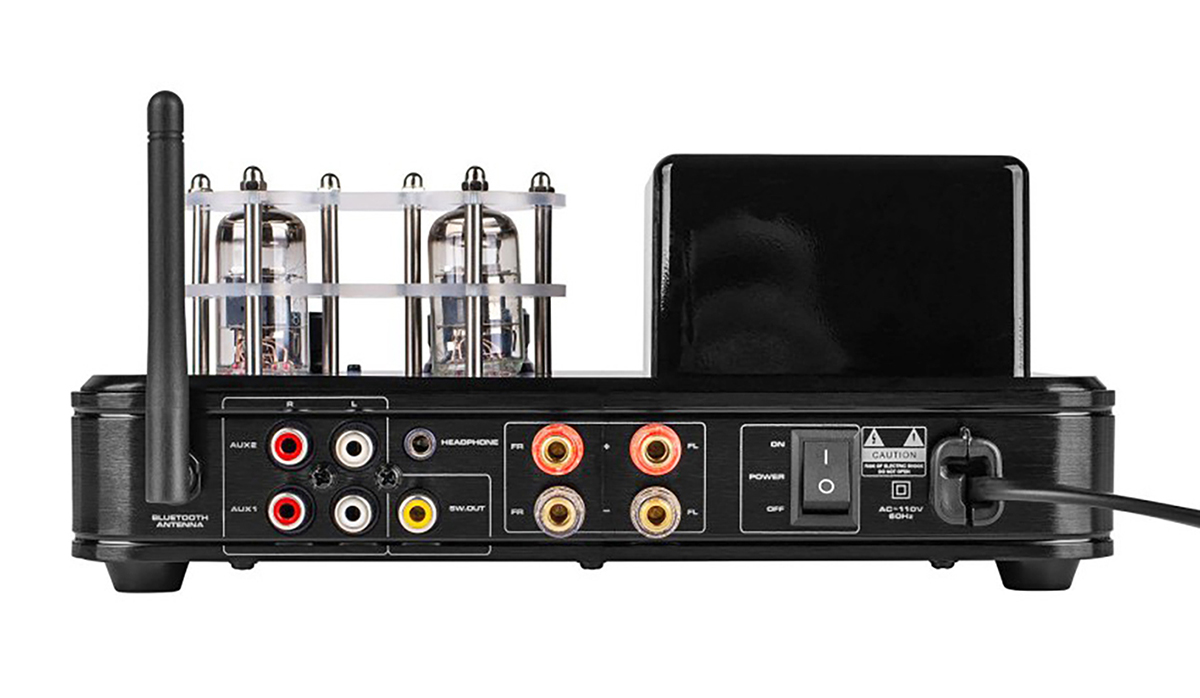 Continuing the 360° “tour de amp,” the inputs and outputs are impressive. There are two analog inputs via RCA connectors, as well as an external 2.4 GHz antenna for optimum Bluetooth 4.2 reception. Bluetooth 4.2 standards specify a 10 m range indoors (and up to 50 m in a free-field environment). The inclusion of the external omni-directional antenna, instead of a compact chip antenna, provides outstanding wireless performance. Bluetooth testing in my home exceeded the 10-m range, going through plaster walls, piping, and more with zero dropouts throughout my testing of this product.

Outputs consist of two pairs of compact binding posts that accept up to 14 AWG wire. There is a subwoofer monophonic RCA connector allowing an elegant option to deploy this in a 2.1 system. Additionally, a 3.5 mm headphone output is also provided, permitting the use of vacuum tubes with your favorite set of headphones.

This article was originally published in audioXpress, July 2019.