Book Review: How to Design and Specify Loudspeaker Drivers

Our longtime columnist Richard Honeycutt shares his insights on Geoff Hill’s recently released book, Loudspeaker Modelling and Design: A Practical Introduction, which demonstrates modern software and hardware being applied to the processes behind loudspeaker design and modeling. Learn more about this indispensable work, now available from publisher Routledge / Focal Press. This article was originally published in audioxpress, February 2019. 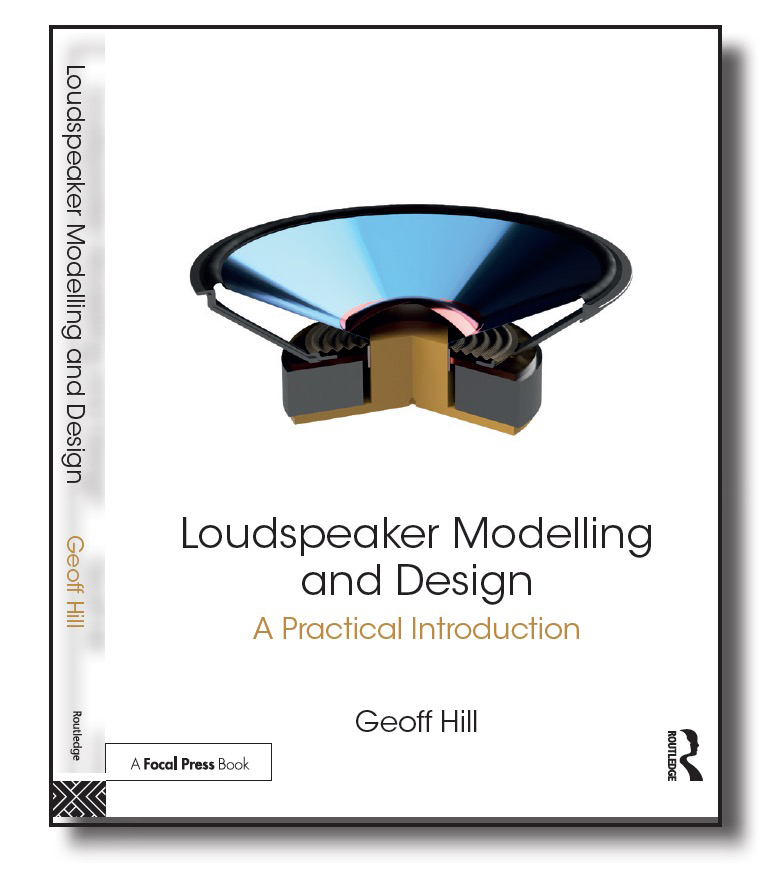 Ever since the introduction of the dynamic loudspeaker by Edward Kellogg and Chester Rice in 1925, hobbyists and professionals have been interested in building these electroacoustic marvels. In order to work optimally, loudspeakers require some sort of enclosure. These were fair game for hobbyists, as experimentation, or building a finished product, only required competence in woodworking. Not so with the driver — the loudspeaker itself. By far the greatest focus among speaker-loving amateurs has been enclosure design: open-back, sealed, ported, horns, and various combinations.

For many years, information on drivers was available only in patent documents or the journals of professional societies. Even when information appeared in books such as Harry Olson’s Acoustical Engineering or Leo Beranek’s Acoustics, it was largely theoretical. Olson included illustrations and discussion of the effect of cone profile, and both books covered the theoretical aspects of magnetic field strength and directionality’s dependence upon cone diameter.

Electro-mechano-acoustical equivalents of speaker behavior permitted physicists and mathematicians to investigate the behavior of highly simplified models — within certain limits. But driver design was largely the domain of professionals, and was as much an art as a science, passed along by mentors. In the latter decades of the twentieth century, new computer-modeling tools became available for predicting the actual performance of loudspeaker drivers. These tools included Finite Element Analysis (FEA), the Boundary-Element Method (BEM), 3-D modeling, and other methodologies.

Engineer/Author Geoff Hill has spent much of his career employing these state-of-the-art technologies in designing loudspeakers, and his latest book concisely presents the how-to’s he has learned and employed as an engineer for Goodmans and other speaker manufacturing companies, and as a consultant at Hill Acoustics.

Loudspeaker Modelling and Design discusses exactly what the title advertises. It is intentionally very light on theory and math, and does not cover manufacturing methods at all. Thus, it is primarily of interest to budding loudspeaker engineers. It will appeal to those amateurs who just want to understand the process of designing a loudspeaker using up-to-the-minute tools.

Even DIY-ers who have access to a fully equipped machine shop will not be able to “roll their own” drivers using the information in this book, because of unavailability of parts — cones, voice coils, surrounds, magnets, pole pieces, top plates, baskets, etc. — in small quantities.

For the professional engineer just starting to engage in speaker design, the book can act almost as a mentor, starting with creating a project schedule and a bill of materials. From there, it guides the reader through the process of modeling a speaker (with emphasis on the driver, not the enclosure), and simulating the magnetic, mechanical, and acoustical behavior of the unit as each subsystem is designed. Hill illustrates the design/modeling/simulation process using a number of software packages, many of which are available as shareware.

The book is laid out in nine parts. The first four, comprising 15 chapters, provide an introduction, basic theory, the concept of modeling, and a quick run-through of the design process. The five chapters of Part 5 cover the inner workings of a speaker driver. Part 6 uses seven chapters to introduce the use of FEA, BEM, and integrated modeling methods. Parts 7 and 8 (three chapters each) discuss mechanical design and the science of measuring a loudspeaker, respectively. Part 9 includes appendices C through K and M, which demonstrate the use of the various software packages employed in modern loudspeaker development. Appendix A is a glossary, and B is a reference list of books and websites for learning about loudspeakers. Appendix L covers statistical analysis, an essential topic for a designer of loudspeaker drivers for manufacture.

Before diving into Loudspeaker Modelling and Design, a novice, even one having a BS or equivalent in Electrical Engineering, will benefit from familiarizing him/herself with the background information found in such books as Olsen’s and Beranek’s volumes mentioned earlier, as well as Loudspeaker and Headphone Handbook (ed. By John Borwick) and Glen Ballou’s Electroacoustic Devices: Microphones and Loudspeakers, plus books on loudspeaker system integration such as Vance Dickason’s Loudspeaker Design Cookbook to gain an understanding of the variables at play in loudspeaker operation and optimization.

Membership in the Audio Engineering Society provides access to a mind-boggling array of original papers on loudspeaker-related subjects. But Geoff Hill’s book fills a unique niche in providing insight into the methods actually used in designing loudspeaker drivers. If you’re interested in loudspeakers, you should certainly consider buying a copy! aX

This article was originally published in audioxpress, February 2019.

About Geoff Hill
Geoff Hill has worked with many major and minor companies, from ‘one man bands’ through to international corporations with 200,000+ employees. Along the way he has designed everything to do with sound, including automotive, mobile phones, PA and hi-fi systems, ranging in price from sub-£10 up to £30,000+ systems. He has designed loudspeaker drivers from 25mm tweeters up to 18in sub-bass drivers, using programs and techniques that include FEA, FEMM, CAD, AutoCAD and SolidWworks.

An active member of the Audio Engineering Society, he has worked with various committees over the years to help and assist where and when he can. He is currently active within AES SC-04-03 on the subject of loudspeaker measurements, and is a British member of IEC TC100. Geoff has a consultancy in the UK working with a broad range of companies in the UK, Europe and Asia, working mainly in the hi-fi and consumer audio electronics arenas. He has a particular and long-standing interest in high-efficiency loudspeakers and single ended amplification that was triggered when he once fixed a Pye Mozart valve amplifier, which is still one of the sweetest amplifiers he has ever listened to. Another long-standing interest is in improving loudspeaker measurements and the application of modeling to practical speaker design. Geoff can be contacted at www.geoff-hill.com or through his business www.hillacoustics.com.
related items