In the August 2015 edition of Voice Coil, Mike Klasco provided an industry update on the industry trends regarding voice coils. He starts with a look at the business side of speaker manufacturing and discusses new voice coil, collars and wire materials. The article also provides an insightful look-ahead on this critical part of speaker design.
Let’s start with the business side of voice coils. Most North American speaker manufacturing has moved to the Far East, creating an attrition of domestic speaker parts suppliers. Long-established big and small voice coil winders—including Acousta-Coil, Krenz, Precision Coil, AV Coils, and Meisei—no longer exist.

In discussing “the state of voice coils,” I thought who better to talk to than Jon Van Rhee of Precision Econowind. As the last voice coil winder in the US, Precision Econowind was astute enough to partner with Po Yun for tonnage automotive OEM coils while keeping the high-performance flat wire coils in-house.

Rhee states, “We are constantly finding ways to make the coils handle more power, but these are only babysteps. There is one guy in China who claims his coils will handle 9,000 W, but that has proven to be untrue, so that claim will soon go away. We were crazy busy in 2014 until November/December, and then everything dried up. We could not even get people to speculate on what they may need for January/February. Then after CES, someone flipped a switch and we have been swamped ever since. We are so busy now that we are working six days a week and quoting seven to eight week lead times. We now have 50 people making coils and we could use at least five more at the moment.”

Rhee explains, “Most of our work is still automotive aftermarket, pro sound, and high-end home theater. We use some copper wire, but most is aluminum now (see Photo 1). We steer clear of CCA [copper-clad aluminum] whenever possible. Kapton (see Photo 2) and Nomex (see Photo 3) are in good supply, for now, so that makes life easier.”

During the last five years, the Asian coil winding industry was turned upside down due to the shrinking autosound aftermarket, home theater, and whole-house audio markets, and the automotive OEM autosound business. Also, when copper prices kept rising, the strongest companies bought huge inventories of wire only to have the price drop back down. In preparing the directory of voice coil winders some of the listings include established firms hanging on by their fingertips. However, there are a lot of new businesses in the China voice coil industry and at least some of the well established companies are still strong.

New Voice Coil Materials
Bobbins — Morel introduced a range of high power speakers with titanium voice coil bobbins (see Photo 4). Titanium is appealing when compared to aluminum because there are less eddy currents and half the thermal expansion. While titanium is 60% heavier than aluminum, it is also much stronger. Titanium enables manufacturers to use a thinner gauge titanium bobbin and still have greater strength and a lighter bobbin than with aluminum.

I should also mention that SKC from Korea has joined the thermoset polyimide film game. The Chinese polyimides are unbeatable in price but they are thermoplastics and lack the high-temperature integrity of the polyimide thermosets that are ideal for highperformance voice coils.

Collars — The supply of meta-aramid spun lace Nomex for collars has been inconsistent, but now seems stable. Teijin offers its Conex meta aramids and a few Chinese vendors (e.g., Metastar and X-Fiper) have joined the supply chain. IPT 3M is known for its Tufquin, but now has higher temperature materials useful for collars such as Cequin 1 and 3000 and Thermavolt inorganic papers.

Looking Ahead
Still in stealth mode are super high-power polyimide enamel insulation coating, adhesives, and related special winding processes for the magnet wire (voice coil wire), which has been the “Achilles heel” for high-temperature operation of voice coils.

Another refinement is a new alloy for voice coil wire conductors. Until now, there have been only a couple of options—copper, aluminum, and copperclad aluminum. Because of its superior conductivity, annealed copper is the international standard to which all other electrical conductors are compared. Yet, the copper alloy typically used can be tweaked to lower the temperature coefficient of resistance (TCR). The temperature dependence of electrical resistance and of the Thiele-Small (T-S) parameters has to be taken into account when considering implications for power compression to voice coil outside diameter when the coil is running hot. The temperature dependence of copper and aluminum conductors is significant when used in smartphone microspeakers or ringtones, speakerphone operation, or concert speakers.

Pure copper in its International Annealed Copper Standard (IACS) as 100% IACS = 58 MS/m at 20 °C, decreasing by 0.393%/°C. Aluminum has 61% of the conductivity of copper. An aluminum conductor’s cross-sectional area must be 56% larger than copper for the same current carrying capability. The need to increase the thickness of aluminum wire is a consideration in its use in tight voice coil gaps—especially as it expands more than copper voice coils when hot.

So, this wonder wire is lighter than copper, has a current-carrying capacity several orders of magnitude higher than copper, and behaves more linearly at high power. Count on Voice Coil to be the first place where you will read about these innovative products when they are introduced. Finally, let me end with these words of wisdom from Jon Van Rhee of Precision Econowind; “It seems silly, but with all the technology in the world, we are still trying to wind wire around a circular former without any hiccups.”

This article was originally published in Voice Coil, August 2015. 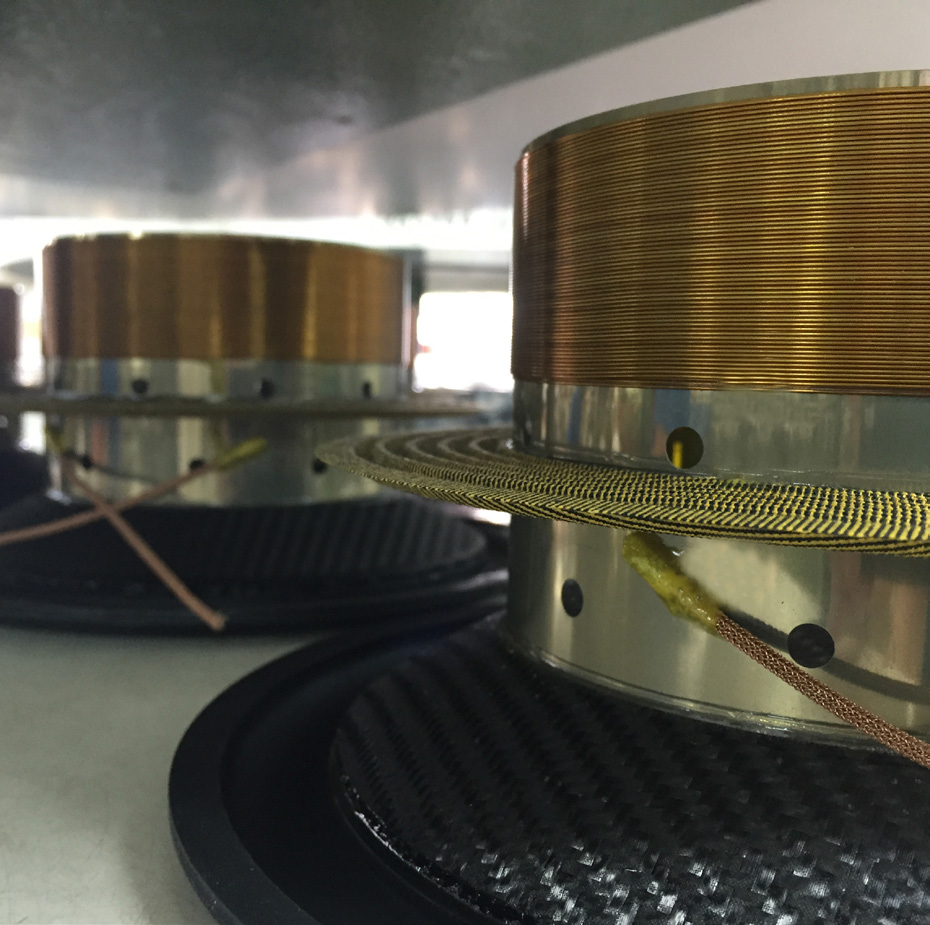