November 2016 marks the beginning of Voice Coil’s 30th year and this issue celebrates it accordingly! The November 2016 issue is filled with great articles including a Spotlight by Mike Klasco on MEMS Microphones, and an extensive directory of Mic Capsule Vendors. In this month’s Acoustic Patents, James Croft reviews two different patents, which apparently should have been scrutinized by industry experts - and weren’t. While this month’s Test Bench features new drivers from two of the premier Italian Pro Sound OEM manufacturers, Faital Pro and B&C Speakers. 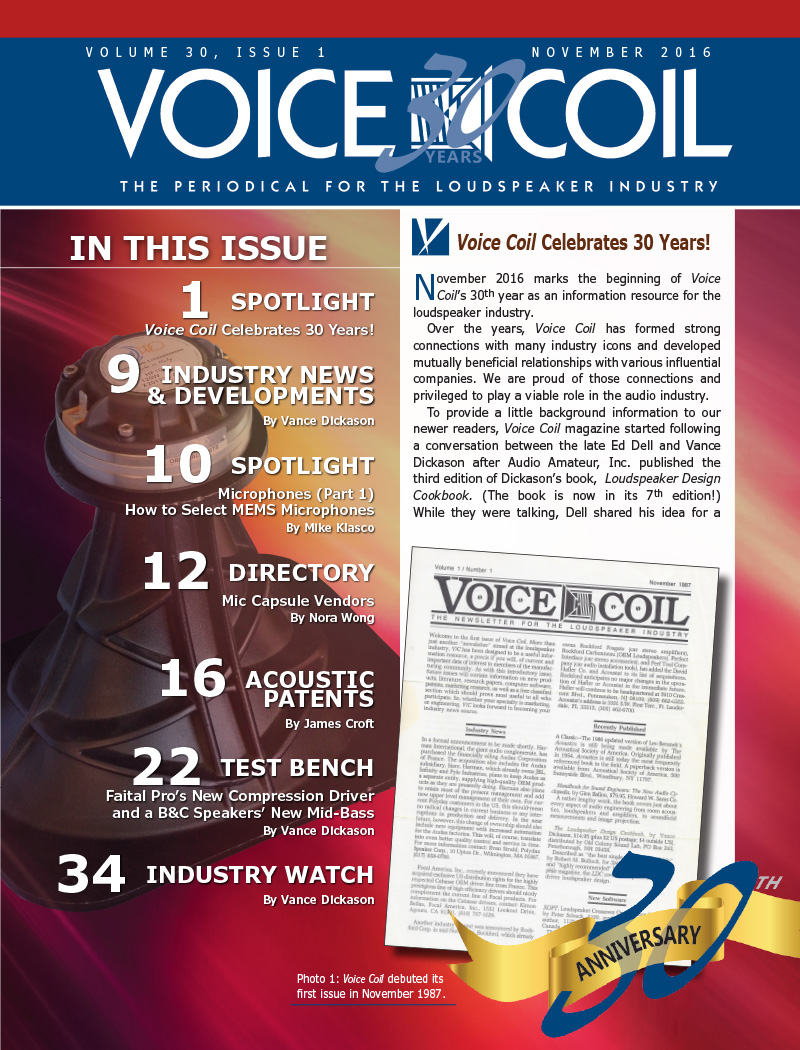 November 2016 marks the beginning of Voice Coil’s 30th year as an information resource for the loudspeaker industry. In this month’s issue, we revisit the magazine's beginnings and how, over the years, Voice Coil has formed strong connections with many industry icons and developed mutually beneficial relationships with various influential companies.

Voice Coil magazine started following a conversation between the late Ed Dell and Vance Dickason after Audio Amateur, Inc. published the third edition of Dickason’s book, Loudspeaker Design Cookbook. (The book, now published by Segment LLC, is in its 7th edition!) While they were talking, Dell shared his idea for a publication that would become an information “super highway” for the loudspeaker industry. Needless to say, Dickason considered it not only an outstanding idea for a new publication, but something he felt the industry badly needed and would happily support. Obviously, after this many years, they were both right about moving forward with the publication. Dell came up with the name, Voice Coil, and as they say, the rest is history.

Voice Coil debuted its first issue in November 1987 and, until February 1992, it was a monthly subscription-based black-and-white four-page newsletter that Vance Dickason wrote with no other contributors and no advertising. In June 1995, it started to have a cover and gradually incorporated contributions from industry consultants such as Richard Honeycutt, Mike Klasco (Menlo Scientific), and James Croft (Croft Acoustical), all of which share their memories of the publication’s early days.

In this issue, Dickason also shares some thoughts on the future for Voice Coil and the audio industry. On behalf of Vance Dickason, Editor; KC Prescott, President; Shannon Becker, Editorial Coordinator; João Martins, International Editor; and the staff who make this publication possible, we would like to thank all our readers and advertisers for their continued enthusiasm and support.

And, on this month’s Voice Coil Spotlight, Mike Klasco (Menlo Scientific) updates essential information on MEMS Microphones and explains the differences and how to select solutions among the latest designs. As Klasco explains, “Today most audio products, from Bluetooth speakers to appliances with voice command, now contain at least one microphone. If the product was designed a couple of years ago, it had an electret condenser microphone (ECM), but today it will most likely use a MicroElectrical-Mechanical System (MEMS) microphone.” This issue also includes an extensive directory of Mic Capsule Vendors compiled by Nora Wong, (Menlo Scientific.)

In this month’s Acoustic Patents, James Croft reviews two disturbing patents - for completely different reasons. The first is one of those patents that is hard to understand how it could possible materialize, while the second is another case of a concept ignoring abundant prior art, which apparently wasn’t scrutinized by industry experts - as it should.

The first patent describes a “System and Method for Improved Audio Perception” and was recently granted to Yair Raz (inventor) on behalf of Innovo IP, LLC (Aventura, FL). As stated, the “invention” describes “methods of Audio Signal Personalized Enhancement for optimal listening to music. A combination of hearing test, audio signal compensation, and signal processing algorithms are implemented jointly in an audio Device. An audio signal is processed and tuned within the entire range of audible frequencies to actively compensate for both the characteristics of the listening device, and the specific hearing characteristics of the listener, resulting in a much improved music listening experience. A randomized self-test algorithm is used to analyze user’s hearing ability in each ear within a preselected dynamic volume range at multiple frequencies spanning the audible spectrum.”

As you can see, the description could easily be applied to dozens of currently available products and a very familiar concept. As Croft comments, “Since a review of the patent is not the same as a review of the product, it will be interesting to hear how well a fully matured version of this type of system can be made to perform.”

The second patent in this month’s issue is a “Dynamic Acoustic Waveguide,” awarded to William Eugene Wheeler (High Ridge, MO) as inventor and assignee, and it describes a “loudspeaker and a method of operation that allow for the production and emphasis of extremely low bass tones. The loudspeaker generally is formed from a loudspeaker driver cone of conventional type which is placed in a very small enclosure with two waveguides attached thereto. A smaller balance waveguide is positioned forward of the face of the cone and a larger tuning waveguide is positioned to the side of the cone. The cross-sectional area of the aperture connections of both waveguides to the enclosure are small compared to the cross-sectional area of the loudspeaker driver cone.”

As Croft notes, this is a similar idea to patents P. G. A. H. Voigt’s British patent number 447,749 from 1935, L. H. Mitchell’s US 3,393,766 patent (1966) and Amar Bose’s US Patent 4,628,528 (1982), which popularized and trademarked it as the Bose Acoustic Wave Music System. It's also true that Bose’s patent did not cite either of the earlier inventors’ patents. In this patent under review, William Wheeler re-invents this classic architecture…

Finally, this month’s Test Bench features two new drivers from two of the premier Italian Pro Sound OEM manufacturers, Faital Pro and B&C Speakers. From Faital Pro, Dickason reviews the HF108R compression driver with the corresponding LTH102 horn and, from B&C Speakers, he reviews a new woofer in the MBX series of mid-bass woofers, the 8MBX51. 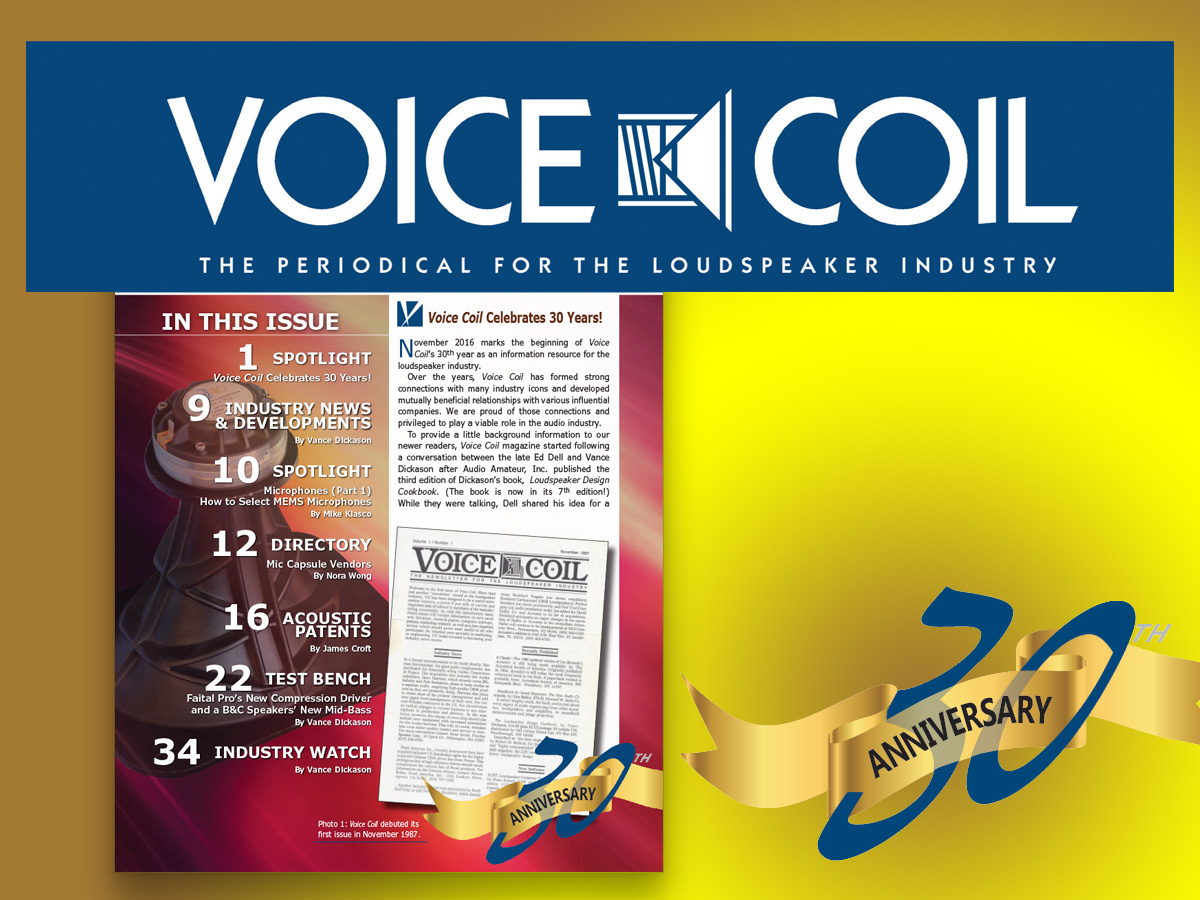 All great reasons to hurry up and download the November 2016 issue now!

This latest issue of Voice Coil - as well as previous archived editions - is available to read online or download here: www.gotomyvcoil.com

To download the new issue, renew your subscription, or qualify for a free subscription to Voice Coil, just go here: audioxpress.com/page/Voice-Coil-Subscriber-Services.html
related items