Double Down: Voice Coil Focuses on Voice Coils for August 2018 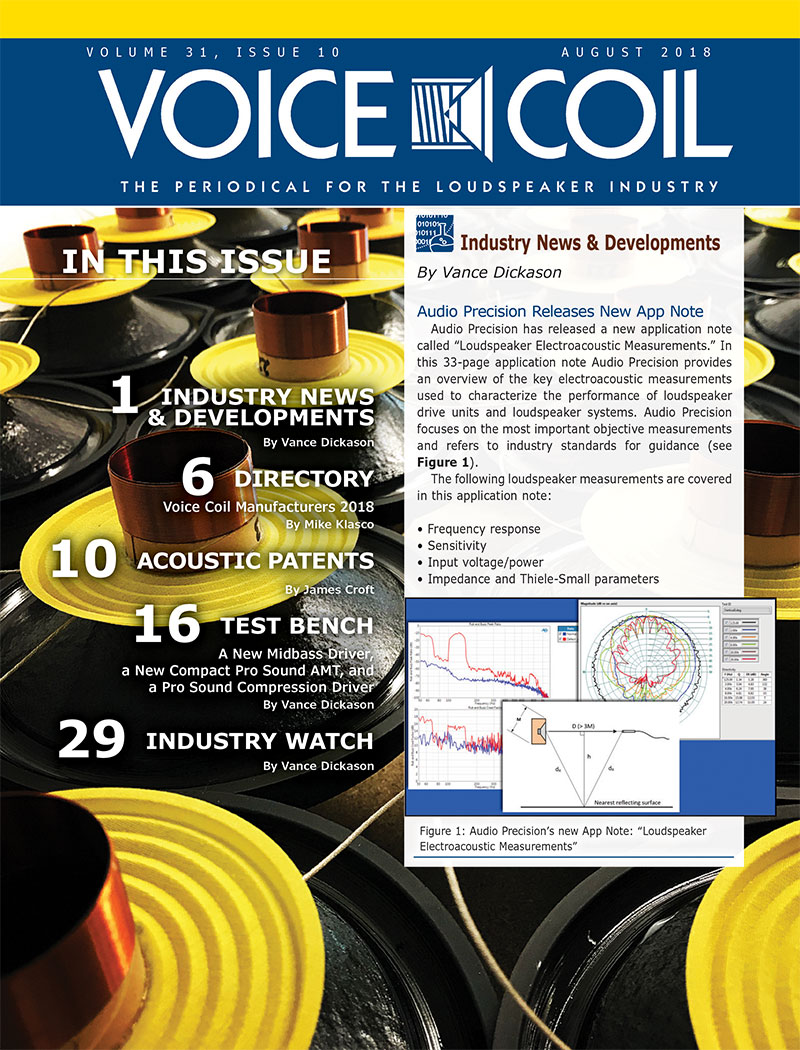 For August 2018, following our usual highlights on the latest Industry News & Developments, Voice Coil features an updated directory on Voice Coil manufacturers, compiled by Mike Klasco (Menlo Scientific, Ltd.), covering suppliers in the US, Europe, and Asia. As Klasco writes, while most of the North American speaker manufacturing has moved to the Far East, creating an attrition of domestic speaker parts suppliers and more specifically voice coil winders, now the Asian coil winding industry is also suffering due to the shrinking autosound aftermarket, home theater, and whole house audio markets, causing the market to consolidate. Because of that, this updated directory of voice coil manufacturers that have continued to thrive is more important than ever for the industry.

Next up, Voice Coil August 2018 serves a double dose of Acoustic Patent reviews. James Croft combined the review of two important independent patents, having in common the fact that they try to address the shortcomings of the work of Dr. Oskar Heil with his Air Motion Transformer (AMT) woofer system, the follow-up project for his famous AMT planar magnetic transducer tweeter and subsequent efforts to make it into a usable product.

Subsequently, Croft reviews another recent related patent, for an Air Motion Transformer Passive Radiator, invented by and awarded to Eugene Julius Christensen (Aspen, CO), described as an improved passive radiator device that utilizes a stacked construction in which there exist two or more generally parallel and separate movable diaphragm sections, in which the relative motion of adjacent diaphragm sections will either move toward each other, or away from each other, as air pressure or sound waves emanating from the interior of a loudspeaker cabinet impinges upon the interior air openings.

While the first patent explication describes a stacked, multi-parallel-diaphragm woofer system that was based on low-frequency versions of the original AMT work of Oskar Heil in the 1970s, the second by Eugene Christensen, has also been inspired by Heil’s work, in that he has two earlier patents on a rather elegant, omni-directional version of the AMT, which he originally disclosed in US Patent 9,124,964, “Wide-range, wide-angle loudspeaker driver” and later in a continuation of the same application, US Patent 9,900696, of the same name. In the current patent application, Christensen has revisited his interest in the AMT concept—this time configured as a novel, passive radiator architecture.

And from a double dose of patent reviews, this edition of Voice Coil triples-down on the regular Test Bench by Vance Dickason. In this edition, Dickason characterizes the New Eminence Alpha-5-8 5” line array/column array midbass driver; the TPL75, a new compact Pro Sound AMT from Acustica Beyma; and the DE780TN, a recently released 1.4” exit titanium diaphragm pro sound compression driver from B&C Speakers. 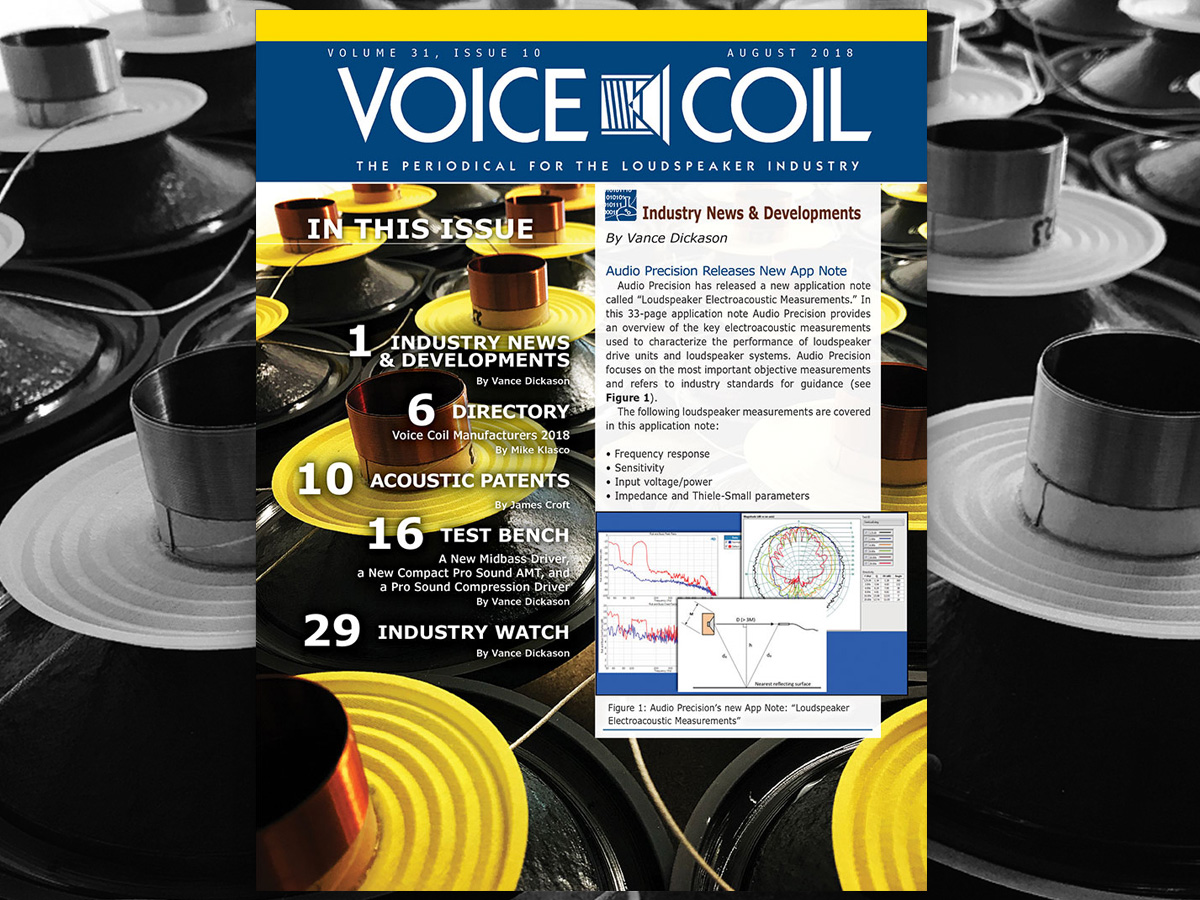 In Industry Watch, Dickason details the latest activities of the Association of Loudspeaker Manufacturing and Acoustics (ALMA) International, why the Consumer Technology Association (CTA) is taking a stand on some important current Administration policies, which have cause the CTA to respond with important statements.

Voice Coil August 2018 is now available for download and on the mail for print subscribers. Subscribers can just go to - www.gotomyvcoil.com - to download this issue.

Remember, Voice Coil is available in print and download for all registered subscribers, free for industry professionals. To qualify for a free subscription to Voice Coil, or renew your subscription, go to: audioxpress.com/page/Voice-Coil-Subscriber-Services.html
related items

Here for You: Voice Coil May 2020 is Now Available

audioXpress Opens Up During Lockdown! Free Access to Digital Editions