The August 2015 edition of Voice Coil features an important industry update on what’s new in voice coils, prepared by Mike Klasco, including the latest directory of voice coil manufacturers. In Acoustic Patents we discuss a new “Desktop Audio Monitor System and Method” and this month’s Test Bench features two 12” drivers from B&C Speakers and Prescient Audio. 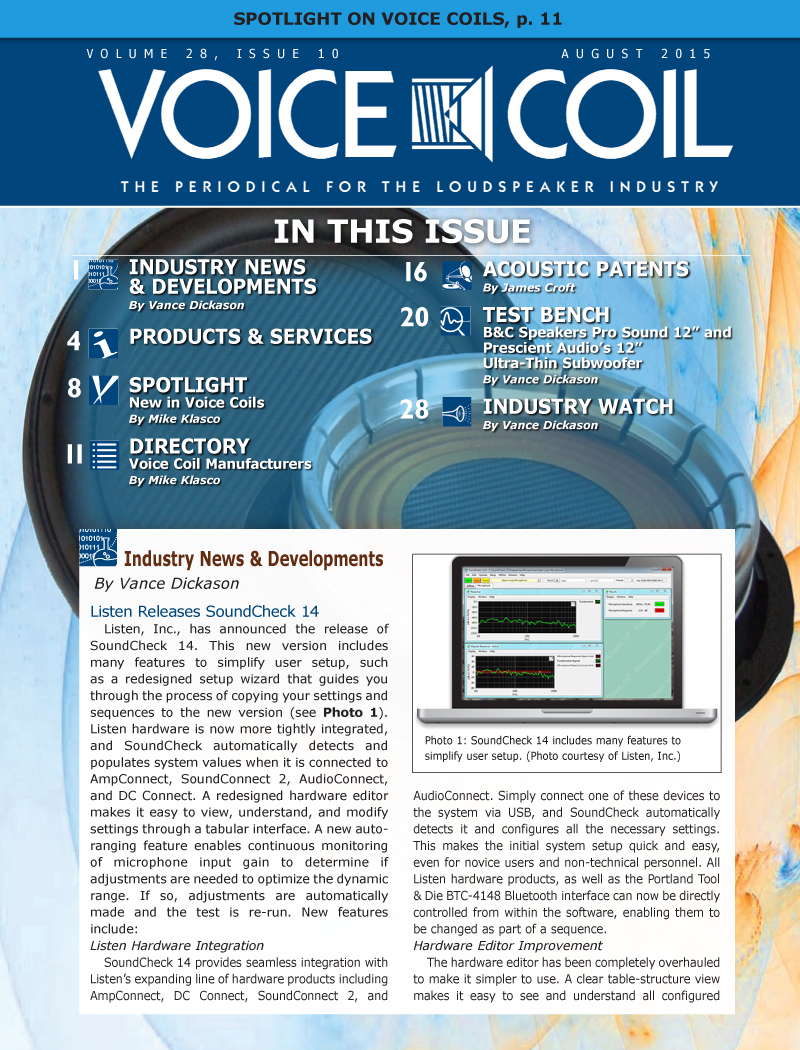 The August 2015 edition of Voice Coil is ready for download. As usual, this issue starts with Industry News & Developments by Vance Dickason.
This month, Dickason highlights the fact that Listen, Inc., has announced the release of SoundCheck 14, the first version of the software available for use on Mac OS X. Mac users with Mavericks or Yosemite versions of OS X are now able to run SoundCheck as a native 64-bit application. Sequences, steps, and data files are cross compatible between the Windows and Mac versions, providing versatility when collaborating with other SoundCheck users. Core audio driver support is included, enabling the same hardware to be used on both operating systems.

As Vance explains, this new version includes many features to simplify user setup, such as a redesigned setup wizard that guides you through the process of copying your settings and sequences to the new version. Listen hardware is also now more tightly integrated, and SoundCheck automatically detects and populates system values when it is connected to the AmpConnect, SoundConnect 2, AudioConnect, and DC Connect interfaces. A redesigned hardware editor makes it easy to view, understand, and modify settings through a tabular interface. A new auto-ranging feature enables continuous monitoring of microphone input gain to determine if adjustments are needed to optimize the dynamic range. If so, adjustments are automatically made and the test is re-run. Read all the other details in this issue.

In this month’s Spotlight, Mike Klasco (Menlo Scientific) wrote another important industry update on what’s new in voice coils. As Klasco explains, on the business side of voice coils, more North American speaker manufacturing has moved to the Far East, creating an attrition of domestic speaker parts suppliers and that’s the reason why his article starts with by discussing “the state of voice coils,” with Jon Van Rhee of Precision Econowind, one of the last voice coil winders in the US.
This article is another important update on all the trends, the materials, and the innovations happening in a vital loudspeaker component. And of course, in the best Voice Coil (the publication) tradition, Klasco assembled and introduces the latest directory of voice coil manufacturers.

In the monthly Acoustic Patents column, James Croft (Croft Acoustical) looks at one of the most interesting concepts for a “Desktop Audio Monitor System and Method”, US Patent 9,036,837, recently granted to James Tuomy (Framingham, MA), Barry Michael Kosherick (Hudson, MA), Laurie Wilk (Framingham, MA), and J. Richard Aylward (Ashland, MA). If the names don’t ring a bell, maybe the name Phasx Technologies will tell you something more. And maybe you would like also to read this.
The new patent, filed in 2010 was deservedly granted to this desktop audio loudspeaker system with an innovative radiating solution to reduce multipath effects caused by reflection of sound by the desktop.

In this month’s Test Bench, Dickason reanalyzes B&C Speakers’ 12” 12NDL88 professional audio driver and looks in-depth at Prescient Audio’s 12” Ultra-Thin subwoofer, the TD-12.
The reason why B&C Speakers’ 12NDL88 is revisited - since it was tested in Voice Coil’s March 2015 issue - has to do with the fact that the previously published Klippel data was from a different woofer. Apparently, a .kmdx file was saved under the B&C 12NDL88 file name and the correct Klippel data published in this issue is actually much better.

Regarding the TD-12, this is a new 12” subwoofer from Prescient Audio, a company founded in 2011 by Paul Niedermann, chief engineer and CEO, and Karl Schmitt, company COO, which was the talk of the 2014 CES show. Paul Niedermann set out to create a new driver in 2008 and the initial prototype of the ThinDriver was introduced in 2010. Following three years of development and refinement the ThinDriver technology was launched in 2014 and Niedermann’s TD-12, with a mounted depth of 2.25”, was named as an International CES Innovations 2014 Design and Engineering Awards Honoree for being the thinnest and lightest 12-inch subwoofer available. Vance Dickason puts it to the test to see how it measures.

All this and the usual Industry Watch section are great reasons not to delay on downloading the issue, renew your subscription, or qualify for a free subscription to Voice Coil. Just go here.
As always, Voice Coil is available online here: www.gotomyvcoil.com
related items