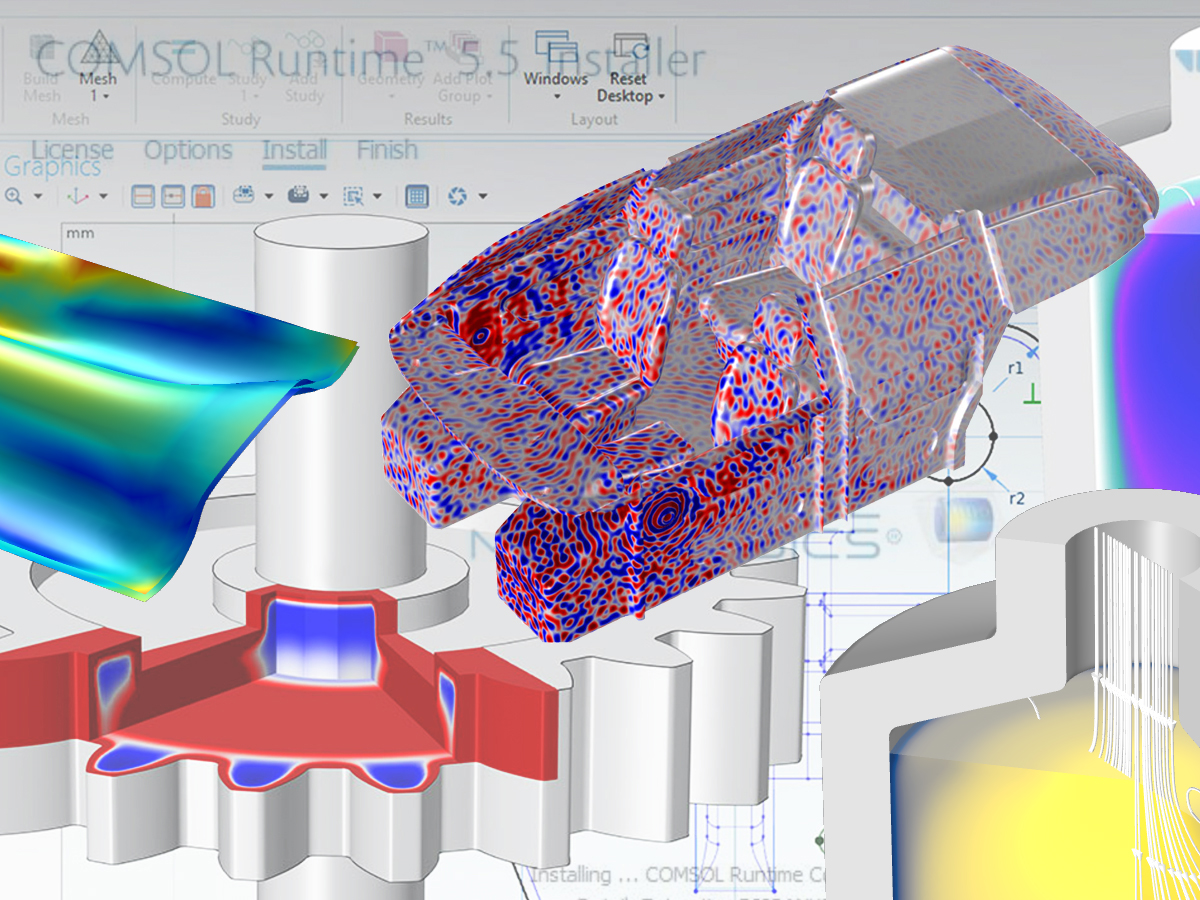 In addition to changes to the GUI to streamline physics selection, there are also enhancements to existing solvers, speeding up a wide range of simulations. Other notable improvements module include a new Elastic Waves, Time Explicit physics interface, advanced modeling techniques for the analysis of ports in microacoustic applications using both transfer and scattering matrices, as well as pipe acoustics multiphysics coupling.

From the acoustician’s point of view, what is particularly notable in this release is the breadth of scale in the new 5.5 features. This provides improved capability when modeling the smallest microspeakers and MEMS microphones (port boundary conditions), while the Elastic waves updates provide advantages when modeling the acoustically large domains for concert venues or car cabins.

This is quite analogous to the power that COMSOL unlocks for loudspeaker analysis. Tools are available that allow a holistic approach, allowing a complete design to be modeled from transducer to complete audio system to large acoustical space for far field evaluation. Electroacoustic designs can be analyzed using lumped element, fully-coupled, or lumped element and fully-coupled methods.
Powerful Parametric Sketching with Dimensions
The Design Module provides a new sketching tool that makes it easy to assign dimensions and constraints to planar drawings for 2D models and 3D work planes. "We have carefully integrated the new dimensions and constraints tool in the Model Builder so that it becomes a natural part of the COMSOL Multiphysics workflow," says Daniel Bertilsson, technology manager for mathematics and computer science at COMSOL. "The new tools for dimensions and constraints can be used together with model parameters in COMSOL Multiphysics to drive the simulation, whether for a single run, parametric sweep, or parametric optimization."

The method also has low-frequency applications, such as in seismology. The included multiphysics capabilities can seamlessly combine linear elastic wave propagation in a solid and its transition to a fluid as an acoustic pressure wave, and back again. The new elastic wave functionality is available for users of the Structural Mechanics Module, MEMS Module, and Acoustics Module. The fluid-structure acoustics coupling is available in the Acoustics Module.
For frequency-domain simulations, a specialized solver for wave propagation analysis makes it possible to handle higher frequencies (shorter wavelengths) using the finite element method. The new solver can be used to analyze enclosed structures such as that of a car cabin interior as well as other acoustics simulations.

"The module can be combined with any of the other COMSOL products for virtually any kind of multiphysics analysis that includes metal phase change. We envision users combining this with, for example, the Heat Transfer Module for the influence of heat radiation, the AC/DC Module for induction hardening, and the Nonlinear Structural Materials Module for highly predictive analysis of material behavior."

A new smoothing operation for topology optimization ensures higher-quality geometry outputs that can be used for additional analysis and additive manufacturing. COMSOL Multiphysics now has general support for import and export of the additive manufacturing formats PLY and 3MF, in addition to the STL format that is already available.

Nonlinear Shell Analysis, Pipe Mechanics, and Random Vibration Analysis
A wide range of nonlinear analysis options are now available for shells and composite shells, including plasticity, creep, viscoplasticity, viscoelasticity, hyperelasticity, and mechanical contact. The mechanical contact modeling functionality has been extended to support any combination of solids and shells, including solid-shell, solid-composite shell, and membrane-shell. Depending on the type of analysis, these improvements will be available to users of the Structural Mechanics Module, Nonlinear Structural Materials Module, and Composite Materials Module.

For users of the Structural Mechanics Module, a new user interface for pipe mechanics provides functionality to perform stress analysis of pipe systems. The new functionality can handle a variety of pipe cross sections and can include effects from external loads, internal pressure, axial drag forces, and temperature gradients through the pipe wall.

Users of the Structural Mechanics Module can now perform random vibration analysis to study the response to loads that are represented by their power spectral density (PSD). This allows users to include loads that are random in nature, such as turbulent wind gusts or road-induced vibrations on a vehicle. The loads can be fully correlated, uncorrelated, or have a specific user-given correlation.

The Multibody Dynamics Module provides new functionality for analyzing rigid and elastic chain drives with automatic generation of the large number of links and joints needed for modeling chain drives.

Multiscale Wave and Ray Optics, Piezoelectric Shells, and PCB Ports
The Ray Optics Module can now be combined with the RF Module or Wave Optics Module for simultaneous full-wave and ray tracing simulations. This enables multiscale modeling, such as analyzing a waveguide beaming into a large room, where using a full-wave simulation would be computationally prohibitive. Combining the AC/DC Module and the Composite Materials Module, users can now analyze layered materials with both dielectric and piezoelectric layers in thin structures. In the RF Module, a set of new ports for vias and transmission lines makes setup much quicker and gives more control to the user for modeling of printed circuit boards.

"Since the release of COMSOL Compiler last fall, we have seen great response from our Application Builder users with this new possibility of distributing their applications in standalone form," adds Daniel Ericsson, application product manager at COMSOL.

The latest version of COMSOL Compiler has a new compile option for generating minimum-sized files for easier distribution. When the user launches an application for the first time, where the new compile option has been used, COMSOL Runtime is downloaded and installed, if needed, from COMSOL's website. Only one instance of COMSOL Runtime is needed for applications using the same COMSOL version. COMSOL Runtime has a size of about 350 MB and an application file can be as small as a few MB.
www.comsol.com/release/5.5
related items