The Return of the Legendary Dynaco ST70 Tube Amplifier 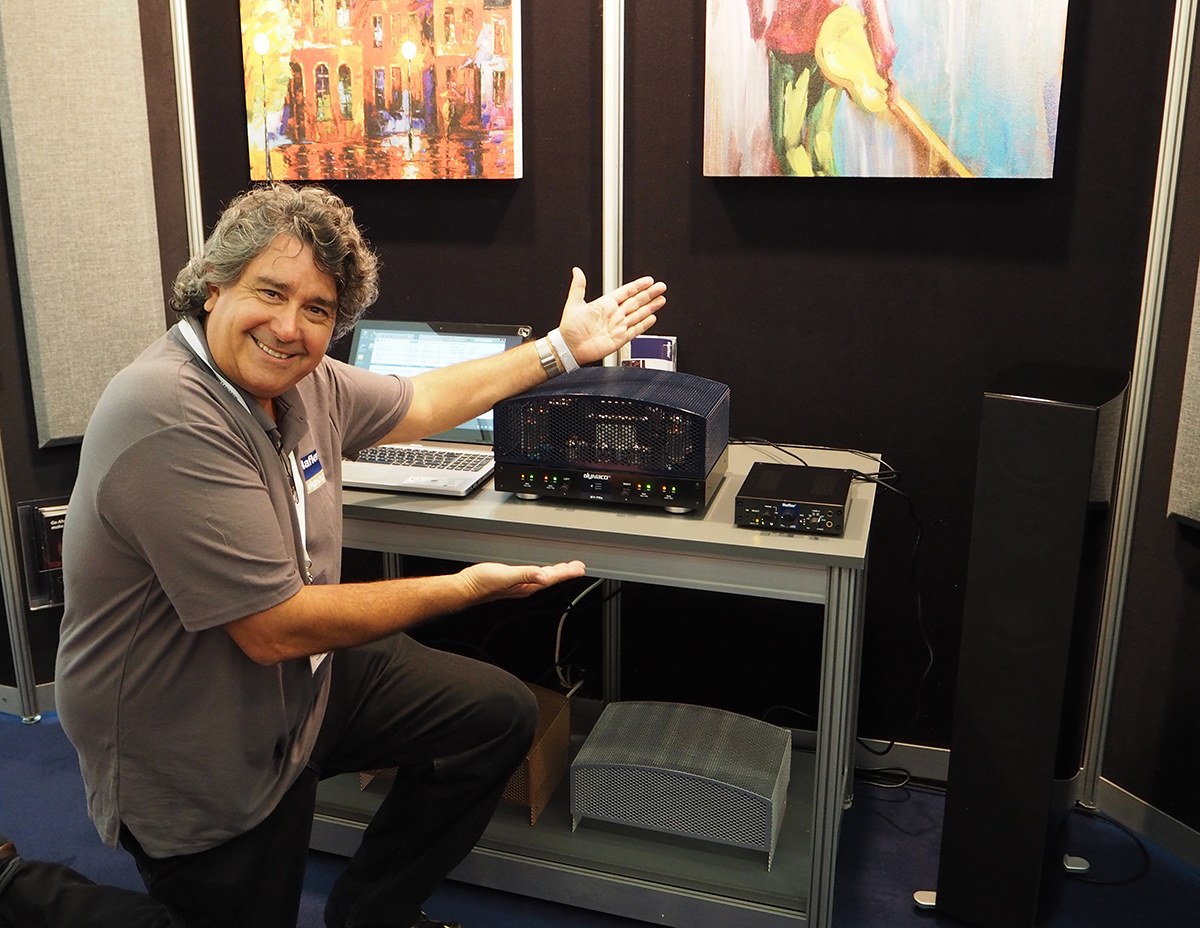 As previously announced, 60 years later, legacy brands Hafler and Dynaco, two of the most prestigious brands of all-time, have come together under the umbrella of Radial Engineering Ltd, Hafler’s former Canadian distributor - turned manufacturer. Since acquiring the brands in earlier 2014, Radial Engineering has been working on new Hafler designs and now introduced the first Dynaco products at the 2016 High-End show in Munich, Germany. Peter Janis, Radial President and now the owner of Hafler and Dynaco brands, was overjoyed to show the brand-new Dynaco ST-70x prototype, using also the opportunity to appoint new distributors for the brand and the new specific market segment.

The results out of Munich seem to be encouraging, and Peter Janis confirmed they are getting ready to start production (Proudly Made in North America), after they fine tune the last details - such as the multiple color options for the top protection cage - with first deliveries anticipated to begin in July 2016. Meanwhile, the company disclosed additional details about the reborn ST70, of which there are still thousands of the original tube amplifiers still in use around the world.

As Dynaco Senior Engineer Dan Fraser explains: “The original Dynaco Stereo 70 is a true classic that is still regarded with awe by audio enthusiasts worldwide. The ST70 Series 3 marks the introduction of a third generation of vacuum tube products bearing the Dynaco name. This “new 70” reflects the illustrious history of Dynaco’s involvement with vacuum tube designs as well as the latest advances in vacuum tube technology. We like to think of the Series 3 as the update that David Hafler would have made if he were alive today.”

“Through its long history, the Stereo 70 has proven to be a robust, reliable design of exceptional value. We have sought to preserve the considerable virtues of the original 70 while making fullest use of much better and more modern parts, plus advanced circuit design techniques. When comparing “old 70” with “new 70,” one cannot help but notice the external similarity (i.e., the metalwork is of similar dimensions but with an entirely new connector array and top cover). Internally, however, the two units differ radically from each other in both general appearance and execution of design.”

The low open-loop gain of the original 70 is maintained, thereby minimizing Transient Intermodulation Distortion (TIM). The Pentode-Triode gain circuitry is virtually the same as the original, thus keeping the signal path as short as practical without unnecessary distortion inducing complexity. The output tubes remain the fine EL34/6CA7.

David Hafler’s original output transformer designs have been retained yet updated with the latest knowledge in the art of winding output transformers. This not only serves to improve the transient response, it also allows both 4 Ohm and 8 Ohm operation using a simple selector switch. 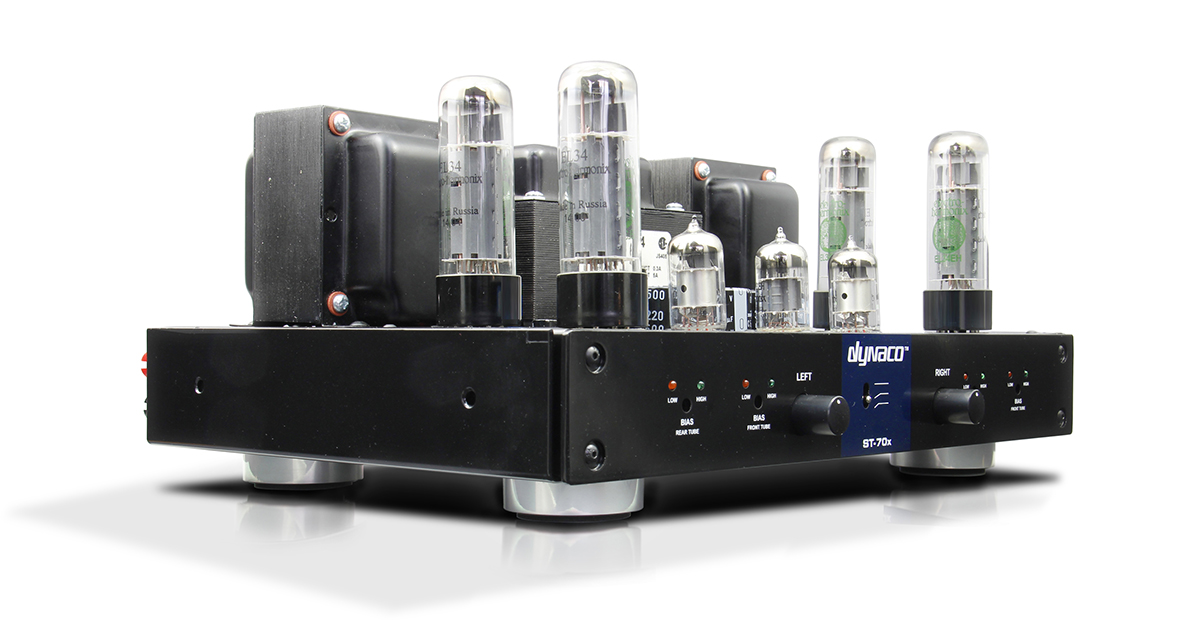 Dynaco has made extensive use of the most modern parts in the ST70 Series 3, selecting precision metal-film resistors, poly-composition capacitors and miniaturized high-capacity power supply electrolytics (unavailable at the time of the original design). Newer parts are also more conservatively rated than some of the original parts. In compliance with general practices, a heavy-duty three-pin detachable grounded power cord is provided. Signal ground is the same as electrical ground and chassis. All signal connectors are gold-plated. The speaker connections are no-touch binding posts compliant with modern safety standards.

The original ST70’s power supply has long been the design area most vulnerable to legitimate criticism. Dynaco has addressed this problem with the use of an entirely new and larger dual primary power transformer with improved line regulation (due to added iron in its core). It can now be wired for 220 volt / 50 Hz operation. The original 5AR4 tube has been replaced by Solid-State rectifiers, thus removing the 5AR4’s inherent losses and reduced regulation, while eliminating a failure-prone out-of-production tube in the process.

The original power supply filter capacitance has been made far larger. As large as it could be fitted in the same form factor. This has been desirable for a long time but has only recently become practical (i.e., much greater capacitance can now be packaged in casings of the same.) The troublesome selenium rectifier used in the bias circuitry has also been replaced by a Solid-State rectifier with additional supply capacitance.

The filter inductor has been reduced in value to complement the increase in filter capacitance with a resulting reduction of DC resistance. This provides more voltage for use by the outputs and somewhat higher peak power output.

All of the above changes serve to improve “stiffness” of the power supply by lowering the effective power supply impedance and improving regulation while increasing available voltage for maximum safe power output. This makes for a tighter bottom end.

Extensive testing and analysis has revealed that roll-offs may not be the most appropriate form of response limiting and Dynaco has installed an input frequency limiting filter network to limit bandwidth to 20 to 20,000 Hz (long regarded as the human hearing range). This filter allows the removal of the tailoring components within the active circuitry and permits the active gain circuitry to be flatter across the frequency spectrum. The audible benefit is a great improvement in distortion components at the frequency extremes while still maintaining adequate bandwidth.

This network requires the drive impedance from the preamplifier to be less than 2K Ohms for proper top end response. Even tube types frequently achieve less than 2K using cathode follower output drivers. This also minimizes the effect of cable capacitance between the preamplifier and the power amp. This is acceptable for most modern day preamplifiers though many older pre-amps such as the Dynaco PAS-3X may have some matching issues. It is possible to change the input filter capacitors to permit higher impedance drives if absolutely necessary.

As well, due to the extended low frequency response, the improved power supplies, and the inherently lower damping factor tube amplifiers provide, operation with acoustic suspension speakers may result in an exaggerated low frequency response. Hence a high-pass, 3-position filter switch is provided. With bypass and two different frequencies of gentle 6dB per octave roll off. 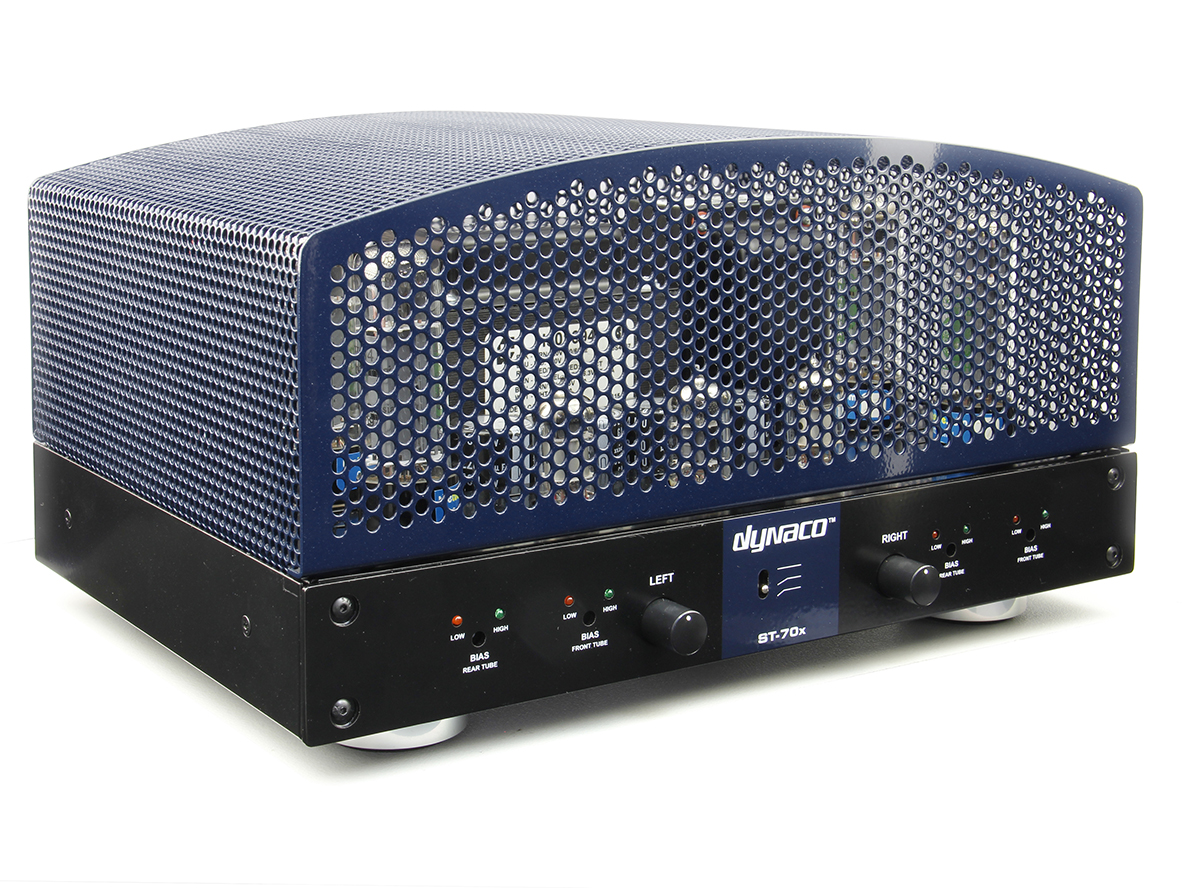 A further improvement in distortion, particularly in the higher frequencies, was achieved by moving the feedback point from the 16 Ohm tap of the output transformer to the actual loaded tap by the impedance selector switch. The switch uses one side to direct the 4 or 8 Ohm tap to the output terminals. The other side directs the feedback point to the tap selected and changes the divider ratio so the gain remains the same whichever tap is selected. Transient response is improved.

The original ST70’s signal tube [7199] is out of production and unavailable, as are all triode-pentode types - except for new old stock (NOS). However companies cannot do new volume manufacturing depending on NOS parts. Instead, the ST70 Series 3 uses a pair of EF86 Pentodes for the input and a 12AU7 dual triode to drive the output tubes. This combination has been tested through long experience in the audiophile community.

The printed circuit board material of the original ST70 was exposed economical phenolic which deteriorated with age creating unpredictable electrical changes resulting in sonic differences. The Series 3 unit uses military-grade, double-sided epoxy fiberglass PC material and shields the recessed PCB with a metal cover plate. The board is populated by the finest modern parts. Sensitivity to internal wiring placement is eliminated since wiring to the output tubes is accomplished via the printed circuit panel. In fact, nearly two-thirds of the trouble-prone original point-to-point wiring has been eliminated!

The bias adjustment is now done with indicator LEDs. After a warm-up period and with no signal playing, all that is required is to set a pair of LEDs to equal brightness. To accommodate unequal aging between initially matched pairs of output tubes, separate adjustments are provided for both tubes of each pair.
For more on the Hafler-Dynaco story see here.
www.hafler.com
related items