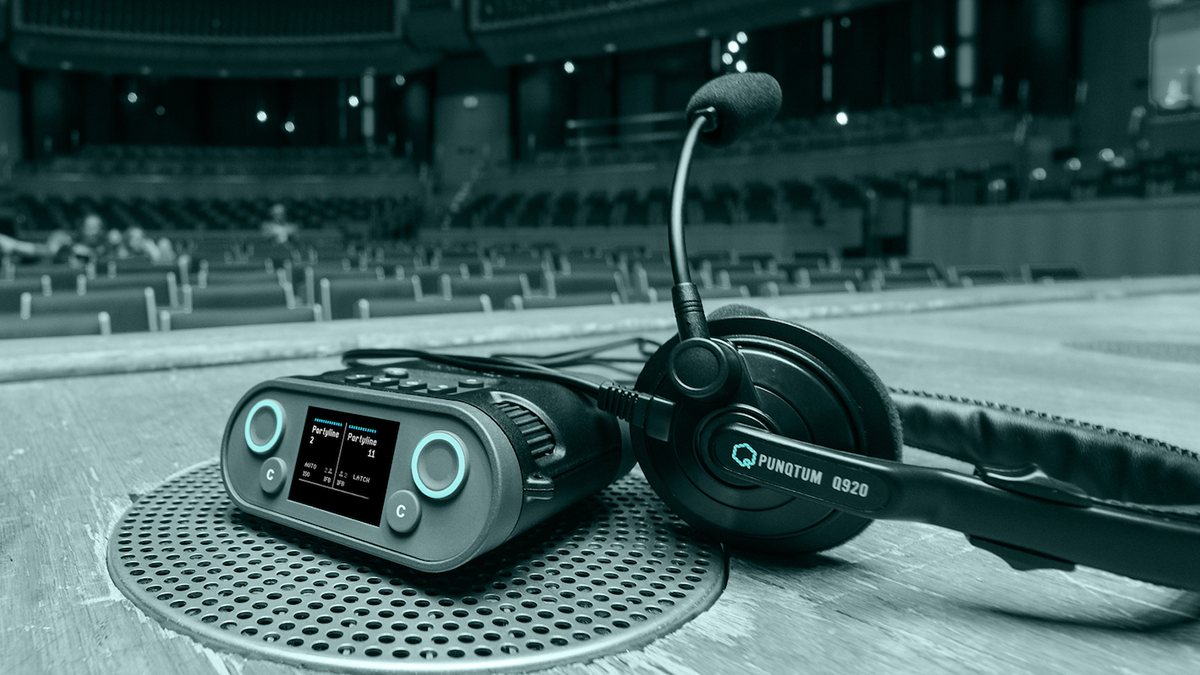 Many audioXpress readers will remember, back in February 2018, the announcement of Riedel Communications acquiring Archwave and Cymatic Audio and creating a new Zurich-base IP engineering hub. Common to those key companies is the name of Arie van den Broek, as Chief Executive Officer and strategic mastermind, where Archwave was one of the leading engineering centers for audio networking, and Cymatic Audio, the creators of an affordable range of multichannel Ethernet audio recorders and interfaces. Cymatic remains an independently operating business unit with its own distribution and sales organization.

Many of the live entertainment and broadcast production companies already rely on Riedel technology for intercom, as well as media distribution and infrastructure. But apart from gaining access to key technology, the Archwave/Cymatic acquisition allowed Riedel to enter new markets and get closer to musicians. At the time, Thomas Riedel, the founder and CEO of Riedel Communications stated: "At Riedel, IP standards are vital not only for our intercom portfolio but also for all of the other Riedel product lines. By collaborating with Archwave, we are taking another important step towards providing complete networking solutions that allow broadcasters to work the way they want to work. With our new engineering team in Switzerland, we now have all the tools we need to create the plug-and-play workflows that our clients need for their transition to IP."

Important to remember also that, back in September 2016, Riedel acquired two very strong intercom-focused companies: ASL Intercom BV, from The Netherlands and DELEC Audio und Videotechnik, from Germany. With those acquisitions, Riedel not expanded its engineering resources considerably, but more importantly gained an important market share in multiple application segments of the highly conservative intercom market, paving the way to an integrated evolution of the technology in the digital/IP age.

Not surprisingly, Riedel did exactly that in 2017, with the introduction of Bolero, an expandable, full-roaming, DECT-based intercom system in the license-free 1.9GHz frequency range, and a game-changing new wireless intercom solution, among other new intercom products. But while the Bolero serves the needs of the big production crews, and offers a direct replacement for the traditional Motorola two-way radios that are still mandatory for many big events, there was a different segment that was still in need of a tailored and more affordable solution.

Enter punQtum
At NAMM 2020, audioXpress had the opportunity to preview a technology that was being develop to fill that gap, precisely the product of Arie van den Broek's team, now under the banner of a completely new company called punQtum.

As a new company separated from the Riedel Communications universe, punQtum promises to combine disruptive technologies with a new, disruptive business model to bring new networked audio tools for audio professionals across a range of applications. And punQtum first release is precisely a digital intercom product based on standard IP network andcAES67 technology for maximum versatility and ease of use. Applications range from live performance to broadcast to houses of worship and more. 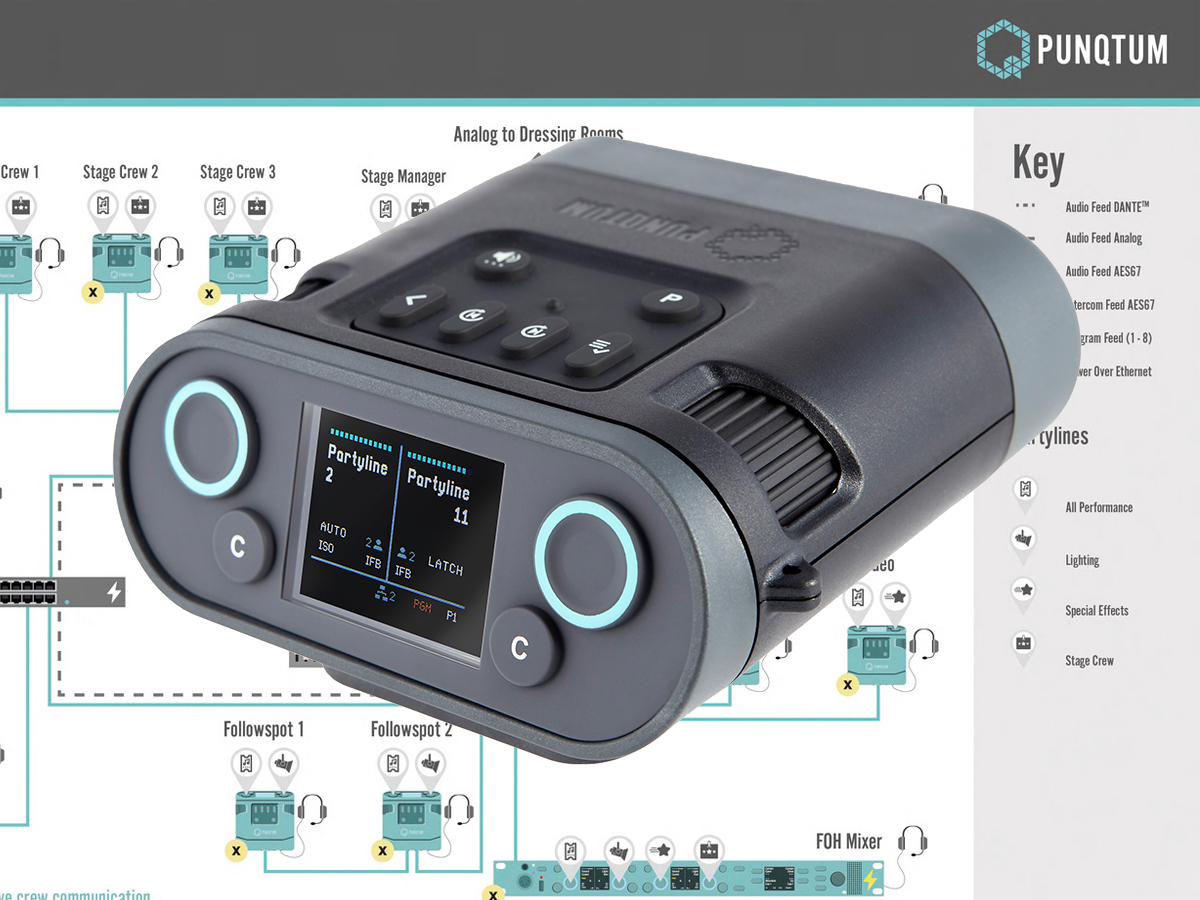 The company's approach evolves freely from small to large systems, starting with just 2 beltpacks and 1 PoE switch as the starter level intercom kit, daisy-chainable for up to 8 beltpacks in a single wire, and allowing up to 32 channels (partylines) for teams in multiple combinations. Most important is the fact that, for the first time in a AoIP network solution, systems can be expanded anytime without fear, allowing for an unlimited number of beltpacks in a system and infinite systems in a network. That is the expertise of Arie's engineering team, allowing for a fully synchronized solution using AES67, with intelligence in the background that allows users to connect and disconnect equipment without the need of "technical support” - and without breaking the system. In a way, just like analog, but without the strong analog limitations.

And all punQtum intercom systems were carefully designed without bells and whistles, for intuitive use and incorporating clever features, like a replay function for missed or unintelligible announcements, a “voice-mail” feature, free configurable security with PIN protection for network and role access, and even integrated recording. Everything using existing IT infrastructure and open audio IP standards, compatible to AES67, Ravenna and Dante audio networks.

However, the technology is only one part of the punQtum experience. What sets the company apart is the community-based approach. As Arie van den Broek explains: "Instead of the traditional distributor/dealer model punQtum talks to the professionals directly. The company is interested in the community’s expertise and experience but also in theccommunity’s demand and ideas. We believe that collaboration and shared experience is the route to success and that is why we are fully committed to the community model."

Products are available directly online on the company’s website. Anyone who actually uses the punQtum products and recommends it to others will be rewarded directly for it and providing additional technical support will even allow a nice revenue. “This is our understanding of a community. We are not only talking to and supporting each other. We also share the profit."

punQtum also believes that the company's products will finally make network solutions the industry standard. "Using network technology makes total sense," Arie adds. "Ethernet is available in many places already, and we designed our beltpacks and speaker stations to be plug-and-play and as easy as analog."

The first products from the new company were shipped in February 2020, including the Q110 Beltpack, designed for easy, plug-and-play operation, with ergonomically designed buttons and an easy-to-read color display. In a stand-alone capacity the Q110 offers instant access to two channels of partyline intercom, and all powered via standard PoE switches.

This is the first element of a larger networked intercom system that offers up to 32 partylines via standard IP networks and infrastructures. Furthermore, punQtum will shortly release a multi-platform editing software for easy configuration and management of systems.
www.punqtum.com
related items