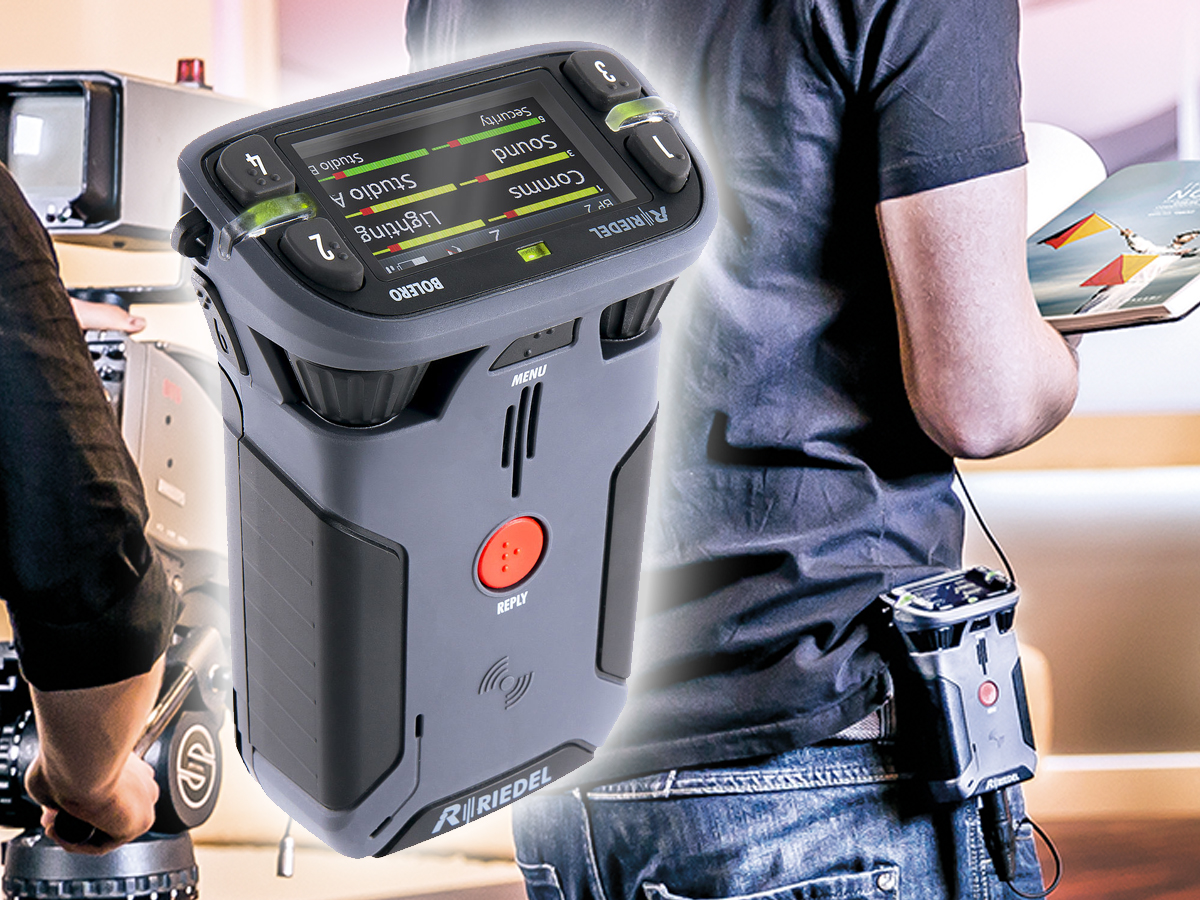 Bolero is similar to those traditional Motorola two-way radios that are still mandatory for any production crew during big events. But "similar" only in the fact that it can be used for the same purpose with huge advantages. The solution is fully integrated into Riedel's Artist digital matrix intercom platform and offers a rich set of features and connectivity that can be applied three ways: as an exceptional wireless beltpack, as a wireless keypanel, and — in an industry first — as a walkie-talkie radio. More importantly, the system runs over a standards-based AES67 IP network, and its decentralized antennas connect to AES67 switches and then to Artist frames equipped with AES67 client cards to provide a fully integrated point-to-point intercom ecosystem with seamless roaming capabilities.

To the system, the beltpacks look just like Riedel panels but are wireless, providing the highest levels of flexibility and programmability. The Bolero high-clarity voice codec provides both higher speech intelligibility and more efficient use of RF spectrum supporting twice the number of beltpacks per antenna for the same audio bandwidth as other DECT-based systems. The codec has exceptional latency characteristics while being very efficient with processing power, providing excellent beltpack battery life, and saving DSP processing power for other functions.

"When we designed Bolero, we wanted to make life as easy for the customer as possible. Registration can be a complex process that requires a user to go into the beltpack menu and apply a pin code so the beltpack can be registered to the antennas. This process can easily take 2 mins per beltpack. Imagine doing that for 25 beltpacks," says Jake Dodson, Director of Product Management at Riedel Communications. "Bolero incorporates Near Field Communication technology into both the beltpack and the active antenna. The user needs only to touch the beltpack to the antenna to complete the registration process."

The beltpacks support Bluetooth 4.1, allowing either a Bluetooth headset or a Smartphone to be connected. When a Smartphone is connected, the beltpack can act like a car' "hands free" setup so the user can receive calls on their phone and talk and listen via their beltpack headset. Users can also make calls and then connect that person into the intercom matrix, eliminating the need for a telephone hybrid.

Based on Riedel's extensive rental experience, the beltpacks use a combination of premium materials, including high-impact plastics and rubber overmolds, to create a tough device with an ergonomic feel that provides easy use and handling. The display can be inverted so that it is readable in any orientation.

The beltpack itself features six buttons for each of the six intercom channels, plus a separate "Reply" button that easily facilitates a reply to the last channel that called. Finally, in an industry first, the beltpack can be used without a headset like a walkie-talkie radio utilizing an integrated mic and speaker.

"Bolero is a category-changer for wireless intercom systems," says Thomas Riedel, the founder and CEO of Riedel Communications. "A lot of time and effort has gone into every phase of Bolero's development, a true ground-up development touching all aspects of design. We are proud to share that the BBC is already building their new studio intercom systems around the Bolero wireless concept."
www.riedel.net
related items