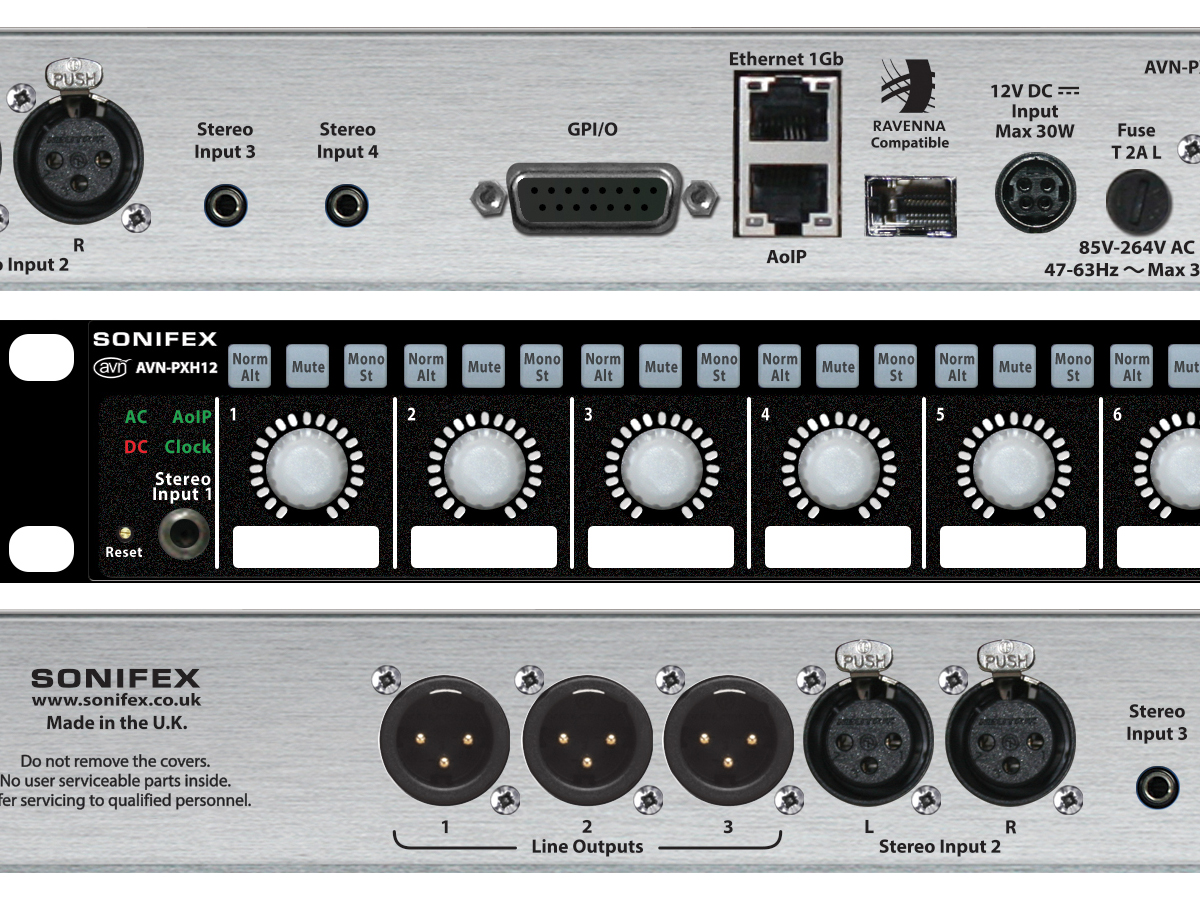 Over the last year, Sonifex worked with a UK TV broadcaster to produce a product which solved a problem that they had, and one which many more broadcasters are facing: With audio moving to the AoIP network infrastructure allowing hundreds of audio sources to be available on the network, how do you easily monitor them, in a product which is simple to use and without adding complexity?

The broadcaster in question has up to a thousand audio sources on their network, available through a large router/mixer and they wanted a device at each position in their main Production Gallery/Control Room which could select multiple audio sources and either mix them down for monitoring, or select them individually. These would largely be AES67 audio sources but they would also need to be combined with physical audio sources available locally.

What Sonifex came up with was the AVN-PXH12, a 24 input monitor mixer in a 1U rack frame. The Sonifex AVN-PXH12 is a monitor-mixer primarily designed for monitoring Audio Over IP audio channels in a compact 1U format rack. Any AES67 audio channels on your network can be assigned to input channels on the unit and mixed down to analogue outputs, a headphone output and built-in speaker.

It is a stereo monitoring device that allows to monitor up to 12 audio sources, from an input total of 24, at any one time. The 24 audio sources can be selected from 4 discrete stereo analogue audio inputs (1 x front panel 3.5mm jack socket, 2 x rear panel 3.5mm jack sockets and 1 x rear panel stereo XLR input pair) or from any RAVENNA, AES67 or AES67-enabled Dante AoIP connected streams.

The knob for each channel controls the level of the input routed to the output and the knob also illuminates either green, amber or red to show input level. Pressing the knob ‘Solos’ the channel input to the output. Front panel LEDs show the AoIP network status, synchronization status and the status of the AC and DC power supply inputs.

The front panel has 3 outputs: paralleled stereo headphones on 6.35mm (1/4") jack and 3.5mm jack sockets, each with their own individual attenuation settings, and a mono-mix speaker output. There are discrete volume controls for the headphones and the speaker, and the latter also has a mute button.

The rear panel has an additional 3 line level XLR-3 audio outputs, which can be designated as mono mix or left or right channel outputs of the mixed audio content (similar to the speaker and headphone outputs respectively), or any of the physical inputs or AoIP input sources.

The unit also sends to the network, as AoIP AES67 streams, the 8 channels of the 4 physical stereo inputs, together with a stereo mix of the speaker output. The unit can act as a PTP masterclock or slave clock and supports IEEE1588-2008 PTPv2 media and default profiles.

The rear panel contains IEC mains and secondary DC power inputs which provide power redundancy to the product. There are two Ethernet RJ45 connections (control and AoIP) and there is an Ethernet SFP module that, when used, replaces the AoIP RJ45 connection.

A rear panel GPIO connector provides 10 local ports which can be user configured as inputs or outputs and provide software controlled functionality. A voltage free relay contact can be used to operate external equipment.

A built-in web server provides complete configuration control of the unit including source assignment to each channel and also allows for firmware updates and configuration backup. The unit can be controlled by suitable Ember+ commands.

The AVN-PXH12 was designed to overcome a specific monitoring problem in the world of AoIP and it does this well. It provides a simple 1U rack interface for mixing and monitoring up to 24 audio sources. The product is shipping now and will be displayed on the Sonifex stand 8.E61 at IBC 2017.
www.sonifex.co.uk/avn/avn-pxh12.shtml
related items