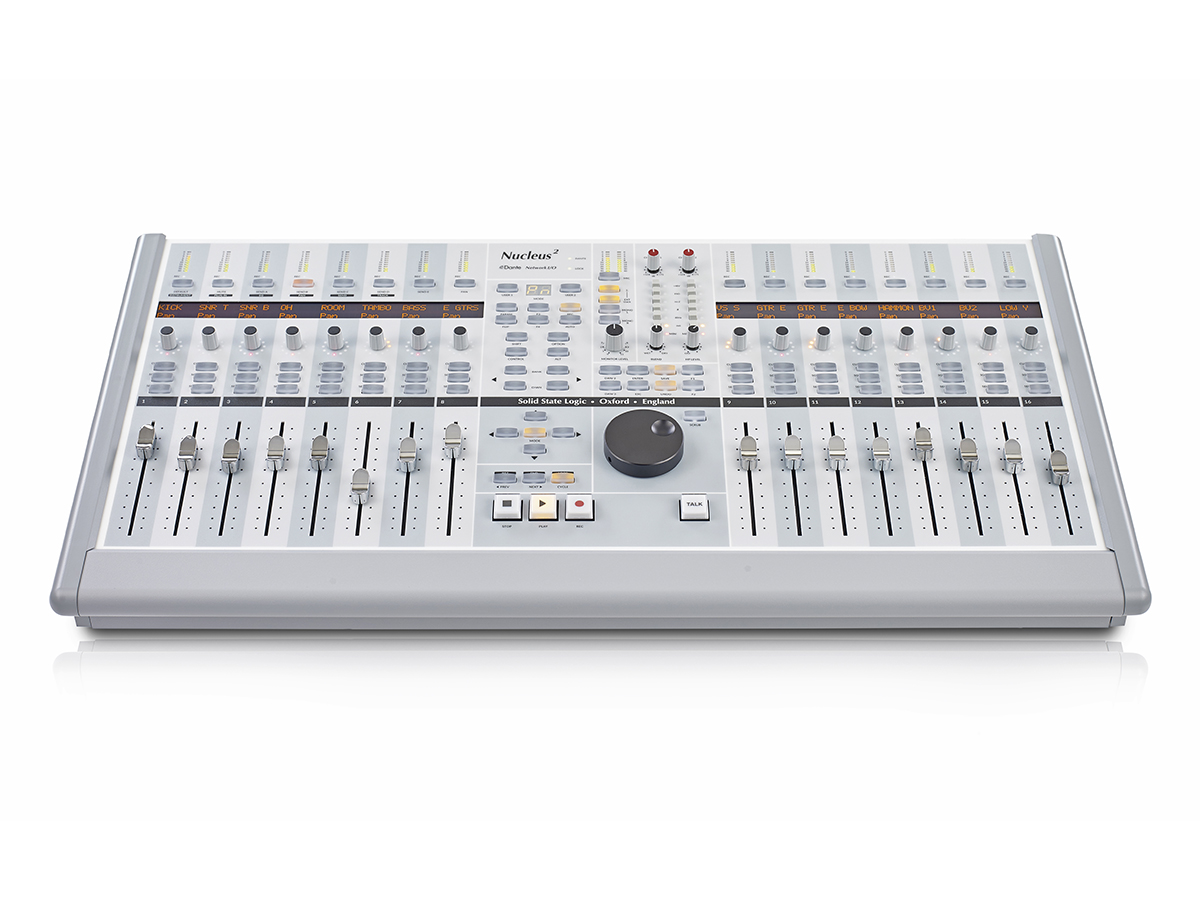 Since the original release in 2010, Nucleus has been hugely successful, won TEC and MIPA awards, and is recognized as a unique proposition for professional in-the-box producers who require outstanding multi-DAW control, SSL console grade mic pre’s, DAW I/O and studio monitoring. Nucleus2 responds to users’ requests with the addition of talkback, main/mini monitor switching, a change from USB to Dante connectivity and a new cool white look.

Few other control surfaces feel as good under the fingers as the original Nucleus, and five years down the line SSL felt it was time to add some features that customers have requested to make Nucleus2 an even better fit for the professional in-the-box studio. A key addition is a Talkback input with adjustable gain that feeds the headphone output. A large TALK button is added near the transport controls and the talk circuit can trigger a switchable -20dB DIM in the monitor outputs if desired. Another popular request was the addition of a second set of speaker outputs and a ‘MINI’ monitor button in the centre section for comparing mixes on different systems.

The USB soundcard in Nucleus has been replaced with a new SSL Dante ‘Network I/O’ audio interface. Dante is a professional audio networking technology that uses standard Ethernet to connect devices to computers. In a personal studio where direct connectivity to a DAW computer is required, Dante is a simple ‘single Ethernet cable’ alternative to Thunderbolt or USB, with latency of only 4ms when used with the supplied Dante Virtual Soundcard software running on your DAW computer. In a larger multi-space facility Dante is a state of the art audio over IP audio networking technology that facilitates low latency audio sharing between multiple computers.

Dante also enables users to combine audio devices from a wide range of audio manufacturers on a network and share audio between them. As of September 2016 over 350 audio brands have adopted Dante into more than 800 products and the great thing about a Dante network is that it’s scalable; adding additional mic pre’s or extra analogue outputs is as simple as plugging another Dante device onto the network, where it is automatically detected and ready to use. To help your networked world Nucleus2 has an inbuilt network switch with two Ethernet ports; one port for connection to your computer, and one port for adding other Dante devices to your setup. Finally, to make sure we’re making our network “smart” the Talkback signal can be switched to feed channel 2 of the Dante interface for remote communication to other rooms over a network.

Nucleus2 retains all of the good things from the original Nucleus; high-quality motorized faders, metal chassis, big weighty jog wheel, heavy duty transport buttons, control of three DAWs simultaneously, and that assembled-with-love-in-the-UK glow. Nucleus2 is a complete solution for the professional in the box producer – someone whose world is centered around multiple projects, recall, fast workflow, and creative inspiration. It has all the tools needed to turn a computer into a hands-on mixing machine, without letting technology get in the way of ideas.

Nucleus2 will be available from November 2016.
www.solidstatelogic.com
related items