The announcement at AES 2016, of a Danish professional audio partnership between DAD and Dynaudio, comes at a crucial moment for Dynaudio’s PRO division, currently renewing its catalogue of reference monitors. The two companies confirmed they will “join forces in taking professional monitoring to the next level.”

Dynaudio’s PRO division has supplied countless top studios with monitoring solutions over several decades. Similarly, DAD is now an industry standard in audio routing and distribution, which taps naturally into complex monitoring setups, spanning surround formats and 3D audio. Therefore, it was a natural next step for DAD to develop the ProMon license, which effectively turns their AX32 or DX32 audio router/converter into a monitor controller.

Now, the two companies join forces to develop high-end monitoring systems for music, film, post and broadcast production, as well as audio mastering. “I am very happy about this new partnership with another great, Danish audio company,” says Sebastian Rodens, Dynaudio PRO product manager. “It’s a perfect match, as many DAD and Dynaudio products actually share space in many pro audio facilities already, only in different parts of the monitoring signal chain. Further, DAD has become the top choice in monitor control for the best studios around the world, and once we had investigated the ProMon monitor solution in depth we instantly knew we had found the perfect monitor control centerpiece. It is quite simply the ideal companion to our monitors.”

Mikael Vest, Sales Director at Digital Audio Denmark, was equally excited about the potential: “With the audio routing capabilities of AX32/DX32, it was a logical next step for us to look into expanding the functionality with a dedicated focus on monitor control. The result was ProMon, which has been a great success, so when Dynaudio suggested a partnership to develop this specific area even further, we were immediately intrigued. Dynaudio has produced world-class monitors for audio professionals for years and working together with them on a monitor system where each company contribute with their particular fields of expertise that complement each other is extremely promising.”

More details on this pro audio collaboration will be revealed as it progresses. The first results of the joint venture are expected to see the light of day during 2017. At the Audio Engineering Society's convention in Los Angeles, signs of the cooperation were already visible, with DAD demonstrating its new Pro Mon 2 monitor control license for the AX32 interface together with Dynaudio. DAD also supplied Dynaudio with an AX32 for their listening room where they showed the new, high-end M5P Evidence mastering monitors.

As members of the Media Networking Alliance, DAD was also promoting the adoption of the AES67 standard for Audio over IP with their existing solutions based on Audinate’s Dante protocol. The new DAD AX32 interface was confirmed to be already AES67-compatible. DAD promoted the networked audio possibilities of its AX32 with other Dante AoIP solutions and was using a Dante connection send outputs to a KLANG:technologies’ 4-channel headphone preamp, allowing any of the channel(s) to be routed to any of the 4 headphone outputs

Finally, DAD also introduced its new monitoring solution with the new Monitor Operating Module (MOM), of which we learned about during the IBC 2016 show in Amsterdam. The compact desktop controller features a large gold-aluminum knob with bearings, jack input for footswitch, and 10 configurable buttons, which allow assigning sources to speakers, talkback, and any other function like mute, dim, mono, etc. The controller can be configured to the desired Pro Mon 2 function in the DADman software and all controls are synchronized both ways with DADman, Eucon or MIDI.

Avid Pro Tools MTRX
Also during the AES 2016 event, DAD and Avid revealed a cooperation between the two companies, already taking shape in an OEM version of the AX32 - sold by Avid as the Pro Tools MTRX. This is a versatile new audio interface for Pro Tools HDX and HD Native, using DAD’s high-quality AD and DA converters — along with monitoring, I/O, and routing capabilities — all in one powerful unit. 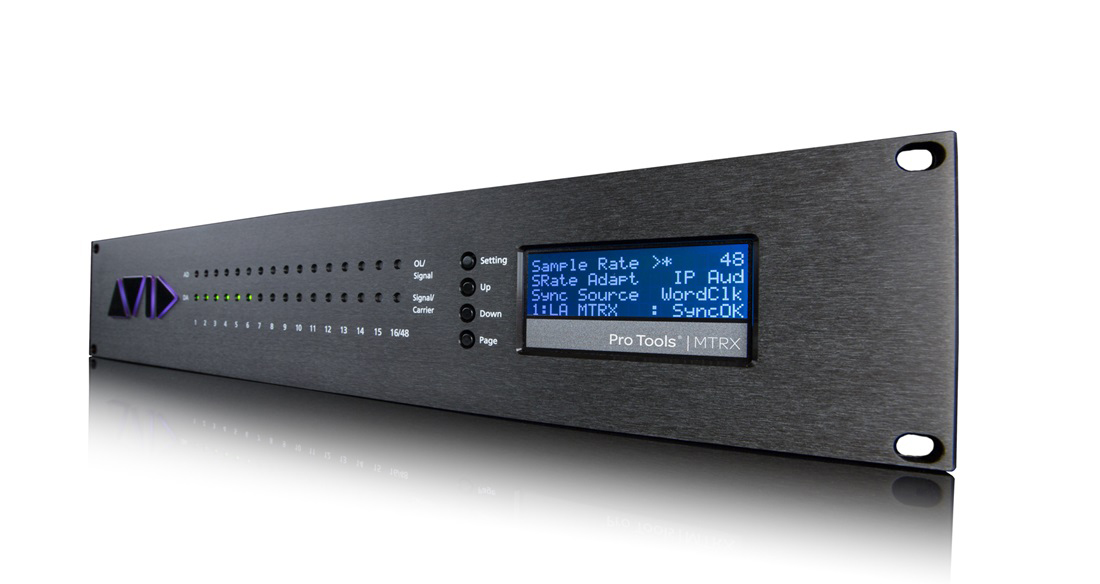