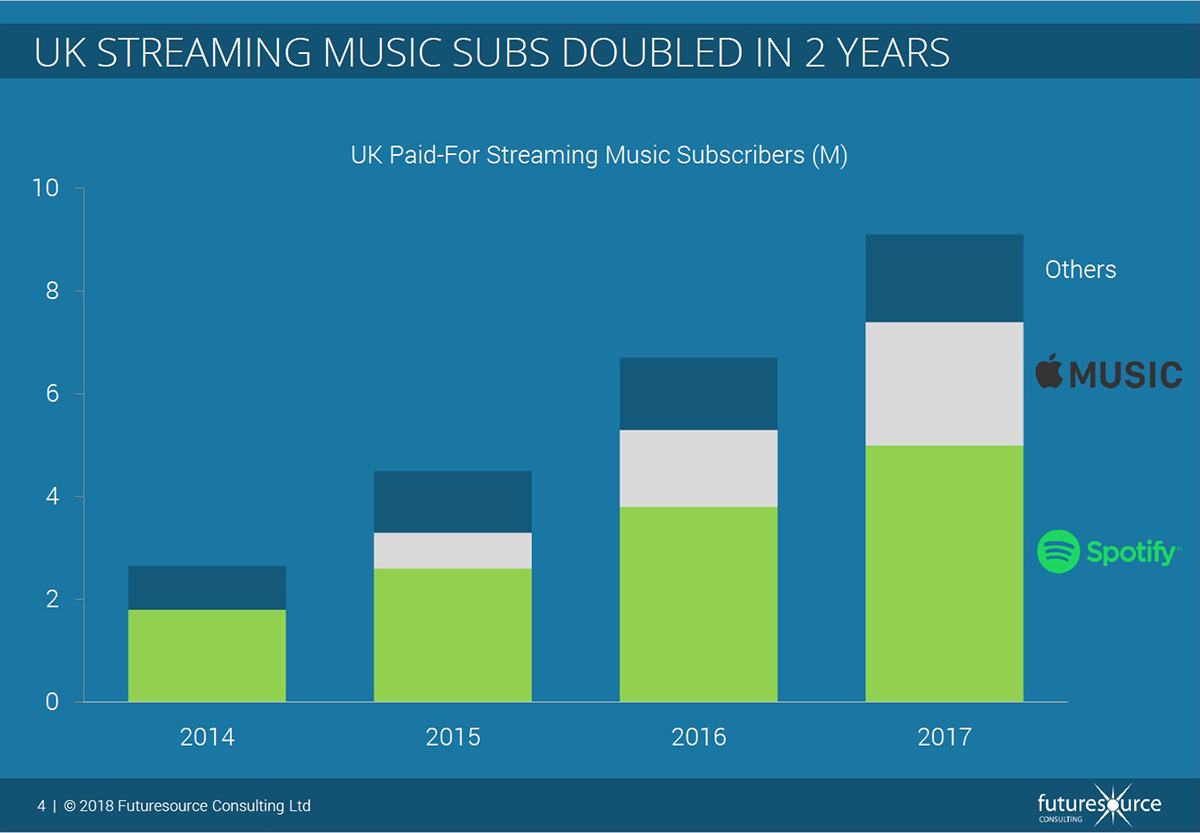 Consumer spend on music in the UK has grown by over 30% over the last 3 years after a torrid decade prior to this. This audio renaissance has been driven largely by 2 factors – the three-fold increase in streaming music subscription in this period (with total subscriptions exceeding 9 million in 2017) and more recently, the quadrupling in the installed base of wireless speakers, with 16 million units now in UK homes.

Spending on dedicated audio hardware is back in vogue after playing second fiddle to tablets, smartphones and TVs for many years. But it is the smart speaker segment that is truly driving digital music consumption to another level entirely. Back in the home, after iPods and smartphones provided a 10 year+ resurgence in personal audio; this is continuing with the booming headphones market. 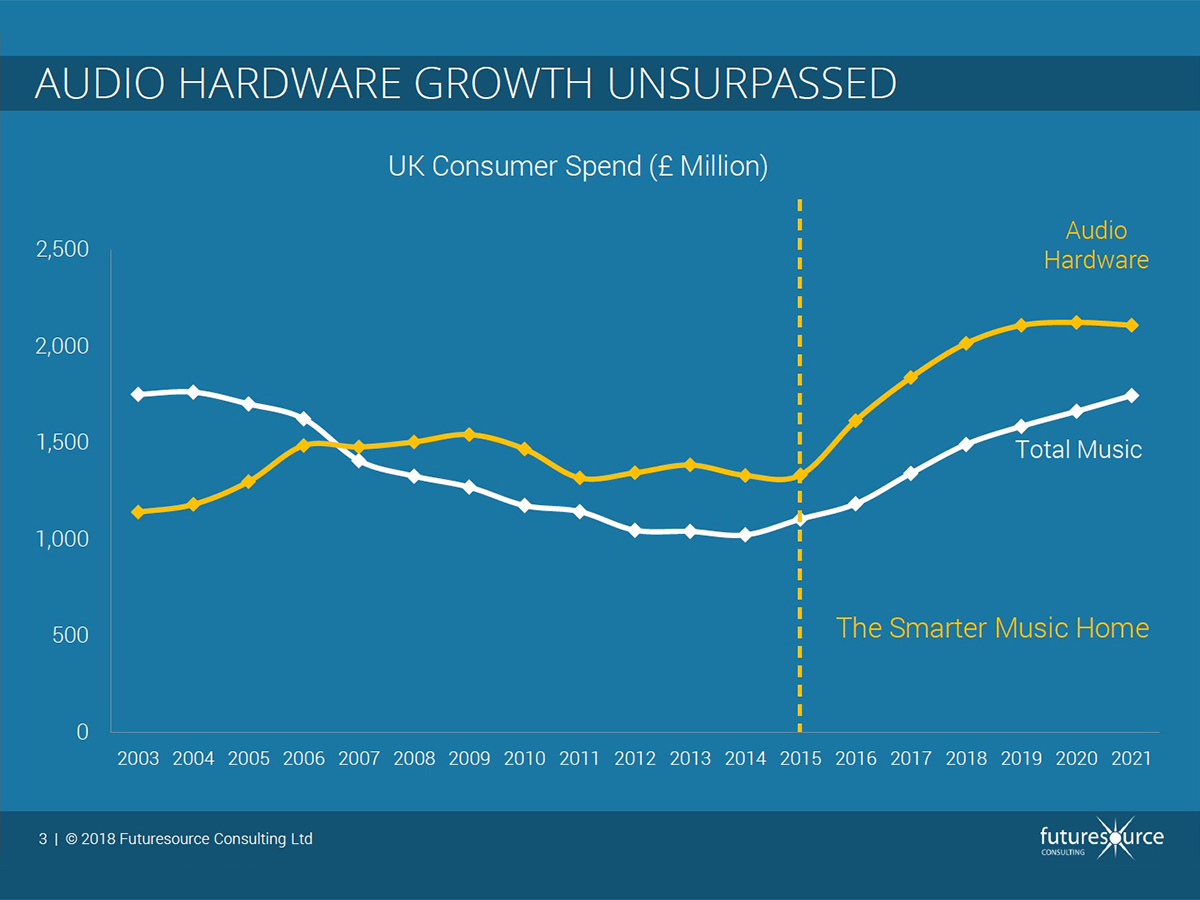 It is the voice assistant feature of smart speakers that is providing most excitement. Amazon’s Echo speaker range has been embraced by many, providing seamless music listening and discovery, along with providing access to other Alexa skills. Paul Firth from Amazon spoke at the event of user testimonials claiming that they were in love with Alexa, they were part of the family or she was their best friend. It is these emotive feelings for the product that have made it very much a part of people’s lives.

2017 proved be a breakthrough year for voice control in the home – as smart speakers became mass market, with a plethora of launches spilling over into 2018, with Apple’s belated HomePod launch. As such, UK smart speakers in use are set to double once more in 2018, to reach nearly 8 million units.

Futuresouce’s consumer research suggests that, whilst music streaming and selection is unsurprisingly the most commonly used feature, 30% of smart speaker owners use it to discover new music and over three-quarters of these do so every day. However, this new way to discover music was tempered by the panelists at the event, highlighting that voice commands were causing headache for some labels, managers and artists. Many artists and their music titles are not being recognized through voice commands, or commands are too ambiguous. For example, which version of Beethoven’s fifth will Alexa choose to play with dozens of versions available? Some artists simply have too quirky names, or use slang terms which are just not recognized, leaving their music isolated outside of this exploding ecosystem; discovering music is clearly not the same as being discoverable. This is a problem which is requiring improved and potentially new strands of metadata to help resolve the issue.

Scott Cohen from the Orchard also highlighted that this rate of streaming subscription growth will predictably slow, so what can the industry do now to prepare and ultimately empower potential future experiences? Pete Downton of 7Digital added further context to this, saying that there is a big opportunity to add value beyond the music and audio, bringing artist stories to life and providing context to a musical piece. 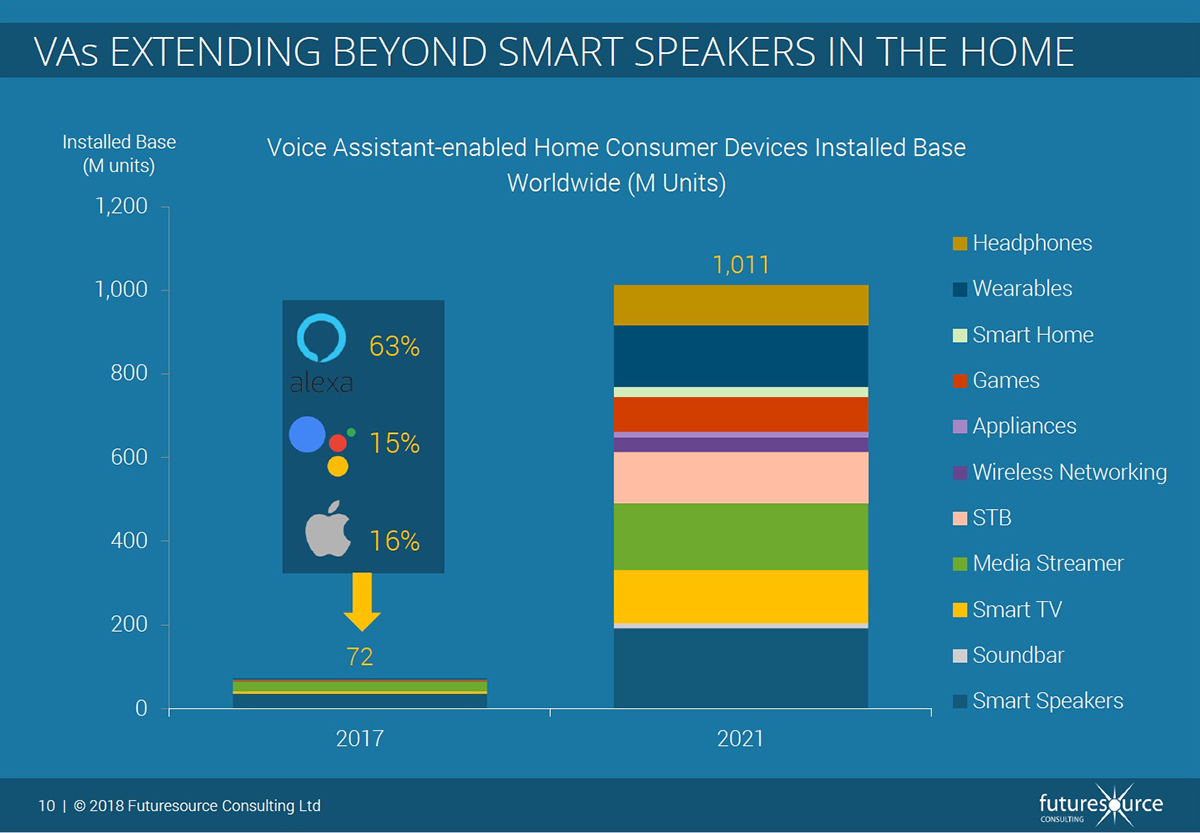 The rate of change in the last 2-3 years has been staggering and will continue as voice pervades many other devices in the home such as TV’s, set-top boxes and fridges! We are just scratching the surface of what could be possible in driving music engagement and consumption.

Futuresource presented their insights on Smart Speakers, looking at their rapid market penetration and their impact on music consumption. To download the full presentation, please click here>>