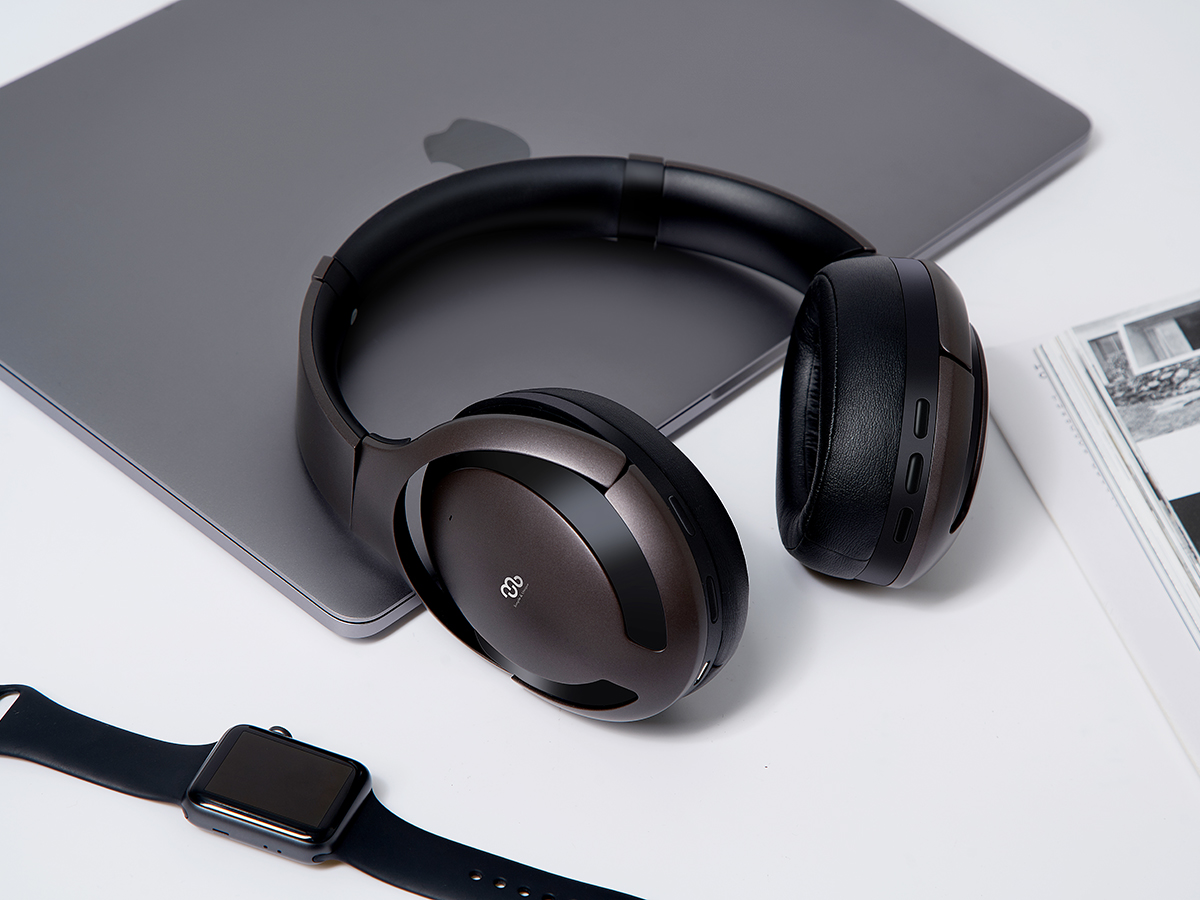 Senji has operations in Los Angeles, Texas, and Shenzhen China. The company was created by a team of industry professionals with 10+ years os experience in both startups and big companies such as Microsoft and Honeywell. Teaming up with engineers and experts combining best-in-class acoustic know-how, cutting-edge digital signal processing technologies, headphone design insights, and manufacturing background, they have spent two years developing the Mu6 headphones, creating a product that could sell at very competitive prices and still provide the best listening experience.

Active noise-cancellation was one of the major focus in designing the circumaural design for the Mu6 headphones. The model has dual microphones on the exterior and interior of each earcup (feedback & feedforward mic) to continuously measure and pinpoint ambient noises. The hybrid active noise-cancellation system provides 25dB reduction on average from 20 to 1000Hz, with two ANC levels (Quiet / Very Quiet). The special high-density memory foam material in the headphone cuffs block noise effectively from 2500 to 20000 Hz, a much broader range than most headphones. The combined solution not only suppresses noise over a wider frequency range but also adapts to and corrects errors while being less sensitive to sound angle and user wear. 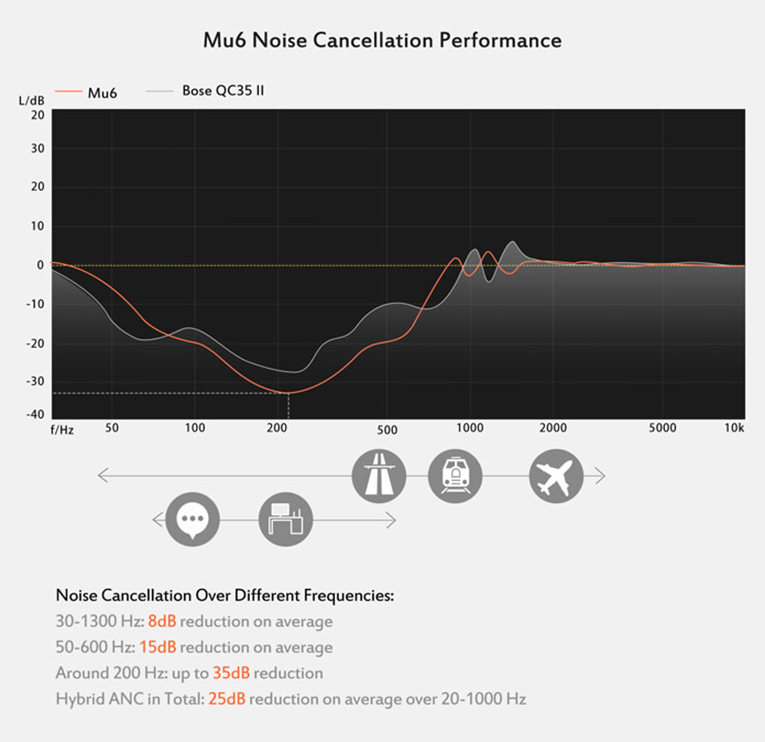 “We conducted in-depth audio lab tests and they showed Mu6’s ANC performed equivalent to or better than the top ANC headphones on the market including Bose QC35,” states Senji co-founder, Minming Gu.

According to Senji's Indiegogo campaign page, when users want to be able to hear their surroundings, they can simply turn on Transparency Mode. This function enables users to hear background noise while wearing the headphones — perfect for ensuring safety and awareness of one’s surroundings while walking or biking. Users can control the amount of environmental noise they want to let in or block out with ANC ON / OFF Modes and Transparency Mode. 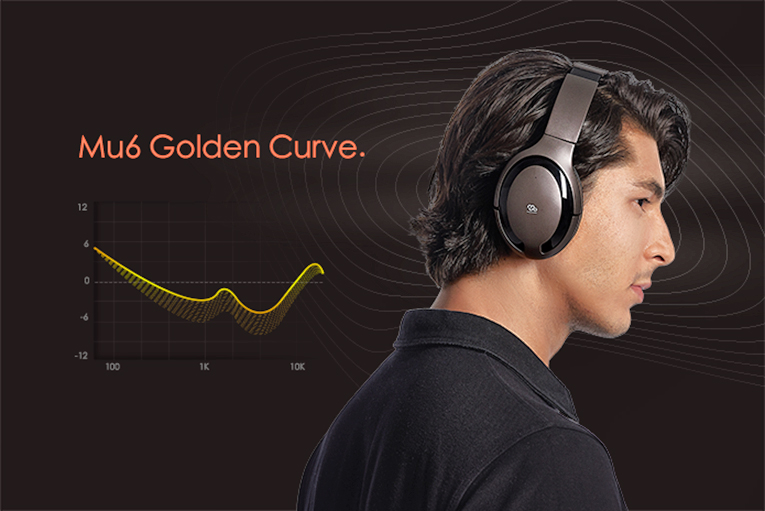 In addition to Mu6’s high-performing noise cancellation, the headphones include several smart features aimed at increasing sound customization and convenience for the listeners. The Hearing Optimization feature can be used to test the listener’s hearing capability on different frequencies. It then uses an algorithm to compensate for any hearing loss by matching it to the Mu6 Golden Curve. All this information is conveniently located in the Mu6 app where users can further customize the music experience with Mu6, using the app to select their desired EQ, such as pop, rock, jazz, hi-fi, or original equalization settings. They can also create their own unique profile, customized to their hearing, including separate left and right imbalances.

Inside the headphones earcups are two powerful 40mm dynamic drivers, utilizing a cutting-edge polymer diaphragm, while the radio circuit uses a Qualcomm Apt-X LL codec and CSR Bluetooth 5.0. This results in a "better-than-CD" listening experience and clear calls. The Apt-X LL audio reduces delay and improves the end-to-end speed of the audio transmission, resulting in a high quality and synchronized sound. The Mu6 headphones also include a completely new Wireless Charging Stand that allows users to charge their headphones wire-free by adopting a magnetic power contact.

Mu6’s smart controls were also designed to be intuitive. When users need to have a quick conversation while they’re wearing the headphones, they can use Smart Touch and Talk. To do so, they simply cup the left side with their hand, which temporarily lowers the sound of their music and increases the volume of human voices. Other smart features include Auto Pause and Play which pauses music when users remove their headphones. Unlike most headphones that use pressure sensors or 3D touch tech, the Mu6 headphones use a more accurate Infrared Distance Sensor for these features. 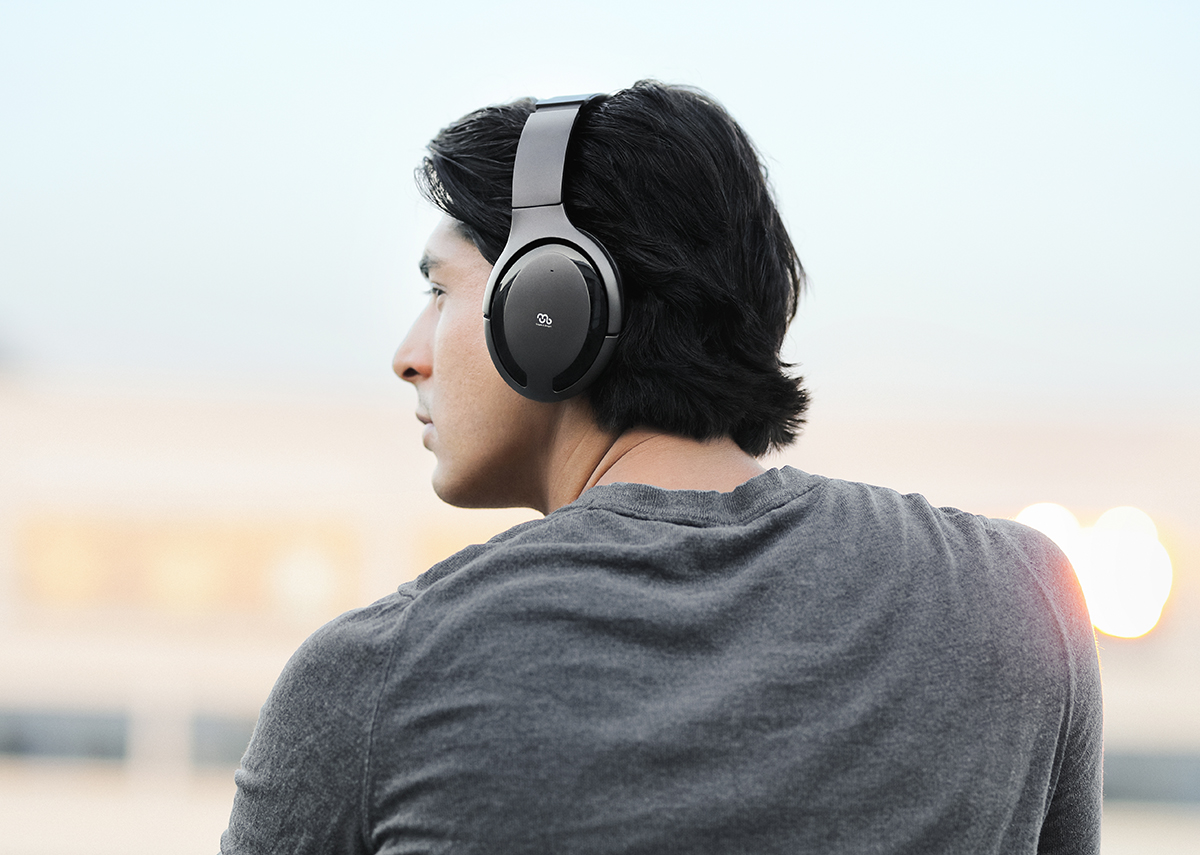 “With Mu6, we wanted to offer the whole package: top performing noise cancellation, flexibility, customization, and smart features, without compromising sound quality,” adds Gu. The Mu6 Indiegogo launching campaign will be available until mid December 2019, with prices starting at $129 USD ($249 regular price after the campaign). The campaign is already over the funding target, and estimated delivery date is March 2019. Let's see if Senji makes it.
www.indiegogo.com/projects/mu6-affordable-smart-noise-canceling-headphones
related items