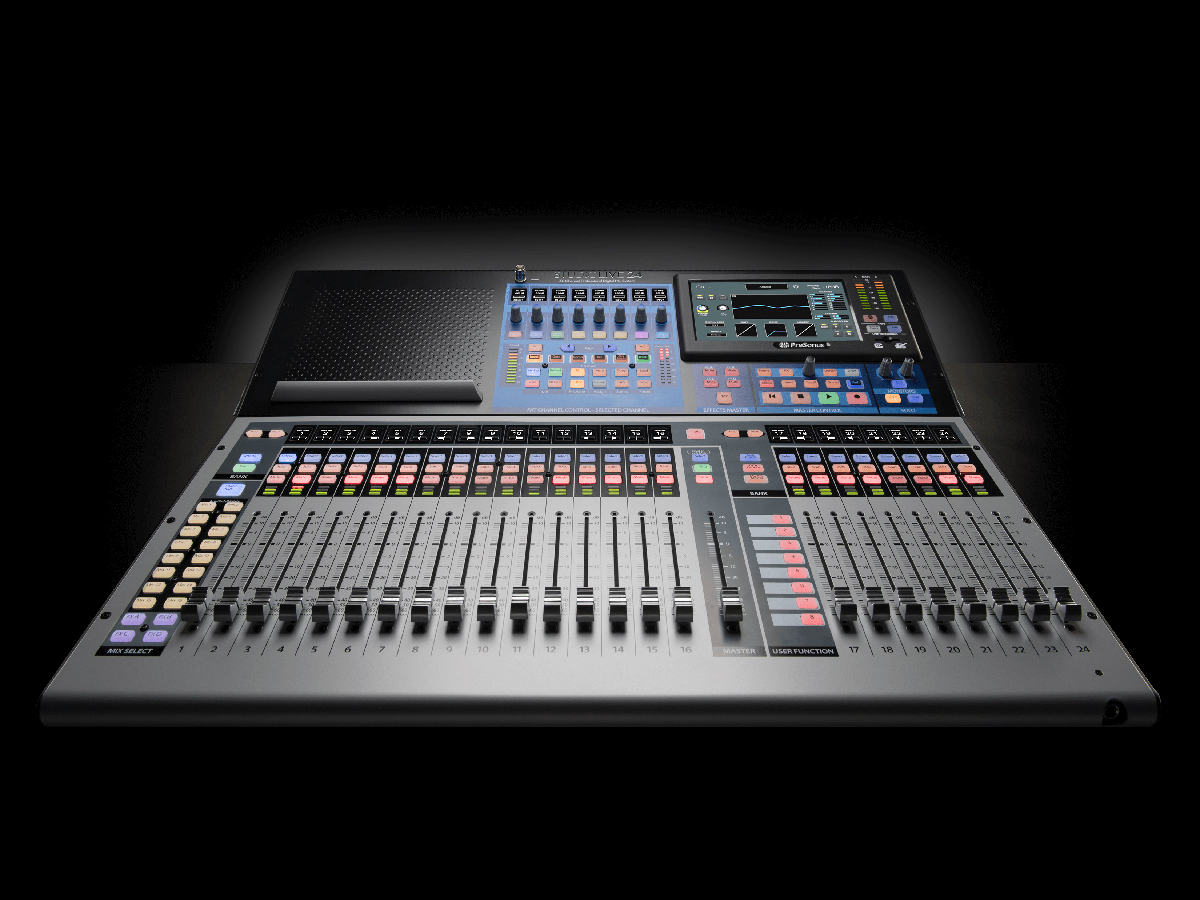 Following the introduction of its StudioLive Series III consoles at NAMM 2017, PreSonus is strengthening the range with an middle model that fits rights in the current workflow of most project studios, while reaching a price level that makes it attractive to any producer or touring act looking for a complete mixing and recording solution. Besides the recognized capabilities for live sound mixing of the PreSonus StudioLive range, PreSonus is adding a new level of multitrack recording integration, both directly on the console and also as a complete DAW-controllable system to its Series III consoles.

Like all Series III consoles, StudioLive 24 further improves on the StudioLive’s ease of use while letting users customize workflow and operations to fit the way they work. All Series III consoles feature touch-sensitive, motorized faders, recallable XMAX Class A preamps, and the full 32-channel mix DSP under the hood. Also featuring AVB network connectivity, the series is able to expand into more complex configurations, with more channels simply by adding external AVB break-out boxes.

With the PreSonus StudioLive Series III mixers, users are able to do complete multitrack recording sessions without a computer. PreSonus Capture multitrack recording software with virtual soundcheck is installed directly into the consoles, enabling users to record up to 34 tracks to the onboard SD recorder. When finished recording, users scan open the Capture session in Studio One for Mac and Windows (software is included in the price), and the entire mix scene will also transfer to the Studio One session, including fader levels and Fat Channel settings.

Combining the best of both worlds, with a dedicated hardware mixing and control surface with all the power of plug-ins, automation and DAW integration, these consoles represent enormous value. They offer studio quality sound with a plug-in-style workflow that features vintage-style EQ and compression options on every channel, from classic tube limiters to passive EQs, directly integrated in the consoles and with touch-screen control. These processors were meticulously created in-house with state space modeling circuit emulation technology to match the sounds of real analog outboard gear. 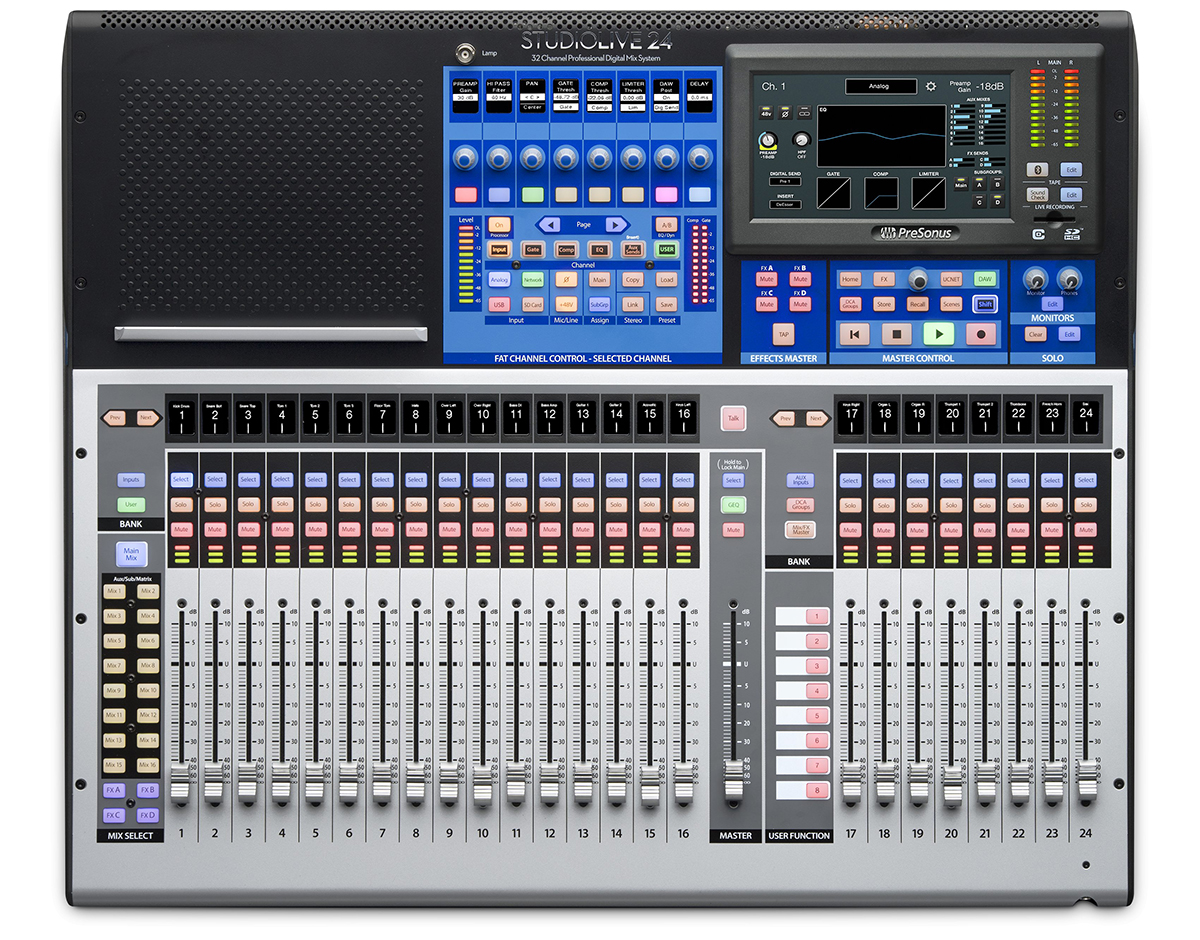 But the new StudioLive Series III also improves on the ergonomics of the mixing console itself, by adapting to the way users work. User layers for the channel faders allow placing any channel, DCA master, or bus fader anywhere desired — and they’re easy to set up. Users can customize Fat Channel layouts, putting the parameters they care about the most right at their fingertips, and there are several workflow options to personalize the mixing experience.

Scenes can also be extensively customized, including a Scene Safe feature that prevents a scene change from altering the settings on designated “safe” channels. Similarly, Fat Channel presets have, for practical purposes, become like scenes for individual channels, not only saving input and Fat Channel settings but also aux send and bus assignments. Of course users can also use preset filters to choose what they want to recall.

In addition to 4 fixed subgroups, StudioLive Series III consoles offer 16 FlexMixes that can be individually designated as aux, subgroup, or matrix mixes, for a total of 20 mix buses, not counting the main mix, effects mixes, and solo buses. Twenty-four DCAs enable easy, flexible control of groups of channels.

But probably one of the most exciting aspects of the StudioLive Series III is the interface options, which allow users to adapt to live or studio environments. An AVB Ethernet connection enables networkwing compatible computers and streaming up to 55 channels of audio to and from a Mac or Windows PC. As PreSonus details, AVB networked solutions, including stage boxes, personal monitor mixers, are coming later in 2017, but the company is also looking at recommending third-party AVB solutions that allow true interoperability.

Apart from AVB Ethernet, the consoles are able to record 40x40 channels via USB 2.0, offering users a choice of computer recording methods. And a separate 1 Gbps Ethernet port can connect to a wireless router or directly to a computer for remote control of virtually all features via a wired or wireless connection - the reason why the console even features a special area to fit an iPad.

PreSonus StudioLive Series III mixers are tightly integrated with an entire suite of state-of-the-art software. Users can mix wirelessly or over a wired network from anywhere using the free UC Surface touch-control software for Mac, Windows, Android, and iPad. For a fast workflow, users can even add a second, third, or even fourth, screen. The StudioLive Series III also allows completely automating virtual soundchecks and record shows with Capture for Mac and Windows (included) — or record with Studio One (included) or with any software that supports ASIO or Core Audio. Musicians can control their monitor mixes onstage with the free QMix-UC app for iPhone, iPod touch, and Android devices.

The StudioLive 32 comes bundled with Studio One Professional, while the StudioLive 16 and StudioLive 24 come with Studio One Artist. With either version of this easy-to-use DAW, users can remote control any StudioLive Series III mixer’s recallable XMAX preamps and Fat Channel processing for low-latency recording with effects. To further enhance productions, PreSonus also bundled the Studio Magic Plug-in Suite for Mac and Windows, which includes seven popular plug-ins in VST, AU, and AAX formats.