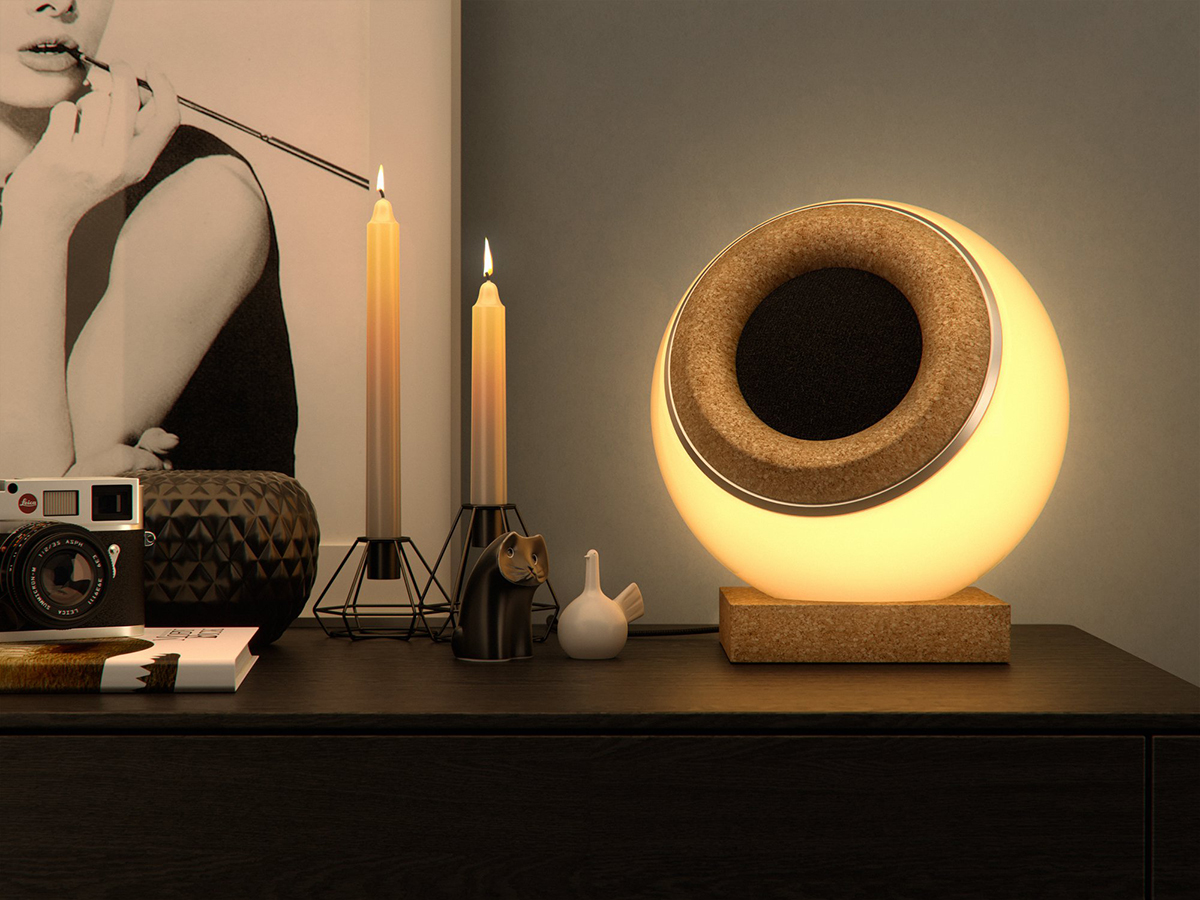 Appealing to technology enthusiasts, minimalists and interior designers, the premium speaker-meets-smart-lamp Oupio is essentially a nice integrated concept that allows the user to have full control of a room’s ambience. That is, combining good quality sound with an LED lighting source that covers all the color temperatures of white, from bright white sunlight to warm/yellowish "incandescent-type" white – enabling to match the human natural circadian rhythm and boost productivity.

“As a product designer, I saw a lot of products that fall under the category ‘future landfill materials’,” says Vlad Iorgulescu, founder and designer at Oupio. “But when we began talking about this to customers of our design and engineering consultancy Creative Pill, we realized it’s a shared desire to build things that last – both in their function and their aesthetic.”

With a background in architecture, Vlad decided to apply this philosophy to product design. Building a small dedicated global team of designers, engineers and audio/electronics specialists, he set out to design a hybrid product that could define a room’s ambiance.

The resulting spherical object has a diameter of 22 centimeters. Crafted from carefully selected wood (oak, ash or cork), glass (white opal) and anodized aluminum, Oupio is also modular. Its modularity means it can be installed anywhere – whether as a pendant or desk lamp. The wood is used at the front and when combined with the wool based fabric that covers the speakers, builds a cohesive image for the entire product. The textile used to cover the speaker has been tested for sound absorption and is built to allow the sound to easily pass through while keeping all the inner components of the product out of sight.

The white glass offers a warm even glow when the light is on and contrasts nicely with the aluminum ring. The ring acts as a visual placeholder for the touch interface of the product. Through the touch interface, both sound and light can be controlled. Depending on how many fingers you use on the touch, users can control Play / Pause music or turn the light On / Off, while Touch and Hold modifies the light color, and swipes adjust the volume of the music or the intensity of the light. There's also a smartphone app for more control over Oupio and the to allow controlling groups of up to 5 units, adjust EQ settings, set an alarm and much more.

The whole concept is both simple and ambitious. Fully integrating sound with light is not simple at all. “They don’t like being together in the same small space. For example, the LED drivers create noise and the LEDs themselves generate a lot of heat that we needed to dissipate so it would not interfere with the sound. Such challenges explain why somewhat similar existing products on the market are not true hybrids but merely ‘glue’ together different functions into one object. With the glass lamp shade doubling as the actual acoustic chamber, Oupio is a true hybrid," Vlad adds.

By using twenty 1-watt LEDs, Oupio covers the full spectrum of natural white light (2,700K to 6,000K). The LED set produces up to 2,000 lumens and makes it perfect for a modest living room or a large bedroom. Music streaming is done via Bluetooth or audio cable, while groups of up to five Oupio units can be created via a dedicated low-latency network using Wi-Fi.

For the speaker design, the team tried and tested a variety of solutions, including coaxial drivers, finally selecting the patented Balance Mode Radiator (BMR) technology from Tectonic Audio Labs. The compact BMR drivers ensure the sound is distributed evenly throughout a room with two drivers covering frequencies from 65Hz to 20KHz and built-in amplification enabling the speaker to reach 90dB with low distortion and generate a sound distribution over 180 degrees.

Balance Mode Radiators (BMRs) drivers where selected by Oupio, because of their ability to cover full range, while the dispersion uniformity ensures that there won't be any "sweet-spots" making much easier to fill a room with sound regardless of the position of the speaker.

"For us, having great sound is a priority. Because of this we've done tests, calibrations and then started over with some more tests and calibrations. Eventually we found the proper driver configuration that satisfies our pursuit for sound clarity and warmth. Two Balanced Mode Radiators, one woofer and one full range, positioned coaxially, that sum up to 50W of power are now used in Oupio M," the company shares.

The Indiegogo crowdfunding campaign to produce a first production run launched June 26, 2019, and the team is hoping to achieve $50,000 USD with early bird offers starting at $299 (50% OFF) and limited editions of the Oupio M going for $419 USD (30% OFF) with backers able to choose one of 3 material combinations (Ash, Oak or Cork). Check the Indiegogo campaign here: https://igg.me/at/oupio

Overall, we think the product concept is solid and well designed, but Oupio will need all the support they can get if effectively they want to start shipments in July 2020, as they announced.
www.tectonicaudiolabs.com
www.oupio.com
related items