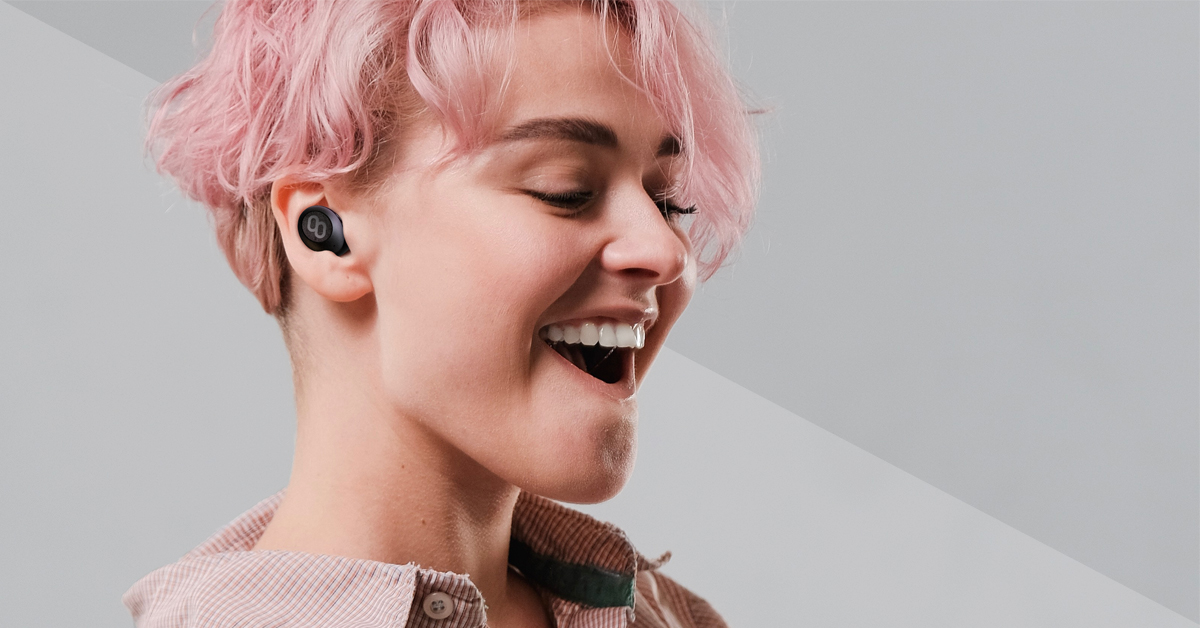 As the company describes, the new Mymanu CLIK S earbuds are designed for “people who want to easily share their experiences with loved ones or those who want to fully immerse themselves in local culture by having the ability to communicate with over 2 billion people in 37+ languages. All whilst comfortably listening to their favourite music in HD sound for 30+ hours.”

“Most product reviews from experts and customers on specialist and e-commerce sites, show that when purchasing earbuds most people have to compromise on functions such as sound quality, comfort or design. Indeed, fitness earbuds provide a great fit, waterproof capability but have low to average sound quality, whilst music earphones provide HD sound, However, they can break at the first drop of sweat or rain,” the company states.

The answer to those challenges are exactly the focus for the new Mymanu CLIK S earbuds, which benefit from more than 3 years of Research and Development efforts (and a lot of heat from crowdfunding campaign backers), along with field testing with the world’s largest hospitality companies such as Marriott Hotels and The Louvre Hotel Group. “Offering today and tomorrow’s hyper-connected travellers what they are looking for is crucial. Breaking down language barriers is a key element for the growth of the sector. Feedback gathered in Europe and Asia showed that 90% of guests and staff using Mymanu’s live translation earbuds experienced a more efficient and streamline communication and a more enjoyable stay,” Mymanu adds.

Other features highly rated by users have also been integrated in Mymanu CLIK S providing highest levels of comfort and secure fit thanks to 3 different sizes of silicone and memory foam ear tips, on a smaller earbud size. Next, users rate audio quality, as well as a perfect fit in the ear canal, naturally providing passive noise cancellation whilst being aware of their surroundings. The new CLIK S claims to last for up to 10 hours of music streaming - when fully charged and depending on volume, but even so an absolute breakthrough on TWS earbuds. Associated with the supplied battery charging case, users can get up to 30 hours of use. The earbuds will again ship with the complementary Mymanu Translate app, which supports basic translation into 37+ languages.

Another of the unique features of Mymanu CLIK S is the ability to access all the available functions from either the left or right earbud. This versatility enables users to multitask, so they can connect to any sports, music, video streaming app, or Mymanu Translate all through just the one ear, allowing them to keep the other ear open to their surroundings. Each earbud will be equipped with a single tap function, which users can apply to their own usage profile.

“At Mymanu, we have decided to keep on pushing boundaries. We believe high quality doesn’t have to cost the earth and people shouldn’t have to compromise,” explains Danny Manu, technologist and company founder. “That’s why we have capitalised on our experience in R&D, electronics and ergonomics to launch Mymanu CLIK S - the most versatile, All-In-One earbuds that can be used by fitness, music and travel lovers.”

After launching its first generation CLIK earbuds and the previous generation CLIK+ on crowdfunding platforms Indiegogo and Kickstarter, where the company is still struggling to deliver orders to backers, after facing production and quality issues (latest update states ongoing deliveries until May 2019!), this time Mymanu intends to run a direct pre-order campaign for the CLIK S launch, setting to raise $50K for the initial production run and complete the final tooling. Leveraging the experience with the first generation earbuds, for the new product design Mymanu adopted a Qualcomm QCC3026 flash-programmable Bluetooth Audio System-on-Chip (SoC), designed to reduce power consumption dramatically and allowing a robust streaming connection to both earbuds.

Working prototypes were showcased at the MWC 4YFN exhibits, at the Fira Montjuic (Hall M8 Stand L2.9.) and shipping is scheduled for Q3 2019.  Early adopters can preorder at a discount rate for $79, which is 50% off the retail price.
www.mymanu.com
related items