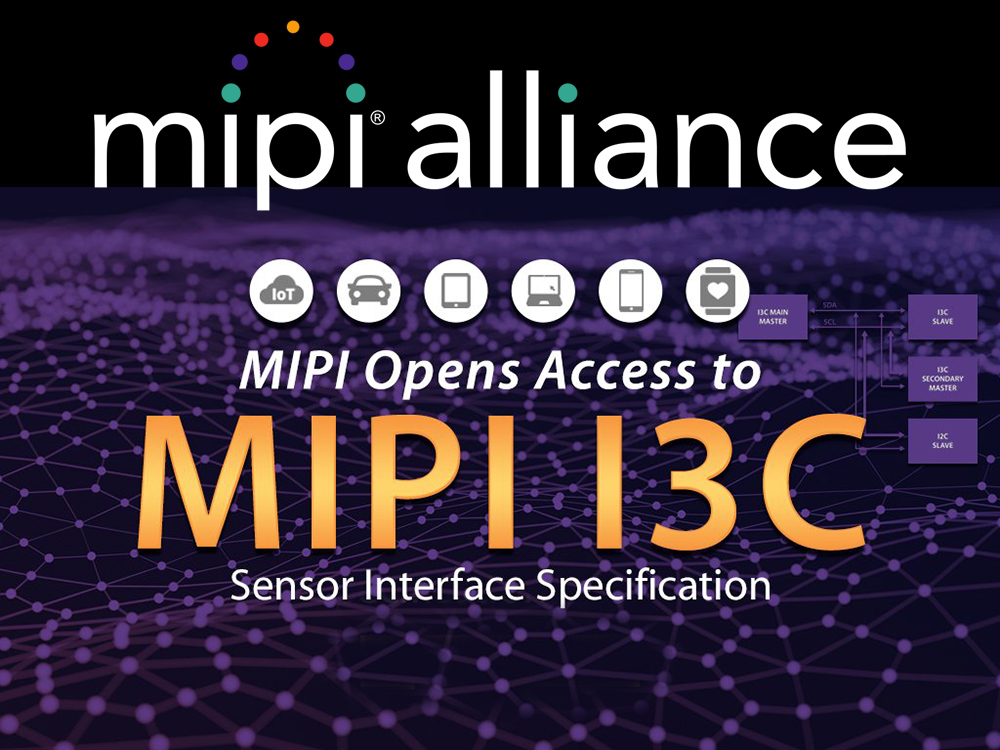 MIPI I3C is a serial communication interface specification that improves upon the features, performance, and power use of I2C, while maintaining backward compatibility for most devices. This will enable more design innovation for smartphones, wearables, automotive systems and all sorts of devices, with major implications in low-power mobile audio systems.

I3C was initially intended for mobile applications as a single interface that can be used for all digitally interfaced sensors. However, it is now intended for all mid-speed embedded and deeply embedded applications across sensors, actuators, power regulators, MCUs, FPGAs, etc. The interface is useful for other applications, as it offers high-speed data transfer at very low power levels while allowing multi-drop, which is highly desirable for any embedded system.

The power consumption per bit transfer in all I3C modes is more efficient than I2C, due to the use of push-pull (vs. open-drain) and strong pull-up signaling. Further, I3C can save considerable device power through higher data rates (because the device can be put back to sleep sooner), built-in configuration and control (without intruding on the main communication protocols), in-band interrupt (IBI) as a low-cost wake mechanism, and the ability for Slaves to shut down all internal clocks while still operating correctly on the I3C bus. I3C is currently in the early stages of adoption in products, and a few companies already offer I3C IP blocks. Silicon devices with I3C are already available from some vendors, with many more coming throughout 2018. 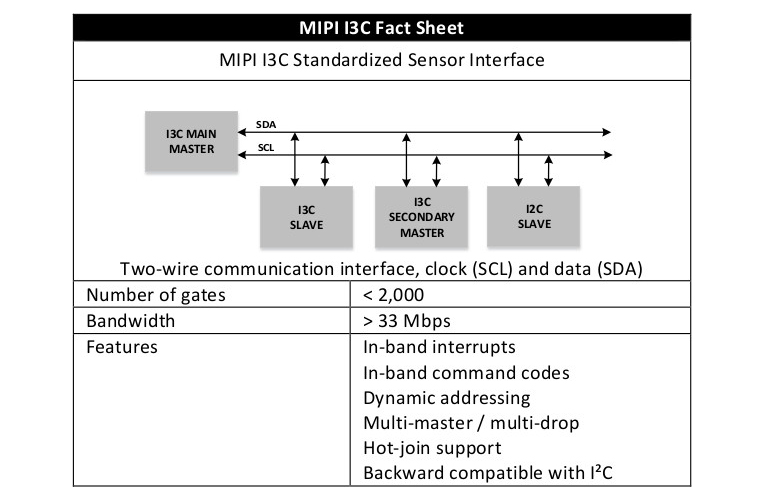 “MIPI I3C provides a welcome update to the I2C technology that has been widely adopted over the past 35 years. Extending access provides an opportunity to spur innovation and help other industries beyond mobile," says Joel Huloux, chairman of MIPI Alliance. "It helps MIPI members as well, because it supports greater adoption and interoperability, strengthens the ecosystem and provides for a richer development environment.”

To support companies that are considering using MIPI I3C in their designs, MIPI Alliance also recently published an extensive set of frequently asked questions (FAQs) about the specification. The FAQs, developed by the MIPI Alliance Sensor Working Group, provide a technical introduction to MIPI I3C along with guidelines for implementation and interoperability testing.

MIPI I3C, initially released to the MIPI Alliance member community in January 2017, streamlines and advances interface technologies that have been previously used in the sensor industry, such as I2C and SPI. The unified approach makes it easier to cost-effectively integrate multiple sensors from various vendors in a device to meet the increasing demand for sensor-enriched smartphones, wearables, Internet of Things (IoT) devices, AR/VR products and automotive systems. 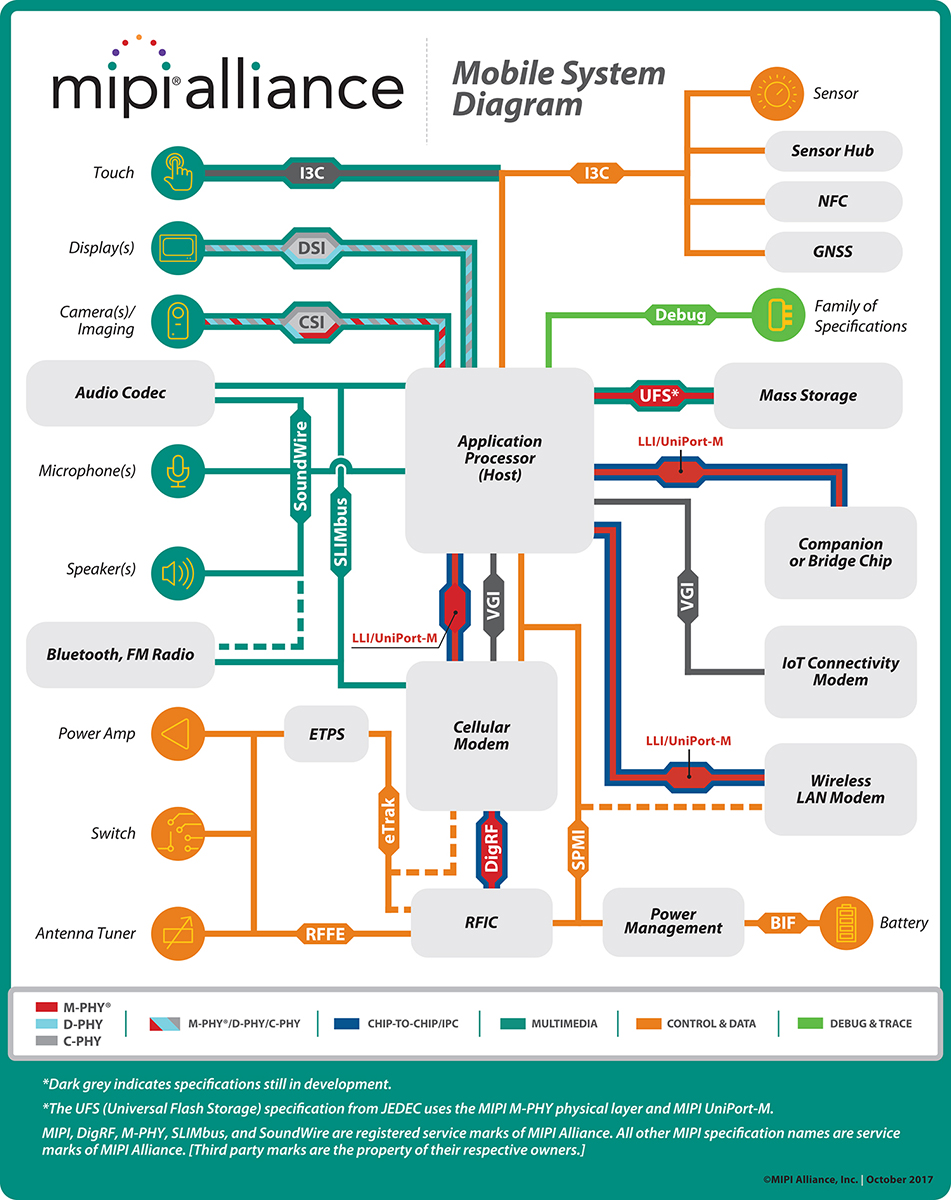 “Since its introduction, MIPI I3C has become a springboard for development activities within MIPI Alliance, extending the use cases and further enhancing its value to the developer community,” explains Ken Foust, chair of the MIPI Alliance Sensor Working Group. “We want to collaborate with developers in industry and academia on potential MIPI I3C applications and believe access to the specification will be a great help in these efforts.”

Organizations that view the specification are encouraged to join MIPI Alliance to realize all of the benefits that membership provides. Membership includes access to relevant patents and licenses, and opportunities to participate in specification development activities, interoperability workshops and other events.

The next MIPI I3C interoperability workshop will be held during the MIPI member meeting in Vancouver, BC, from March 12-16, 2018. Ken Foust, chair of the MIPI Alliance Sensor Working Group, will host a webinar, “A Developer’s Guide to MIPI I3C Implementation and MIPI I3C Beyond Sensors,” on February 7, 2018, at 11:00 am EST, 8:00 am PST. To register for the webinar, go to http://bit.ly/2kats6J.
For announcements of future workshops, visit https://mipi.org/events.

Resources available for download include the FAQs (“Frequently Asked Questions (FAQ) for MIPI I3CSM Version 1.0”; “A Developer’s Guide to MIPI I3CSM for Sensors and Beyond” presentation; and “MIPI Whitepaper: Introduction to the MIPI I3C Standardized Sensor Interface.”
www.mipi.org
related items