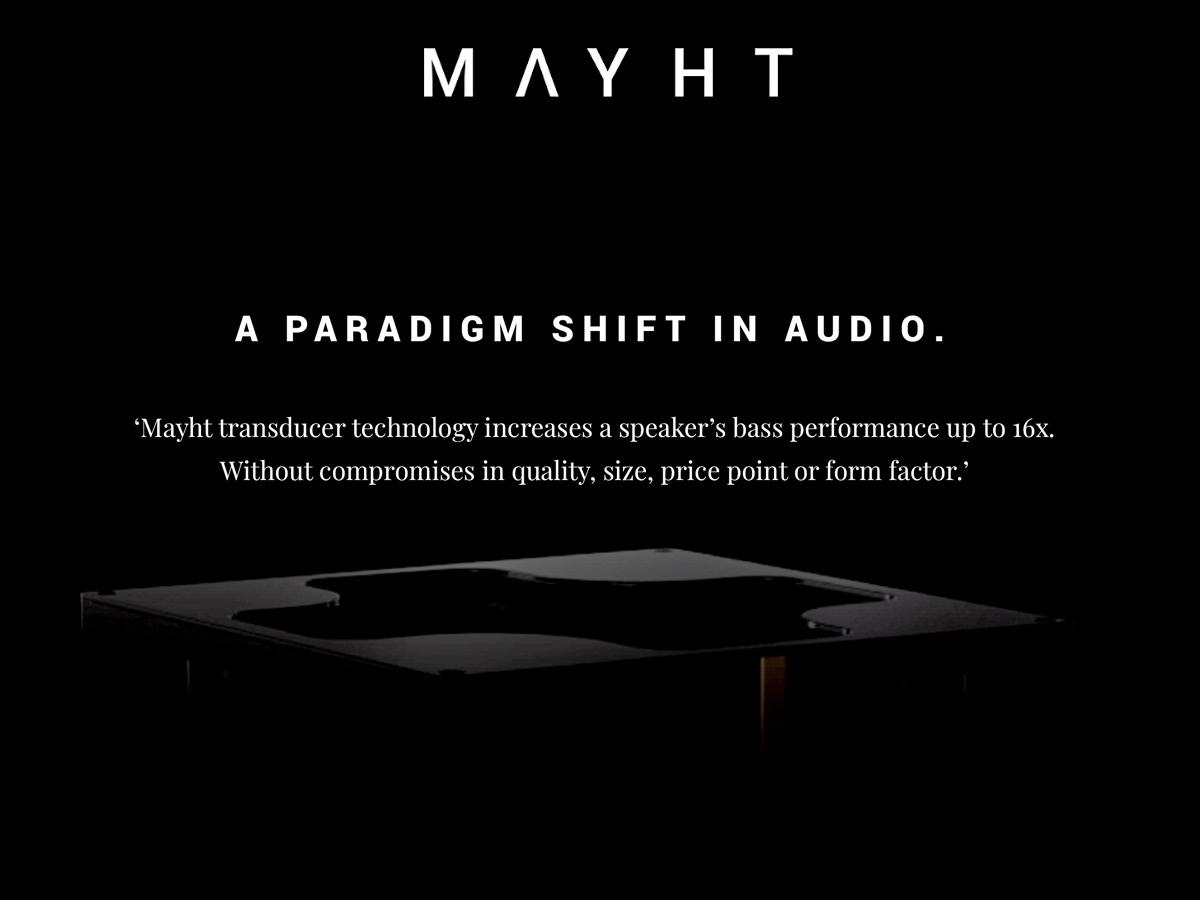 According to Mayht, the company's unique transducer technology increases a speaker’s bass performance up to 16x, without compromises in quality, size, price point or form factor. The interest in developing and designing speakers and transducers is born out of a passion for sound and conquering challenges that inspired its founders, Mattias Scheek (CEO), Timothy Scheek (CTO and main inventor), and Max Van Den Berg (CCO).

The company is looking to apply their new transducer designs in high-growth areas such as flat TVs, portable speakers, soundbars and even portable PA and musical instrument systems. The formula consists in reducing the size of a full-range driver that is also able to generate more bass. And for that, Mayht says they are completely re-inventing the core of the driver – which has remained unchanged for at least 75 years.

The technologies inside the Mayht driver are the result of extensive research over several years, starting with the design of a new motor, suspension and membrane architecture. After hundreds of simulations, thousands of prototypes and a lot of testing, the portfolio currently consists of 6 patents, all necessary to create the Mayht dual driver design. As they explain, every Mayht driver uses multiple motors, symmetrically distributed across the membrane, and allowing for a shallow design, keep sensitivity at the right level.

"The Mayht driver is a single driver with two membranes moving in opposing directions. This is the most efficient way to increase air displacement capability and prevent mechanical resonance of an enclosure. All the benefits of the dual opposing principal, without increasing depth by having to mount two drivers back-to-back," the company explains. Each driver enclosure also uses what they call Negative Compliance, in order to avoid the effect of air pressure working against the movement of the membranes.

"At maximum excursion, the membranes almost touch each other. Because of that, there is not any space for a conventional secondary suspension. The Mayht driver contains a distributed suspension technology for maximum control, reliability and linearity of movement. 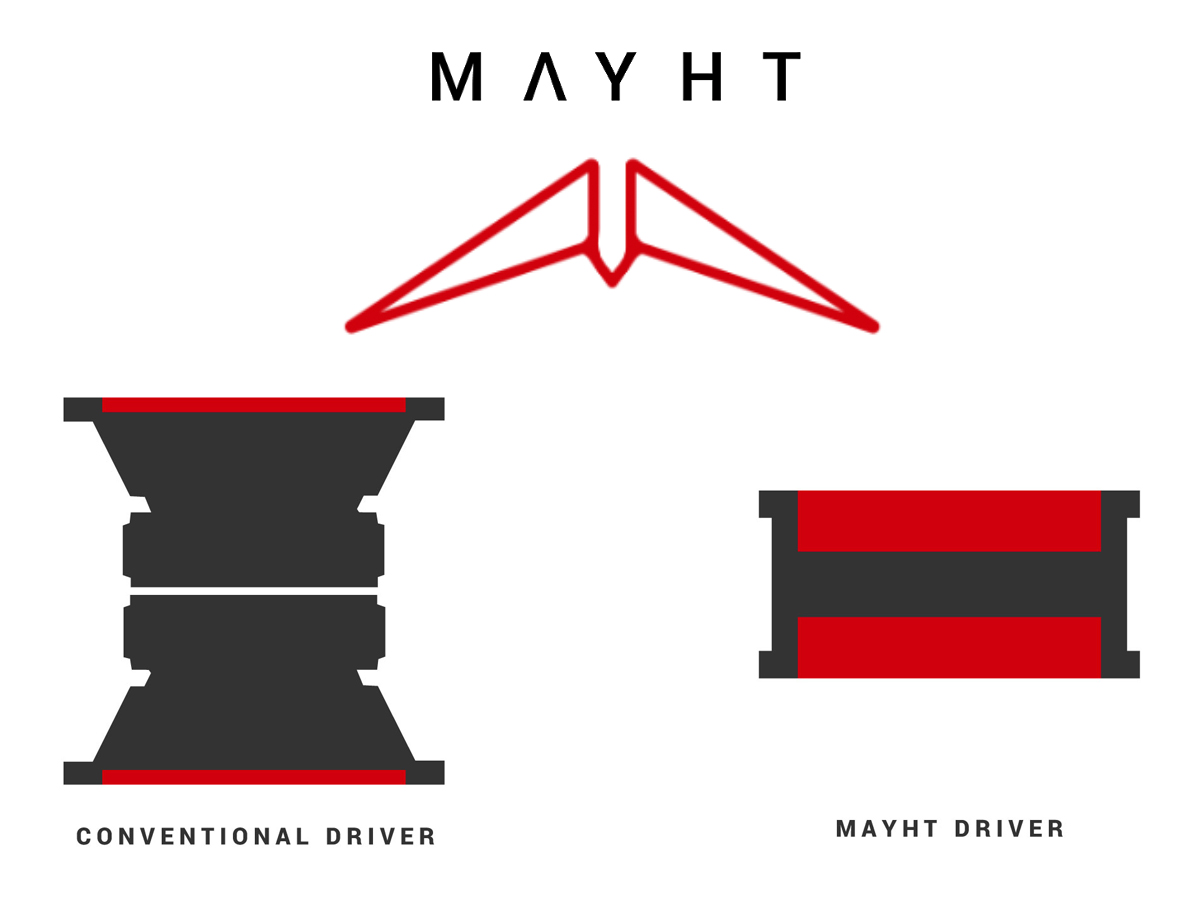 "Mayht technology can reach a 1:1.5 excursion-to-depth ratio because of it’s unique patented motor and membrane technology: one Mayht driver with two membranes fits in the size of a conventional driver which only has one membrane. Because the Mayht driver has two membranes, the total Sd is doubled, further increasing the maximum air displacement."

On the mechanical side the company also optimized the driver design for efficient production. "To connect the multiple motors as efficiently as possible, Mayht drivers contain a specifically designed part which is light weight and highly rigid. This part also makes it possible to reduce the assembly steps, allowing fast and cost effective manufacturing," they explain.

The story of the company started back in the year 2000. The two Scheek brothers, had been playing around with speakers as kids, had a high-end speaker company in their early twenties (Scheek Loudspeakers), and are now fulfilling their lifelong dream together with the Mayht team.

The idea for the new driver technology was born in 2015, with a custom speaker project. After having tried many different architectures and concepts, the first prototype showed that it was possible to make a speaker which was about 2.5 L in volume, with the sound of a 25 L speaker. It looked like something that could change the audio industry completely; depending on scalability and other industrial applicability factors. Because the potential of this technology was much broader than just high end speakers, they decided to establish a new company focused exclusively on driver technology.
A regional fund that invests in young companies in the proof-of-concept phase (UNIIQ), invested in Mayht in 2017. Early 2017, Max van den Berg – business development & strategy – invested in Mayht, and joined the team. Later that year, Job Koreman and Onno Steenhuis joined the engineering team. That same year the company moved from Amsterdam to Delft, grew their prototyping facilities, and came up with the MT1: a 30 mm wide ‘tablet sized’ speaker. Everyone that heard the speaker was immediately convinced that this was something completely new and interesting for many applications, and at the beginning of 2019, Mayht secured Series A Venture Capital funding from FORWARD.one.

“Our vision is that Mayht will become the new industry standard for speaker driver technology”, says Mattias Scheek. “With this follow-on investment, we are well-financed to revolutionize the sound experience globally. We are in the process of developing our Technology Platform which will bring optimal sound quality to any device in all verticals. We are in close contact with the world leading Tech- and Audio companies, and see their interest grow at every step that we take”.
www.mayht.com
related items