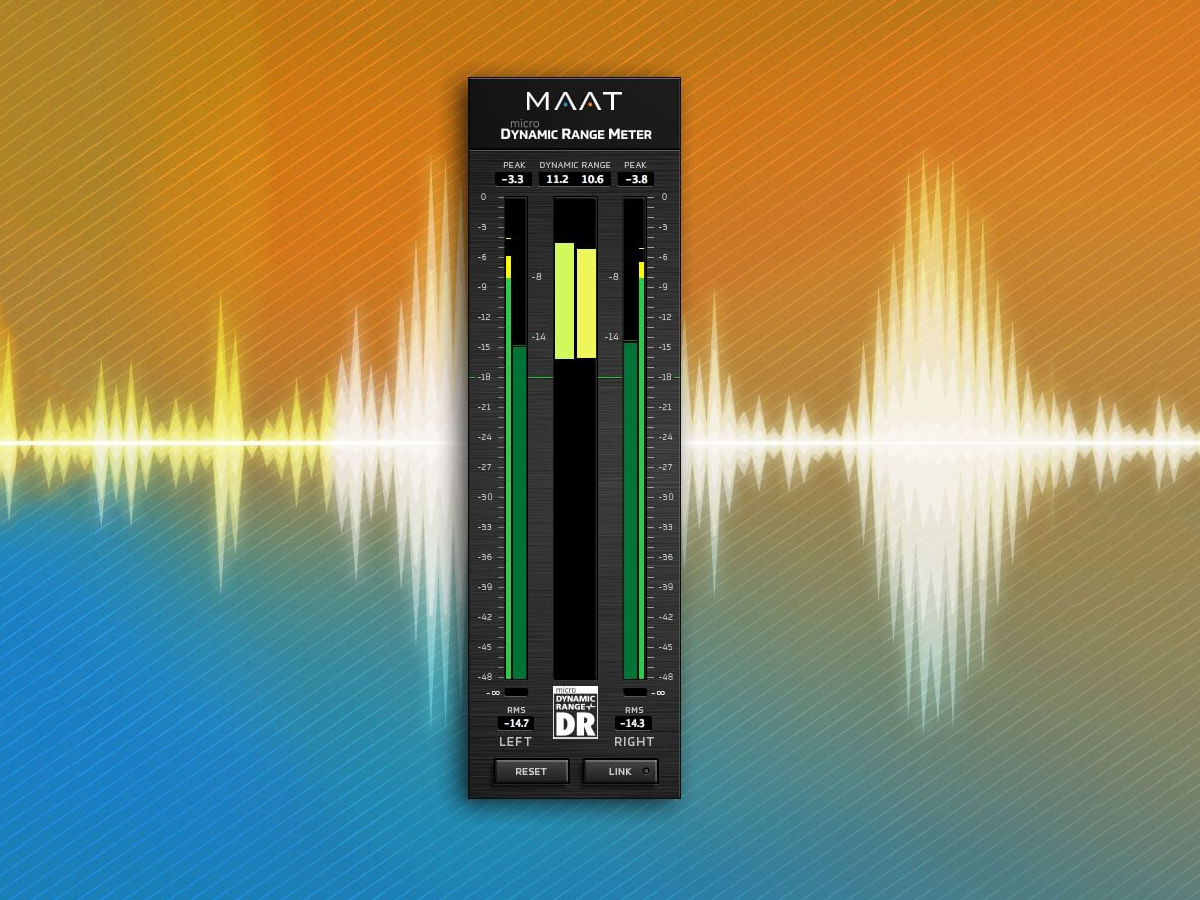 In 2009, Pleasurize Music Foundation launched the DR dynamic range of measurement systems, featuring an easy to understand, integer value representing the amount of dynamic range compression applied to music. The TT Dynamic Range Meter quickly became a favorite among both savvy pros and techie audiophiles. Now, MAAT Incorporated, has rebuilt the head end of the DR ecosystem, with the DRMeter realtime measurement plug-in and the companion tool, DROffline.
MAAT is derived from "Mastering Academy Audio Tools," reflecting the deep connection and practical wisdom derived from years of practical experience of its founder, Friedemann Tischmeyer, also one of the founders of the Pleasurize Music Foundation, inventor of the DR measurement system and president of MAAT. A renowned mastering engineer, Tischmeyer offers master classes for professional audio engineers and producers worldwide, and worked as a consultant to companies such as Antares, Apple, Arri, Presonus, Sony Music, Steinberg, and many more. In addition, Tischmeyer is a member of the ploud loudness expert committee of the European Broadcasting Union, and continues as president of the Pleasurize Music Foundation/USA.

MAAT's new DRMeter version 1.0 is a universal metering plug–in for stereo bus masters, and a faithful recreation of the legendary TT DR Meter for modern production environments, addressing an unfulfilled need for all engineers concerned with dynamic range issues.

Available for all major plug–in formats, including VST2/VST3 and AAX for macOS and Windows plus AU (Audio Units) for macOS, DRMeter offers two essential options for metering plus specialized measurement for dynamic range. DR is visually displayed as a real time bar meter plus corresponding numeric fields. Sample Peak Program and RMS amplitude are also shown as nested meters and numeric readouts.

DR is a de facto standard created to gauge the amount of dynamic range compression being applied to popular music. The broad adoption of the DR measurement system paved the way for the movement toward, and eventual adoption of, loudness control standards now in place worldwide. DRMeter’s measurement method conforms to the trusted standard first employed by the TT DR Meter. As its development team explains, "Its display algorithms follow MAAT’s guiding philosophy of careful attention to appearance and ballistics, achieving the best match between the aural impression heard by an engineer, and the optical rendering by the meters." 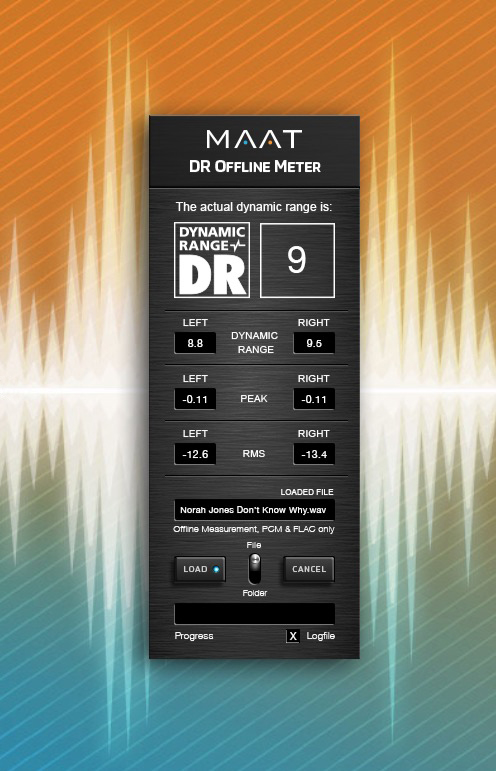 When used with the its companion DROffline utility, the DRMeter plug–in acts as a real time gauge of dynamic density, providing preflight checks during mixing and mastering. Offline, a song or entire album can be measured to generate an official DR value.

According to Friedemann Tischmeyer, the DR measurement system has inspired many thousands of music releases to be more enjoyable and emotional by preserving dynamics. “Back in 2007, we were at the peak of the loudness wars, and I remember that I was annoyed about receiving too many overly compressed and limited mixes. I thought, ‘Why don’t we have a simple integer number to describe relevant dynamic range?’ After two years and a lot of discussions and experimentation, the DR Meter was born. Creating an impact to inspire musicians, producers, and record companies for more dynamic music releases was a driving force, but I never expected such an overwhelming response and appreciation from the engineering community.”

The MAAT DRMeter was designed for daily mixing and mastering tasks, enabling fast, accurate and easy mix and mastering decisions. DRMeter allows fine tuning peak excursions, and properly setting a limiter with the fast and responsive peak meter bar, with an “Overs” alert to warn users. The adjacent RMS loudness bar graphs have more relaxed or damped ballistics, so users get a good sense of the perceptual loudness. This conveys a sense of proper level staging without overly hectic meter movement. The green -18 dBRMS tick mark indicates 0 LU. The DR bar graph can be operated as independent channels, or coupled for a summed left/right response, visually informing the user through a familiar “traffic light” green/yellow/red color coding scheme. The blue -∞ indicator informs the user if the DAW is delivering “digital black” or null AES data.

Complementing the new BS.1770 metering standards, including Loudness Range (LRA) designed to reflect the macro dynamics of broadband audio with a focus on broadcasting, the DR measurement system is essentially a dedicated tool for music production, with an algorithm that looks at the loudest 20% of the instantaneous signal, while LRA purposefully ignores the top 5% of a track’s dynamic deviation, making it unsuitable for the evaluation of the dynamics of music.

At only $35 USD, DRMeter is affordably priced and available now, exclusively at MAAT’s website. MAAT’s DROffline, the batch measurement companion application to the official DRMeter real time DR estimator plug-in is available for only $15 USD. 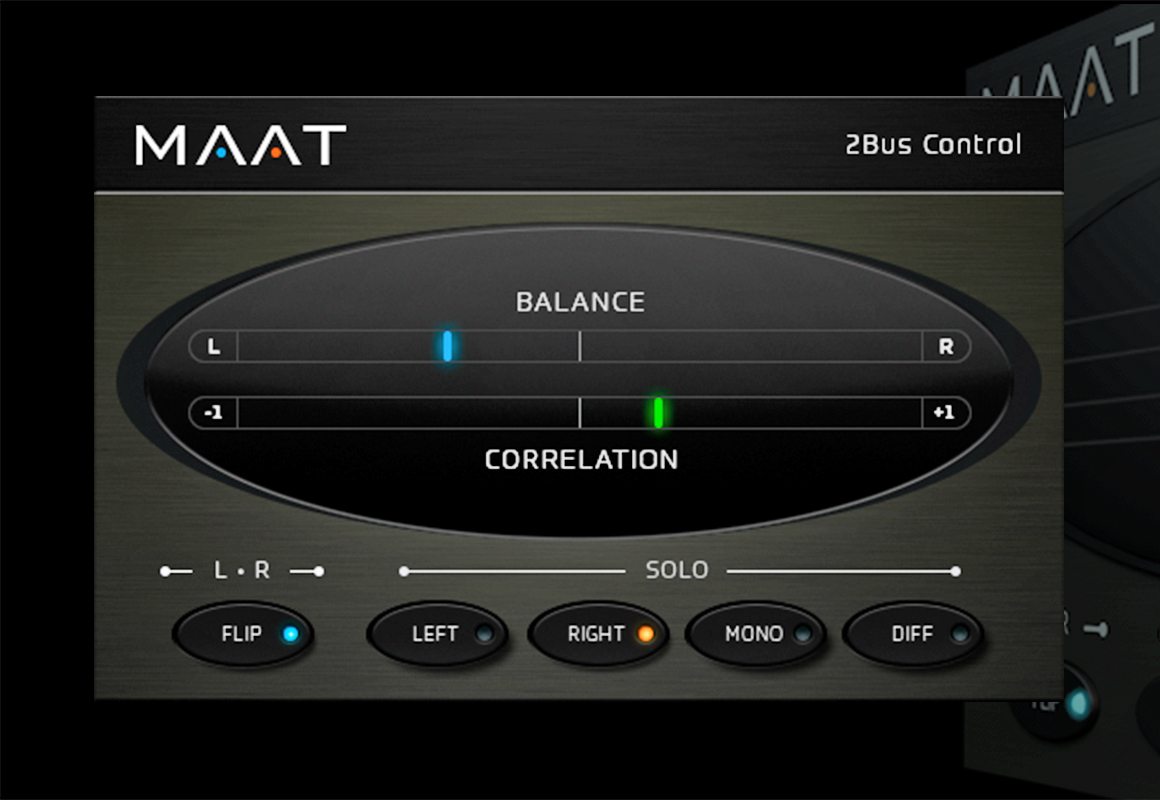 The only difference between the original and new DR meters is the removal of Correlation metering and the Mono Button. That was done, in response to user requests, to reduce UI height so the new DRMeter takes up less screen real estate. MAAT has implemented those functions in a free plug-in, the MAAT 2BusControl, which also includes solo buttons for L, R, MONO & DIFF, plus a left-right flip button and a useful Balance meter.
www.maat.digital/drmeter/
related items