audioXpress December 2016 is now ready to download. Our Standards Review article explains the fundamentals of the USB 3.1, USB Type-C, and Thunderbolt 3 specifications. We review four measurement microphones from PCB Piezotronics, the Mytek Digital Brooklyn DAC, the new miniDSP DDRC-24 processor, and we feature a Retro-Style High-Fidelity Preamplifier for DIY enthusiasts. This is an issue no one will want to miss. 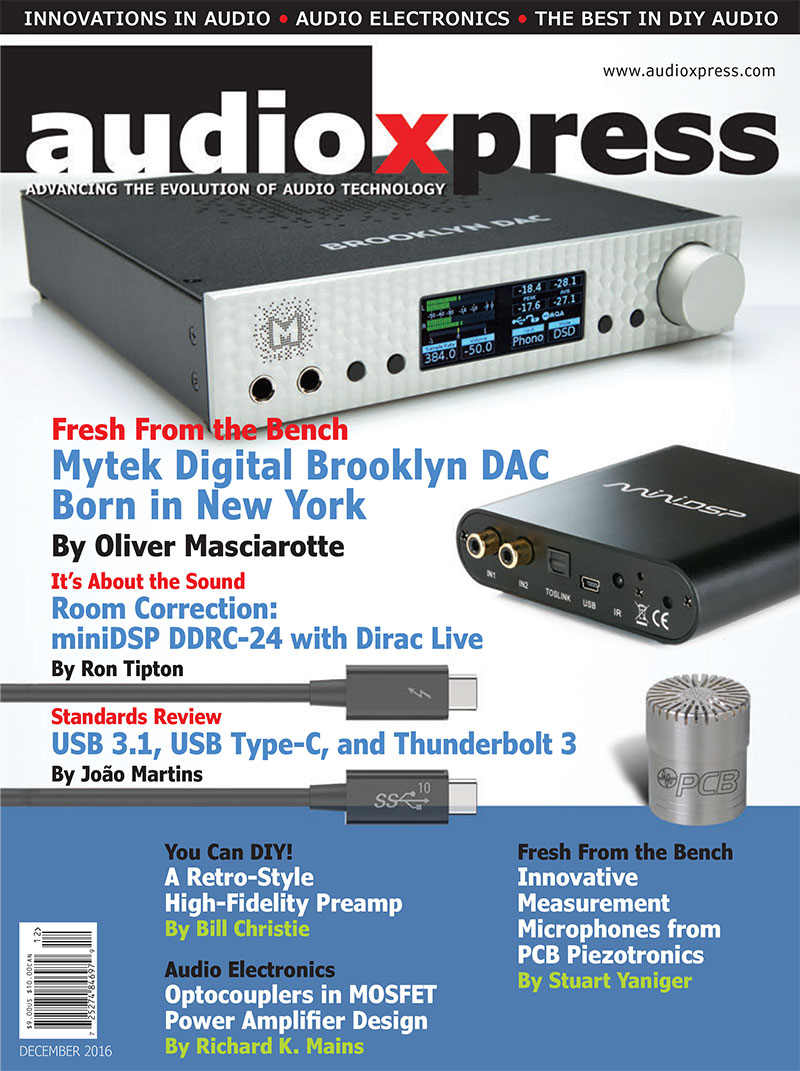 audioXpress December 2016 is now ready to download. This is an issue no one will want to miss.

The December 2016 issue signals the start of an important in-depth look at some of the technologies that will have the most impact on the audio industry in the next decade or more. In our Standards Review article, we look at USB 3.1, USB Type-C, and Thunderbolt 3 interfaces. In this first article, audioXpress provides an introduction to the new SuperSpeed USB 10 Gbps (USB 3.1 Gen 2) interface, and the new USB Type-C connector specification, including the recently published USB Audio Device Class 3.0 specification, which standardizes audio over USB Type-C. And because, we cannot discuss one without the other, we also cover the related Thunderbolt 3 technology. In this first part of the article series, we explain the updated specifications fundamentals, and the second article will explore how this will affect the audio industry.

Stuart Yaniger reviews a complete series of professional-grade measurement microphones from PCB Piezotronics, specifically, the 378A04 free-field microphone, the 378B02 free-field microphone, the 378A21 diffuse-field microphone, and the 130E20 array microphone, all using a current source rather than a voltage source, called ICP (ICP is a registered trademark of PCB Piezotronics and is a PCB sensor containing built-in electronics that can be powered by 2 to 20 mA of constant current power.) As Yaniger explains, “It’s well known that technologies designed for top-of-the-line equipment often migrate down and improve the performance of lower-cost products. What’s interesting is when the opposite occurs—a less complex and expensive technology is optimized to punch out of its weight class. In this case, it’s the upward migration of electret microphone technology to the hallowed halls where polarized condensers once ruled.”

Another review in this December issue features the Mytek Digital Brooklyn DAC Preamplifier and Headphone Amplifier, reviewed by Oliver A. Masciarotte. This highly anticipated DAC was the first in the market to support the new Master Quality Authenticated (MQA) technology that captures and delivers master quality audio in a file that’s small enough to stream or download. But Mytek Digital Brooklyn has so much more to it, starting with the fact that this mid-priced device is also capable of decoding all the modern formats and features all the necessary input and output options. Masciarotte tells the full story and puts it to the test.

And for those DIY enthusiasts who want to recover the flavor of a Retro-Style High-Fidelity Preamplifier, Bill Christie proposes a fully featured unit, with volume, balance, and tone controls. As Christie explains, “Having completed a phono preamplifier project that I was pleased with, I decided to build a full-featured preamplifier. To begin my preamplifier project, I had to choose a chip. During my search, I found that Texas Instruments provides a chip, the LM1036, which greatly simplifies the design. However, I decided to add several features to the basic design published in its datasheet. First, I incorporated the phono preamp. Next I added a derived center channel output by summing the right and left channels. This was a feature found on a Fisher preamplifier that I owned and found useful. And finally, I included an active crossover to provide a subwoofer output. I also provided switches to defeat the crossover.” To read, build, and enjoy!

Another excellent read - and certainly a reference article - comes from Richard K. Mains, who discusses the role of optocouplers in a MOSFET power amplifier design. The article presents a novel method of temperature compensation in audio power amplifiers that utilize MOSFETs as the output devices. The author discusses several advantages of using optocouplers to achieve temperature compensation and presents simulations using LTspice to illustrate the method.

And with the National Association of Music Merchants (NAMM) Show approaching, Richard Honeycutt decided to explore Tremolo Circuits in Guitar Amplifiers in his Hollow-State Electronics column. Read to understand the difference between tremolo and vibrato, and how these effects are created in hollow-state guitar amplifiers.

We also propose a read, reviewed by James Woods, who has unearthed a lost treasure from the past. Detailing a bygone era of early recordings, the book, Disk Recording 1930 to 1960: Equipment, Techniques, Recollections was written by Robert K. Morrison and was first published in 2003 as a bound version. Sadly, in the period following Morrison’s death, all unsold stock was lost or destroyed. His widow, Patricia, is the copyright holder and has given permission to reprint the book as a high-resolution PDF file on a CD-ROM. All proceeds benefit Patricia Morrison. 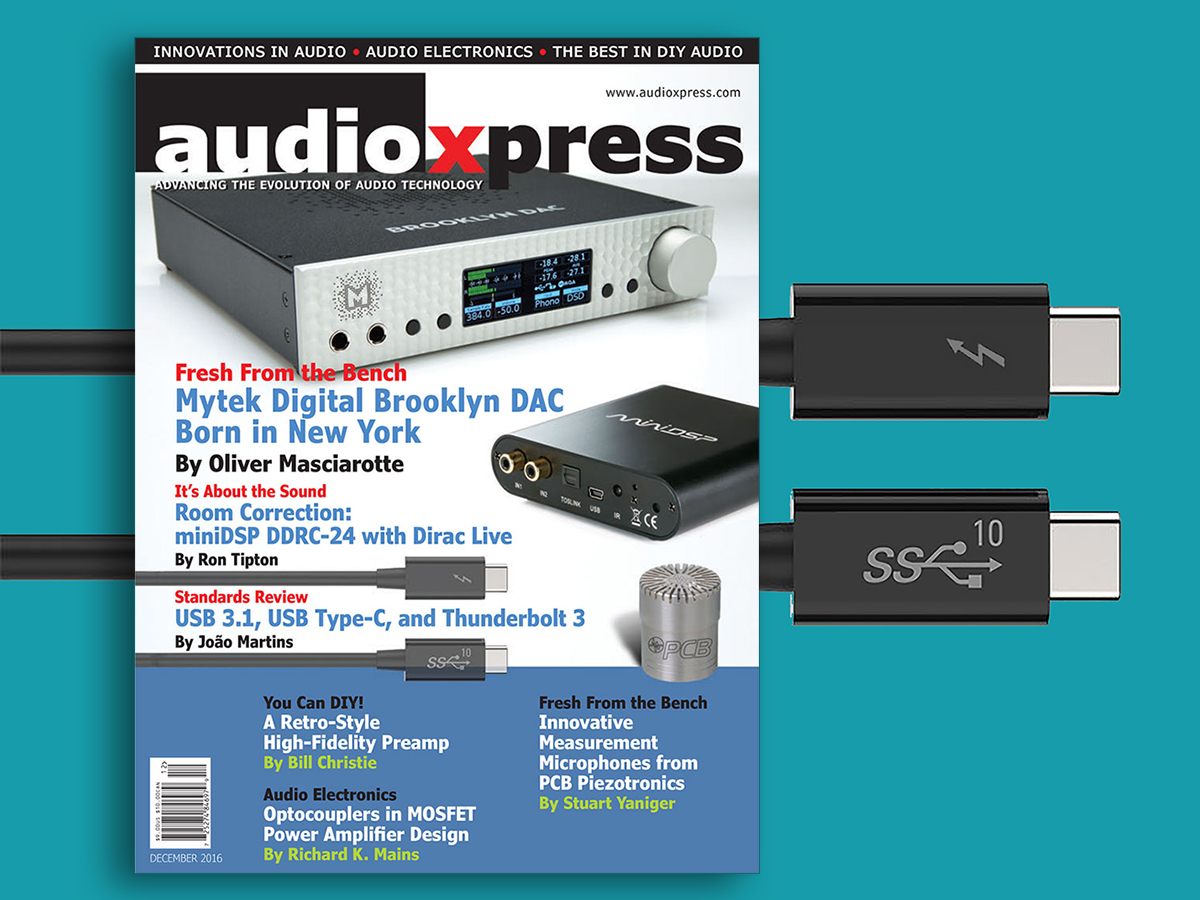 On Sound Control, Richard Honeycutt discusses “A Complementarity Principle in Acoustics,” in which he refers to the complementarity principle in physics that “a complete knowledge of phenomena on atomic dimensions requires a description of both wave and particle properties.” See how it valuably applies to the acoustic domain.

All this and more, now available on the December 2016 edition. Access and download this edition now: www.gotomyxpress.com

Of course you can also subscribe here: www.audioxpress.com/page/audioXpress-Subscription-Services.html
And you can also buy a single printed issue or the complete audioXpress issue archive on USB at www.cc-webshop.com
related items