Get Ready for What’s Coming with audioXpress January 2017!

audioXpress January 2017 is now available. This month, we review Kii Audio’s new Kii Three speakers, and report on the most interesting new products at The Rocky Mountain Audio Fest (RMAF) 2016. We explore Near Field Magnetic Induction (NFMI) wireless audio applications, and the new USB Audio Device Class 3.0 specification for USB Type-C. We discuss streaming DSD over the Internet, revisit the Helmholtz resonator, explain how to build a Low-Power, Class-A Power Amplifier, and interview Michael Carnes of Exponential Audio. There is a lot to read inside this issue! 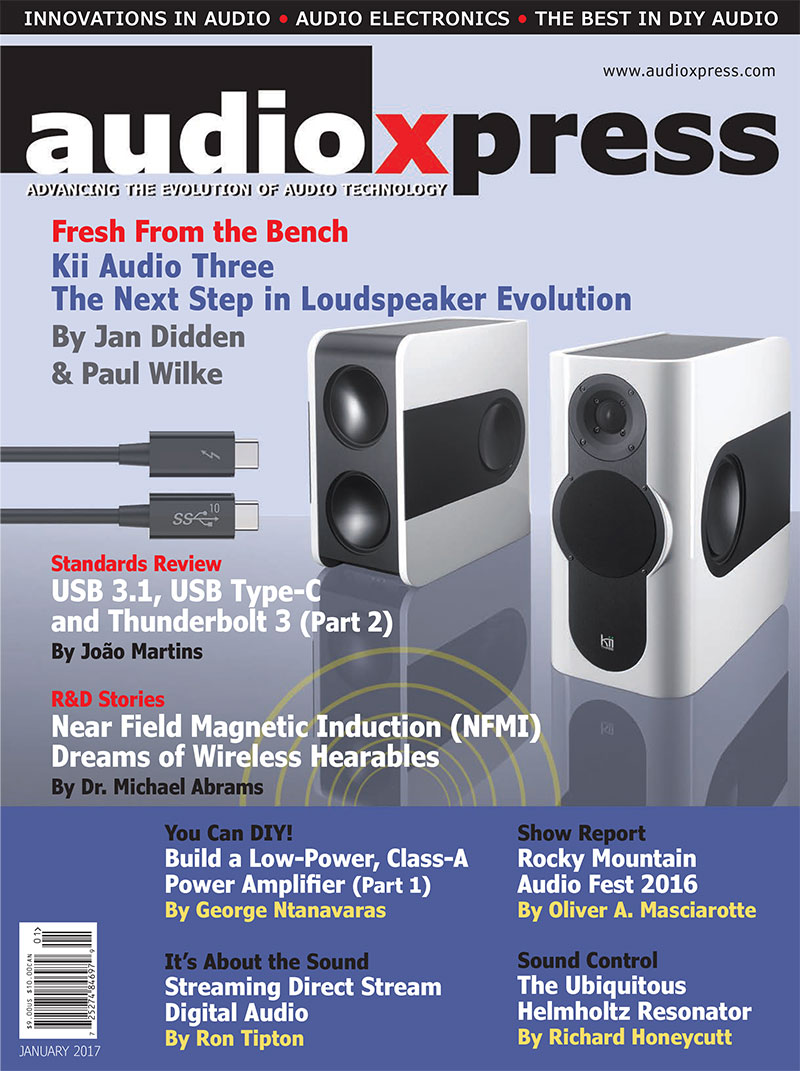 audioXpress January 2017 is now ready to download and on its way to print subscribers. Inside this issue, there is a lot to read as you head to CES 2017 in Las Vegas, NV.

On the cover, audioXpress highlights the much-anticipated review of the brand new Kii Three speakers from the company everyone’s watching, Kii Audio. “The Next Step in Loudspeaker Evolution,” as Jan Didden and Paul Wilke titled their review, examines whether the Kii Threes are effectively “the most advanced loudspeaker on the market today,” as is claimed by Kii Audio. The Kii Three is the latest design by Bruno Putzeys, CTO of Kii Audio GmbH, who teamed up with a group of experts that included DSP specialist Bart van der Laan. Putzeys is known as the designer of the nCore series of Class-D amplifiers, and the excellent Grimm LS1 speaker. The Kii Three, however, is so different that it may be the beginning of an entirely new class of loudspeakers: Those that actively control directivity at the low end.

Focusing on the technical aspects of the loudspeaker first and foremost, speaker expert Paul Wilke looks at all the details in the design, while audioXpress’ technical editor Jan Didden provides the listening impressions, after living with the Kii Three for a week. Together, they tested the Kii Three during a measurement session in the anechoic chamber of the Technical University in Delft in The Netherlands, to substantiate their impressions. Learn what they discovered this edition.

And because our team is on its way to ALMA’s International Symposium and Expo 2017, immediately followed by CES in Las Vegas, we are pleased to feature an opinion piece regarding Near Field Magnetic Induction - “Dreams of Wireless Hearables” by Dr. Michael Abrams. While discussing the challenges of designing new “truly” wireless earbuds, which is an ongoing topic on the audioXpress website, we found multiple references to NFMI complementing Bluetooth. One of the leading names in NFMI is FreeLinc Technologies, a research and development company focused on the adoption of this technology as a new wireless standard in the Public Safety, Military, Healthcare, and Consumer markets. For this issue, audioXpress invited Dr. Michael Abrams, FreeLinc’s Chief Executive Officer, to share his valuable perspective about the role of NFMI in wireless audio applications.

Abrams believes that we need a growing ecosystem of technologies and that the just-released Bluetooth 5 specification might hold some, but not all of the answers. NXP has been exploring the combination of Bluetooth and NFC to respond exactly to the same problems that NFMI, being a truly Wireless Personal Area Network (WPAN) already solves. In his article, Abrams explains why and how a combination of those technologies could be a great idea.

In this edition, you will also find Oliver A. Masciarotte’s personal perspective as he explores the most interesting new products at The Rocky Mountain Audio Fest (RMAF) 2016. In his Show Report from Denver, CO, Masciarotte finds headphones and earbuds, wired and wireless solutions, new digital players, DACs, amplifiers, speakers and much more.

audioXpress concludes its two-part feature about USB 3.1, USB Type-C, and Thunderbolt 3, in its Standards Review column. Following our introduction to the fundamentals of the new SuperSpeed USB 10 Gbps (USB 3.1 Gen 2) specification, the new USB Type-C interface specification, and Thunderbolt 3 technology in the December 2016 issue of audioXpress, we will now examine how these technologies have evolved and how they work together. We also look at the USB Audio Device Class 3.0 specification, which standardizes audio over USB Type-C and its implications on audio.

For those who want to combine the latest technologies with the highest audio quality experiences, Ron Tipton initiates a new adventure that we are certain our readers will enjoy. In the first article in a series about Streaming Music Experiences, Tipton tries to discover how good streaming music services can be, starting with the highest quality available, streaming Direct Stream Digital (DSD) audio. The new series attempts to determine if we really are able to enjoy the best sound reproduction using music that’s streamed over the Internet given the bandwidth restrictions and variable data rates, considering that even high-resolution audio (HRA) will eventually transition from downloads to streaming as well. Nothing is more challenging than streaming DSD. But as Tipton discovered, in early 2016, two concerts were hosted by Blue Coast Records (BCR), streamed live and recorded in native DSD. And both are available for on-demand streaming for a limited time. So he listened and shares his experience.

For those following our column devoted to everything acoustics - Sound Control - sponsored by Acoustic Sciences Corp. - Richard Honeycutt writes about “The Ubiquitous Helmholtz Resonator.” As he explains, most people who have been around acoustics or acousticians have heard of the Helmholtz resonator. In this article, he discusses the extraordinary scientist for whom this device is named - Hermann Ludwig Ferdinand von Helmholtz (1821–1894) - and examines how the resonator works as well as its uses.

And for the best in DIY, George Ntanavaras explains how to “Build a Low-Power, Class-A Power Amplifier.” In this first article, he lays the groundwork for the project, based on a design by J. L. Linsley-Hood with a lower level voltage supply because he wanted to have lower power output. As Ntanavaras details, “I decided to experiment with my home stereo system after wondering if I would notice any improvements by driving the loudspeakers with a Class-A amplifier.” This first article of two-parts details the project’s objectives and design for the amplifier’s construction. 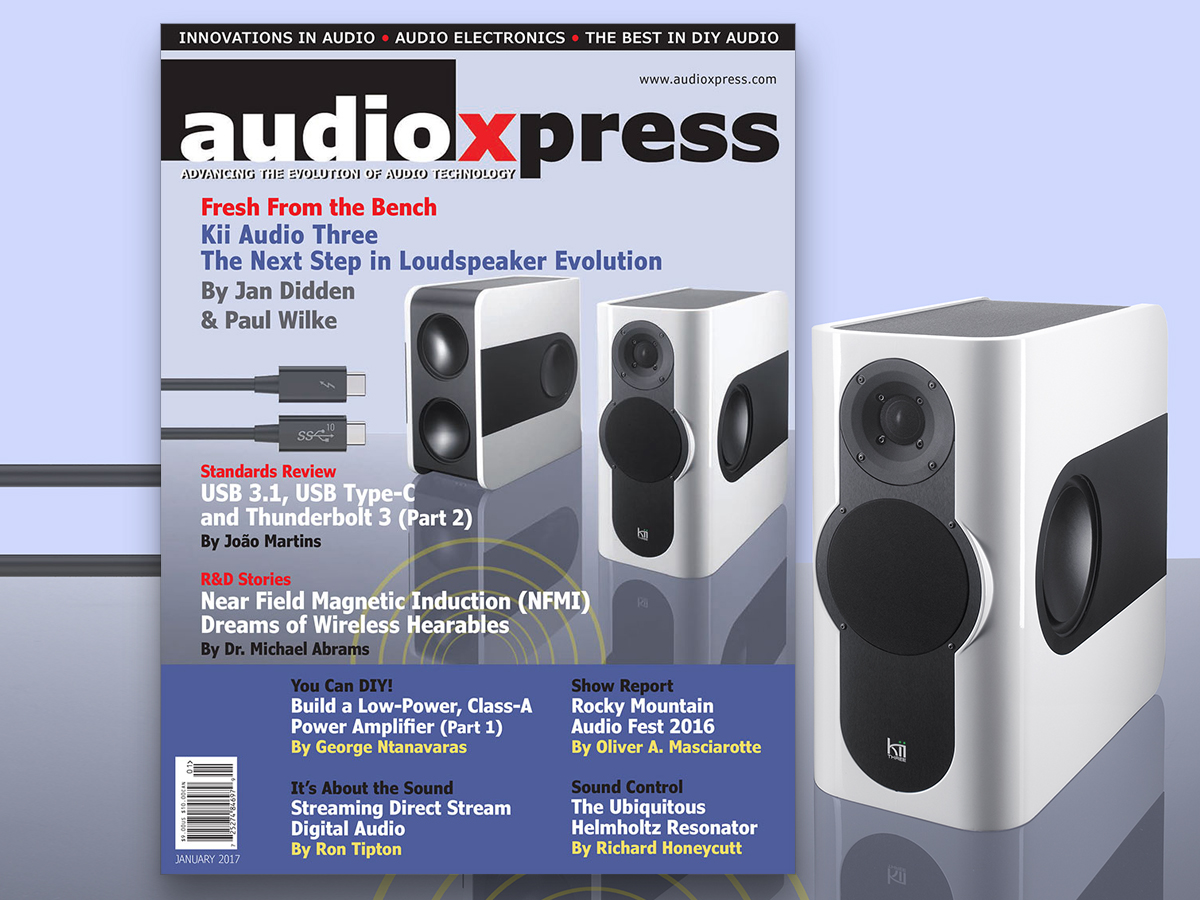 Our monthly interview with some of the best entrepreneurs and audio innovators features Michael Carnes of Exponential Audio, a software business devoted - until now - to the best possible professional reverberation plug-ins. In “Coding New Frontiers in Reverb,” Shannon Becker interviews a long-time software developer and musician, who founded Exponential Audio in 2012 and was previously responsible for some of Lexicon’s own plug-in versions of its famous studio reverb hardware units.

Of course you can also subscribe here: www.audioxpress.com/page/audioXpress-Subscription-Services.html
And you can also buy a single printed issue or the complete audioXpress issue archive on USB at www.cc-webshop.com
related items