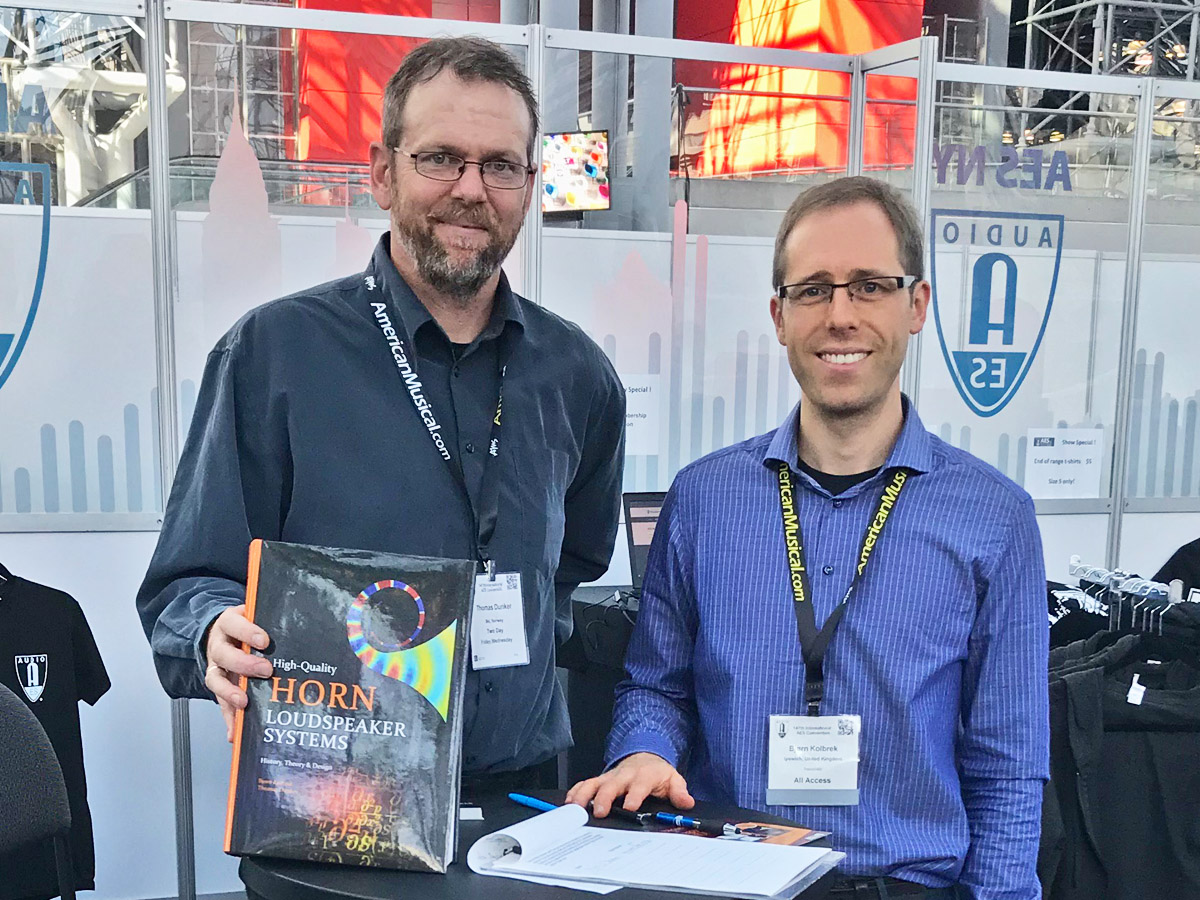 During the AES convention, the authors, Bjørn Kolbrek and Thomas Dunker presented a session on the two Western Electric compression drivers that marked the beginning of modern compression driver design. The presentation, titled "Compression Driver DNA - Origin and Seeds of Progress" was well received and summarized some pre-history and history of the W.E. 555 and 594 drivers and presented some previously unseen documents from experimental work on these devices at the Bell Telephone Labs.

As the two authors, both native Norwegians, explained at the presentation event, the book is "self published" and it is the work of an extensive research, spanning many years. To promote the contents and interact with readers, an information website was launched and already contains updates about distribution and extensive background information on the research and writing of the book, being intended for future supplemental and supportive resources.

Bjørn Kolbrek, Ph.D, doctored in 2016 at the NTNU in Trondheim, Norway with his dissertation "Extensions to the Mode Matching Method for Horn Loudspeaker Simulation." He has published several papers related to horn speakers, and before his academic studies he was an R&D engineer working on electronic control systems for marine machinery in a Norwegian company. Bjørn was employed by Celestion in the UK before finally doctoring at the NTNU and since then as worked on horn simulation software development. Bjørn sorts out the math and the heaviest theory and has written the theory sections of the book.

Thomas Dunker is an audio enthusiast known by some to have operated a web page on horn speakers in the mid 1990s. While the web page was unfortunately a bit short lived, the interest in horn speakers never waned, and experiments and research continued as life's twists and turns permitted. Like Bjørn, Thomas is also a passionate audio experimenter and DIY'er, and has remained an "amateur" in the true sense of the word, but still has studied the subject of horn speakers for more than 25 years on and off. The history writing in the book has been his main contribution to the manuscripts in terms of text, but Bjørn has also contributed enormously to the history parts. 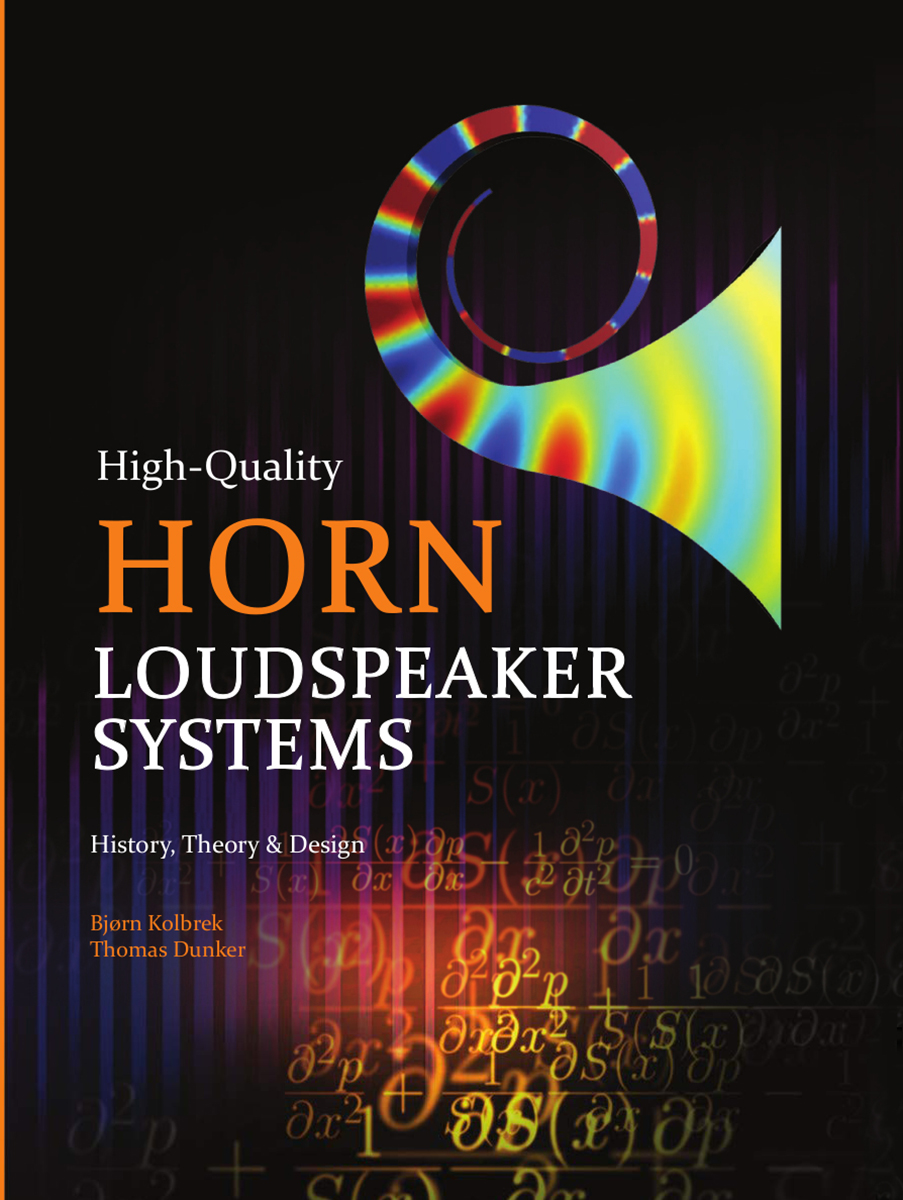 "The two of us got to know each other by e-mail in 2004 and have collaborated on horn speaker research ever since, having found that we were both looking for answers to some of the same questions and both having studied the theory of horn speakers for some time and collecting literature. The idea to write a book was something of a no-brainer after a while, as the collection of papers mounted and we were getting progressively deeper into the matter. It seemed the obvious way to organize our material and turn it into a comprehensive summary of our studies, for easier lookup - and to share it with fellow enthusiasts, while filling a gap in every audio technology library. We were not so sure how voluminous it would end up, but were not surprised to end up around 1000 pages as we ultimately did. Our collaboration and countless discussions over the years have shaped the outcome of the project in many ways as we together bit into vast amounts of knowledge and information spanning more than a century."

“High-Quality Horn Loudspeaker Systems" is the first comprehensive book devoted entirely to horn loudspeakers, covering more than a century of developments in engineering, theory and industrial applications of the technology. The book contains thousands of photos, diagrams and graphs and is intended to be a "one-stop reference" work and an extensive guide to the subject. It is the practical result of the author's 25 years of time consuming and challenging research to locate and collect literature on horns and horn speakers, some of it dating back as much as a century and includes information never digitized before, including documentation on horn speaker developments in the 1920-1940 period. 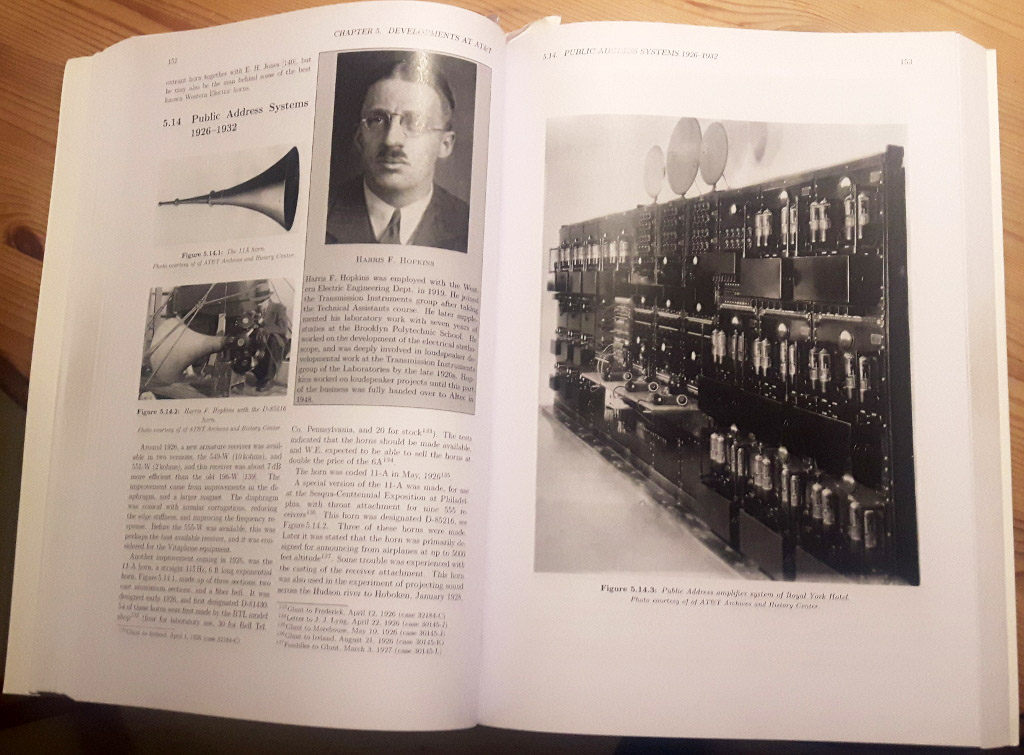 The complete table of contents - 17 pages - for "High-Quality Horn Loudspeaker Systems" is available online in the dedicated website and provides an idea of the extensive number of topics covered, including the theory part of the book, which - as the authors admit - could have been a book in its own right. The book contains extensive bibliographies, footnotes and cross references and is intended to be studied and accessed as a whole. "We have been committed to write the kind of book about horn speakers that we ourselves have always wished would exist," the authors acknowledge.

"2019 also marks the centennial anniversary of the publishing of A.G. Webster's horn theory "Acoustic Impedance and the Theory of Horns and of the Phonograph" that got the ball rolling making this technology a truly scientific subject a hundred years ago," they add.

The first edition of the book is limited to 1000 copies and will sell for USD $150, available only in hardcover, with a quality sewn binding and printed on silk finish paper, 1070 pages, richly illustrated. A true treasure trove of information and knowledge.
http://hornspeakersystems.info
related items