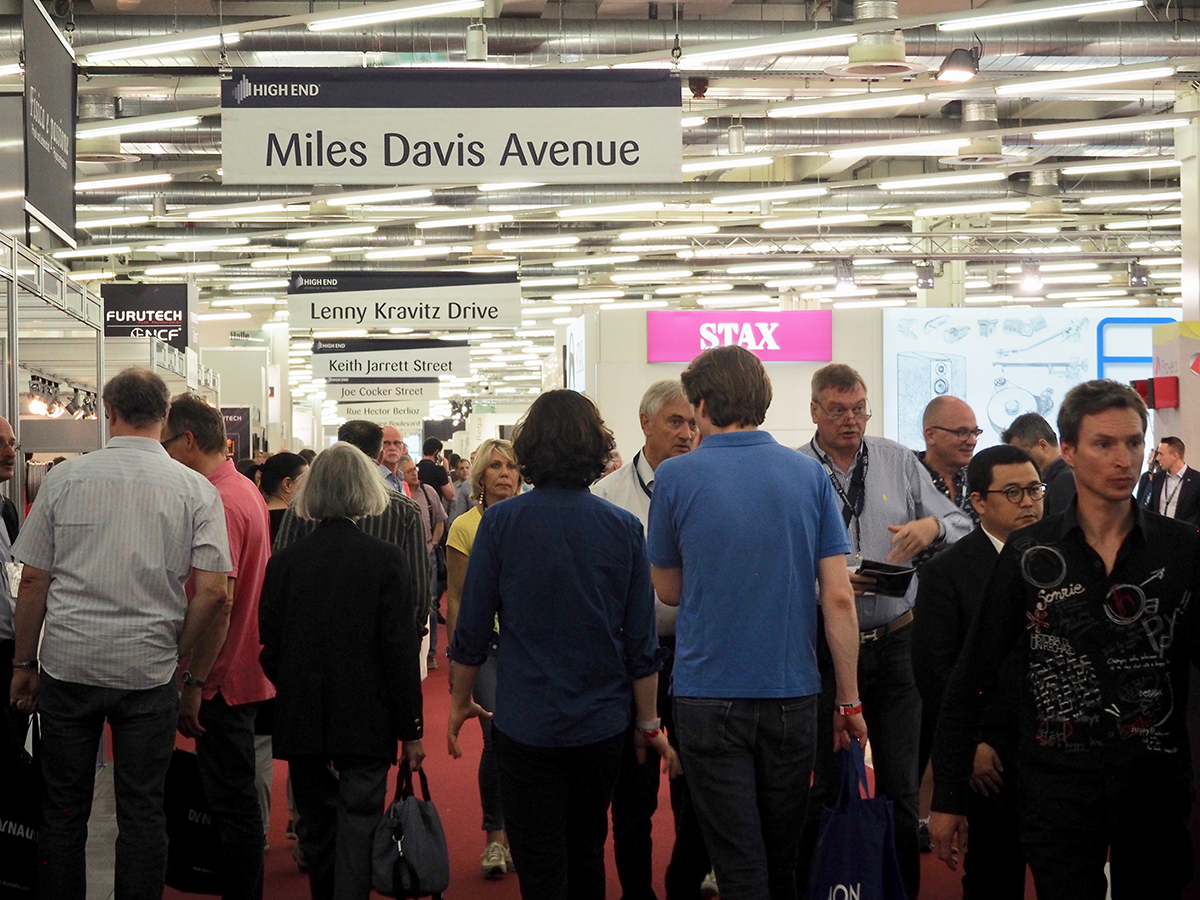 The 36th consecutive staging of the High End Munich show was once again a worldwide highlight for the entire industry. From May 18-21, the exhibition halls and rooms encircling the atriums on the upper levels of the MOC were booked solid, and the crowd of visitors was accordingly vast. The exhibition delighted some 21,000 visitors, arriving from all over the world to find out about products and trends in the audio industry.

On Thursday, under sunny skies, the High End opened its doors for the trade visitors, hundreds of whom had gathered in front of the admission gates. This year, the exhibition was not scheduled to start on the usual public holiday of Corpus Christi, and while on Thursday and Friday, the High End experienced slight decreases in visitor statistics, the following days, Saturday and Sunday, saw all the more visitor traffic. The day with the highest number of visitors was Saturday: achieving a growth of 30% over the last year. 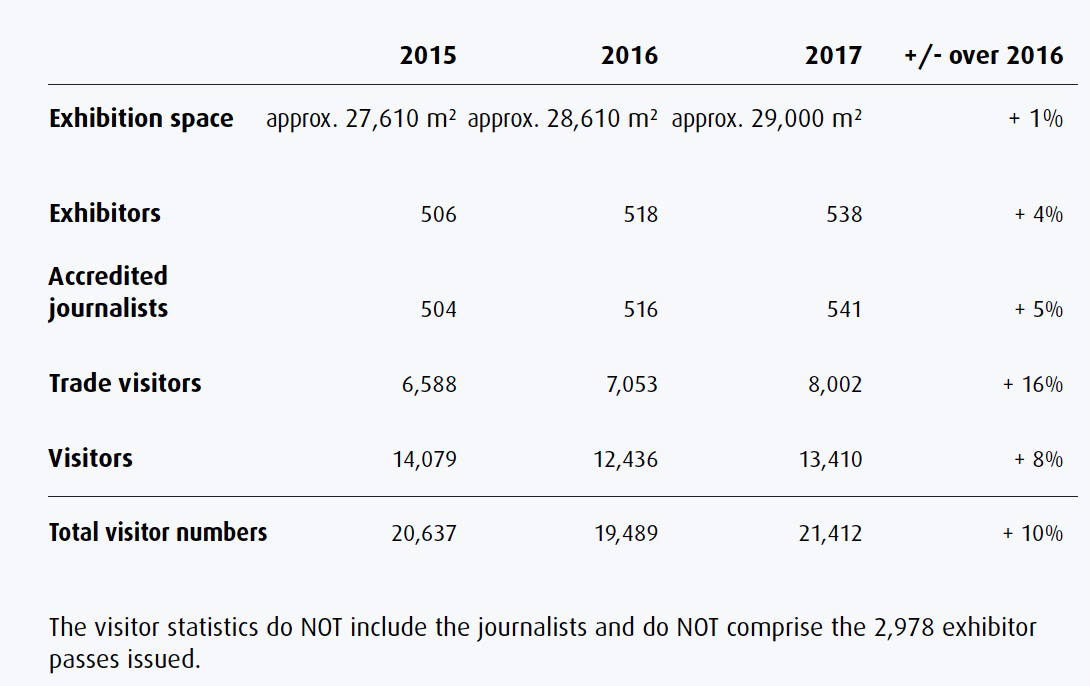 538 exhibitors, 63% of whom were international, presented a broad range of products. Sparing no effort and expense, the exhibitors succeeded in turning the individual areas, stands and rooms into very individual acoustic and visual gems. “The major effort expended on the part of many exhibitors deserves our great respect and our appreciation. All the efforts on the part of exhibitors achieved the goal of creating a proper setting for the products in our industry”, according to Stefan Dreischärf (Managing Director of the High End Society).

Compared to the previous year, the number of companies exhibiting increased by some 4%. They came from 44 different countries, not only from within but also from outside of Europe, and from North and South America, Asia and the region of Asia-Pacific. On the international level, the countries most strongly represented were the United States, United Kingdom, Italy, France, Switzerland, Denmark, China, Japan, the Netherlands,
Canada and Taiwan.

"This is where manufacturers, importers, sales organizations and dealers from all over the world come together. It is a testimony to the tremendous significance and the popularity the High End enjoys within the audio industry. Without a doubt, it has now become an indispensable forum for the entire industry and a ‘must’ for anyone involved in this sector”, confirmed Kurt Hecker (Chairman of the Board of the High End Society). 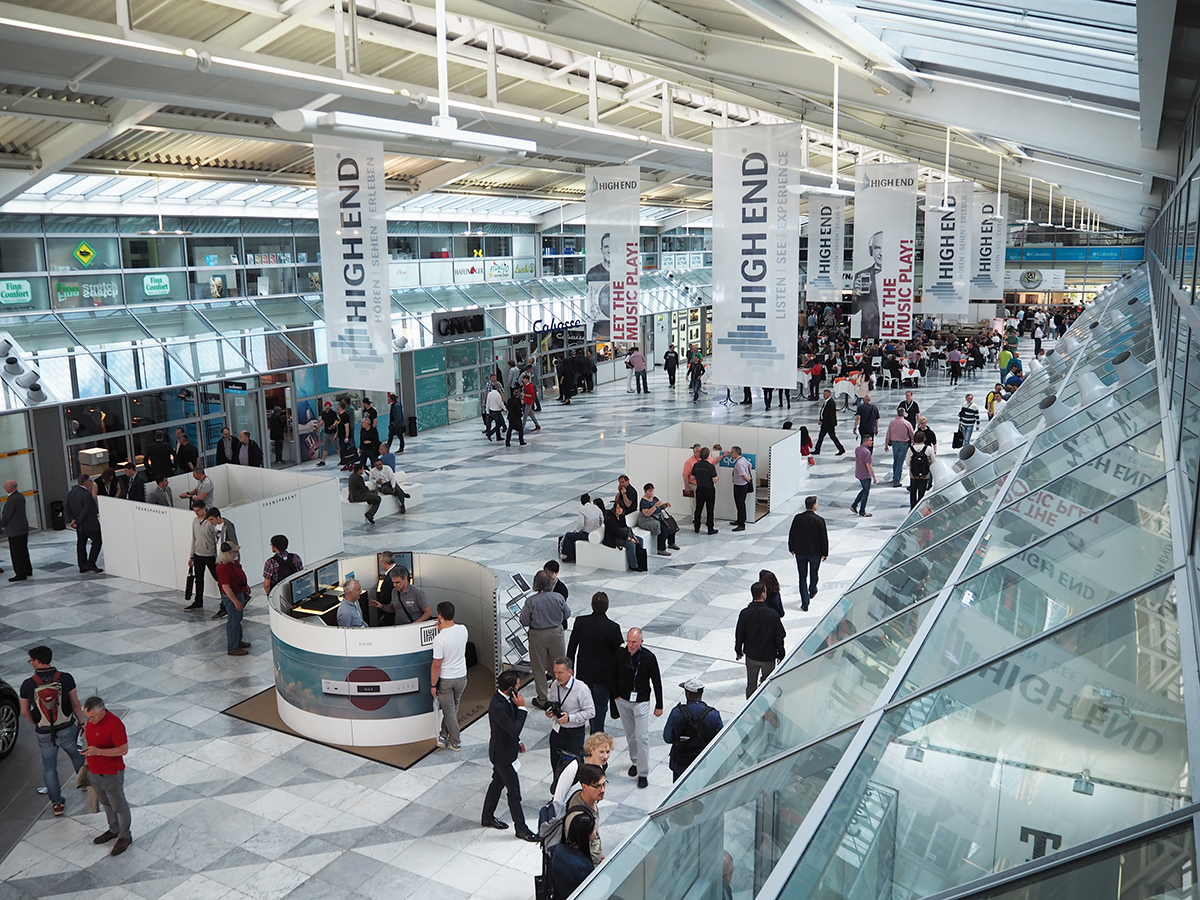 The complete product range of the audio sector was showcased in 4 exhibition halls and 2 atriums with 138 adjacent demonstration rooms. Beginning with purist, strictly analog music systems with vinyl and glowing cathode ray tubes, right down to modern Bluetooth and streaming solutions, networked and wireless products, as well as sound bars and headphones.

Virtually all the exhibitors were pleased with a well-informed and avidly interested public. With 541 accredited journalists from around the world, the High End was also able to reach a new record in media numbers. The national and international trade and daily media, television and radio broadcasters carried the message of high-quality music reproduction and the presence of the High End exhibition throughout the world. One out of two journalists who came to Munich was from abroad. “The level of awareness of the HIGH END has continued to grow not only within Germany but also internationally. We are pleased with the exhibition’s worldwide media attraction”, emphasized Deputy Managing Director of the High End Society, Mansour Mamaghani.

In addition to the wide array of innovative products, once again this year, numerous music presentations were celebrated by the exhibitors with great enthusiasm and high product quality. The High End offered not only its usual high level of information but also a distinctive entertainment value for participants and visitors. The technology stage, as a free information forum, was heavily frequented again this year. Among other innovations, there was a preview of the sound recording and broadcasting standards of tomorrow, information on the configuration and expansion of a music system built around a music server and presentation of a record player concept without a turntable. 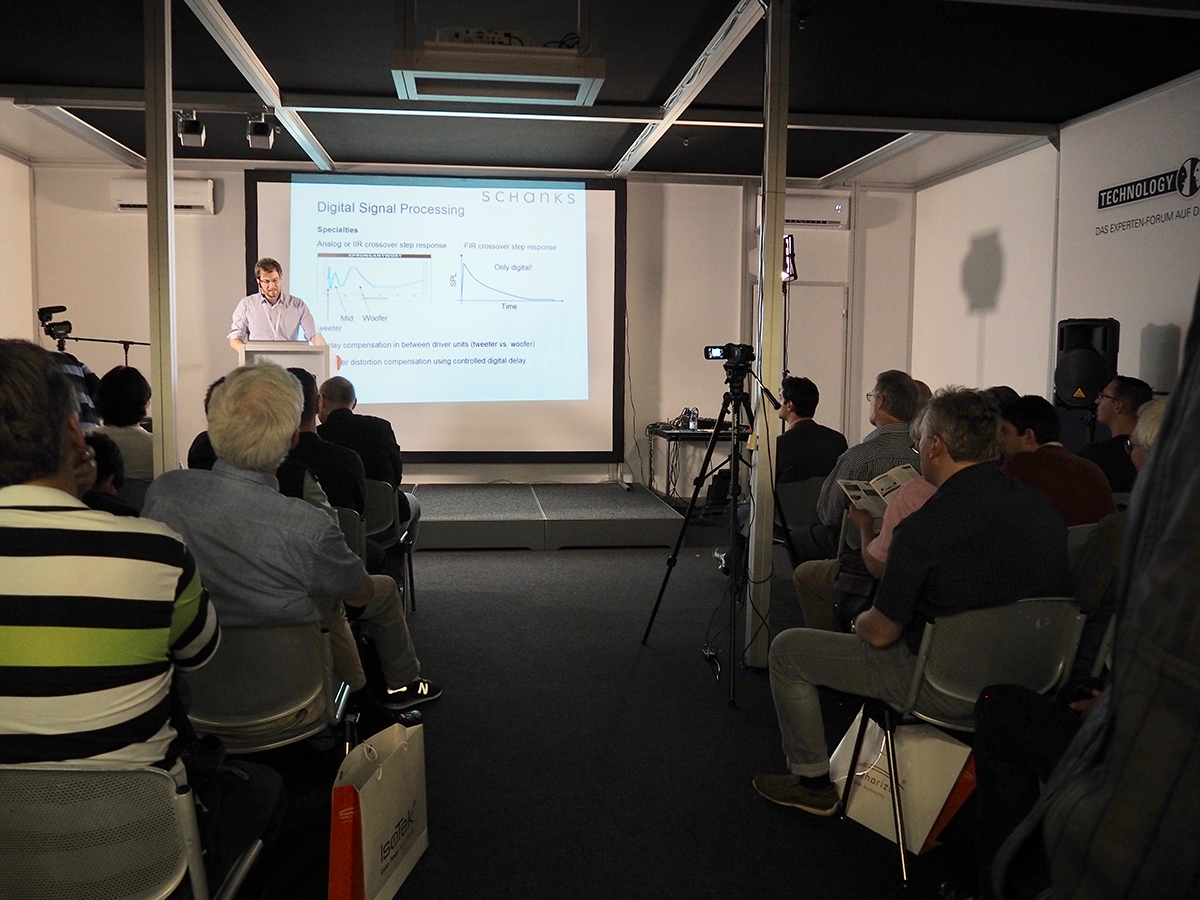 Once again there was an abundantly diverse special events program consisting of live music, workshops, lectures and music presentations. A highlight and visitor magnet once again this year was the popular “Hörbar” listening bar, where visitors were able to directly compare various headphone models with identical, high-quality music samples.

On Saturday afternoon, the “Quartet of Critics” had its debut at the High End. In cooperation with the High End Society and the independent “German Record Critics’ Award Association”, music journalists engaged in discussions with selected guests. Special guests were Harald Reitinger (composer, producer, TV moderator) and Andreas Spreer (sound engineer, founder and owner of the TACET label). At the event, special music samples were closely analyzed and presented to the audience. An exciting discussion ensued on the topic of music critiques in the age of social media ratings and fake reviews.

The Deputy Managing Director of the High End Society, Jürgen Timm, gave a positive recap of the event: “The High End is the ideal platform for presenting cutting-edge innovations, with a tremendous resonance throughout the world.” Exhibitors and visitors can attest to the fact that the exhibition has continued to develop in terms of its variety and depth of range. 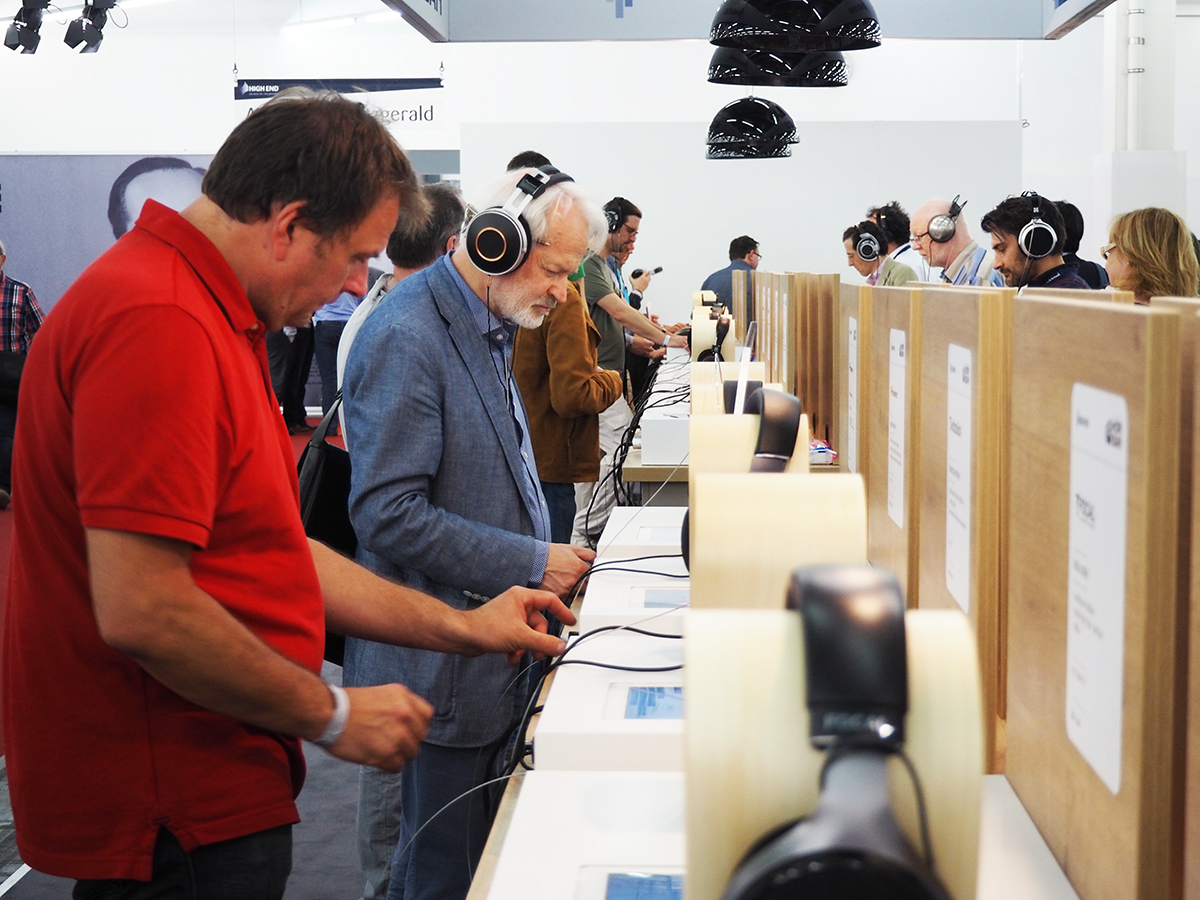 This is where the latest technologies and innovations are presented for the first time to a large audience. There are few industries where innovations are occurring on such a large and rapid scale. The digital transformation and networking constantly lead to new products with increasing performance. The exhibition demonstrated that streaming is trending in nearly all areas of the audio market. Networked and wireless products, such as sound bars and headphones, were also a ubiquitous feature at the show. The High End is a vital showcase for recognizing trends and the best rendezvous for making business contacts.

The next High End dates have now been fixed: 10 to 13 May 2018 at the MOC in Munich.
www.highendsociety.de
related items