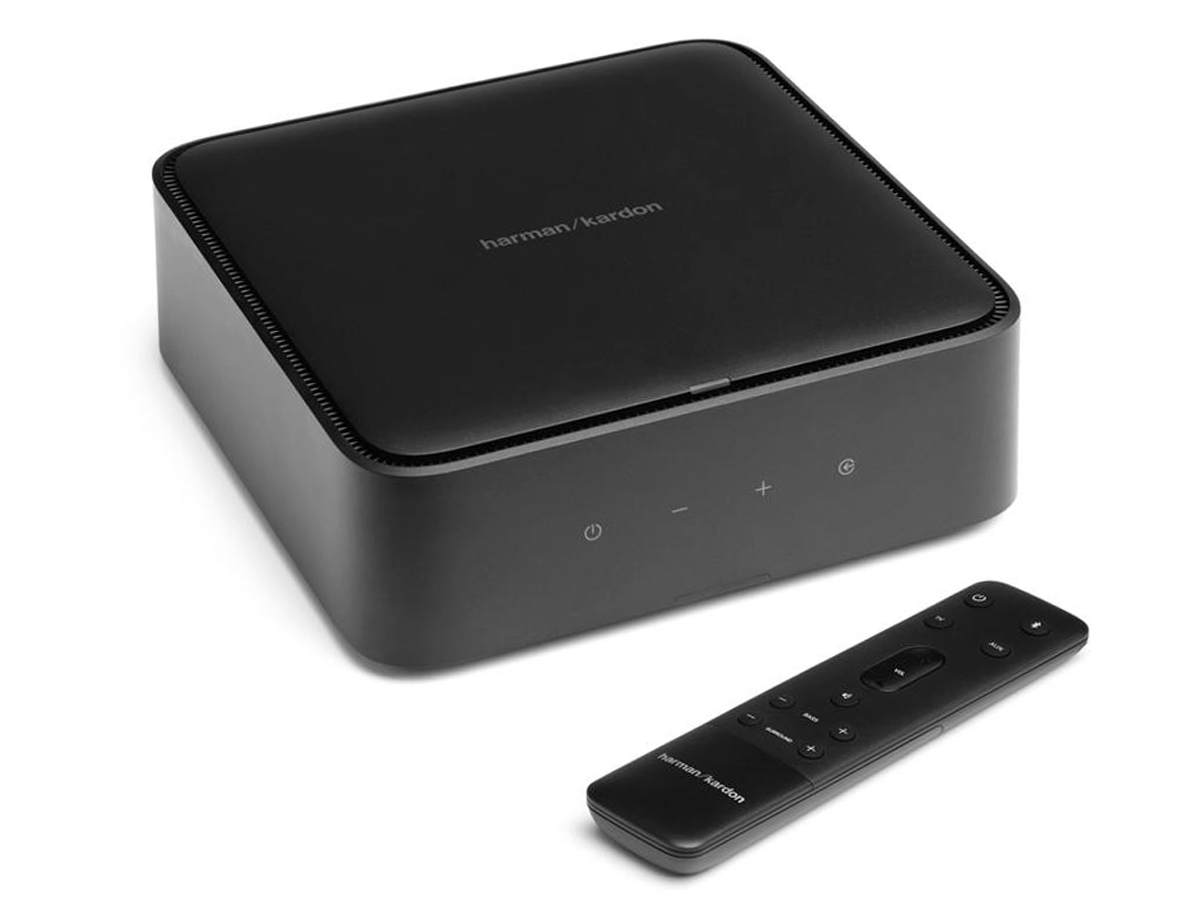 Harman Kardon, the original company founded in 1953 by Sidney Harman and engineer Bernard Kardon (which would later evolve to become Harman International), built its solid high-fidelity reputation on a series of key products. Those included early Citation tube amplifiers, followed later by Citation solid-state models, which have always embodied the brand's philosophy. More recently, when Harman decided to create its Citation family of products, the intent was to pave the way for a new generation of connected systems, starting in 2017 with the first Harman Kardon Citation smart speaker, quickly followed by the Citation Family of portable and multi-room home audio and entertainment systems, including a WiSA-enabled wireless surround sound range of speakers and soundbars.

For Harman Kardon to announce a new Citation amplifier as part of this family also meant going back to its origins, and making sure the brand would remain true to its spirit of pure, accurate sound quality. As the company stated in the 1980s, "Harman Kardon design engineers do not limit their research and development to merely producing impressive specifications. That is because all Citation products must meet a far more difficult requirement: they must have a pure, accurate sound quality. Citation products have been refined to such a high degree that conventional specifications, such as rated power, frequency response, and harmonic distortion do not adequately describe sound quality."

The challenge for Harman, now part of Samsung, was to design a Class D product that would make sense within the current Citation family of connected products, but also stand out in its technology implementation. And for that, Harman needed something new, leading its current audio amplifier design experts to approach Axign, a new company from The Netherlands, founded by former Philips and NXP employees who worked on the pioneering Class-D efforts. Axign was ready to deliver its AX5689 audio amplifier controller chip, which uses a digital control loop with feedback that is able to improve dramatically the fidelity of existing Class D solutions.

Fast forward to 2020, and Harman is ready to bring the new Citation amp to market, introducing a design concept that could be easily compared to the disrupting and extremely successful Sonos Amp, a very compact platform that quickly became one of the best-selling products from the wireless audio pioneer. Like the Sonos Amp, the new Harman Citation amp features the simplicity but also the expanded connectivity to enable a diversity of use cases, including being adopted by custom residential integrators and installation companies.


Unfortunately, in 2020 Harman was faced with a formidable double challenge. First, the current global pandemic situation doesn't allow promoting new products in massive-scale trade shows such as IFA or CES, while the new Citation Amp clearly requires a presentation in specialized forums such as CEDIA or even the home audio shows, which are not taking place. Second, a product such as the Citation - which was ready to ship - is not something easy to explain and promote directly to consumers using the current online channels that remain available and are quickly expanding while consumers are forced to stay at home. In fact, the entire wireless, easy-to-set-up, fully-integrated philosophy of the current Harman Kardon Citation family of products directly collides with the notion of an amplifier with speaker terminals, inherently designed to feed "old-school" passive speakers.

Possibly for those reasons, Harman decided to release the new Citation amplifier in selected markets and channels in Europe, with no official press release or event to signal its availability. The existence of the Harman Kardon Citation amplifier was quickly spotted and mentioned on a few local British audio and hi-fi websites, which basically all told the same thing and not much. That the new Harman Kardon Citation Amp was available, it was an expansion of the "popular range of wireless speakers" (no one remembers the long Citation amplifier lineage, apparently), and that the compact model was designed to power bookshelf and other types of speakers, including in-wall and in-ceiling, allowing a connection to the current whole-home wireless audio ecosystems.

As those UK websites stated, this is a compact (215mmx75mmx230mm) Class D amplifier, selling for £549 (British pounds, naturally), offering 125W of Class D amplification per channel into 8 ohms or 200W into 4 ohms, while adding "streaming smarts." Connections detailed include coaxial, optical, RCA, and HDMI ARC and can be used with a regular TV remote to control the volume (it actually ships with its own simple remote). Focusing on the wireless features, the information highlights built-in Google Chromecast and Apple AirPlay, Wi-Fi (802.11 a/b/g/n/ac) network, and Bluetooth 4.2 support, while briefly just mentioning that "the Citation Amp houses some clever technology that should make your music sound great," using something called Digital Loop amplification to correct "the natural errors and distortion anomalies that occur in digital amplification."


This same basic information was repeated ad-nauseam by all tech/gadget copycat websites all over the world (they all used the same few available images), which also report support for Control4 and Crestron home automation - which confirmed our thoughts that the Harman team was trying to compete with the successful Sonos Amp. Of course, the Internet-connected Citation Amp also offers "software smarts," which include adjustable equalization and presets to match different applications, while allowing Mono Summing and Variable Subwoofer Crossover, which reinforces our belief that this is a solution well-targeted at the CEDIA space.

Axign Inside!
After checking all the usual Harman resources and channels and not being able to find the slightest trace of the product announcement outside of the UK, we asked Harman's consumer PR agency for further information and press materials. We received the confirmation that the product hadn't yet been launched in the US and no further information was available.

Of course, we had already been alerted to the Citation Amp through a social media post from our friends at Axign, which pointed us to one of the original brief articles, which had in turn been shared by some Harman project development team managers. And Axign justifiably highlighted that the new Harman Kardon design features the company's "Digital Audio Converter and Class D Amplifier Controller AX5689 inside!" 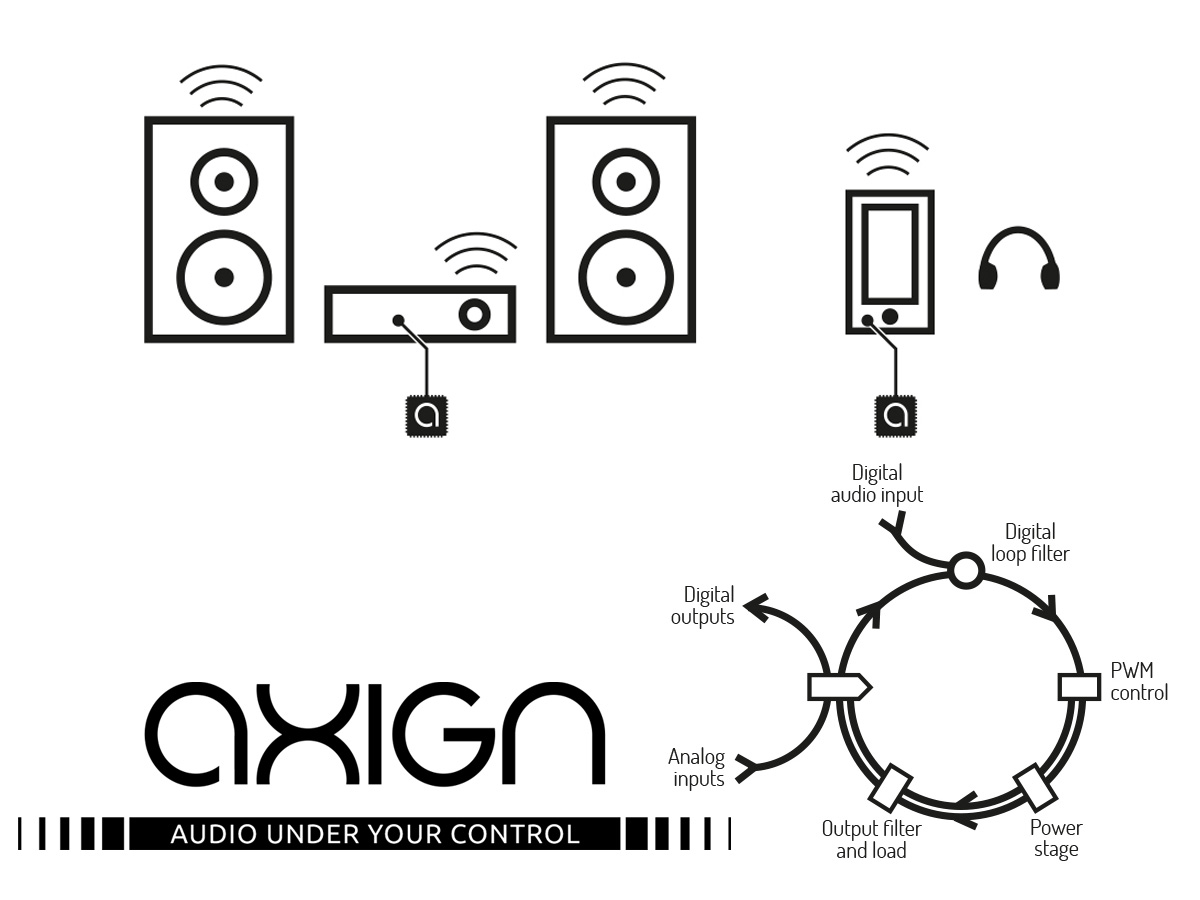 Having followed Axign for some years now - audioXpress was the first publication to feature a detailed report on the company's technology, in its December 2017 edition (available online here) - and having met the team at multiple trade shows, we can understand the excitement and simultaneous frustration the whole Axign team was experiencing. Axign saw the first listing of the Citation amp for sale online in the The Netherlands (Coolblue.nl) back on October 3. The first commercially available product featuring its technology was now shipping, and they weren't able to brag much about it...

After we messaged Richard Langezaal, Axign's Sales & Marketing Director, we received the confirmation that the Harman Kardon Citation Amp was in fact shipping, and that only the COVID-19 situation worldwide - particularly deteriorating in the US and Europe - had forced the company to postpone corresponding promotional events. According to Langezaal, Harman Kardon shared information about the Citation Amp with channel partners focused on Europe first.

Thanks to Langezaal, we received the manual for the amplifier and could confirm all the mentioned specifications, plus the very interesting fact that the Citation Amp also supports the WiSA wireless protocol and own modulation schemes - which use a separate 5GHz frequency range. This was an obvious feature to enable the Citation Amp to connect wirelessly with the remaining Citation wireless (powered) speaker family. But considering that WiSA offers uncompressed wireless audio multichannel support, this is also a clear differentiator from Sonos and any other amp in this form-factor currently in the market, making it even more attractive for residential integration. 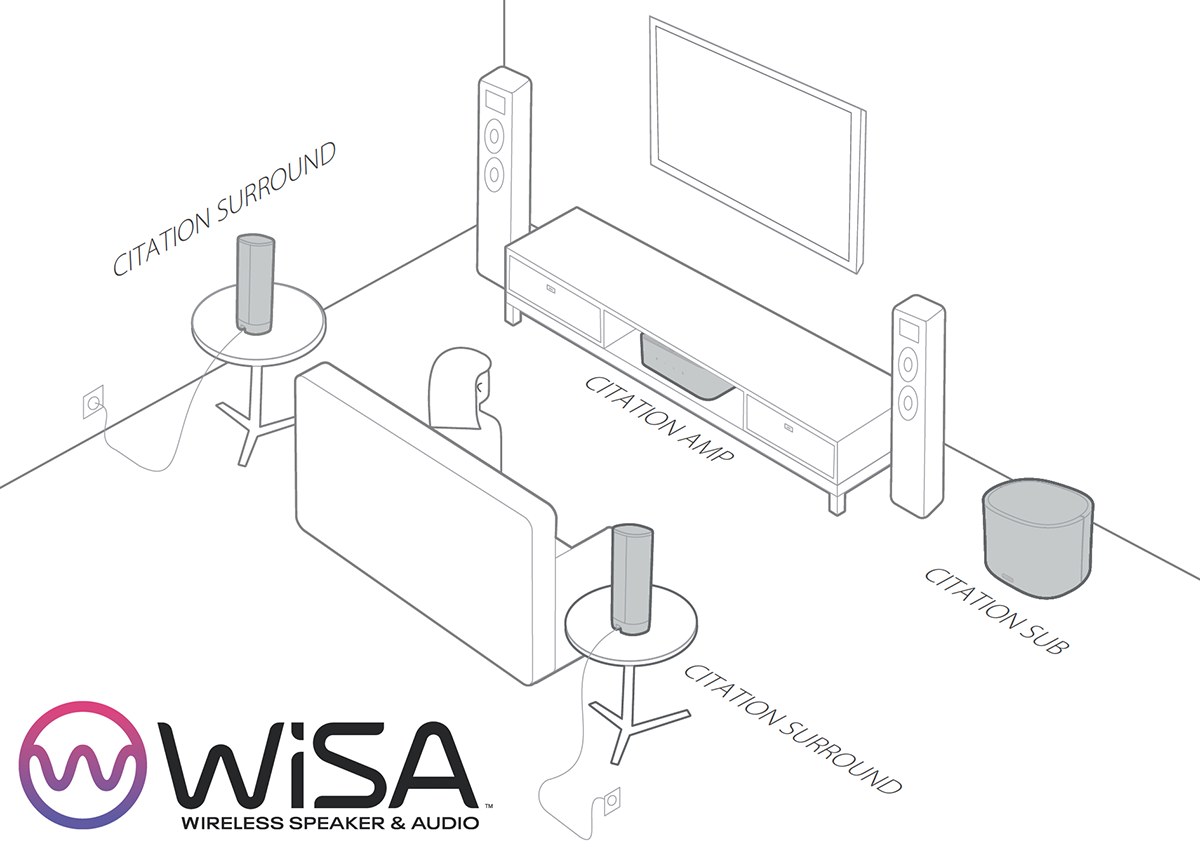 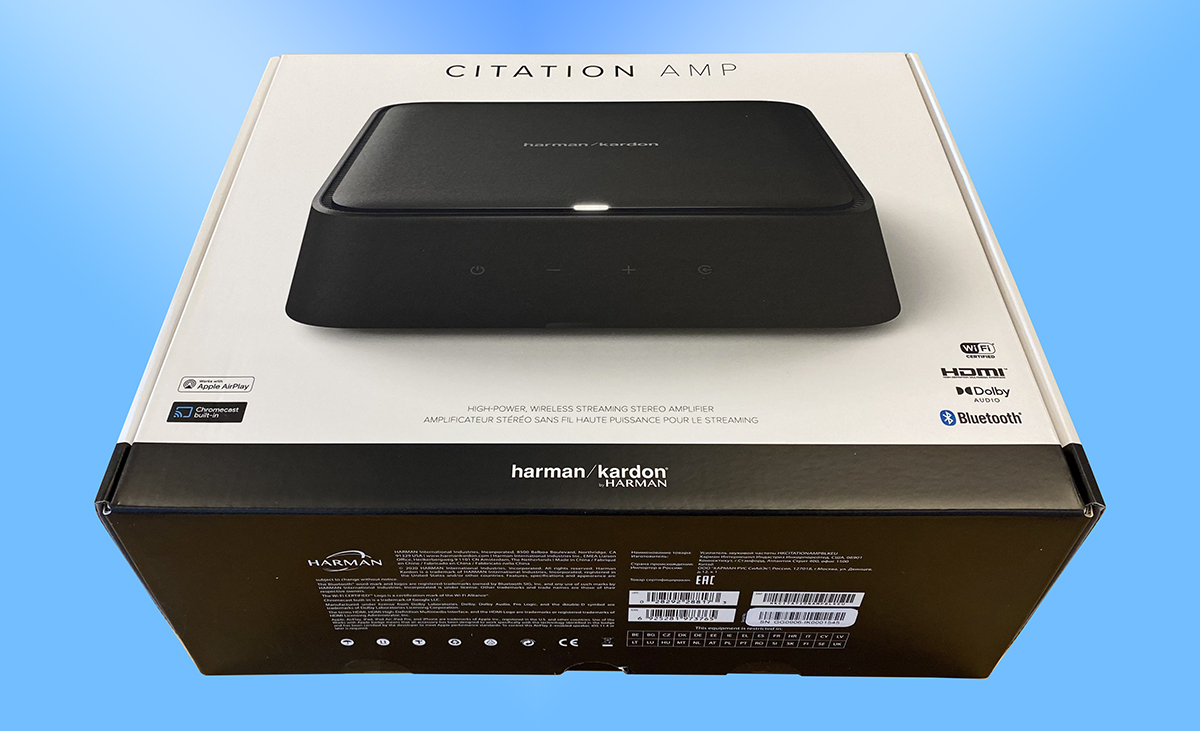 Of course, a very strong argument for the Citation Amp should be audio quality, and that's where Axign had a major role in this project, enabling the new Digital Loop Amplifier Technology. The sound quality should be a strong focus point for this product. You can learn more about Axign's exclusive recipe to make Class D amplifiers sound much better here, but until now any subjective or objective evaluation depended exclusively on purposely designed demo systems. This is the first product we can buy that uses the Axign technology on a mass scale.

The Axign solution is the fundamental piece in the design of the  Citation Amp. Being a connected audio amplifier the input signals, streaming and other sources, are fed to a DSP and from there proceed as a 32-bit digital signal to the amplification circuit - the Digital Loop Amplifier, with the Axign AX5689 chip, an audio converter and Class D audio amplifier controller IC at the core. After years of planning, the experienced Axign team delivered the chip in volume production to Harman's ODM. "Although we are a fabless IC development company and supplier, we use the best semiconductor fabs to produce our chips. We take care of the packaging, testing, quality, customer support and distribution, including buffer stocks," Richard Langezaal explained to audioXpress.

As the Axign solution is a DAC + Amp in one, it is able to process feedback from the loudspeaker terminals. "The digital control loop supports a full audio band suppression of any distortions. No increase of THD+N at higher audio frequencies. We have measured THD+N of 0.001% with the Citation Amp through its digital inputs, according to our expectations. The analog inputs come close as well. Every passive loudspeaker will sound as good as it has been designed for," adds Langezaal.

"A special detail is our 4-phase PWM switching. The output configuration is double BTL configuration per channel and the switching moments are interleaved. This increases the stability over a wider load range and output filter spread in production, suppresses more noise and pop, and suppresses the common mode noise of the residual of the carrier frequency, improving EMC.

"We have made sure with a lot of persistence that the Axign solution is well implemented. The most important differentiator is the loudspeaker impedance independency. The output filter impact has been eliminated. As the feedback is taken from the loudspeaker terminals, the damping factor is also very high," he further details. "We control the power stages, which are not ours, and can be any power stage brand as long as it supports PWM-in to PWM-out."

The Axign team knows exactly what is needed to take Class D amplification further, combining experienced engineers and managers from Philips Semiconductor and/or NXP Semiconductor. They all worked with Bruno Putzeys in the integrated UCD chip at Philips, and they are all very familiar with the subsequent work developed by Hypex and now Purifi Audio. Axign was created with the goal to take overall audio performance a step further, at lower system cost, for entry level high-volume consumer audio products. It's certain that we will see more Harman products with this technology in the future.