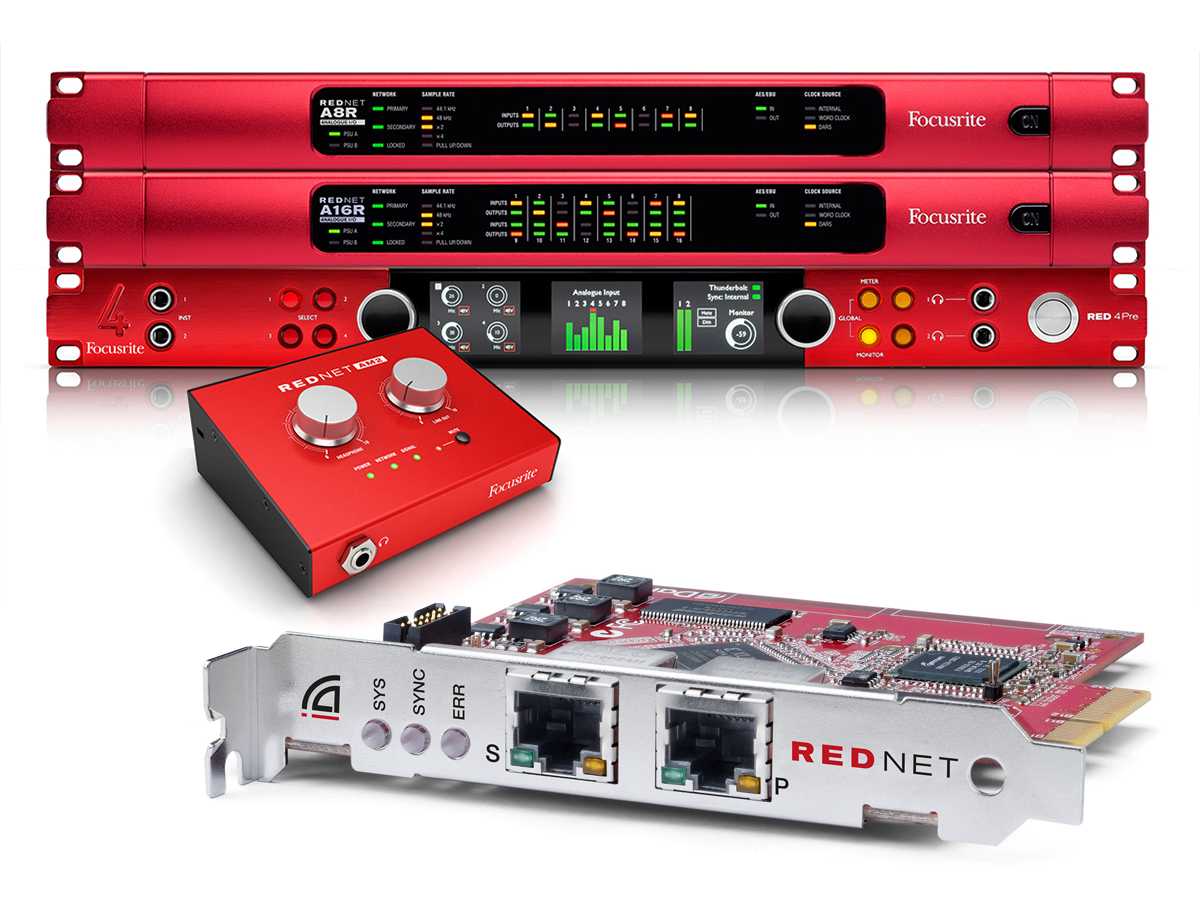 Launched in 2012, Focusrite's RedNet range was among the first to adopt the Dante audio-over-IP network as the infrastructure for a new and versatile range of products. Since then, RedNet has become increasingly popular for a diverse range of audio applications, from broadcast to opera, from studio to major live events. Over the last three years, RedNet has become known for its quality and reliability - as well as proving exceptionally simple to operate and offering one of the best-sounding audio-over-IP solutions available. Focusrite’s range of modular Ethernet-networked audio interfaces enable an extremely scalable, near-zero latency audio distribution system that can be used to expand I/O channel count, interface digital components, and/or bridge between Pro Tools|HD or MADI and the Dante audio network.

Among the most recent expansions to the RedNet range of audio networking solutions, the company now announced the RedNet A8R, an eight channel Dante-networked A-D and D-A converter, with network and PSU redundancy, together with the RedNet A16R, a similar version with 16 channels. Following also announcements made at the end of 2015 and early 2016, Focusrite has now confirmed availability of the RedNet PCI Express card with network redundancy, enabling ultra-low latency audio and full track count for Dante audio-over-IP networks. Also available is the new RedNet AM2 Stereo Dante headphone amplifier and line output interface solution with PoE, announced in 2015, during the 139th AES convention in New York, and the flagship Red 4Pre, a 58 in / 64 out Thunderbolt 2 and Pro Tools HD compatible audio interface, announced already in 2016.

Additionally, Focusrite is now shipping all four second-generation RedNet models announced in 2015, such as the MP8R 8-channel remote-controlled mic pre and the D16R AES interface; the new HD32R HD Bridge for Pro Tools and D64R MADI Bridge. Interoperable with all other Dante-compatible units, these RedNet interfaces are particularly designed for live sound and broadcast applications, due to their power supply and network-redundancy, locking Ethernet connectors, and compact 1U form factors.

The RedNet A8R converter operates at standard sample rates up to 192kHz/24-bit, including pull up/down, with sample rate, operating levels and other features configured remotely via software running on the host computer. The unit offers a dynamic range of 119dB A-weighted, A-D and D-A, with a frequency response of 20Hz-20kHz ±0.15dB. Front panel indicators include tri-color LED level indication for each channel along with sample rate, clock source, PSU and network status indicators.

The new RedNet PCIeR for Dante features similar functionality to the existing RedNet PCIe, adding dual RJ45 Ethernet ports to allow two networks to be connected to the card, which can switch between them automatically according to network availability. The card supports 24-bit/192kHz operation with connected interfaces, and requires a standard four-lane PCI Express card slot in a Windows or Mac computer, or Thunderbolt chassis. The card delivers 128 inputs and 128 outputs at 44.1, 48, 88.2 and 96kHz (64 I/O at 176.4 and 192kHz), with under 3ms analog-to-analog latency when used with RedNet A-D and D-A at any sample rate, combining the best possible system performance with exceptional reliability.
www.focusrite.com/rednet
related items