Before transistors, vacuum tubes (or valves in the UK and some other countries) were used mainly as an amplification component, and tube circuits, particularly audio amplifiers remain extremely popular among music enthusiasts. Among musicians, tubes also remain highly appreciated for guitar amplifiers, for dynamic processing in equalizers and compressors used in professional recording studios, and in general used in any stage that is able to convey the warming effects of tubes.

The way tubes affect sound is also appreciated for its strong coloration, unique harmonics and transients, particularly when applied to modern, clean digital recordings. Understanding how vacuum tubes add life and vintage warmth to today’s digital music production, Eplex7 DSP created a software emulation to recreate all the possibilities of tube stages, conveniently available as a plug-in that can be used directly on individual sounds/tracks, to enhance musical elements of a mix, or apply directly in final mixing and mastering.

Leveraging its 17+ years of experience with digital sound processing and analog electronics, Eplex7 DSP created a unique algorithm recreating vacuum tubes in the most realistic way possible, and combined it with analog circuit simulation technology to recreate everything that significantly affects the behavior of tubes devices and its effects on sound, including harmonics.

"While most digital tube plug-in emulations just produce digital distortion and unwanted, harsh sounding digital artifacts which are amplified after mastering / limiting (and not so much rounding of transients), you can hear a significant difference when testing and comparing our analog simulation algorithms. You can hear transients and trebles that are really softer, rounder – more pleasant to the ears; there is no digital distortion but only a nice analog saturation; the signal is really fatter when the power knob is turned right; and the signal is significantly warmer with a little bit of color.

The Eplex7 DSP VD76 plug-in interface translates the company's analog emulation technology with actual switches and knobs that will be intuitive to its intended audience - even if the names don't make any sense to anyone familiar with tube circuits. Following an Input potentiometer (which we assume behaves as a sort of gain), the Triode knob is described as introducing Fatter and Warmer saturation, while the Pentode knob is described as a "more vintage, thin and dirty type of saturation".

This is followed by another potentiometer named Circuit Power that is intended to add "fatness" to the sound and "makes bass / drums big and massive." This, Eplex7 DSP explains, emulates the behavior of circuits around vacuum tubes. And because there was an Input knob, there is obviously (not) an Output knob. On the top row, after a bypass on/off switch, there is a "bass cut filter" potentiometer to "eliminate deepest sub-bass" - and this offers a scale of "0 to 70Hz".

On the right size of an image of a tube, there is another mysterious potentiometer, named Circuit/Tube temperature. As Eplex7 DSP describes "in electronics higher temperature usually means more noise, because higher temperature means more movements of electrons. Noise is not always unwanted. A little bit of analog noise can make signal more natural, more pleasant, less sharp and can eliminate sharp distortion." So there. 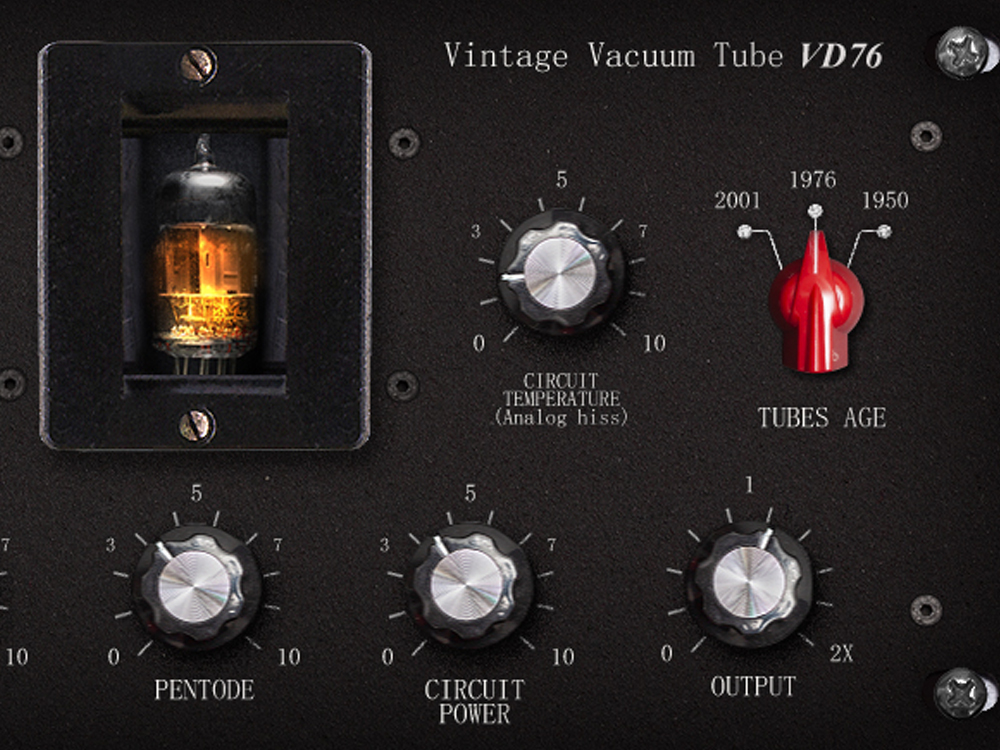 Finally, a really interesting detail in the plug-in interface is the "Tubes Age" switch. According to the company, this is a "special virtual emulation" that allows users to travel in time by selecting between 3 different types of tubes:
2001 – bright, modern and precise sounding.
1976 - vintage tube with silky round transients, trebles and crunchy sound.
1950 – old vintage tube with round transients and dark smooth sound.

The most amusing part of the interface is the detail of the "control panel" labels, in typical DIY decal style, using the worst possible font, and with every letter spaced differently and where even the company's logo looks awful and out of place.