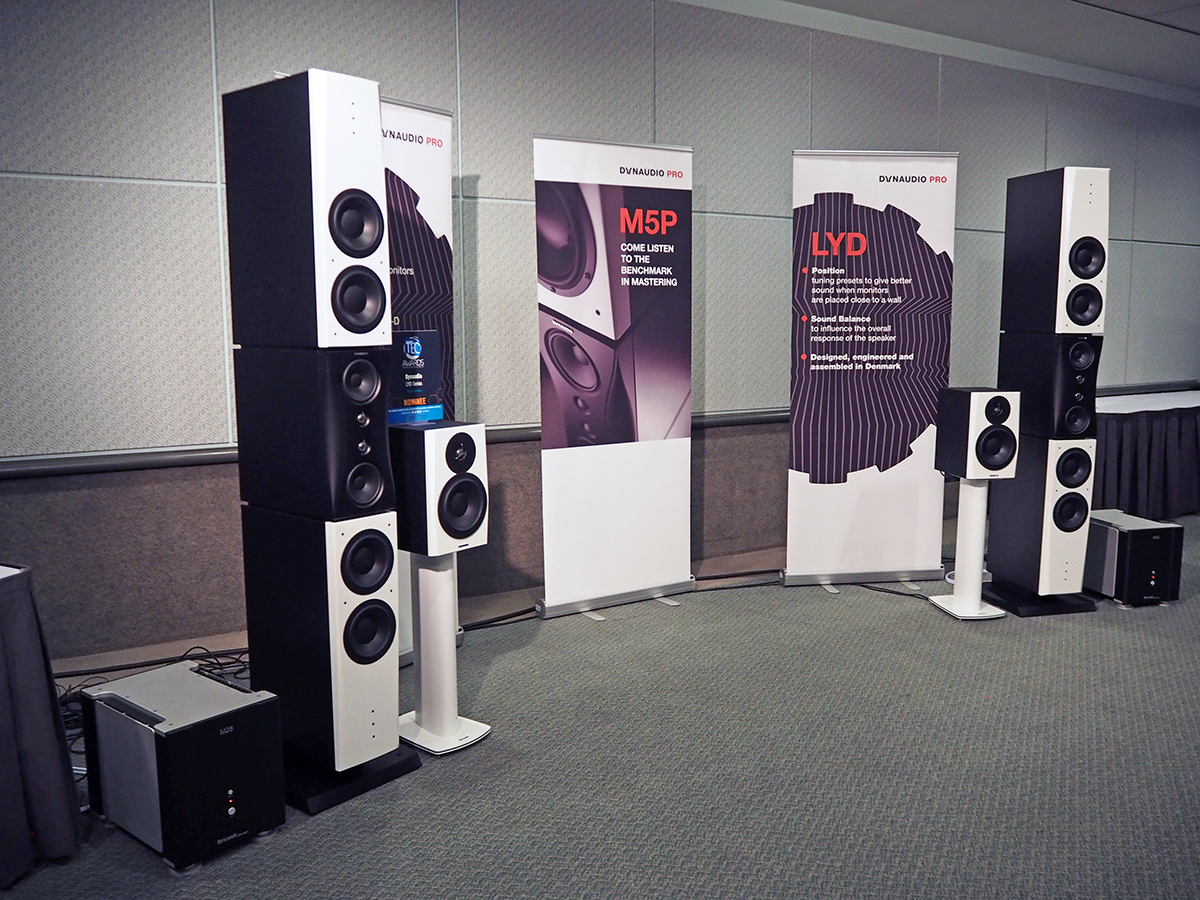 The Dynaudio M range of speakers has been a staple in main monitoring in studios around the world for years. With the M5P Evidence, Dynaudio added a monitor to the range that is specifically suited for mastering. The M5P is also the first studio monitor to feature Dynaudio Directivity Control, a technology that utilises a symmetrical drive unit array and an elaborate crossover topology to control sound radiation, which makes it easier to integrate into any studio room.

Dynaudio Directivity Control builds on a vertical, symmetrical drive unit array and an elaborate crossover topology, which leads to a controlled sound radiation. With two tweeters, two mid-range drivers and four woofers per loudspeaker, each drive unit complements its counterpart with regard to frequency response and phase relationship in such a way that an immensely accurate and defined sound radiation characteristic is achieved.

The energy radiated to the room’s floor and ceiling is reduced by approximately 75%. This makes the M5P less dependent on the room and less critical in positioning as compared to other studio monitors. To implement DDC in the lower frequencies, the woofer cabinets are positioned directly above and below the midrange and high frequency driver middle section in order to provide a more equally spread radiation of the lower frequencies into the room. Further, the four-woofer-design combines the diaphragm surface of a larger single-woofer design with the power, speed and control of four smaller single voice coil-magnet- assemblies. 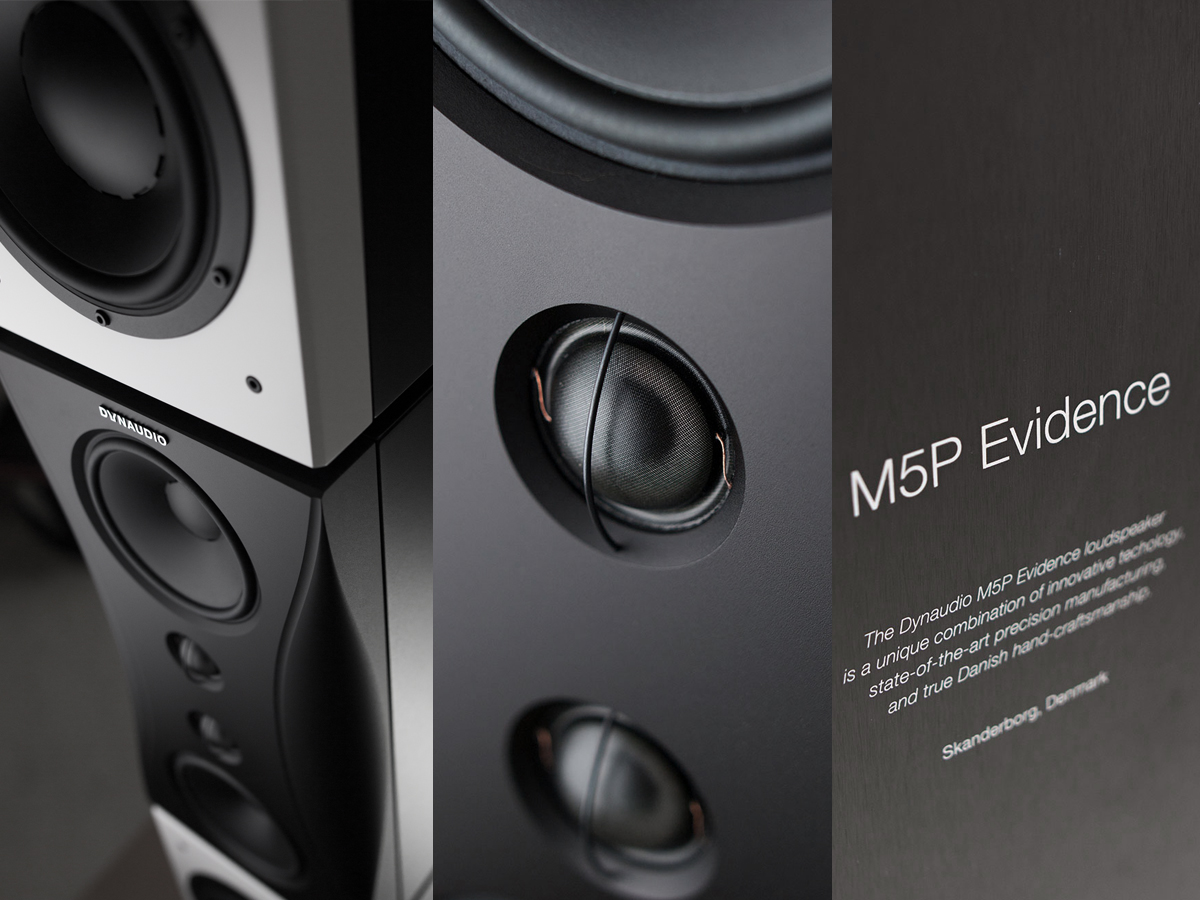 For this new monitor system Dynaudio used its highly acclaimed Esotar2 tweeters that require a time-consuming and labor-intensive manufacturing process where the fine fabric diaphragm is shaped into a dome and then treated with a specially formulated coating. As a further refinement, the tweeter’s aluminum voice coil is suspended in magnetic oil to increase power handling while also improving the dome’s excursion.

For the middle section, the M5P Evidence features two drive units and two soft-dome tweeters integrated in the solid, CNC-machined aluminum mid section. This choice of material and its specifically rounded sides ensures a uniform and ultimately uncolored sound dispersion. The aluminum mid section’s own sub-enclosure is completely shielded from acoustic vibrations.

Similarly, to counteract any sonic resonance, a separate compartment isolates and provides the perfect mechanical and thermal environment for the carefully assembled, and close-tolerance selected, crossover components. In addition, the compartment is passively ventilated at the back so that the crossover components always remain within a safe operating temperature range – even at continuous high volume levels and during extreme transients.

Crossover frequencies for this 5-way design are configured at 290, 480, 2200, and 8500 Hz, with frequency response for the M5P Evidence covering 28Hz to 25kHz. The actual crossover components are integrated on glass fibre-reinforced PCBs, using selected oxygen-free copper cables for the internal wiring. IEC power handling is rated for 550W at 4 Ohms.

“The M5P Evidence monitor is a passive floor-standing studio monitor specifically designed for mastering applications,” says Dynaudio PRO product manager, Sebastian Rodens. “It has been derived from the acclaimed Evidence Platinum High-End speaker and is the first studio monitor to feature Dynaudio Directivity Control (DDC) which reduces reflections from floors and ceilings for delivering the highest possible level of transparency and details in reproduced audio to mastering engineers and other audio professionals. A speaker that allows you to hear what is really going on and that helps you to make those crucial decisions when tweaking the EQ or working with dynamics during a mastering session.”

Being a far-field monitor, it is recommended to listen to M5P Evidence at a distance of 3 meter or more. The basic design is a 5-way crossover approach, featuring 4 x 7” woofers, 2 x 5” midrange cones and 2 x 28mm tweeters with crossover frequencies at 290 Hz, 480 Hz, 2.2 kHz and 8.5 kHz. The frequency response area covers 28 Hz to 25 kHz and the speakers are capable of handling up to 550W at 4 Ohms.
www.dynaudio.com
related items