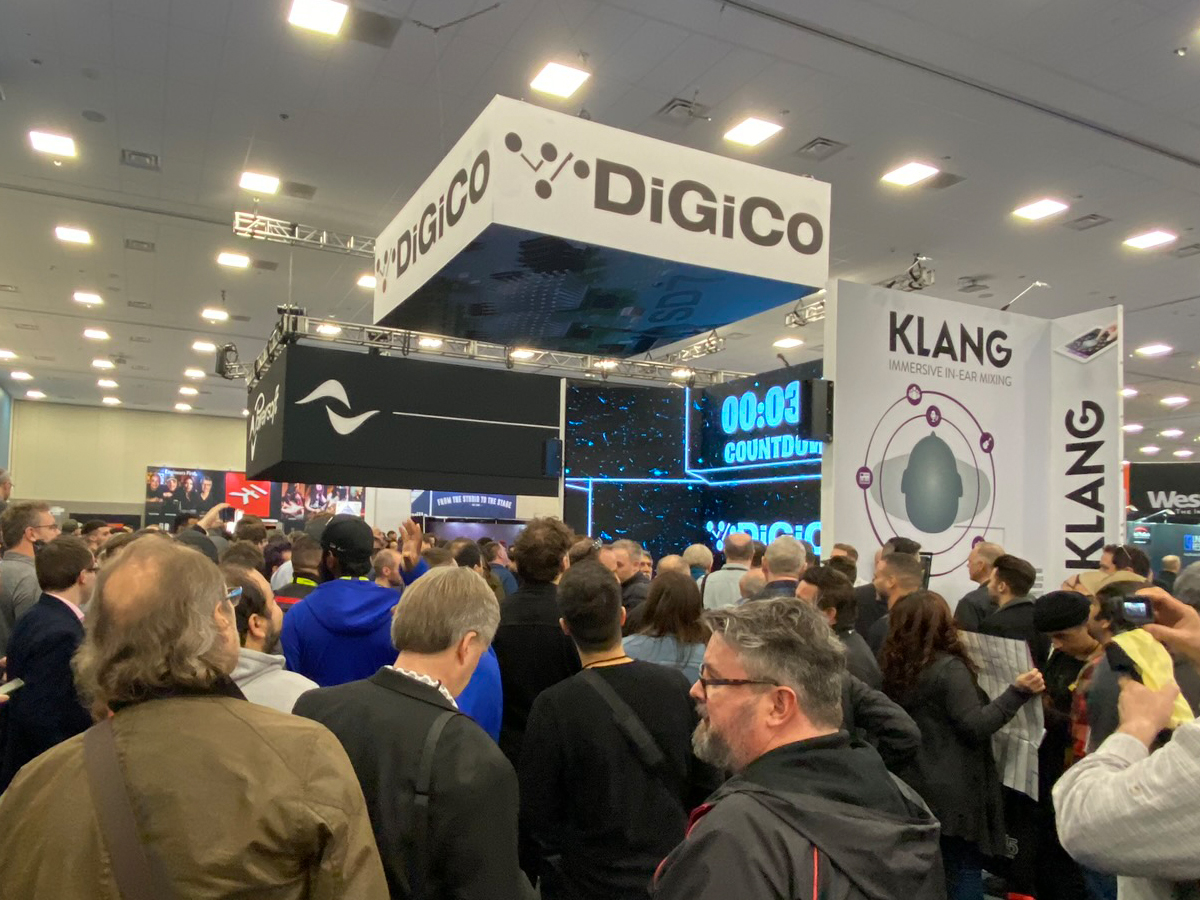 It was one of the longest product launch events ever at the NAMM Show, scheduled for unveiling at precisely 3:38 p.m. (no, that's not a typo) on the first day. The crowd - a mix of the company's dealers, distributors, clients, press, and many NAMM attendees simply attracted by the gathering - waited anxiously for the countdown, waited another 15 seconds until something happened after the "0", watched a long video, until someone explained from the stage what was being launched - and no one could see given the amount of people that surrounded the new products. Anyway, after more than two thirds of the crowd finally disbanded after being clear there would be no free food or drinks, the actual products were visible and they are actually something relevant for the whole live entertainment industry.

The first of the new products is the DiGiCo Quantum 5 console, with orders being taken now for delivery later in 2020. The Quantum 5 digital mixing console follows on from the huge success of DiGiCo’s flagship Quantum 7. Along with the newly launched Quantum338, the Quantum 5 is part of DiGiCo’s expanding Quantum range, developed with seventh generation FPGA devices that further expand audio processing power. As with the Quantum 7, the Quantum 5 engine slots neatly into the existing SD5 frame and, with its 37 faders and three 15-inch full color TFT touchscreens, provides Quantum processing features, power and connectivity in both new and existing hardware. 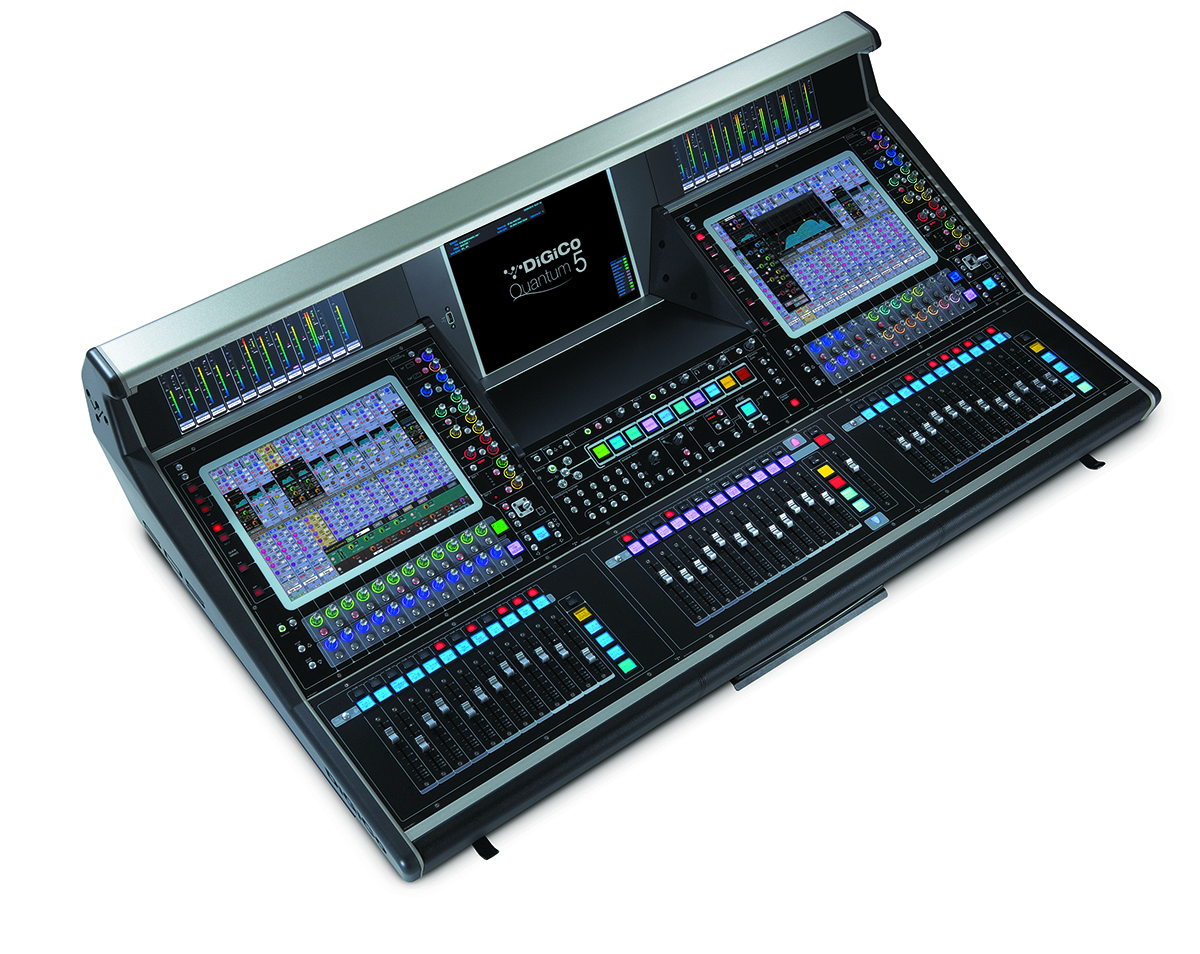 The Quantum 5 expands the SD5 version to over 450 channels of processing at 96kHz. It includes up to 256 input channels with up to 128 busses and a 36 x 36 matrix. The engine is also equipped with four redundant, or eight individual, MADI ports and two DMI slots (DiGiCo Multi-Channel Interface) for AoIP and other connectivity options from the complete family of DMI card options, plus a built-in Waves port and up to two Optocore loops.

Other Quantum enhancements include the highly regarded Nodal Processing which allows monitor engineers expanded creativity on their IEM mixes, and of course True Solo to allow them to hear exactly what the artist does. These are combined with the multiple flavors of 48 channels of Mustard processing and 12 Spice Rack processing slots, including Chili 6 - the creative names used by DiGiCo to differentiate its expansion audio processing options.

The Spice Rack, meanwhile, supports plugin style native FPGA processing options, allowing users to build a rack of up to eight insertable processors. The first of these is the Chili 6 – a six-band multi-band compressor which allows full control of all parameters, including DiGiCo’s unique, patented, release shape control, which means Chili 6 is perfect for shaping vocals and instruments as well as focusing on problem frequencies.

“Quantum 5 makes complete sense as an upgrade path for both new and existing SD5 users,” comments DiGiCo general manager, Austin Freshwater. “It allows them to take advantage of all the new Quantum features while maximizing their ongoing return on investment.”

The All-New Quantum 338
But the greatest surprised unveiled by DiGiCo was undoubtedly the all-new Quantum 338 (which explains the scheduled launch-time of the event), representing a dramatic leap forward in power and connectivity, in a (slightly) smaller format console. 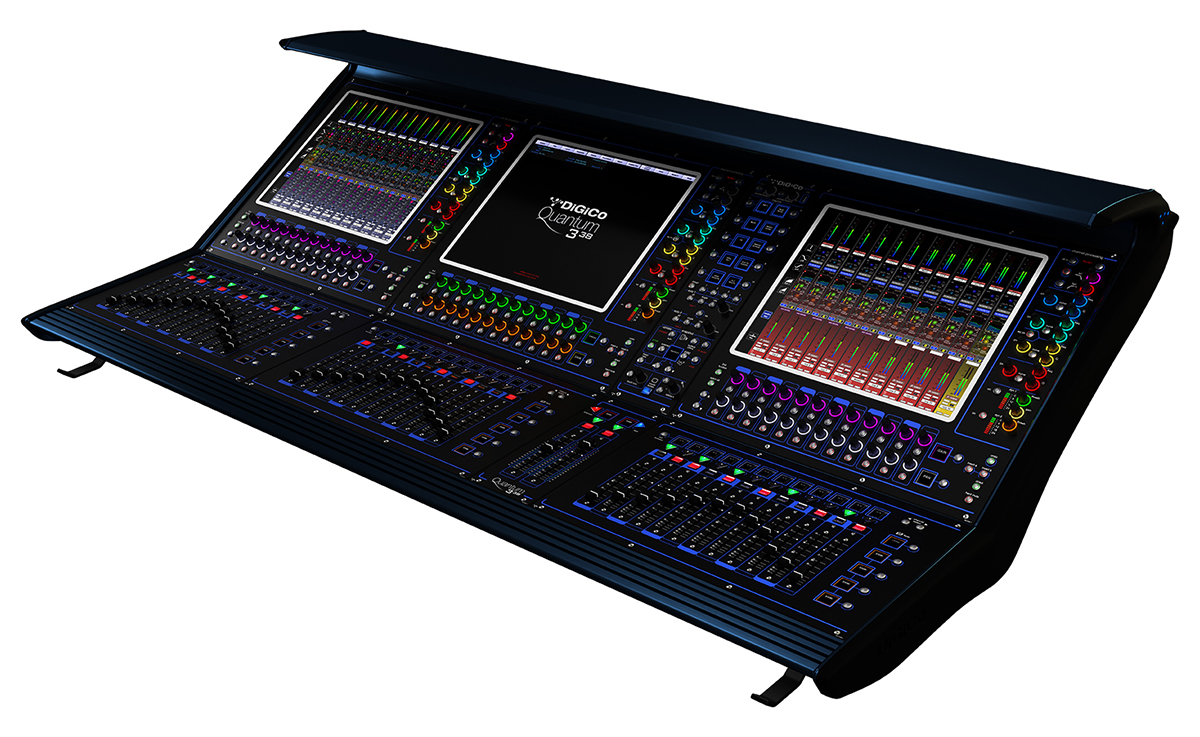 “With Quantum 338, we have ensured that we are providing a next generation console that works in synergy with our Quantum Engine,” says Michael Aitchison, DiGiCo’s Senior Electronics Engineer. “We focused our R&D team on user experience, learning from the last 20 years, with our continuing main objective of merging new with familiar.”

The Quantum 338, based on seventh generation FPGAs, includes 128 input channels with 64 busses and a 24 x 24 matrix, all with full channel processing. There is a new look and feel dark mode application and three 17 inch 1000 nit, high brightness, multitouch screens, allowing both the meter bridge and soft quick select buttons to be displayed on each screen. There are also 70 individual TFT channel displays and the floating Quantum chassis features 38x 100mm touch sensitive faders laid out in three blocks of 12 fader banks, plus two dedicated user-assignable faders, each complete with high resolution metering.

A new level of local audio connectivity and performance comes via the “Ultimate Stadius” (in reference to DiGiCo’s Technical Director, John Stadius) 32-bit ADC and DAC conversion, which are built in to Quantum338 as standard, alongside six single or three redundant MADI connections, dual DMI slots and a built-in UB MADI USB recording interface. 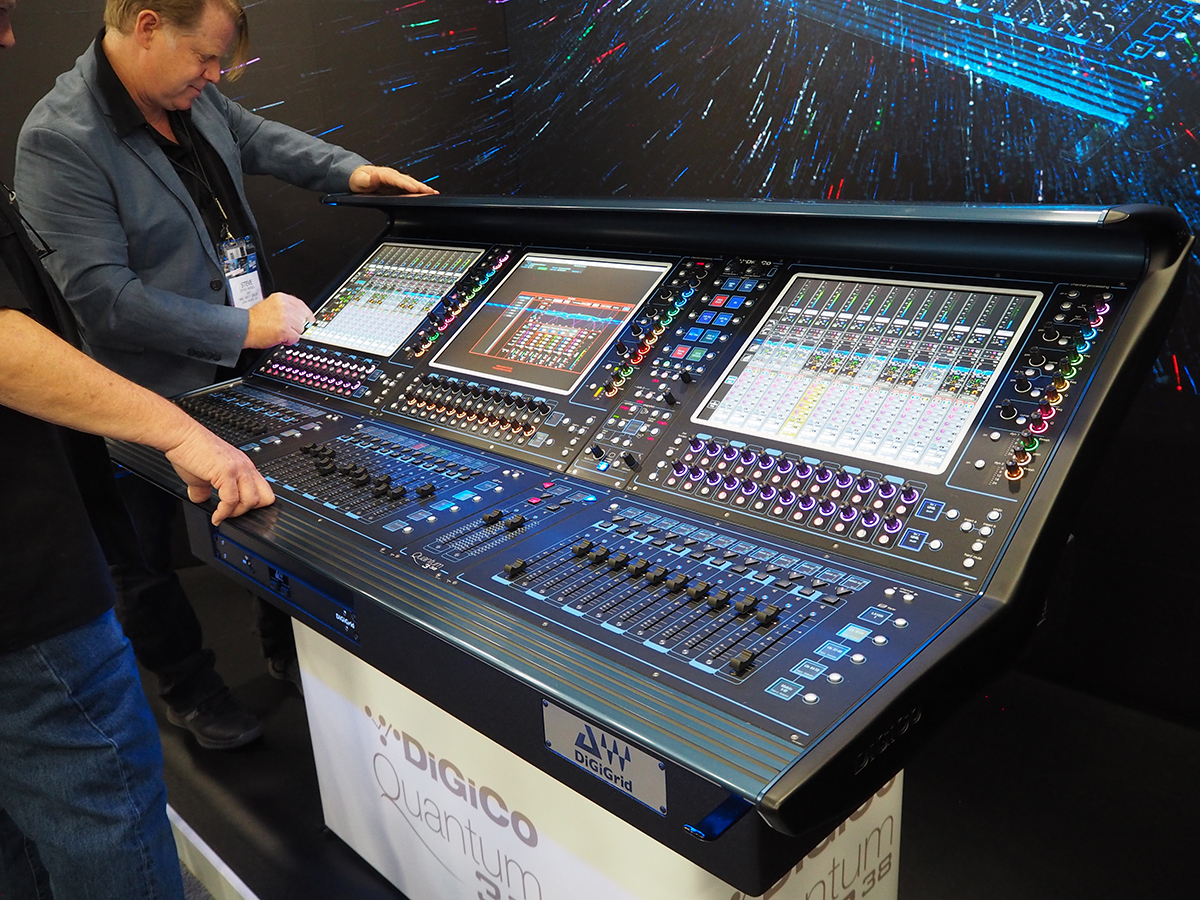 Mustard Processing, Spice Rack, Nodal Processing and True Solo, all launched last year for the Quantum 7, are also standard on the Quantum338. The Quantum338 is equipped with 36 mono Mustard processing strips which can be used on any channel type, while the Spice Rack supports a rack of up to eight insertable native FPGA processors, including the Chili 6 six-band compressor. 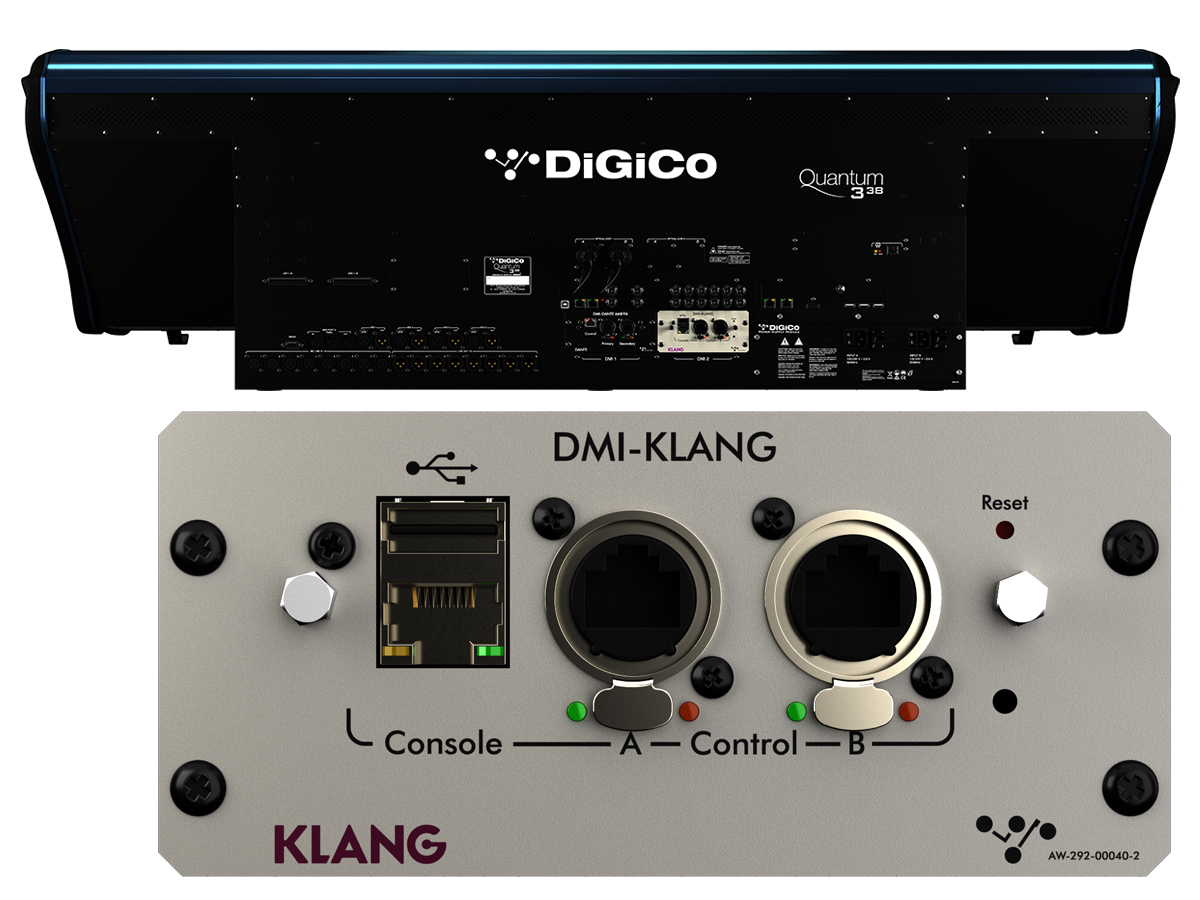 "This is the first hardware product since KLANG and DiGiCo joined forces,” says DiGiCo’s General Manager, Austin Freshwater “We took KLANG:fabrik’s immersive in-ear mixing core and rebuilt it with today’s latest FPGA technology. With one device, we can now deliver immersive mixes of 64 inputs for 16 musicians. This is the highest input count of any KLANG product to date. And the best thing is, we were able to bring the processing latency down to a quarter of a millisecond.”

The DMI-KLANG connects directly to DiGiCo consoles’ internal audio stream without any additional hardware I/O or overhead. This makes it possible to route any audio channel from the console to the DMI-KLANG and return the immersive mix to the Aux merge input. Via the DiGiCo KLANG console link, monitor engineers can stay in their usual mixing workflow, use snapshots, faders and knobs, but with all the benefits of immersive in-ear mixing. This makes it the perfect companion for any monitor engineer who needs to deliver the ultimate 3D mix for their artist.

"The DMI-KLANG is just the beginning of a new line of products," says KLANG’s co-founder Pascal Dietrich. "Together with the DiGiCo OrangeBox and the many I/O expansion cards available today, we can now interface with almost any professional digital mixing console."

Available DMI cards offer MADI (TP, BNC), Optocore, Dante and many other digital formats. Additionally, by using the KLANG:app, personal mixing can be done on any tablet, smartphone or PC/Mac.
www.digico.biz
related items