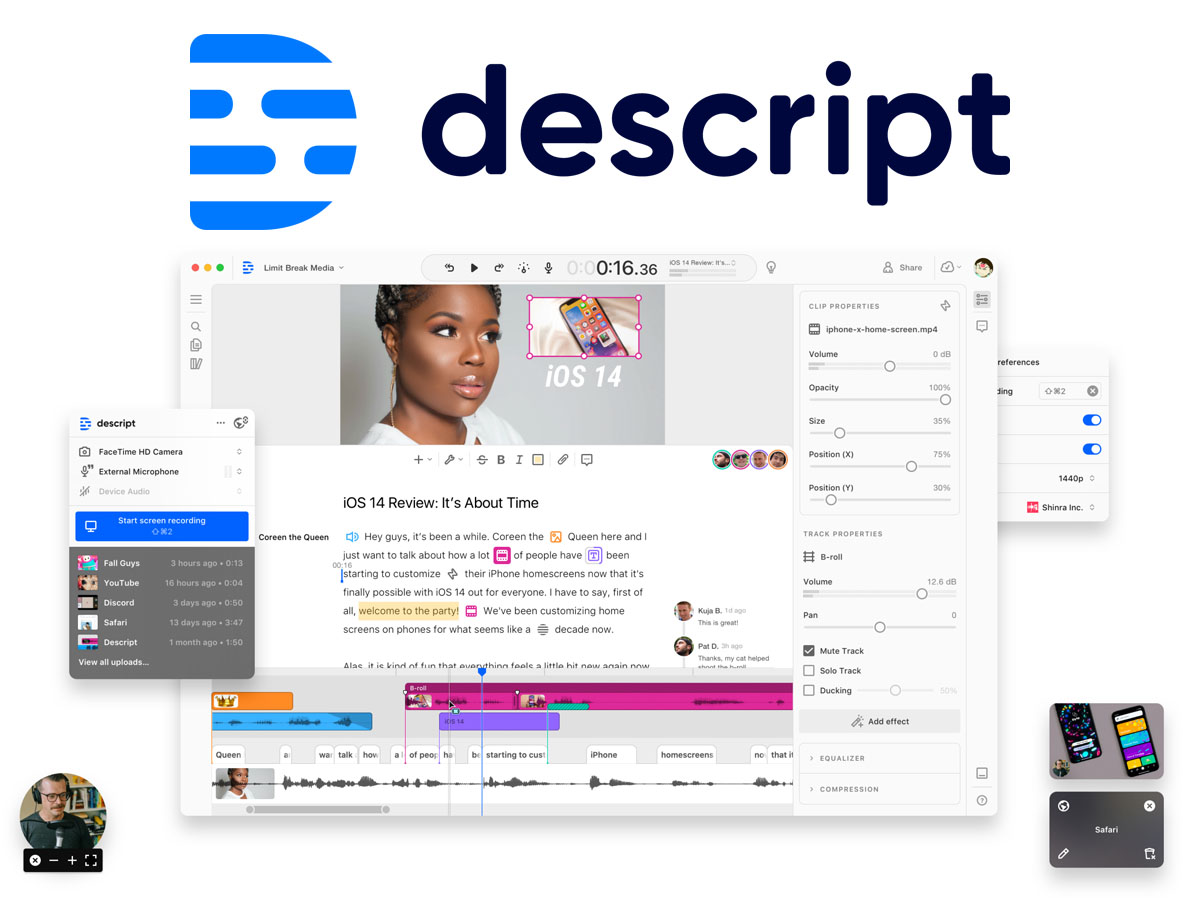 Descript was founded in 2017, and launched a suite of transcription and audio editing tools. Since then, its app has been adopted by leading media outlets such as NPR, Pushkin Industries, VICE, The Washington Post, The New York Times and more. By incorporating full-featured video editing and screen recording capabilities into its audio editing workflow, the company is now fully realizing its original vision.

Descript Video is a collaborative audio/video editor that works like a word doc - meaning, it allows creators to edit audio and video based on content like words and sentences, because the application analyzes and understands audio, and transcribes it to text. The application includes transcription, a screen recorder, publishing, full multitrack editing, and very powerful and useful AI tools, perfected by Descript in the original audio-centric editing tools.

Descript's AI-based tools include automatic audio to text transcription with industry leading accuracy and powerful collaboration tools. This enables the ability to edit content and purge recordings from filler sounds like "ums," "uhs", or "you knows." And going a step further, Descript implemented the impressive ability for a user to type text and generate the corresponding audio using re-synthesis for ultra-realistic voice cloning. This tool is called Overdub, and is a state-of-the-art voice generator that lets users create a text to speech model of their own recorded voice.

"Today's release reflects a vision we’ve had for Descript since day one — that the division between audio and video editing tools is a historical artifact," says Andrew Mason, the founder and CEO of Descript. "Today's creators have a healthy disregard for the traditional boundaries of content mediums, and they need a tool that’s equally capable in audio and video. Breakthroughs in AI enable the creation of a new class of narrative media creation tools, one doesn’t force a trade-off between power and ease of use. We’ve been building this foundation for over five years, and it’s finally here. Our aim with Descript is to give everyone who records audio and video the ability to craft it into something great, and make editing something that’s not only within reach, it’s fun." 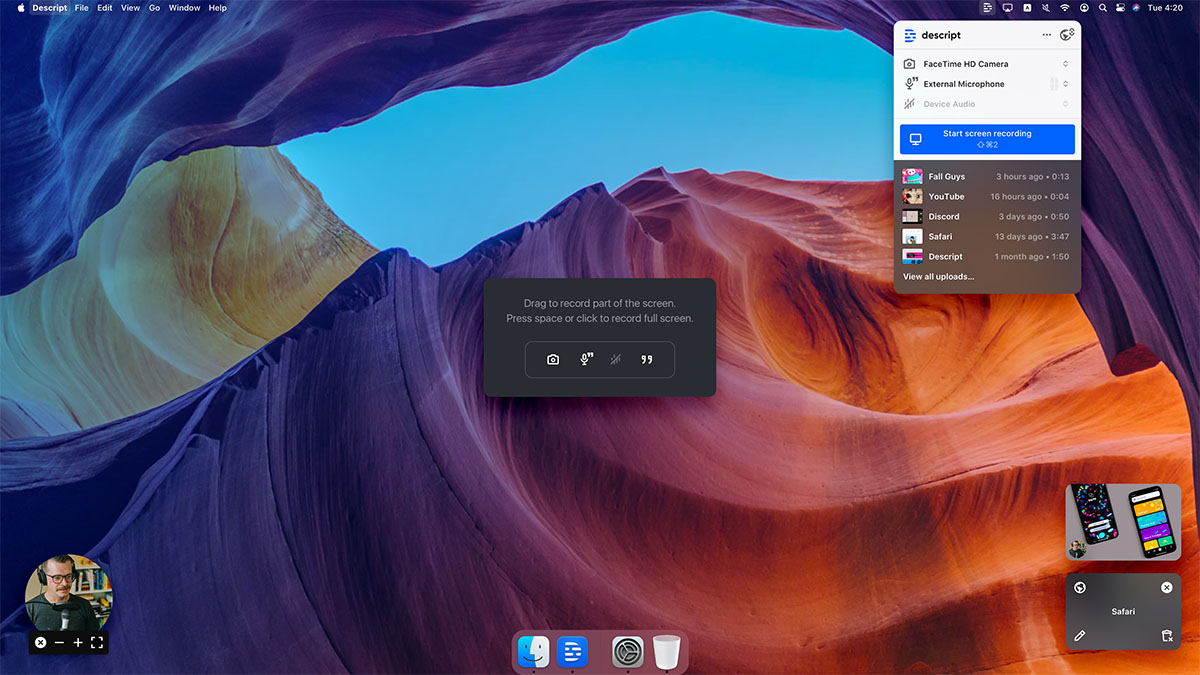 Video is an increasingly essential part of how we communicate, with more than 50 million creators on YouTube, Instagram, Twitch, TikTok, and other social media platforms, according to a new SignalFire “creator economy” report. Video is also the primary form used in content marketing and YouTube beats out Facebook as the leading source of video content for global consumers. But while it’s gotten easier to capture and share video, editing remains difficult, slow, non-collaborative, and more importantly cost prohibitive.

Descript’s fast and intuitive AI-driven platform enables users to capture, edit, polish, and share video content with unprecedented speed and ease, regardless of experience. And among the key features in the Descript Video platform, some were designed for remote collaboration and users working from home. For example, there's a screen recorder that makes capturing video faster and easier than ever before, and tools to share the content with a single click.

Recorded video is transcribed in real-time, so users can quickly load the video into the Descript app for editing. After that the transcription takes place, editing video in Descript is the same process as editing a document. Users just simply cut, copy, paste, and delete text, and the underlying audio and video will follow. Filler words or rambling outtakes can be removed with a single click, and if users want to change a word or phrase in an audio recording, Overdub allows users to create an ultra-realistic clone of their own voice and create speech by typing text in the Descript app. 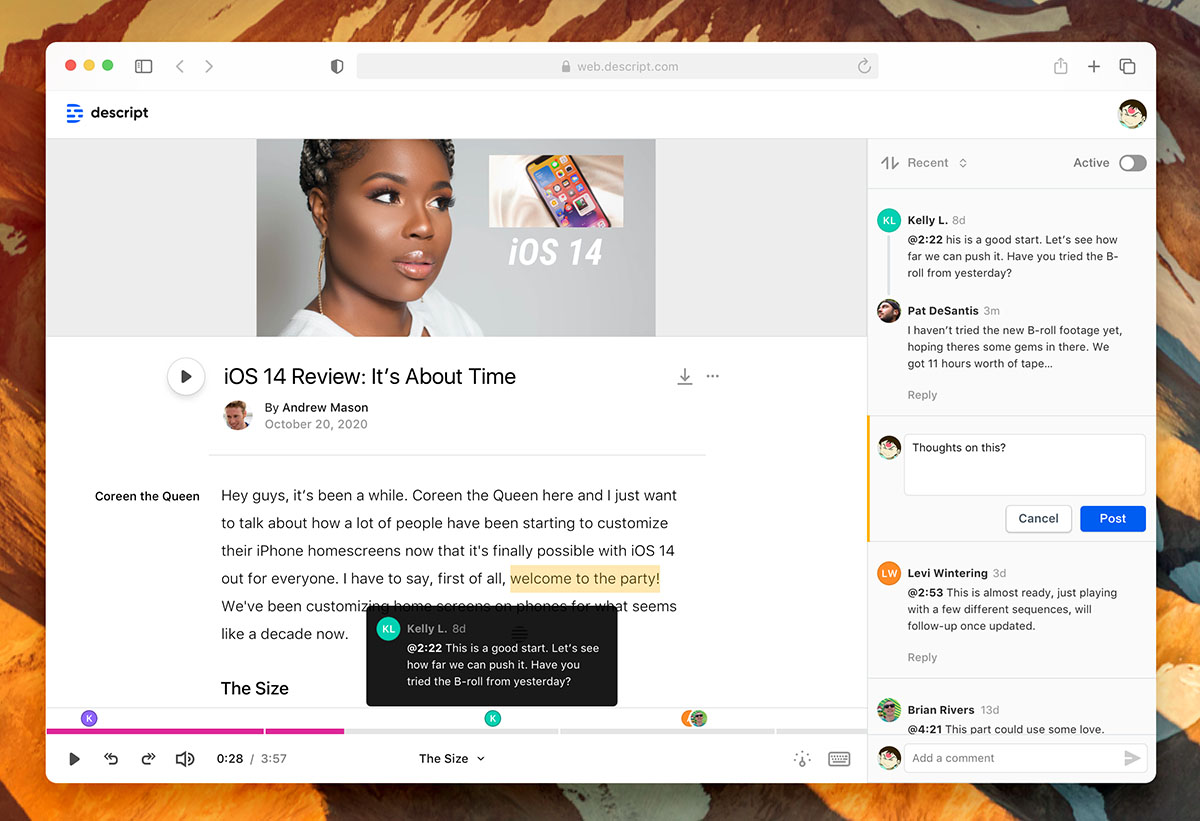 Descript is also the first video editing solution to feature live collaboration in the style of Google Docs, so users can invite colleagues to add slides while fine tuning a voiceover, collect editorial feedback using comments, and more.

And Descript includes powerful tools that enable users to create polished videos with ease. Users can drag and drop images, videos, titles, and transitions to create slideshows, video overlays, and more — or drag in a music file to give the content a soundtrack. It's also possible to switch between camera angles with multicam support, add animations to zoom, pan, and rotate titles, videos, and images, and easily add subtitles and captions.

When it’s time for publishing, the Interactive Transcript feature allows users to quickly publish content to a URL with a single click, and embed videos with what Descript considers "the only searchable transcript on the web."

Descript’s full-featured video editing platform is now available with multiple subscription options, starting with a free trial, that can be evolved anytime to a basic creation platform or fully-featured Pro subscription. There are also customizable options for enterprise subscriptions.
www.descript.com
related items