Cadac is debuting the latest addition to its CDC digital console line in Europe, at this year’s Prolight+Sound exhibition. The new 36 fader CDC seven maintains all of the feel and familiarity of the CDC six, with its major ergonomic advance in user operation and resulting minimal learning curve. Scaling up operational flexibility, the CDC seven doubles up on both the large format LCD touch screen, and associated encoders, and the physical fader count; also expanding the number of inputs to 96. The new console retains the CDC six’s 56 busses; with 54 of them now being configurable with the latest V4.0 software update.

CDC seven’s exceptional ‘human interface’ and feature set combine in aiding the workflow and allowing the engineer full creative freedom, unhindered by operation of the technology. The dual 23.5” LCD touch screens display the uniquely intuitive CDC swipe-able user interface. Encoders immediately to the right of and below both screens further encourage the instinctive use of gesture – touch and swipe – operation in navigating and operating the console. The major advantage of the dual screens is the ability to simultaneously display and control multiple tasks; e.g. the VCAs can be displayed on one screen while the inputs to the VCAs are displayed on the other. The faders and encoders naturally follow the GUI displayed on the individual screens, resulting in further increases in the speed and flexibility of the workflow. An additional centrally mounted 6.5” LCD touch screen provides access for system control. 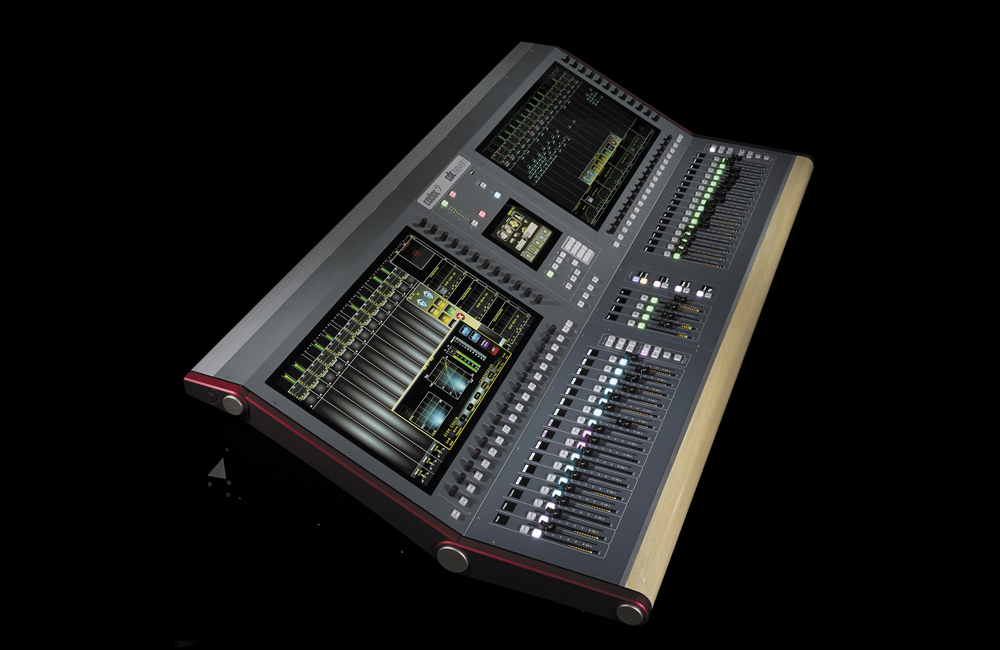 Like all CDC consoles, the CDC seven employs Cadac’s MegaCOMMS low latency digital audio network, designed to meet the requirements of the most challenging production and system installation applications. Cadac’s CDC audio protocol allows total through-system propagation delay from inputs on stage to outputs, including all console processing and A-D / D-A conversions, in 37 samples (@ 96 kHz), or just under 400μs; making it the audio industry’s lowest latency protocol. The console features 16 creative on-board stereo effects and is preconfigured with an integrated 64 x 64 Waves interface; enabling direct connection to a Waves MultiRack SoundGrid server with access to the vast Waves’ library of plugins (license dependent), as well as multitrack recording directly to a laptop.

V4.0 Console Software is the very latest operating software upgrade for CDC eight, CDC six and CDC seven. The standout feature in V4.0 is Sticky Channels with custom layers on the 23.5” touch screen. Sticky Channels allows users to create custom layers with any combination of inputs, outputs, or VCAs on the main 16 channel fader bank; either “stuck” to the left hand side of the screen (starting at channel 1) or the right side (ending at channel 16). On the CDC seven and CDC eight this is an option for both screens, so two custom layers can be deployed at the same time. When a custom layer uses less than 16 Sticky Channels, the remainder operate as normal, either via the swipe or the layer buttons functions. Custom layers can also be assigned to the user assign buttons for fast access.

VCA’s will also unfold if pressed from within a custom layer and on a CDC seven and CDC eight they can be spilled onto the second screen - significantly increasing speed and flexibility of work flow. Custom layers can still be simultaneously assigned to the 4 – channel Master Section.

Other features of Version 4.0 include an additional 6 busses if LCR is not required, Cross-Fade added to cue events, metering on each bus output within Monitor Mode, access to GEQ from Monitor Follow at the press of a button, a console lock, additional functions to the user define buttons, plus a revised Patching GUI.

Cadac, established in England in 1968, has been inextricably linked with high end audio mixing consoles from its earliest designs for recording studios and broadcast applications, through to the latest range of live sound consoles, found on concert tours and in theatres. In January 2009, Cadac was acquired by Soundking Group Company, established for more than 20 years, and one of China's leading audio manufacturers.
www.cadac-sound.com | www.soundking.com
related items