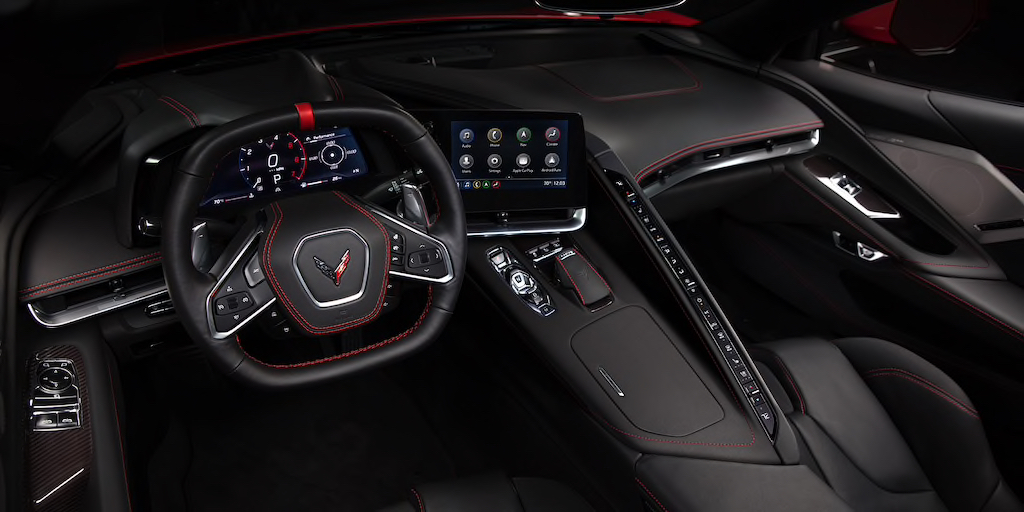 The tradition of collaboration between Bose and Chevrolet that began with the 1984 fourth-generation Corvette, continues with the new 2020 Corvette Stingray featuring a world-class sound system. With 14 precisely placed speakers inside the cabin — the most Bose has ever put into a two-seater — each occupant is surrounded by a diverse mix of high-quality and lightweight loudspeakers.

“The new Corvette Stingray is phenomenal, and it delivers a special kind of experience that doesn’t happen very often. So, getting every detail just right is critically important — and that includes audio,” says Tobe Barksdale, chief audio engineer, Bose Automotive Systems. “The next-generation Corvette already delivers a thrilling soundtrack, courtesy of the engine. And when it comes to adding music to the mix, the custom-engineered Bose Performance Series system brings the moving emotion you’d expect in a legendary vehicle like this.”

Bose engineers worked closely with Chevrolet to develop the sound system during the most significant transformation in Corvette’s storied history, as it moves to a mid-engine design from the more conventional front-engine layout.

Shifting the engine location changes the size and shape of the vehicle cabin compared to previous generations and impacts the way music and sound is heard inside the car. This presented new challenges to the Bose system engineers, requiring innovative and creative techniques to deliver the best listening experience possible. Using a deep understanding of psychoacoustics, along with advanced tuning capabilities, the Bose team designed an offering unlike any other in more than 35 years of engineering sound systems for Corvettes.

“From the beginning, we knew we had to have an audio system that carefully balanced the need to isolate the occupants from the engine compartment in the rear, while providing live performance-like audio clarity,” says Tadge Juechter, Corvette executive chief engineer. “The Bose system technology in the 2020 Chevrolet Corvette Stingray delivers that careful balance.” 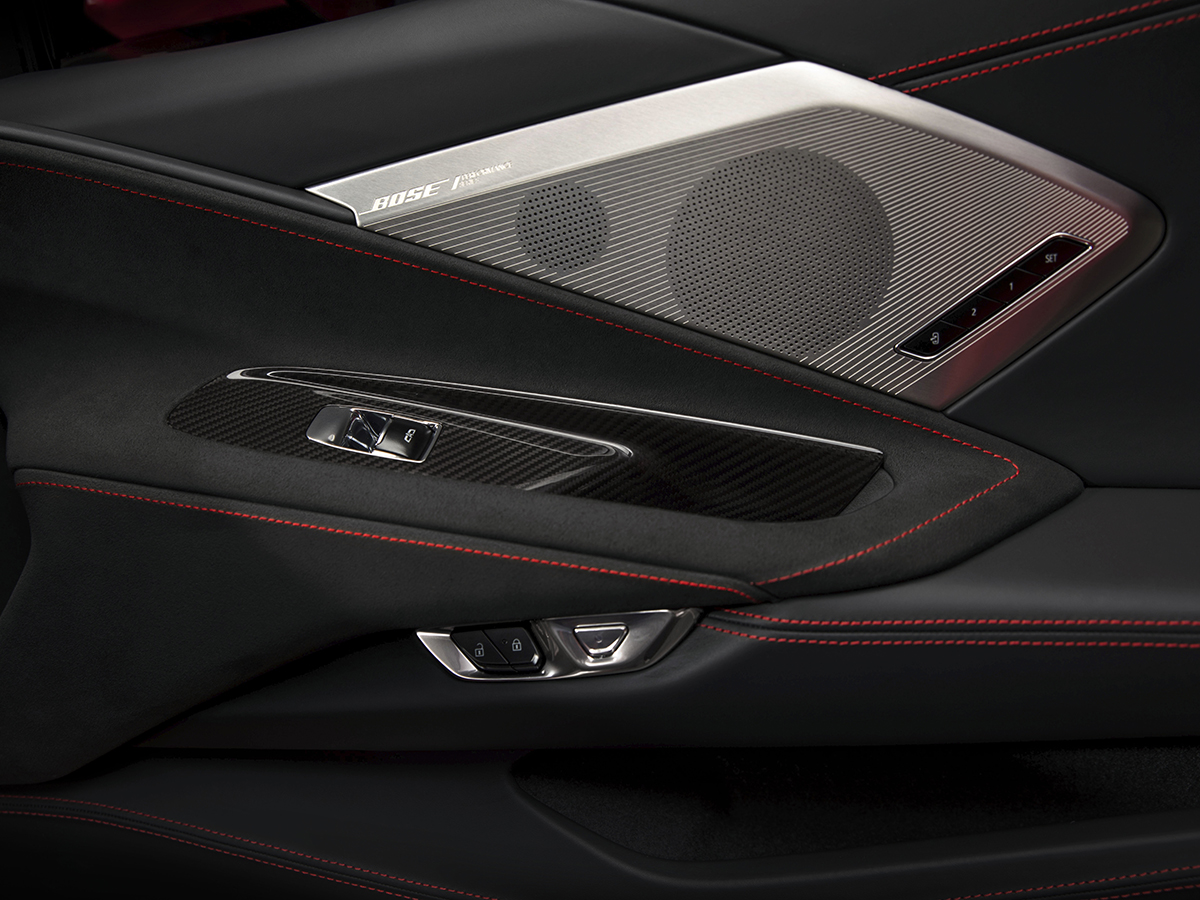 The Bose Nd woofers aren’t visible, but they produce a tremendous amount of low-frequency output, with minimal distortion, by using the architecture of the door itself as a massive bass enclosure. Unlike conventional systems that use a customized bass box with woofers inside, space limitations in the new Corvette made that approach impractical.

And instead of placing speaker grilles over the woofers, which could be abrasive to the driver’s and passenger’s legs when cornering the vehicle at high speeds, Chevrolet designed a smooth, padded surface for the interior door panel.

To preserve the listening experience, even when the new Corvette engine is roaring at full throat, the Bose Performance Series system features a custom-tuned version of AudioPilot noise compensation technology. Using microphones built into the cabin to continuously monitor noise levels and a sophisticated Bose algorithm to analyze and adjust the music signal, AudioPilot technology reduces the effects of external sound. But because of the power and lightning-quick acceleration of the new Corvette Stingray, this application of AudioPilot requires faster processing than ever before. 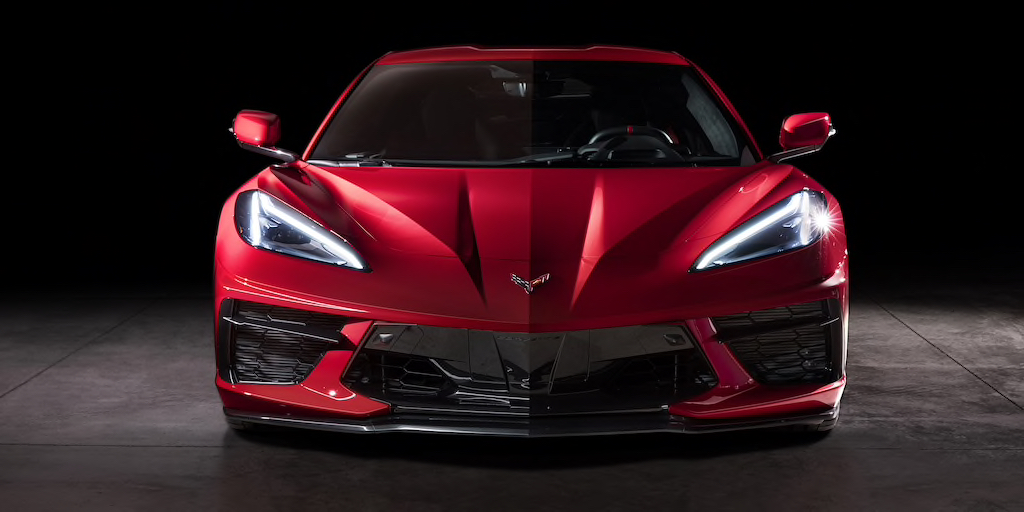 Additional Bose innovations in the Performance Series system include Chevrolet’s first application of Advanced Staging Technology to produce an extremely wide sound stage with detailed separation between instruments and vocals. The system also uses Bose Centerpoint stereo-to-surround digital signal processing and Bose SurroundStage technology for balanced, 360-degree sound at each seat. And it’s all processed through a Bose digital amplifier with 16 channels of custom equalization.

The Bose Performance Series system will be available as an option on the 2020 Corvette Stingray. A 10-speaker Bose Premium surround-sound system will be offered as standard equipment. More details on packaging and trim levels will be announced by Chevrolet closer to the vehicle’s on-sale date.
www.boseautomotive.com
related items