For our March 2015 edition, we have selected a series of articles dedicated to Test & Measurement, both from a practical and a DIY perspective. First is Ethan Winer’s (re)take on Practical Applications for SPL Meters, followed by an historical recap from Voice Coil magazine editor Vance Dickason, on his reputed Test Bench process used to characterize drivers. We also discuss Headphone Testing issues among other things. 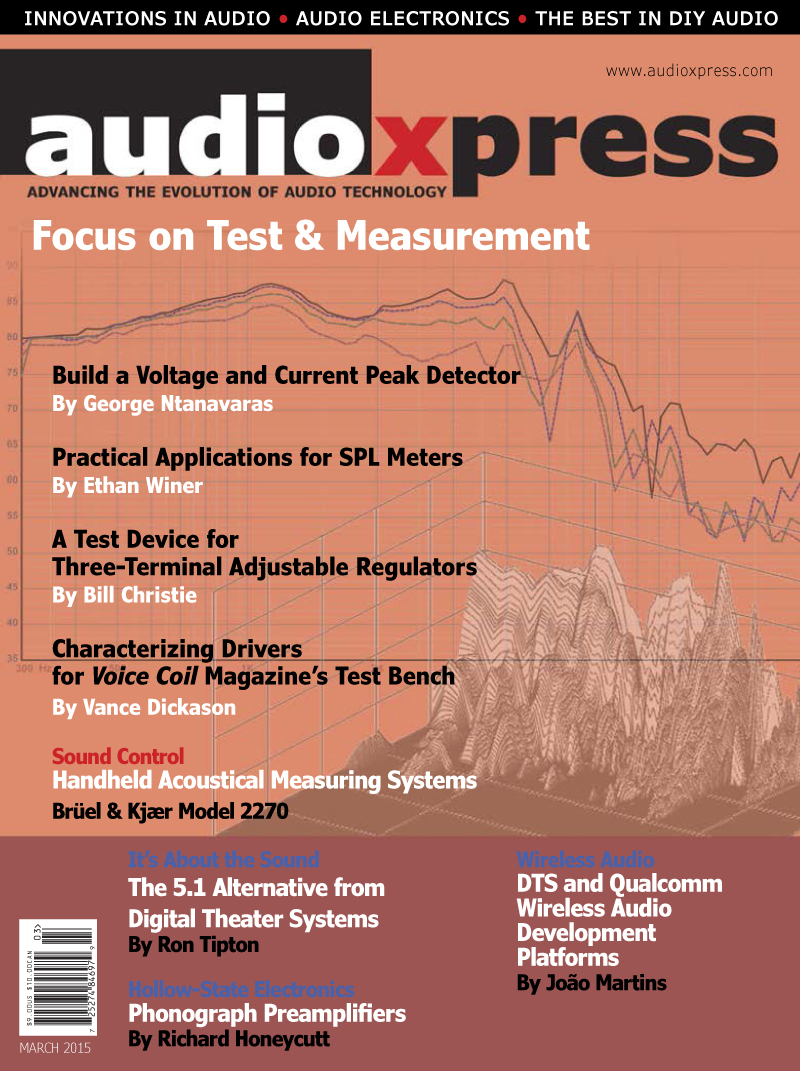 For our March 2015 edition, we have selected a series of articles dedicated to Test & Measurement, both from a practical and a DIY perspective.

The first article is Ethan Winer’s (re)take on Practical Applications for SPL Meters. Following his original 2008 essay on sound pressure level (SPL) meters, Ethan considers some practical applications for a basic SPL meter, such as calibrating loudspeaker levels and measuring room acoustics, using a simple Galaxy Audio CM-130 SPL Meter as an example. He then moves on to a more sophisticated model, the NTI Audio XL2.


Our DIY section includes two simple but interesting projects, which can both be useful additions to anyone’s arsenal and also great fun to build. The first project is from George Ntanavaras and is a simple portable device that can help determine peak voltage and peak current requirements and whether or not our power amplifier is capable of driving our loudspeaker without clipping. The second DIY project was written by Bill Christie and is a test device for three-terminal adjustable regulators, specifically the LM317 and the LM337.

And because this is our Test & Measurement edition, in their “Headsets” column, Mike Klasco and Steve Tatarunis discuss Headphone Testing issues that are common to all types of wired headphones, while Richard Honeycutt follows with a second article on Handheld Acoustical Measuring Systems, this month dedicated to the sophisticated Brüel and Kjaer Model 2270 multifunction analyzer.

Our Standards Review article continues to examine the development platforms currently available for wireless audio implementations. In this month’s article, we discuss DTS and Qualcomm Wireless Audio — two companies with different roots and strategies, now converging on the wireless audio market. DTS Play-Fi was launched in October 2012, while Qualcomm proposed the most recent technology platform for wireless multiroom audio in January 2014.

As usual, your new issue of audioXpress is now available at www.gotomyxpress.com
To become a member, visit www.audioxpress.com/page/audioXpress-Subscription-Services.html
You can also buy a single printed issue at www.cc-webshop.com
related items