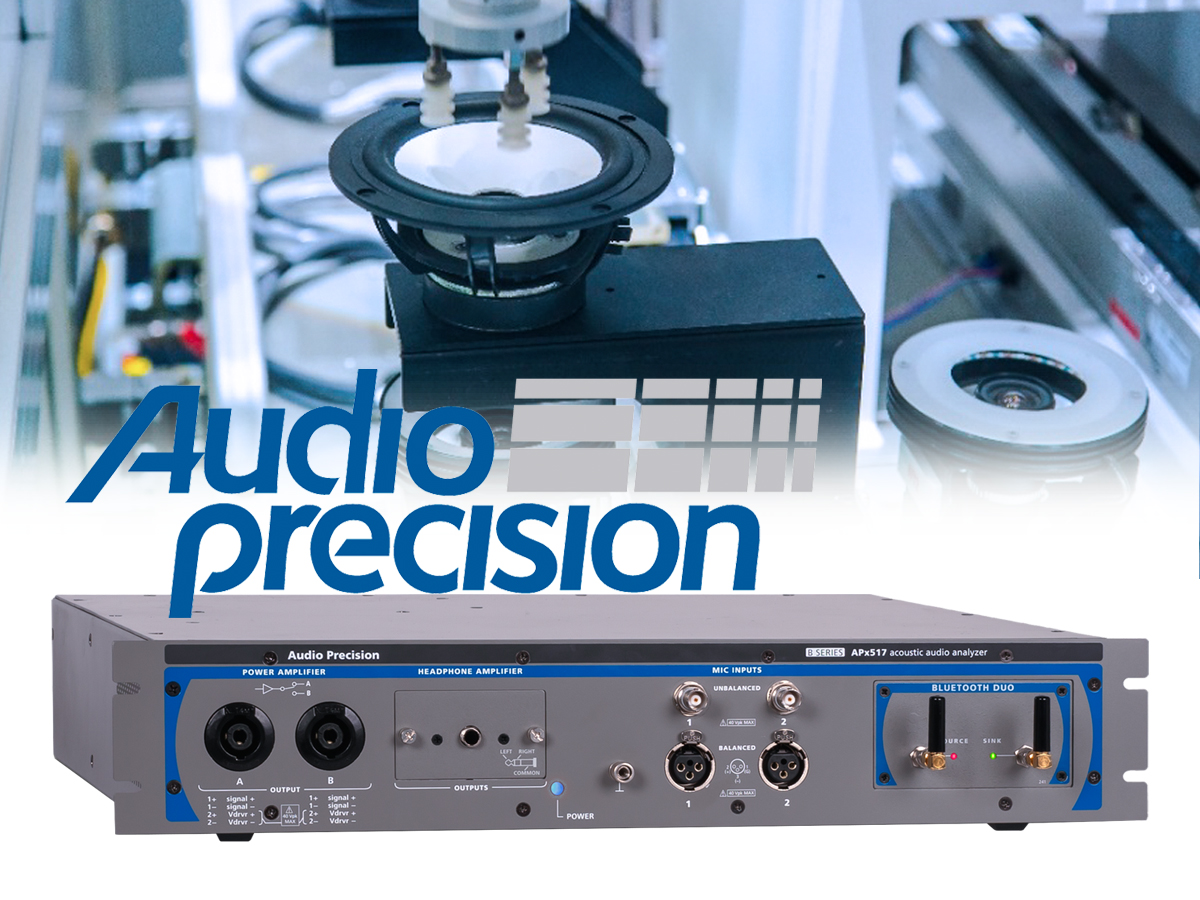 Audio Precision's reputation for audio test and measurement, particularly for R&D duties, is undisputed and is frequently the choice for reference measurements at any stage, from scientific research to manufacturers labs and factories. For less critical applications like testing low-end consumer electronics, portable use, and occasional audio measurement tasks, Audio Precision recently launched its APx500 Flex, combining the capabilities and flexibility of APx software with ASIO-capable third-party audio interfaces to create a more cost-effective solution. The APx500 Flex solution allows users to leverage test development done in the R&D cycle through the ability to import project and template files developed for AP hardware analyzers, thereby reducing test development time and maintaining consistency in test methodology across the organization.

Still, in measurement scenarios where hardware performance requirements and calibration are important such as for production line test of speakers, headphones and microphones, another type of approach was required. While the APx500 Flex project was extremely successful for Audio Precision, the Oregon-based company was already working intensely on an optimized solution that would drastically reduce setup time, while offering the renowned AP reliability and quality — at a production test price. The result is now market ready in the form of the new APx517B Acoustic Analyzer, engineered to the same standard as all other APx analyzers.
Measure and Repeat
On a production line, any time spent setting up a new test system, calibrating a system for a new shift, or reconfiguring a system for a change in DUT (device under test), is effectively a "line down" situation. As an integrated system combining audio analyzer (signal generation and acquisition), power amplifier, headphone amplifier, and microphone power supply, along with any required digital interface such as Bluetooth, the APx517B has the power to drastically reduce setup and reconfiguration time by eliminating multiple individual components (from a variety of vendors) and their associated cabling. Additionally, and unlike those individual components, the APx517B is uniquely delivered with an accredited ISO/IEC 17025 calibration.

Most, if not all, current acoustic analysis systems are an assortment of individual components from different vendors. As such, an additional “line down” risk of these systems is the quality and reliability of each component, along with the configuration of each connection point. In contrast, the APx517B is an integrated system engineered and assembled to the same standard as all other APx analyzers and is delivered with a three-year warranty and accredited calibration. For 36 years, the equal to AP analyzers' reputation for performance and measurement accuracy is the long-standing recognition of their quality and reliability.

In addition to its ability to significantly impact the time component, the APx517B offer AP performance at a production test price. The base model, presented at a competitive MSRP of $6,000 USD, delivers measurement capability for the functional test of headphones, speakers, drivers and microphones. Configuring the system for specific DUT, interface or measurement requirements is equally affordable for manufacturers. From base model to more advanced configurations, the APx517 is priced to compete with systems assembled from separate software, soundcard, amplifiers, mic power supplies and digital interface devices, even while eliminating the extra time needed to assemble such systems. 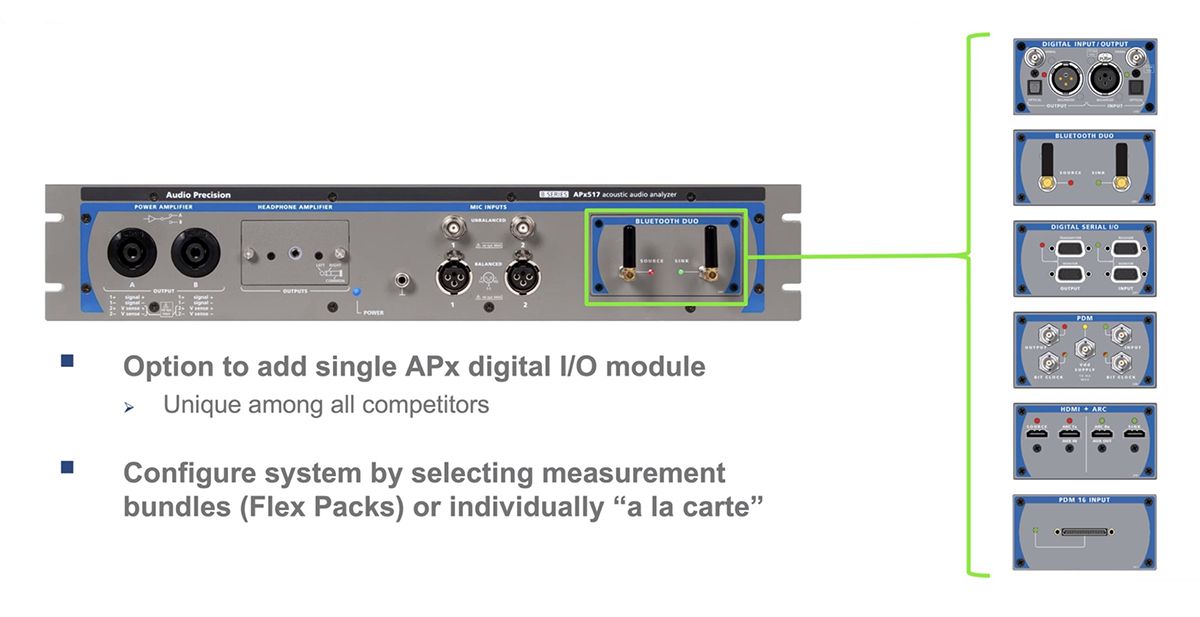 Configuration & Options
The APx517B maintains the APx Series' tradition of flexibility and configurability. In its base configuration, the APx517B is a ready-to-go system for measuring analog speakers, microphones, headphones, or headsets. For digital devices, the APx517B has a module slot for the addition of a single APx digital interface module, such as Bluetooth, PDM or HDMI. On the software side, a standard system provides a core set of measurements and functionality to allow out-of-the-box, fundamental test of acoustic devices: File Analysis, Sequence Mode, Input Signal Monitors (including FFT Monitor), Level & Gain, THD+N, Loudspeaker Product Test (including Rub & Buzz), Stepped Frequency Sweep, Pass / Fail, and Signal Acquisition measurement.

Since Audio Precision is part of Battery Ventures, the company who also acquired Denmark-based GRAS Sound , the solution will also be available as an integrated acoustic analysis system with measurement microphones and other products from the prestigious manufacturer.

As the company did with the APx500 Flex, a trio of Flex Packs is available, each offering different groups of more advanced measurements. Perceptual audio measurements — including ABC-MRT and POLQA — can likewise be used with Flex. Finally, for the user that needs the base configuration plus just one or two more measurements, à la carte menu of measurements is likewise available.

"Production, or manufacturing, test is an application with its own unique challenges that, simply put, are time, reliability and cost," states Daniel Knighten, Audio Precision General Manager. "The APx517B acoustic analyzer, is purpose-built to address those challenges — drastically reducing setup and reconfiguration time, delivering AP quality and reliability, configured and priced specifically for the manufacturing line —and thus redefine acoustic production test."

The APx517B acoustic analyzer is available now, with the base configuration retailing for US $6,000. APx500 software release 6.0.1 is also available for download by APx B Series or Legacy analyzer users with a valid 6.0 license and is compatible with all analyzers in the APx500 Series (Note: an APx KeyBox is required to run v6.0 on Legacy APx analyzers). As with all other new APx analyzers, the APx517B ships with version 6.0.1 software and one year of software maintenance, effectively licensing that instrument for APx version 7.0 when it is released, as well as any minor releases that occur between versions 6.0 and 7.0.
www.ap.com