Read the latest updates, including about the exciting Product Development Track. 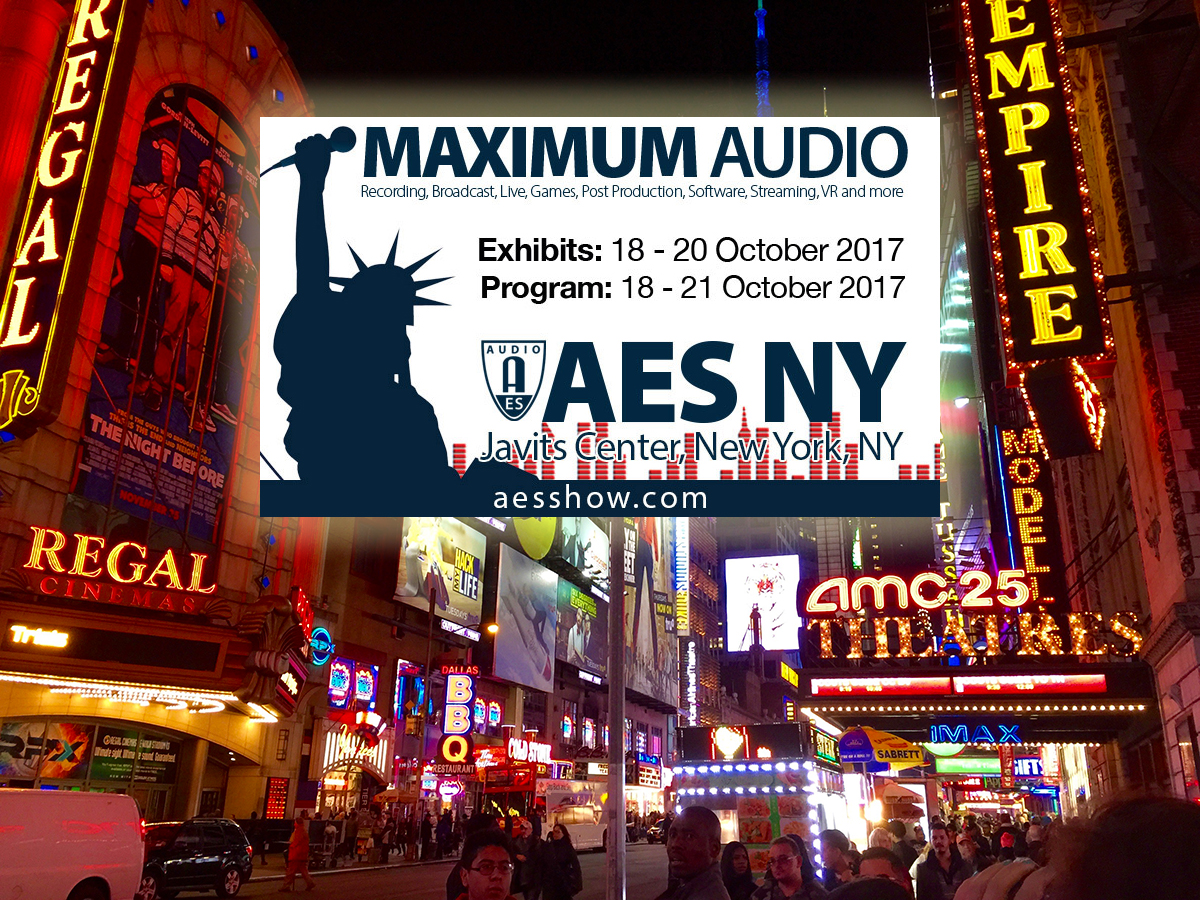 Celebrating its 70th Anniversary Year, the Audio Engineering Society is gearing up for its 143rd International AES Convention (www.aesshow.com), taking place October 18 to 21, 2017 (exhibits October 18-20, technical program October 18-21), at the Jacob Javits Center in New York City. This will be the largest professional audio education, networking and gear exhibition the AES ever promoted, featuring a comprehensive and expansive professional media and entertainment production program, three full days of pro audio gear exhibitions and presentations, and a world-class series of events and experiences 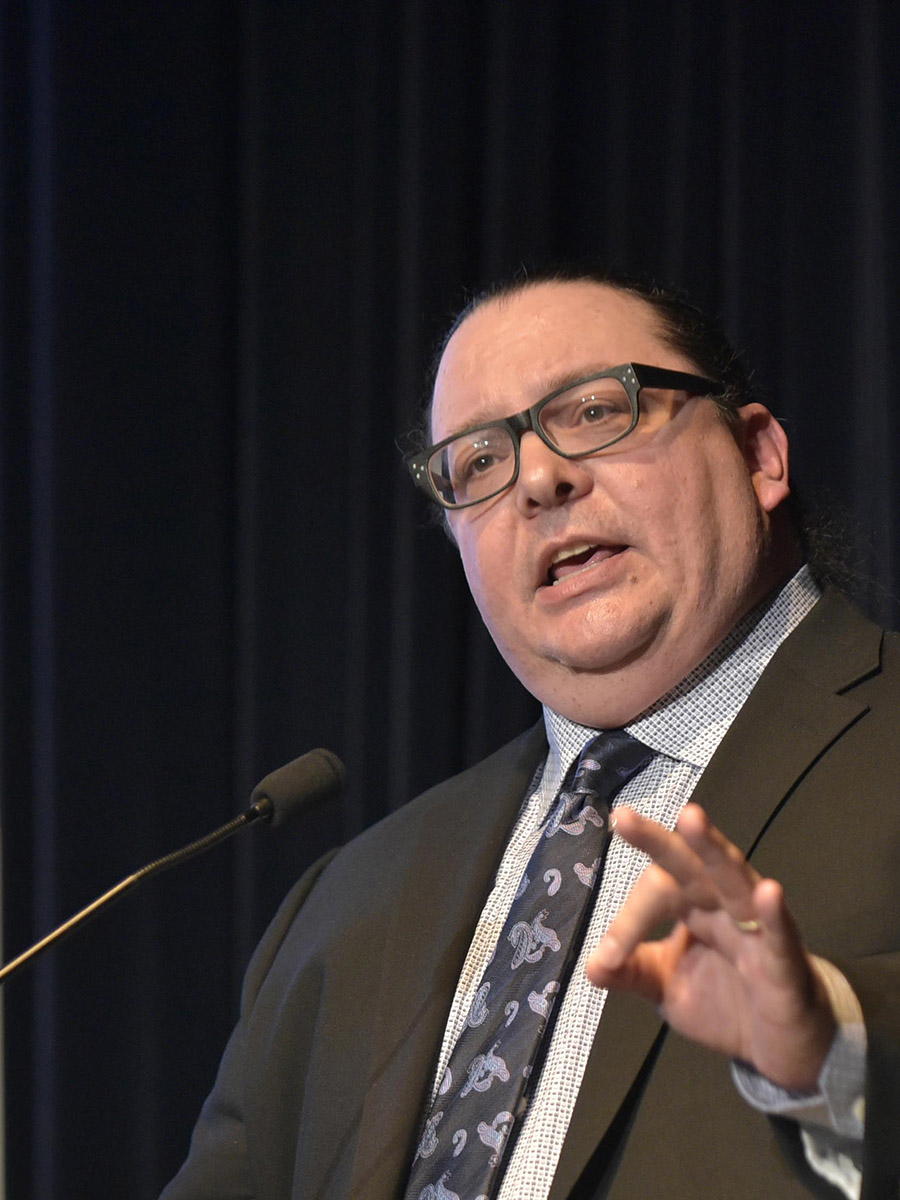 Three-quarters through his term as AES president, Alex Case is shepherding the results of 18 months of strategic analysis and planning begun during the term of his fellow Executive Committee member and immediate Past President John Krivit. Recent announcements from the Society that highlight new initiatives and strategic alliances include the co-location of AES’s 2017 and 2018 fall U.S.A. conventions with the National Association of Broadcasters’ NAB New York Show events, and in January 2018, the inaugural AES@NAMM Pro Sound Symposium: Live and Studio.

“As we approach our 70th anniversary year, the Audio Engineering Society is involved in more events, in more locations, than ever,” says AES President Alex Case. “From our international Conventions in the USA and Europe, our international conference series, regional events in a number of countries through to local section meetings, the AES continues its core mission: promoting the science and practice of audio.”

In October, AES NY 2017 will take place in an adjacent hall to the 2017 NAB New York Show (October 18-19) in the Jacob Javits Convention Center in Manhattan. Each of these events has a similar footprint of exhibition space, with over 300 exhibitors each, though a minimal overlap of the exhibitor pool. “As video-based production incorporates audio by its very nature,” notes Case, “and with multimedia production becoming increasingly important for even music distribution, media professionals are discovering the need to work across disciplines. The focus of the NAB New York Show is video production. With AES’s audio-centric exhibitors and technical program, the co-location of the events is a natural fit for today’s media production professional.”

“Everyone wins in this scenario,” says Case. “When you register for the AES exhibition, you double your opportunities. Individual participants and exhibitors alike can interface and network with a combined base expected to top 30,000 registrants. Of course, the famous portfolio of technical program events – papers, tutorials, workshops, career and education and more – remains available to AES All Access registrants.”

While the West Coast has been on a bi-annual AES convention schedule with New York City since the Society transitioned from two annual U.S.A. conventions to one in 1985, the commitment to hold the AES’s U.S.A. convention in New York in 2017 and 2018 “doesn’t mean that AES is abandoning the West Coast,” says Case. “Our AES International Conference on Automotive Audio takes place near Silicon Valley this fall (September 2017), and more events are in the works.” 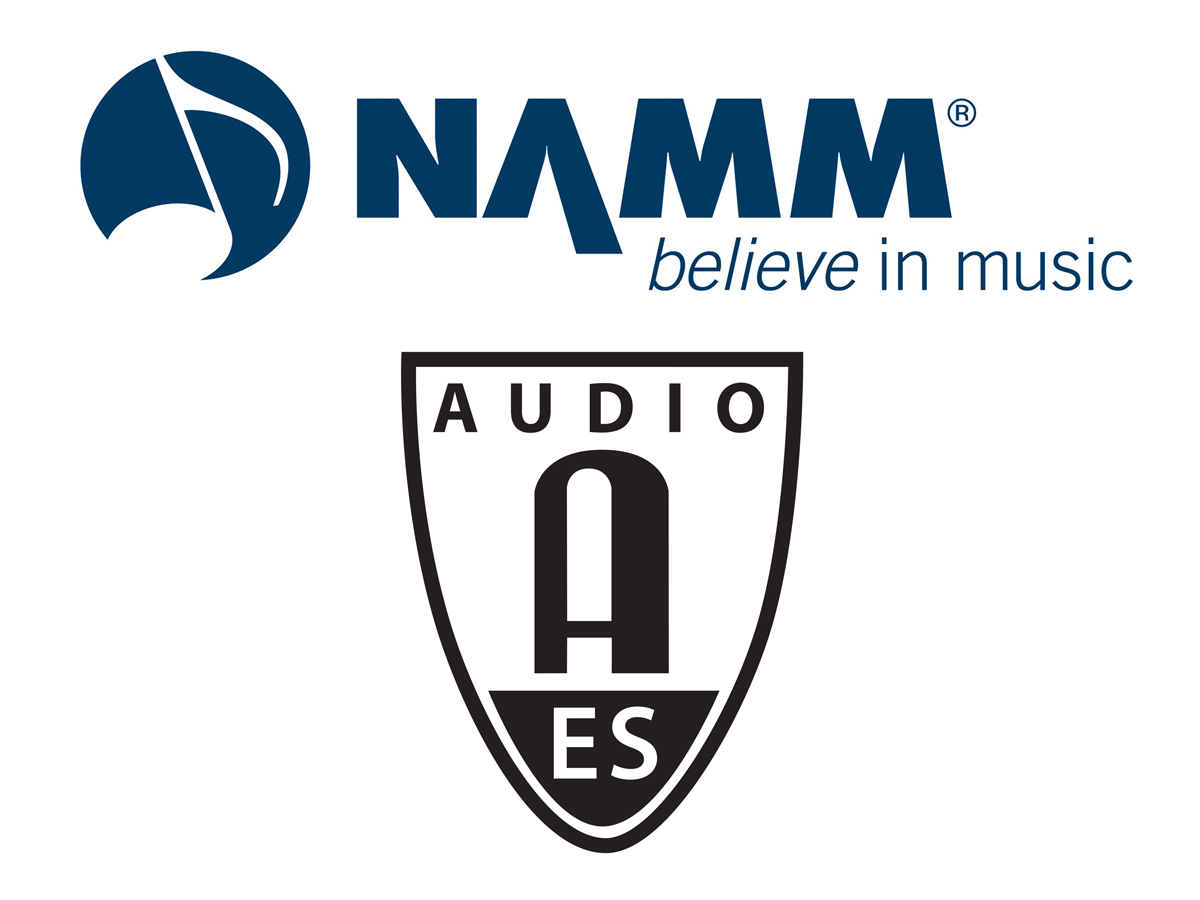 “Our West Coast presence in 2018 begins with the new AES@NAMM event,” Case continues, “which will be educational, informational, aspirational and inspirational.” The full title “AES@NAMM Pro Sound Symposium: Live and Studio” shares and underscores the event’s scope. The resulting AES@NAMM is being launched coincident with the expansion of the Anaheim Convention Center. At NAMM 2018, the new ACC-North Hall will host a growing list of professional audio and related exhibitors. The ACC-North Hall is connected by sky bridge to the rest of the ACC, and it sits adjacent to the Anaheim Hilton Hotel. The Hilton’s fourth floor will be the site of most AES@NAMM activities and sessions.

The emphasis of AES@NAMM will be on technology and its practical application in performance and studio audio and live sound. Education and training will be provided through a host of workshops, tutorials and demonstrations, many including attendance certification. “AES@NAMM will be fee-based, just as our regular Technical Sessions are at all AES Conferences and Conventions worldwide,” elaborates AES President-Elect David Scheirman, who will take office as President shortly before the event. “AES@NAMM attendees can elect to purchase single-session tickets, half-day or whole-day badges, and 2-3-4 day ‘all-in’ badges with a laddered fee schedule based on their session attendance selections. Every AES@NAMM registrant will receive a NAMM show badge with full access to that organization’s exhibits and other activities in addition to the AES@NAMM program.”

AES@NAMM will serve working audio professionals as well as entry-level and aspirational audio enthusiasts, across a broad range of disciplines. AES@NAMM attendees will help provide NAMM its desired expansion of audio professionals at the NAMM Show. NAMM exhibitors, many of whom exhibit at both the AES Conventions and the NAMM Show, will also benefit from this increased professional end-user presence onsite.
“Each of these events represents acknowledgement of the leadership role of AES members in defining audio technology and in sharing their knowledge and its practical application to the industry at large,” says Case. “Our strength is in our membership. As evidenced by these new cooperative ventures, the expertise of our membership is a valuable resource to everyone interested in audio.”

“AES serves as an anchor membership for many who are also members of other specialized professional organizations such as IEEE, SMPTE and the Acoustical Society of America,” elaborates Scheirman. “AES is the rallying point for those serious about audio of whatever specialization.”

As Alex Case prepares to hand the AES Presidency to Scheirman in late October, at the beginning of the 2017-2018 term, Case notes that the path forward from current plans is a constant work-in-progress. “From the inspiration that comes from our local sections – all around the world – that serve as creative incubators of new ideas and experimentation, to the marketplace and technological leadership of our Convention and Conference Committees and the topical committees that make up the AES Technical Council,” he says, “the AES is constantly evaluating the needs of our membership and the interests of the broader industry. Those needs drive refinement of our diverse event portfolio. This evolution of the Society positions us to maintain our role as the world authority in audio technology and education, advancing audio globally.”

143rd International AES Convention
For the 2017 Audio Engineering Society New York Convention, in addition to the increasingly popular Project Studio Expo and Live Sound Expo, along with New York’s own Broadway Sound Expo, new events were added to the complement of exhibition floor activities including the Broadcast Audio Expo sessions. As one of the pioneers in the interoperability of networking protocols, AES will host a special insight panel that will look into the current and future of AoIP and transport systems. The Broadcast Audio Expo is being held in partnership with sponsors Yamaha, Neumann/Sennheiser and Calrec. 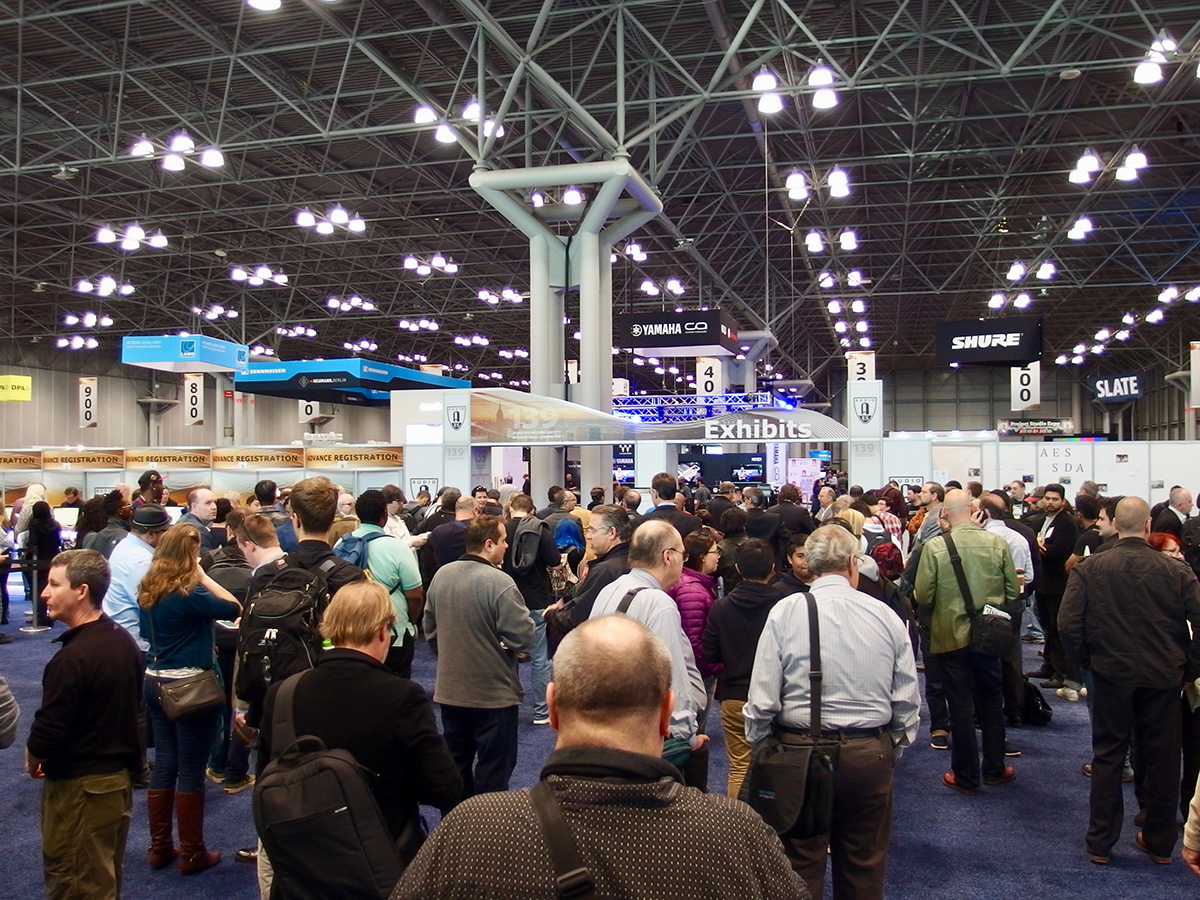 Audio 4 VR is a two-day event with focused product sessions and updates continuing forward from the 2016 AVAR International Conference. The Audio 4 VR stage is situated at the front of the exhibit hall, adjacent to the VR demo areas. Produced in partnership with IMSTA, Software@aes is a pavilion of exhibitors and a day of sessions. With a focus on DAW and Plug-in software, the pavilion features leading manufacturers exhibiting together next to the session stage. Also being introduced are the Mix with the Masters Mixing Workshops at AES. With three days of mixing workshops from twenty of the top producers and mixers in the world, this area is sure to be a crowd magnet!

“AES Conventions have a rich tradition of driving progress in audio technology and application," notes AES Executive Director Bob Moses. “While this year’s convention takes place alongside the NAB Show New York, it remains an independent gathering of a global community of audio professionals and students – end users, manufacturers, researchers and scientists. The NAB Show New York is focused on the production and distribution of mainly video content. It's a natural fit that these two organizations collaborate and cross-pollinate, developing new workflows and business models and creating new opportunities for our communities.”
www.aes.org 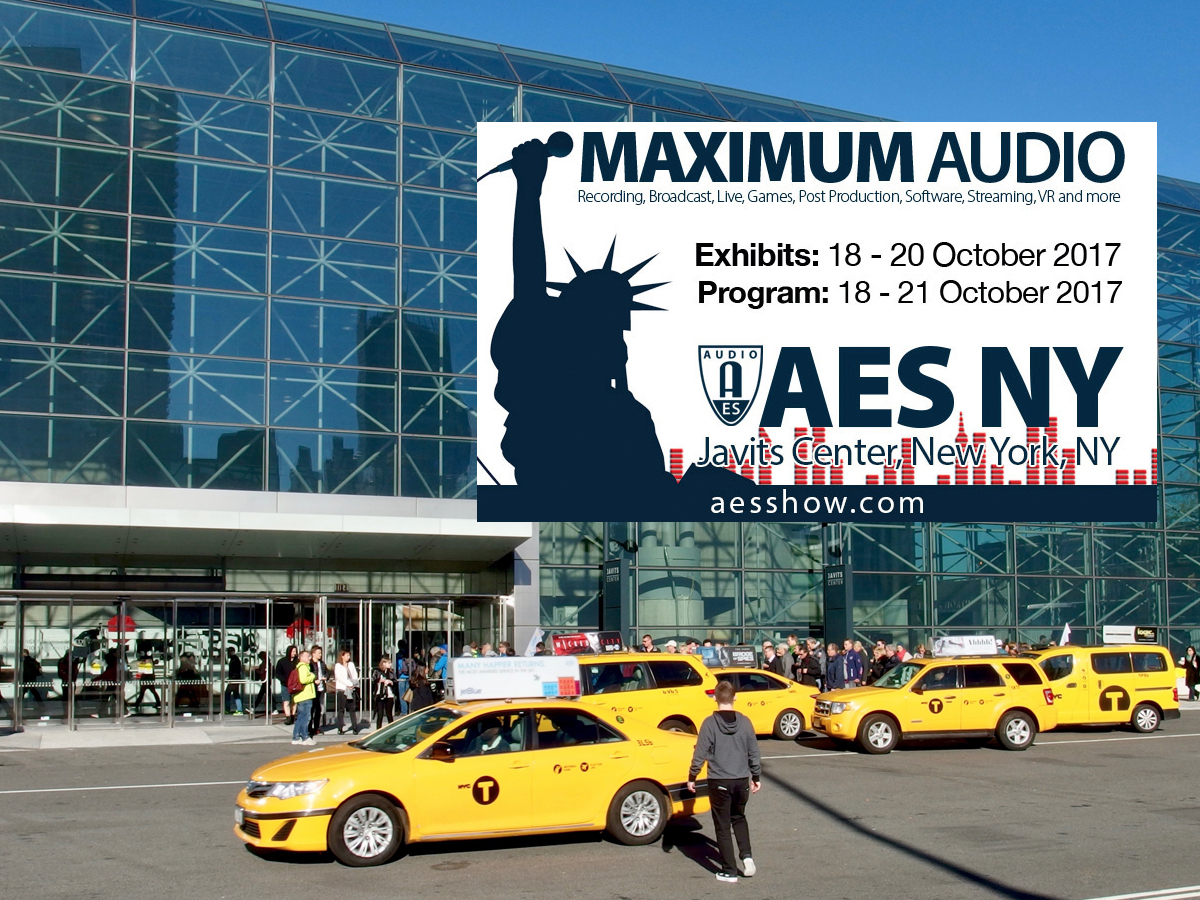